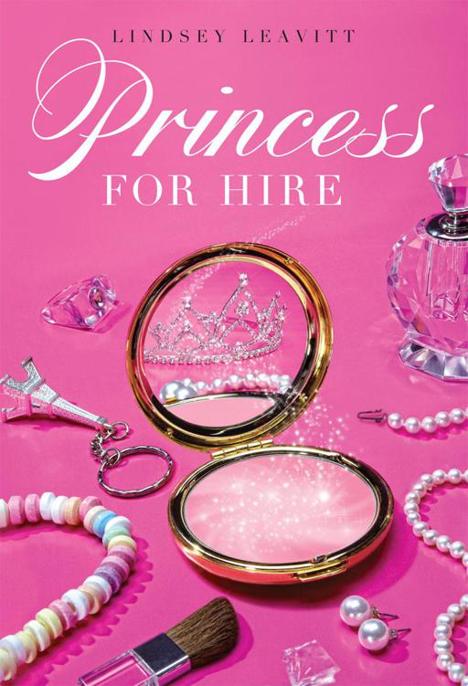 Copyright © 2011 by Lindsey Leavitt All rights reserved. Published by Disney • Hyperion Books, an imprint of Disney Book Group. No part of this book may be reproduced or transmitted in any form or by any means, electronic or mechanical, including photocopying, recording, or by any information storage and retrieval system, without written permission from the publisher. For information address Disney • Hyperion Books, 114 Fifth Avenue, New York, New York 10011-5690.

For Rylee and Talin,

I
f my life were made into a movie—
The Desi Bascomb Story Revealed
—I’d use artistic license to make a few minor changes. Like switch the setting to somewhere besides Sproutville, home of the Idaho Potato Days Festival. And rewind back to the forties or fifties, a time of flowing head scarves, glamour, and what’s-wrong-with-butter? cuisine. And cast Audrey Hepburn to play me (or a young Julie Andrews if Audrey was on another project). Oh yeah—I’d also give the director some small suggestions, just to add a little sparkle to the otherwise tragic script.

But hey. There was one perk to wearing a six-pound groundhog head: while coupon-shoving and toddler-hugging and paw-waving on behalf of Pets Charming pet store, I could stare at anyone in the mall and all they saw was Gladys the Groundhog’s permanent smile. So my anguish was perfectly hidden when I spotted the recently crowned Miss Sproutville Spud Princess herself, Celeste Juniper, flirting by the mall fountain with my four-year crush, Hayden Garrison.

Ah, Hayden
. My fourth-grade secret online Boggle sweetheart and the cutest boy in Sproutville. Even though he was more than thirty feet away, the heat in my costume shot up a few thousand degrees, which would’ve happened even in the middle of an Idaho winter. You know the late actor Paul Newman? Way back in the day, before he was on the salad dressing labels, he had this wavy hair with steel blue eyes and a swoonworthy smile, and…that’s Hayden. Well, a thirteen-year-old version.

Celeste squealed while Hayden rifled through her shopping bags, which, knowing her, were filled with expensive, tacky junk, like DADDY’S PRINCESS T-shirts. Laughing, Hayden dug out a pink feathered purse that had no doubt cost a flamingo its life. When Celeste’s glossed lips settled into a pout, Hayden apologized and told her she could pull it off because she was the closest thing to royalty we had at Walter B. Sprout Junior High. She could even wear the purse on her delicate wrist as she waved to the masses lining Main Street for the annual Idaho Potato Days parade tomorrow.

I looked away from the lovebirds. Winston, a bull terrier with beady eyes and foul breath, scratched the display glass and whimpered. He’d be graduating from puppy to dog very soon and still hadn’t been adopted, poor guy. Sure, he wasn’t the cutest doggy in the window, but he had a loyal charm. When he closed his mouth.

“Seriously, Winston. What is Hayden
thinking
?”

He cocked his head in sympathy, then noticed his tail and started chasing it.

I glanced back at the fountain. Oh no. Celeste, with her heart-shaped face and potato-fed freshness (that did not, I should add, match her less than sparkling personality), was headed my way! Any hope for social success next year would shrink to the size of her waist if she discovered me. I’d be lucky to reach school mascot level.

Celeste tapped her finger against the Pets Charming puppy display window. Hayden jogged up behind her. She leaned into him and sighed, “Aren’t they sooooooo cute?”

“Not as cute as you.” Hayden instinctively flinched at his own lame line.

If he had said those words to someone else, it could have been sweet. Sweeter still if he was talking to me. I allowed myself a second to pretend he was.

“No, you’re cute,” I would whisper from behind my locker door in the eighth grade hallway, where Hayden would meet me after every class.

“No,
you
are,” Hayden would say, looking sporty and gorgeous in his soccer jersey.

Then I would toss my suddenly bouncy hair and tilt my head at a flirty angle. “We’re perfect, aren’t we?” I’d ask.

“Ex-cuse me?” Celeste interrupted my daydream with a sharp finger snap in my face. Well, in Gladys the Groundhog’s face. “Are these puppies for rent?”

“Don’t you…” I coughed and tried again in a squeakier, hopefully unrecognizable voice. “Don’t you mean for sale?”

Celeste rolled her eyes, yet the clumps in her mascara managed to stay put. “No, I mean for rent. For like a month.” She scrunched up her nose. “I hate when puppies grow into big, nasty dogs. Like that.” She pointed at Winston. “Why can’t everything just stay little and cute?”

What an ageist load of bunk. Winston could totally hear her! If only he could breathe on her. “Umm…no. We only
sell
puppies,” I said. “No rentals, though you might want to try Toy Warehouse. I hear they got a new shipment of Mr. Potty Puppies. Mr. Potty Puppy never turns into a dog. But he never gets potty trained either.”

Celeste chewed her bottom lip. “You’re just cranky because you’re stuck in that stupid chipmunk costume that isn’t even long enough, and your job stinks.”

“Chipmunk? It’s a groundhog,” I said too loudly, my anger getting in the way of my judgment. “Don’t you know your rodents?”

“Rodents? Hmmm. You remind me of someone.”

Oh no. I tugged my head on tighter and turned toward Winston, like hiding Gladys’s face could possibly save me at that moment.

“This pathetic girl who’s always trying out for the school plays, but of course she never makes it because she’s just too…awkward. Know her?” She glanced at Hayden, then pinned her eyes back on me. “We call her Ditzy.”

My face burned behind Gladys’s smile. Desi. My name is Desi. And you know that, Celeste. Or you did, back when we were best friends. Back in elementary school when we had Alfred Hitchcock marathons and accidentally dyed each other’s hair orange and read our darkest secrets to each other and buried them in my backyard. Before you won a beauty pageant and turned into Princess Popular.

Before you completed Operation Crush Desi’s Heart by going after Hayden.

Celeste tossed her highlighted curls. “You know her. She makes her own T-shirts that say stupid things no one understands just so she can prove she’s smart. Big forehead…” Celeste sneered at my shoes. “Big feet.”

Oh man, oh man. Please don’t do this. Please don’t embarrass me in front of Hayden. Send me to the stocks if you have to. Bleach my hair orange again. But leave Hayden out of this.

“How do you know Desi?” Celeste asked.

“Desi. Right. We sit by each other in English. I copy off her paper sometimes.” Hayden stuck his hands into the pockets of his blue Bermuda shorts. “Let’s go. I wanna get a smoothie.”

Yeah, one more poke in my barely beating heart. Copy? I tutor! So maybe sometimes I get frustrated when he doesn’t get it, and just hand over my paper. But he plays soccer like EVERY night, and that has to be exhausting. And it’s only for big tests. And quizzes. Some work sheets…

Didn’t someone once say copying is the highest form of flattery?

“Yummy. A smoothie.” Celeste smacked her gum. “And thanks for your help. Oops, it looks like your head is crooked.”

I grabbed the groundhog head. “No, it’s fine. Er…thanks.”

“Let me just…” Celeste yanked it off, confirming my identity. Steam poured out of the suit. My hair stuck to my face. Tears stung my eyes.

Celeste blew a tropical fruit–scented bubble in my face. It popped, just like my hopes for eighth grade.

Hayden kindly shifted his gaze to Winston. “Whatever, Celeste. I’m getting a drink.” He gave me a quick nod of acknowledgment, like
that
helped right now, and headed to the Smoothie Shack a few shops down.

I wanted to scream at Celeste. To ask her how someone who used to be so nice could act so cruel. Tell her that for a teen princess, she had zippo class. But all I got out was, “Why?”

“Wait for me,” she called to Hayden. “Oh. Here’s your dome back, Ditzy.” Celeste shoved the head against my chest. “Guess being a rat runs in the family.”

I
would have walked out right then, but I’m not a quitter. I’m actually more of a crier. I hid by the reptile tanks and let it flow.

A rat. How clever. It’s true, Celeste’s cruelty wasn’t completely random. The summer before seventh grade, my dad, the newly appointed Fredonia County prosecuting attorney (big title, little pay), argued the court case that landed Celeste’s dad in jail. Forget that her dad was defrauding people on fake land sales, or even that my dad was just doing his job. Forget that her dad got out in no time and was now enjoying early retirement in the Bahamas. Forget that her mom had filed for divorce even before her dad got caught, then remarried the richest cattle guy in three counties. Celeste was done with me and convinced our whole group of friends that they were too. Maybe farm living had seeped into everyone’s brains, making them think like sheep.
Bah
. Follow Celeste. Shun Desi!
Baaahhh!

I wiped my nose on my fuzzy sleeve. I know it’s shallow, but right then I really wished we were rich. Rich girls don’t have to dress as rodents for their college money or, as Dad says, “to build moral character.” No sooner had the state passed the “Idaho Future Leaders Apprenticeship Program”—which basically legalized child labor—than my dad got me an application for eligibility. Because I’d be turning fourteen in a couple of months, I qualified. Farewell, childhood.

I tried to get a job at Cunningham Horse Stables, picturing myself all Katharine Hepburn–esque as I groomed the purebred horses. But when I showed up for the group interview, half a dozen girls in expensive equestrian gear literally gasped at my specially made (and super cute, what’s their deal?)
HOLD YOUR HORSES
T-shirt. It wasn’t a big shocker that they never called me back.

After that (and my failure to convince Dad to invest in screen printing supplies for my struggling T-shirt design business), I had a choice. Either dig up bait worms to sell for two bucks a pound, or comb Sproutville for places that were A) hiring, and B) participated in the new child labor program. Which narrowed it down to one.

Pets Charming. In the aquarium across from my little hiding spot, two dime-priced goldfish bobbed stiffly, dead. Above them, hamster wheels spilled from a sagging cardboard box. The snake staring at me from a cracked tank was one shed skin away from joining the floating fish in pet store heaven. And I, Gladys the Groundhog, wept for us all.

“Okay, take your break.” My manager, Drake, sighed and pointed to the back room.

“Look at you. You’re scaring the snakes.”

I trudged to the back of the store, and Drake followed. It only added to my pain that a twenty-five-yearold high school dropout with unintentional dreads and a distinct catnip odor questioned my work ethic.

“I’m fine, Drake.” I tugged off the head. “Sometimes this suit just…gets to me.”