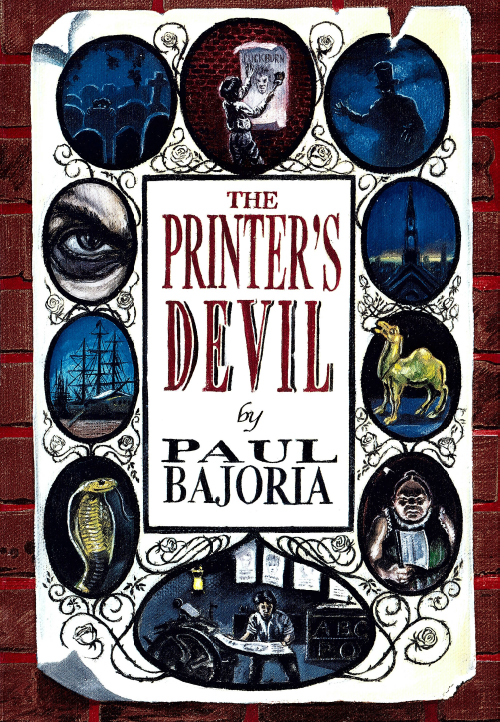 To Mum and Dad
with infinite love and thanks

4 THE SUN OF CALCUTTA

10 THE MAN FROM CALCUTTA MOVES FAST

A Preview of
THE GOD OF MISCHIEF 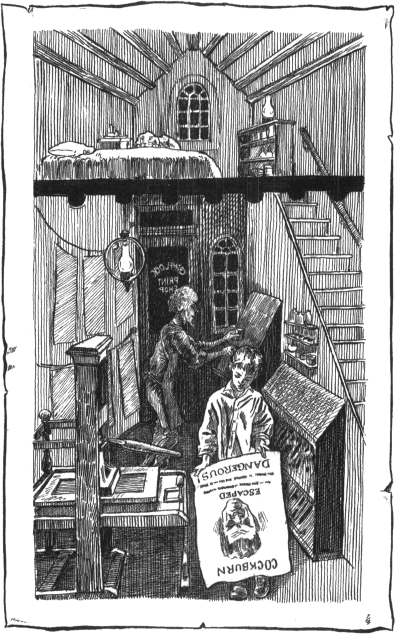 He was the ugliest, most evil-looking man I’d ever seen.

He glared up at me from the poster, his outline glistening as the ink dried, making him seem more alive and threatening. I
held him out at arm’s length to stop him from creasing.

I scanned his name, mouthing it as I assessed the big black letters. Were they straight enough? The top part of the “R” hadn’t
quite come out properly. Nevertheless, the effect was striking; and, although I felt slightly afraid of the vile-eyed villain,
who seemed to strain to clamber out of the picture and throttle me, I was quite proud of my handiwork. After all, I told myself,
if the poster scared people they’d be all the
more likely to try to help catch him.

The exclamation point, I noticed, was a bit lopsided. I’d have to go back and straighten the type before I did any more.

ESCAPED
from our NEW PRISON at CLERKENWELL, the 14th day of MAY.
The Public is ADVISED that this Man IS VERY
DANGEROUS!

Being a printer’s boy was hard work. I had to run errands, and do all the boring and dirty jobs, and Mr. Cramplock only paid me a couple of shillings a week, which wasn’t much.
But the good part of it was that our shop was the first place people came when they had any information to pass on, so Cramplock
and I found out about it before anybody else. We were always making posters and handbills and books and newspapers, informing
people of what was going on in the world. If there was any meeting called, or play to be performed, or auction to be held,
or curious object to be displayed, or items stolen, or convicts escaped, or persons to be hanged, or corpses found drowned,
or loved ones gone missing, chances were we’d know about it. It used to make me feel quietly important, walking through the
streets of London and repeatedly seeing the huge inky letters of my own posters plastered across brick walls and wooden fences.
They made people happy, and curious, and afraid; they made people talk. It felt as though things
happened
because of what I did.

The printer’s devil, they used to call me. I had short black hair and a dirty face, usually, because of all the ink that got
splashed around everywhere in the workshop; underneath the ink my skin was brown from the summer sun. I was rake-thin, in
those days, and I usually worked in long breeches which didn’t fit very well round my waist so I had to keep hitching them
up, especially when I was running. “Here comes the printer’s
devil,” people would say. At first I used to think it wasn’t a very nice thing to call someone, but no one seemed to mean
any malice by it, and I soon got used to it.

“Secure that exclamation-mark, Mog,” Cramplock said, appearing at my side and surveying the poster.

“Don’t he look mean, Mr. Cramplock?” I said, rather admiringly, as I held up the big poster again.

“Murderous, Mog, mmm. Mur — derous!” He repeated the word with some relish, peering over his spectacles approvingly.

“What did he do, Mr. Cramplock?
Did
he murder someone?” I asked eagerly. I was hoping fervently that he had, until it occurred to me I probably shouldn’t be
hoping such things.

“IS VERY DANGEROUS!” I read again, before laying the poster aside. As I placed it on the table, the paper bent slightly in
the middle, so the convict seemed to be leaning forward deliberately to menace me with his broad, clenched face. His eyes,
although quite small, like unwelcome little black blemishes on the paper, were by far the most prominent feature of his face;
and they held me with a vicious stare. I’d never forget
this
face, I told myself, nor that name etched in heavy letters by chunks of black iron pushed into the coarse white paper.

“Cock,” I said slowly, “Burn.” And the eyes of the escaped convict flashed, as if in recognition of his name; as if there
were indeed something burning behind them, a kind of sinister flame.

Almost expecting to see him creeping up on us from behind, I looked around the shop nervously. “You don’t suppose he’s hiding
near here, do you, Mr. Cramplock?”

Cramplock laughed shortly. “If he’s got any sense, he’ll have fled a lot farther off than this.”

He turned away, tugging at the grubby collar of his shirt to let some cool air inside. It was the hottest week of the year
so far: in fact, we were having the hottest weather I could remember in my entire life, and working the presses was hard and
sticky work, so that our shirts were damp and both our faces glistened with sweat as we worked. Cramplock rubbed his cheekbone
just beneath the rim of his glasses with an inky finger, a habit he’d had for as long as I’d known him. He always had a smear
of printer’s ink on his cheek, like a bruise; and today when he rubbed his face, his finger came away wet.

“Phew … it’s hot work again today,” he said, breathing heavily. “Only May, and look at it. If it keeps this up, we’re in for
quite a summer. Even though we’ve got Winter inside. Eh?”

It was a joke. He used to make it quite frequently,
in one form or another. My name, you see, is Winter. Mog Winter. People sometimes said it was a peculiar name to have, but
it’s always suited me fine. Sometimes in the print shop when there was nothing else to do, I used to make up a form with just
my name in, and print my name on old scraps of paper. Sometimes I used three big capitals,
M O G
, sometimes a capital and two lower-case ones,
Mog
, and sometimes I’d bring out the fancy type which made the letters look
as though they were written with a quill-pen rather than printed.
Mog
. I used to stare at my name on the paper for ages. After a while, it didn’t seem like my name at all: it was as though I’d
never seen it before, the letters just meaningless marks which didn’t spell anything. I had quite a collection of these various
Mogs by now: Cramplock probably wouldn’t have been very pleased if he’d found out I was using up paper like this, but I somehow
couldn’t bring myself to throw them away.

I wasn’t going to have time for such idle pursuits tonight because I knew that before I went to bed I had to make a hundred
copies of the Cockburn poster. I was about to ink up again when Cramplock came over.

“Before you do that, Mog, how about fetching us something to eat from the Doll’s Head?”

I nodded, relieved, because my stomach was beginning to rumble like an old cart. It was nearly six o’clock
and the shop was closed to customers, but he’d wanted to keep going until we’d finished these posters and something else
he was preparing for a man in the theatre.

The theatre bills were his favorite job: he used to lavish hours of painstaking attention on their different-shaped letters
and colored inks, making them seem as cramped and exciting as the theatre itself. “From Brighton, the Celebrated Mr. Symington!
Flying Through the Air, Without Visible Means of Support, the Sunderclouds! And Presenting for the First Time in London, the
Remarkable Mrs. Victor Reed (who Executes a Genuine Faint in the Role of Lady MacBeth!)”

I left him working the noisy press and darted towards the door before he had time to change his mind. The thought of meat
and ale was making my mouth water already. I seemed to be hungry absolutely all the time at the moment. It might have been
because I used to share whatever I had to eat with my dog, Lash, and most days he used to get the better of the meal. Lash
was the most adorable living creature I ever met, even counting human beings. He was all sorts of dog and no sort of dog,
probably five or six breeds rolled into one, with quite a lot of spaniel in him and a bit of lurcher. He was called Lash because
he had great big eyelashes — and when he looked at me from underneath them, I could willingly give him every last
morsel of food I possessed, however hungry I was.

As I was about to leave the shop I gave a short whistle; footsteps clattered down the wooden stairs, and there was Lash by
my side, licking my inky fingers and tickling my wrists with his whiskers, and wagging his tail so hard against the panels
of the wall when I said the word “Dinner” that it sounded like someone beating out a rhythm on a barrel. Lash and I went everywhere
together. We were well known in Clerkenwell and, I suppose, pretty well known everywhere else. So we emerged into the evening
air together, in such a hurry that I forgot my cap.

The empty windows of the house next door stared down at me as we went by. It had once been a grand town house, but it had
been deserted now for many years, after being burnt out in a terrible fire. Inside, the fire damage was still there to be
seen: blackened walls, the floor covered in ash and chunks of charred wood, the window-frames burnt to a crisp, the glass
in the windows opaque with smuts. The humble, grey little building which was now Cramplock’s shop, built right up against
it, must once have seemed like an insulting excrescence bubbling out of its towering northern wall; but the printing shop
had remained in use all this time, while its haughty neighbor had been left to rot. With some other children, I’d broken in
once: but we hadn’t stayed for long: there were too many rats, and every step caused a
creak or a groan which made it seem as though the whole house was about to collapse on top of us. No one could explain why
it hadn’t been knocked down years ago; and its charred black facade, like a sightless face, often made me shudder as I stepped
over the garbage in the lane.

The King's Daughter by Christie Dickason
Mending Fences by Francis, Lucy
Secrecy by Rupert Thomson
Arsenic for the Soul by Nathan Wilson
The Outrage - Edge Series 3 by Gilman, George G.
Iron Eyes, no. 1 by Rory Black
Melted By The Bear: A Paranormal Shifter Romance by Amira Rain
The Wright Brother by Marie Hall
Gracious Living by Andrea Goldsmith
Strange as This Weather Has Been by Ann Pancake
Our partner