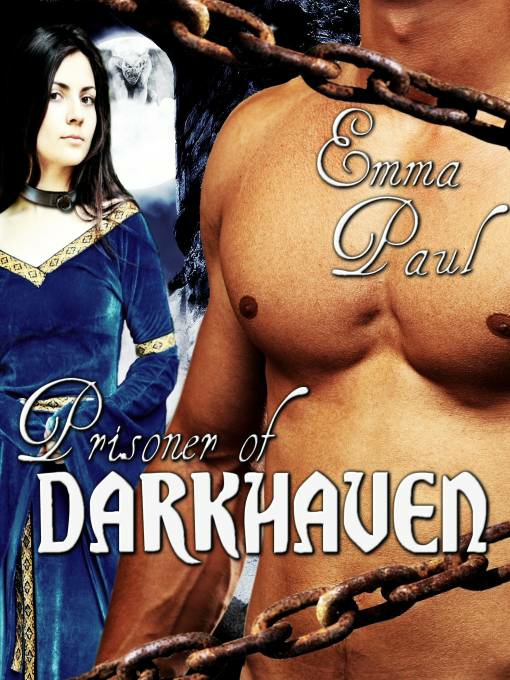 This book may not be reproduced in whole or in part without written permission.

Castle Darkhaven stood out against the darkening mid-evening sky.

Its highest steeple pointed defiantly towards heaven, as if daring God

to send his angels and tear it down. Franz Müller spent half his day

climbing the treacherous path up Mount Damon to the dark castle.

The cliff narrowed the higher he climbed towards the legendary

home of the dark Lord Damien Dontaleone.
They say he is a demon.

Franz pushed the disturbing thought aside.

Stones tumbled down the face of the mountain as his fingers

support. Taking a shaky breath, he pressed his back firmly against the

rocky surface and continued inching his way up the path.

Icy wind whipped through his hair. Thunder boomed and

lightening streaked across the sky, as he got closer to the castle. Night

approached fast. His chest tightened with anxiety and his heart

Franz lifted a trembling hand to his eyes, wiped the sweat from his

brow, and smoothed his hair away from his face, to get a better look at

the black stone structure looming high above him. He was so close.

Castle Darkhaven could be described as black as night, unlike any

he had ever seen and hopefully would never see again.
This is my

only hope
. His precious Elise waited for news of his meeting with

Lord Dontaleone and he wouldn't let her down.

the stone postern leading to the main entrance. Night had finally

descended and the full moon shone brightly against the black starless

Peculiar shadows danced in the glow of moonlight. They twisted

into odd shapes, intertwining into each other.

Franz walked cautiously to the gate.

Swallowing nervously, he slowly averted his eyes from the eerie

shadows and forced his trembling legs to keep moving forward

towards the castle's main entrance.

A tiny dark blur darted past him. He stopped, clutched his cloak

tighter around himself, and turned sharply to his left with eyes wide,

He could have sworn he heard something. Pulling his hood away

from his ear, Franz strained to listen. Eerie silence surrounded him.

Gathering what was left of his courage, he continued down the dirt

pathway and up the enormous stone steps leading to the front door.

A sudden shiver raced down his spine, feeling like the cold breath

of someone or something trickling down his back. He whirled around

to see who might be standing behind him, trying to focus into the

pitch darkness, but saw no one.

Taking another deep breath, he grabbed the gargoyle shaped iron

doorknocker and banged it three times against the wooden panel. A

cold wind blew over him, but the icy temperature had nothing to do

with his chattering teeth.

Peering in, Franz stepped inside, adjusting his eyes to the sudden

Several torches lined down the entire length of wall.

His heart thumped. A long foyer led to what he assumed must be

The wall reflected shadows that seemed to move with him.
It's only

my imagination.
Something watched him.

Up ahead he saw the arched entrance leading into the dining hall.

much too heavy. He loosened the top allowing it to part open in front.

Eyes darting left to right and fear tightening in his chest, he

hesitantly stepped into the hall.

Someone stood with their back to him, facing the fireplace.

The man stood at least a foot and a half taller than him. His broad

shoulders stiffened and his head turned slightly towards Franz.

"What do you want Miller?”

He sighed deeply and turned around. Dark unemotional eyes

Dontaleone. The man's expression turned to disgust as he regarded

him. Suddenly feeling pathetic and small, Franz lowered his head to

stare at his booted feet.

Lord Dontaleone stepped a bit closer. "You want to beg me to save

your daughter. And what will you give me in return, hm?"

Franz snapped his head up and blanched. It wasn't his intention to

meet Lord Damien Dontaleone this quickly. He tilted his head back

to see the face of the man before him. The Dark Lord stood tall and

confident. His frame towered over Franz. Unholy power poured from

him, causing Franz to cower back.

with high cheekbones. Firm lips were drawn into a tight line hinting

he was well beyond irritated by this little intrusion. Lord

Dontaleone’s mere presence gave validity to countless tales that he

was a creature capable of immeasurable cruelty.

Franz shrank back further from the dark lord, "I've little to offer,

my Lord, but I will gladly give it all if you help my precious Elise".

He sneered at Franz, "You have nothing I want."

The old Miller whimpered and took a few more steps back. "My

Something ran past Franz, brushing his leg. He shrieked and

stepped awkwardly out of the way.

curled upwards from its temples, scampered across the stone floor

straight to Lord Dontaleone and climbed up his back.

fangs. It perched on the Lord's shoulder.

The creature licked its lips, eyeing the plump, stout Franz, with

dubious intent. It wrung its skinny long hands together.

Perturbed by the small beast, The Lord grabbed it by its neck,

bringing it eye level, which made the tiny thing cringe with fear from

its master's condemning glare. He tossed it to the floor.

It was a single word, but the meaning was clear and lethal. Both

men watched it scurry off into the shadows. The Dark Lord then

"You beg me! Fool! What makes you think I would help a pathetic

excuse for a man like you, hmm? Be gone! Go back to your hovel,

you have made your bed and sealed your daughter's fate! Out of my

The Miller's hands trembled as he pulled his cloak tighter around

himself. He cowered away from Lord Dontaleone. Fire seemed to

erupt around the Dark Lord. His voice echoed demonically and the

room seemed to get colder, darker despite the brilliant glow from the

open fireplace. Defeated, the Miller turned quickly and hurried to the

Elise jerked her head up from the book in her lap, the moment she

heard the front door open. Her father entered, a look of despair

Their last hope had been Lord Dontaleone. If that wasn't bad

enough, she was to report in three days' time to the Grand Duke's

castle in order to begin the task. Two days had already passed. She

sensed by her father’s demeanor that things did not go so well.

However, she still held onto a tiny sliver of hope that the Lord of

Darkhaven, would take pity on her.

She took her father's cloak and hung it up on a hook near the door.

"Papa? Did you speak with Lord Dontaleone?"

He turned to face her. His eyes glistened with his unshed tears.

of the hearth. Elise brought him the woolen blanket; her mother had

knitted the last year of her life. She draped it over his legs, and knelt

He paused and took another deep breath. "I did speak with him."

our plea. He will not help us." He bowed his head and released his

hopelessness in a torrent of silent sobs.

Elise froze when she realized the implication of her father's

statement. If Lord Dontaleone would not help her then she was

doomed. After tomorrow, she needed to begin her impossible task of

spinning straw into gold, just to prove her worth as the King's chosen

bride. How she wished her father had never presented her to the King

in the first place.

However, he insisted she could win over the King's fancy from all

the other maidens in the Kingdom. Their lives of poverty would

finally be over.
At least to her father's way of thinking.

Although he meant well, Elise truly had no desire to wed the king.

She was content in her small cottage, helping her father run the mill.

Unfortunately, her father was right, she did win the King's favor,

but with a price. Since she was a peasant's daughter, the King's

advisor Grand Duke DeMumart felt she needed to prove her

worthiness. When he then asked, what her special talents were, her

best-stuffed goose in the kingdom.

None of which impressed the King or the Duke. Out of

desperation, he implied that she had a secret talent. When prodded by

the King he told them that she was so proficient at the spinning wheel,

she could spin straw into gold.

Duke to take the boast literally, but that is exactly what happened.

Ever since that day, they pleaded with all the magical creatures of the

However, none had the magic powerful enough to conjure up a

spell that would give her the ability to spin straw into gold. Well, so

Lord Dontaleone was their only hope and although he had the

power, he refused to use it. She turned her attention once more to her

father who still wept uncontrollably by the fire. Her heart sank with

bitter helplessness. She laid her head on his lap.

"Don't worry father. All will be well."

Stroking her head, he sighed, "How Daughter? If you do not

him." He shook his head, "It is hopeless. After tomorrow the Duke's

men will come for you and ... and..." placing his hands over his face

Elise wanted desperately to console her father. She would figure a

way out of this. There had to be a way, but what? A sudden gust of

against the wall. Elise quickly got up and closed them. Another gust,

much more subtle, breezed over her.

Darkhaven, go to him.

The whisper traveled in the wind. Surely, she must be imagining

things. The wind didn't talk. Scolding herself for her own

foolishness, Elise closed the shutters and started to walk back towards

the hearth. Another strong blast of wind shot through the window

That time she was sure she heard it, but what did it mean. Go to

Darkhaven. Why? The Dark Lord had already rejected her father's