Read Prisoner of the Queen (Tales From the Tudor Court) Online

Prisoner of the Queen (Tales From the Tudor Court) 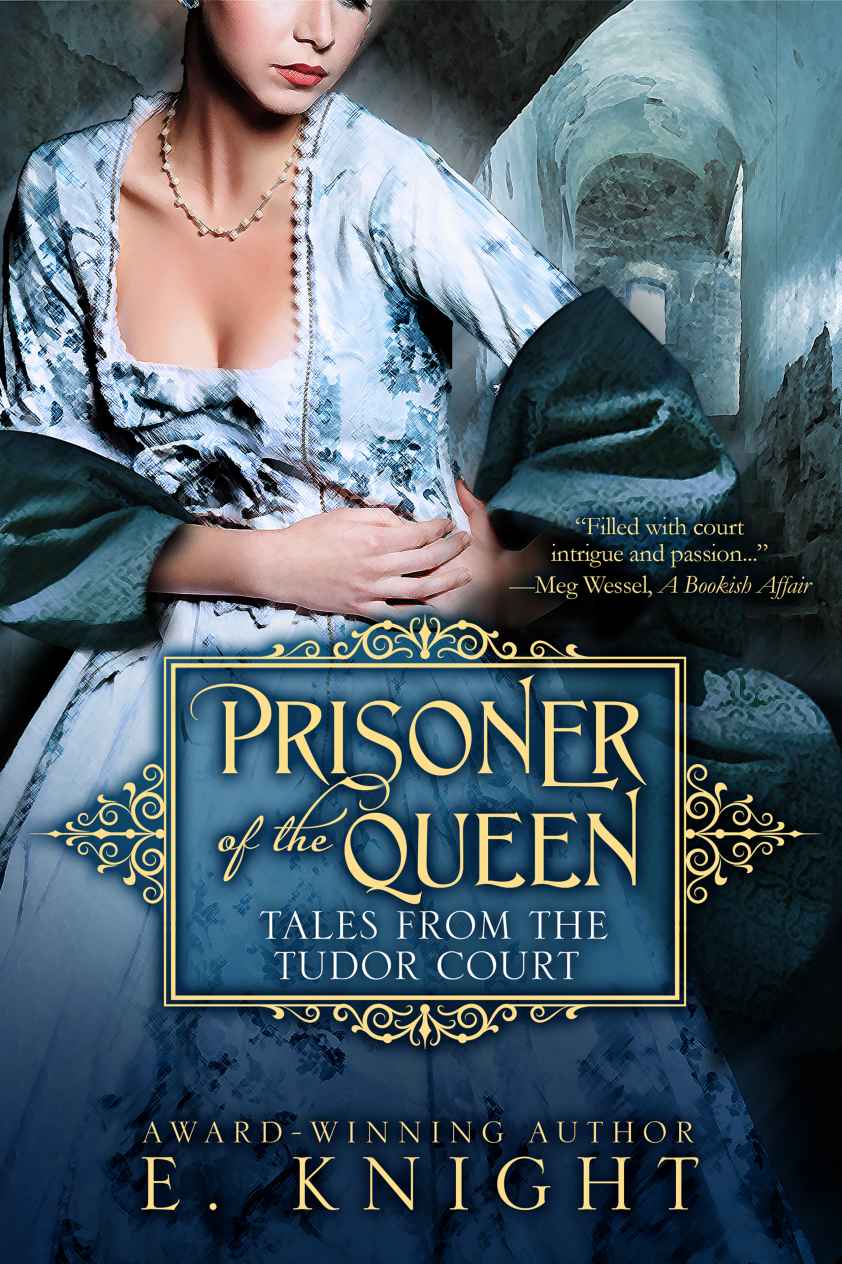 I have served three queens in my life.

One was my sister. O
ne was my savior. And one my bitterest enemy.

Knowing she was seen as a threat to the Queen she served, Lady Katherine Grey, legitimate heir to the throne, longs only for the comfort of a loving marriage and a quiet life far from the intrigue of the Tudor court. After seeing her sister become the pawn of their parents and others seeking royal power and then lose their lives for it, she is determined to avoid the vicious struggles over power and religion that dominate Queen Elizabeth’s court. Until she finds love—then Kat is willing to risk it all, even life in prison.

Praise for
PRISONER OF THE QUEEN

"
E. Knight is back with another tale from the Tudor Court. Think you've read everything about the Tudors? Ms. Knight shows that there is much more to love. Filled with court intrigue and passion, this book will have you wanting to read more about her heroine, Katherine Grey, sister of Queen Jane Grey
!" ~ Meg Wessel, A Bookish Affair

"
Eliza Knight has written a captivating story that brings to life a stormy period in history. Lady Katherine Grey, not just sister to the nine day queen but also an heir to the throne of England. The author was able to capture the feel of Tudor England, she portrayed this young woman with her hopes and dreams of a future, of love, marriage and motherhood, all things denied her sister. Though Katherine finds love she is at the mercy of both Queen Mary and Queen Elizabeth (who also views her as a threat to her crown). An emotional story, full of jealous rivalry, scandal and heartache.  These are women with the blood of Henry VIII running through their veins, how could it be anything but.
"
~
Margaret Cook at Just One More Chapter

“
E. Knight’s writing transports me to another time and place—I can picture everything and I become completely lost within the pages of this novel. The author has a great gift for storytelling that makes it hard to put any of her books down. This novel is another hit in a long list of great novels by E. Knight. She definitely has a way of pulling the reader into a novel, and letting them get lost in the smooth writing and great research
.” ~Historical Fiction Obsession

“
Eliza Knight once again tells the story of the little known royal relation with a personal panache and flair for the dramatic that serves to elevate one given a mediocre place in the annals of history, to astronomical heights in the fictional arena. Vibrant characters, mind-bending plot twists, and a fluid yet breakneck pace, are all trademarks of authoress Knight, that fans of her books have come to know as her signature hallmarks of excellence
.” ~ Frishawn, WTF Are You Reading

"
Prisoner of the Queen had me gripped from the prologue. Eliza Knight has artfully told the story of ill-fated Katherine Grey, sister to the Nine-Days Queen, Jane Grey. As a lover of all things Tudor, I thoroughly enjoyed this book. There is a fresh perspective on court life and several Queens through the eyes of Katherine Grey. Katherine, who had been inundated with Court Life since she was a child, is cousin to Queen Mary and Elizabeth. Katherine Grey is seen as a threat to the Crown, but all she wants in her life is to carry on a humble existence with the man she loves, Edward Seymour. The star-crossed lover's story is presented with historical accuracy, including some of the actual letters written by Jane and Katherine Grey as well as heartbreaking emotions. For any Tudor lovers, this is a new and exciting story from the Tudor court complete with intrigue, plotting and executions.”
~Stephanie Hildreth, 100 Pages A Day....Stephanie's Book Reviews

“
The circumstance of Katherine Grey’s existence is portrayed with passion and the intrigues of the Tudor court are skillfully depicted. Witnessing her sister’s demise and unable to marry her true love, Katherine is a tragic figure at the mercy of a vengeful monarch. Knight deftly conveys the joy and anguish of a doomed love story resulting from the misfortune of being born with royal blood
. “ ~Julie Merilatt, JulzReads

"
The story is so effectively saturated with period details and descriptions that I felt I could almost hear the wind rustling the elaborately embroidered dresses and feel the abject fear flowing through Katherine’s royal blood. I was completely transported into her world and wanted her to find the peace and happiness she so longed for – even as I knew her story couldn’t possibly end in that way – as if she was a friend of mine." ~
Colleen Turner, Historical Tapestry

“
Prisoner of the Queen is a refreshing look at the life of Katherine Grey. For the first time, she is portrayed as a strong, intelligent woman instead of as a foolish and naive girl. I thoroughly enjoyed Ms. Knight's unique portrayal of this fascinating historical figure
.” ~Denise Farmer, So Many Books, So Little Time

Prisoner of the Queen

Tales from the Tudor Court

PRISONER OF THE QUEEN © 2014 Eliza Knight. ALL RIGHTS RESERVED. No part or the whole of this book may be reproduced, distributed, transmitted or utilized (other than for reading by the intended reader) in ANY form (now known or hereafter invented) without prior written permission by the author. The unauthorized reproduction or distribution of this copyrighted work is illegal, and punishable by law. The characters and events portrayed in this book are fictional and or are used fictitiously and solely the product of the author’s imagination. Any similarity to real persons, living or dead, places, businesses, events or locales is purely coincidental.

To Michelle... For believing.

Some people say an author’s career is a lonely job, but it is anything but. I’m surrounded by people who’ve helped me along the way and offered support in so many ways. I could not do it without them
.

There are many people I wish to thank for helping in bringing this creation to life. First, and foremost, and always, is my husband and daughters who have been such a huge support to me over the years, and endured the hours I spend researching, writing and talking endlessly about my characters. You all are my mountains!

Prisoner of the Queen
was a true labor of love—of which I considered making an alternate history because the ending was so difficult to write. My critique partners talked me off of that ledge! As this is the second book in the series, the same people who assisted me in writing the first were instrumental in this work as well. I could not have written and published this book without the help of the following people: Stephanie Dray—a huge supporter and friend! She read endless chapters and helped me to revise, listened to me vent and once again talked me down off of ladders. Kate Quinn for taking the time to read my book and pointing out places for improvement—you’re a gem! My copy editor, Joyce Lamb, who bled with me over tense issues (again)! Amy Bruno for helping me to find advance readers, setting up my blog tour and the release party. No one can market like you can! My critique partners, Kathleen Bittner-Roth and Tara Kingston, who read the chapters of this book in its beginning stages years ago. Without your encouragement, I’m not sure I would have kept on going!

And last but never least, my wonderful readers. Without your dedication to my books, your support and pure awesomeness, I would not be able to do what I do. Endless gratitude!

The court of Henry VIII is vast in occupancy, and for this story, while I’ve used a number of its inhabitants and key players, I have also for the sake of the reader’s sanity and confusion, taken liberty to neglect a few. Even still, the number of characters within this book is staggering, and as such, necessitated an introduction of sorts in case you get confused. Additionally, many people in history had the same names, and so while reading, it can become confusing who is wh
o
.

Henry Grey—Duke of Suffolk, married to Frances Brandon and father of Jane, Katherine and Mary Grey.

No Eye Can See by Jane Kirkpatrick
Avalanche (A Stone Mountain Mystery Book 3) by Kristina Stanley
Sweet Like Sugar by Wayne Hoffman
Ten Days by Gillian Slovo
The House of Seven Mabels by Jill Churchill
Pear Shaped by Stella Newman
Sophomoric by Rebecca Paine Lucas
Fearless by Brigid Kemmerer
Unplugged by Donna Freitas
Tiffany Tumbles: Book One of the Interim Fates by Grayson, Kristine
Our partner