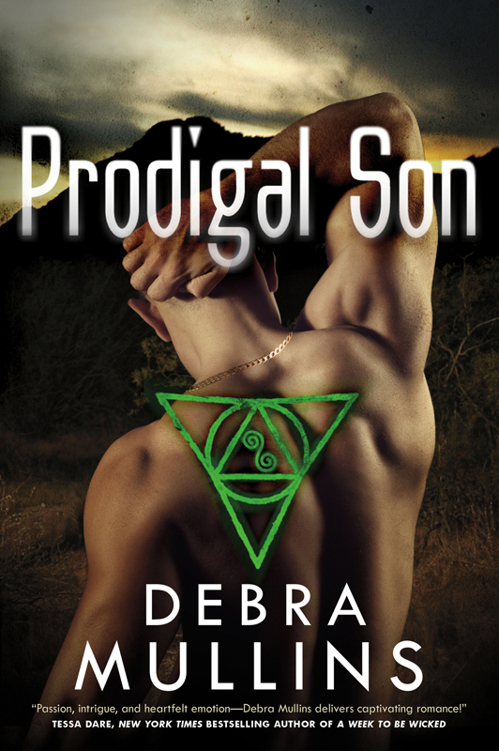 This book and my vision of Atlantis lived in my imagination for years, and it would never have come into being if not for the constant support of a few important people. From my husband, who always respected my writing, to my agent, Lucienne Diver, who believed in the story from conception, to Heather Osborn, who bought the series for Tor, and to Melissa Frain, who edited it.

No writer truly writes alone. Thanks to the other writers who were there for me: The Alphabet Gang: Alison Diem, Beth Yarnall and Charity Hammond; The Hotcakes: Jenna Kernan and Susan Meier; and Shannon Donnelly, wonderful friend and fantastic writer/brainstormer/editor.

But the most important dedication goes to Ryan Manning, the inspiration for Rafe Montana and his Hunter counterpart, with much love. Always use your powers for good.

The diner had seen better days.

The smells encompassed Rafe Montana as he walked in: fresh coffee and the lingering aroma of bacon, burgers, and fries served twenty-four hours a day. At this hour of the night, fluorescent lighting glared off the red vinyl of the empty booths, emphasizing without pity every rip and patch. A Formica counter stretched the length of the far wall, and a waitress nursed both a steaming cup and a magazine near the coffee machine at the end. She looked up at the sound of his booted feet on the worn tile, her heavy mascara failing to disguise the fatigue in her eyes.

“Sure.” She waved a hand in the direction of the empty dining room, then dropped her eyes back to her magazine. “Menu’s on the table. Let me know when you’re ready.”

“Thanks.” He slid into the booth facing the restrooms, on the side where the door would swing toward him. He took a menu from the holder and opened it to block his face. And to give his damn hands something to do so they wouldn’t shake like some rookie’s.

He had to do this. He was the only one who could.

His gut clenched. He kept thinking about the job, tied himself in knots over it. He gritted his teeth, his fingers tightening on the menu before he blew out a deep, slow breath and forced himself to relax. If he wasn’t the one to do this, it would be someone else. And he had to look Jack Needham in the eye to find out the truth.

Seeing the truth was just the smallest part of what he could do, along with the way he sometimes knew things, like nuggets of information dropped into his mind by the universe. And he could focus on a person and immediately see that person’s location. If the image was in color, the person was alive. Black and white, dead. All gifts, the family stories said, from some ancient ancestor in Atlantis. He could find anyone, anywhere.

He was a Hunter.

He’d used his power earlier to Hunt Jack. The vision he’d gotten had exploded with color and put his quarry right here in this run-down diner near the Nevada-Arizona border. When Jack came out of the men’s room, he would find Rafe waiting.

And Rafe would know for certain if Jack really was dirty.

When Rafe had first come to Vegas a few years ago, he’d had big dreams about using his truth-seeing gift to play professional poker. But nowadays the players usually wore sunglasses to hide their eyes, and the mojo wouldn’t work if he couldn’t see the eyes. So he went to plan B and became a bounty hunter. After a couple of years as a PI, he’d aced the training, gotten his license, and jumped right in. That’s how he’d met Jack.

His friend. His mentor. Now his prey.

None of these fellas would have any trouble with me if they hadn’t broken the law. They made the choice.
Jack’s voice, about mellow as a rusty hinge, echoed in Rafe’s memories even now. How many times had he echoed Jack’s motto? Considered it gospel?

Rafe shook his head. He should have known better than to get caught up in the whole team thing. He was better off alone.

“You made the choice this time, Jack,” he murmured, his throat tight. “You broke the law.”

The restroom door swung open with a creak, momentarily blocking Rafe from Jack’s view. He had five, maybe ten seconds before Jack’s training would have him looking this way.

The door started to swing closed, and Rafe used the resulting squeak to cover the sound of his movements as he slid from the booth. He rose to his feet just as Jack turned his head. Their eyes met.

“Damn, kid.” The older man swept a quick, assessing gaze over him, his dark eyes sharp. A half smile quirked his mouth. “Long time, no see.”

Yeah, Rafe hadn’t seen Jack in a while and was shocked by the tiny differences in his appearance. Deeper lines around his mouth and eyes in a face tanned by Nevada sun. More gray in his black hair than there used to be. A leaner, hungrier look that made his wiry body appear even thinner and, for some reason, made him look older than his fifty-nine years.

Jack jerked his gaze up, challenged him with his rigid posture. “Hell, no.”

Disappointment unraveled through him, merging with his churning misgivings and promising misery later. “You’ve been taking bribes to let skips go. Willie the Fish. John Allen. Martino Sanchez. And now you blew off your court date to make a run for Mexico.”

Surprise flickered across Jack’s face for just a second, before he squared his jaw and narrowed his eyes. “Where do you get your info, kid? I haven’t even left the state, much less thought about Mexico. And I thought the court date was tomorrow.”

Rafe wouldn’t allow himself to be fooled by the cajoling tone. His powers had never failed him, and he could see the cunning, the calculation, lurking in Jack’s gaze. He’d never thought Jack would lie, not to him. Betrayal sliced deep, shredding any lingering hope with cruel finality. In his book, there was never any excuse for screwing the people you cared about.

In a way, it made the situation easier. With friendship and trust destroyed, now there was only the job.

“The
coyote
is supposed to meet you here at two
A.M.
,” he said, responding to the inner prompt that suddenly fed him the information. “You were going to ditch your truck and ride with him to Naco, where he would hand you off to another
coyote
who would get you across the border.” He shook his head. “Bad plan. I don’t think a guy your height would fit behind the dashboard.”

Jack had stiffened more and more as Rafe laid out the scenario in a calm, sure tone. “You don’t know shit.”

“Like hell.” All pretense melted away. Jack leaned toward him, pointed a finger. “You don’t know, Montana. You don’t know what it’s like to work for years perfecting skills to get to the top, only to have some punk like you roll in and take it all away without breaking a sweat.”

Rafe flinched at the vicious attack. “What the hell are you talking about?”

“What’s the matter, rich boy? You get bored with corporate America? Needed to slum?” Jack took a step toward him, his familiar face a rictus of rage. “I worked my butt off making a name for myself, and then you show up. I decide to be a nice guy, show you the ropes. Then what happens? You start snagging all the good cases out from under me like some goddamn Vegas Mountie who always gets his man. Zero percent failure rate. What the hell? Your rich family got a bunch of PIs on the payroll or something?”

Truth and lies, tumbling over each other like dirty laundry, but Jack believed every word. Of course he’d checked out Rafe’s background, found out about his family. Rafe would have done the same thing. He didn’t discuss his family; he hadn’t seen or talked to any of them in years. That was safer for everybody. As for his success rate, what could he say?
Hey, Jack, I have this psychic thing that tells me where all the skips are.
Cold crept through him. He’d relaxed too much, used his powers too freely. Just like before. But at least no one had gotten hurt this time.

Guilt pinched. But then again, Jack had made the choice to go bad. He could have found another way. That was on him, not Rafe.

“Say something.” Jack opened and closed his fists at his sides. “You ruined me. The money dried up. My girlfriend left me and took my bank account with her. No one wanted to hire me anymore, not for the good stuff. They had me chasing DUIs and deadbeat dads. That’s not me. I’m better than that.” He sucked in a shaky breath. “I had to find some way to survive.”

“You’ll see what I mean.” Jack lifted his chin, glared. “This job burns the hell out of guys like us. A pace like you’ve been keeping? A couple of years from now, when you’re sitting alone in an empty house with your bones aching and all the innocence beaten out of your soul, easy money for looking the other way will seem like salvation.”

“That’s what I said, too, kid.” Jack gave a hard laugh. “Just wait until some young hotshot shows up and muscles you out of the top spot.” He paused, his lips curving ever so slightly. “Unless you screw up before then. Like you did back in Arizona.”

The verbal sucker punch stole the breath from his lungs. He fought to keep steady. How the hell did Jack know about
that
? It wasn’t in any public record anywhere.

“Told you I’m good.” Jack narrowed his gaze, studying Rafe’s reaction with apparent satisfaction. “You got no woman, no friends, and a family you turned your back on. All you’ve got is the job, Montana, and when it’s gone, what are you gonna do? What will you have left?”

Nothing
. Harsh truth, echoing down to his bones. Looking at Jack, Rafe realized he could be gazing at the reflection of his future self: lonely, bitter, fading into the shadows like some dusty legend.

Hell, no. But he had no choice. He couldn’t take the chance of risking any more lives.

Jack had a choice.

“You’re gonna dry up and blow away, just like the rest of us,” Jack sneered. “Better get used to it.” His gaze flitted to the windows, then back to Rafe.

The small movement triggered alarm bells. All it took was a thought, and the Hunter kicked in, showing Rafe a vision of a Latino guy in jeans, blue shirt, and a hat parking his ancient pickup at the far end of the parking lot outside. The
coyote
sat in the truck, engine running, and lit a cigarette before glancing at his watch. Rafe pushed the image away, focused on Jack.