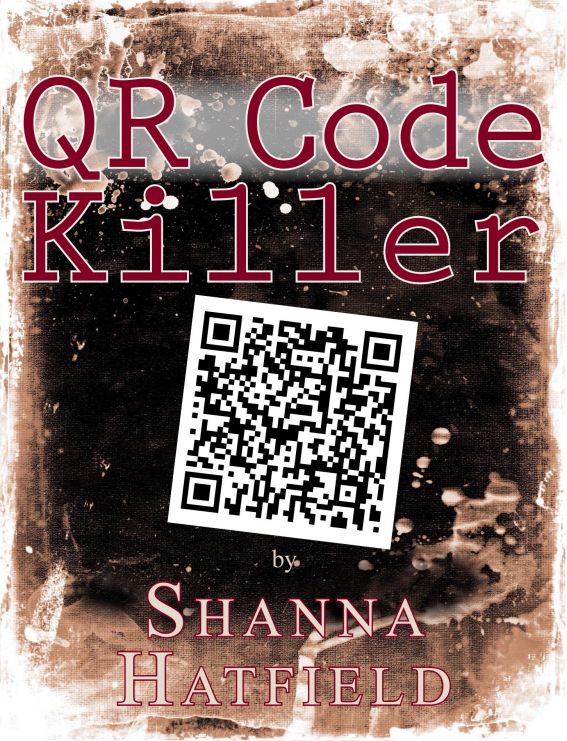 Zeus is a crazed killer who uses QR Codes to taunt the cop hot on his trail.Mad Dog Weber, a tough-as-nails member of the Seattle police force, is willing to do whatever it takes to bring Zeus down.

Despite her best intentions, Maddie (Mad Dog) falls in love with her dad's hired hand, putting them both in danger.Erik Moore is running from his past and trying to avoid the future when he finds himself falling in love with his boss' daughter. Unknowingly, he puts himself right in the path of the QR Code Killer as he struggles to keep Maddie safe.From the waterfront of Seattle to the rolling hills of wheat and vineyards of the Walla Walla Valley, suspense and romance fly around every twist and turn.

Erik Moore struggles to overcome his grief and make it through one day, then another. Running from his past and the pain of losing his wife and unborn baby, Erik finds himself in Walla Walla, WA, installing wind turbines on a century farm for the summer. Little did he know that choice would lead him directly into the path of a madman and down a road filled with many unexpected turns.

From the water front of Seattle to the rolling hills of wheat and beautiful vineyards of the Walla Walla Valley, Mad Dog and Erik race to stop Zeus before he makes things really personal. 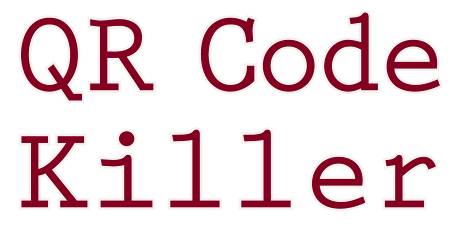 All rights reserved. No part of this
publication may be reproduced, distributed, or transmitted in any
form or by any means, including photocopying, recording, or other
electronic or mechanical methods, without the prior written
permission of the author, except in the case of brief quotations
embodied in critical reviews and certain other noncommercial uses
permitted by copyright law.

This is a work of fiction. Names, characters,
businesses, places, events and incidents are either the products of
the author’s imagination or used in a fictitious manner. Any
resemblance to actual persons, living or dead, or actual events is
purely coincidental.

Thank you for downloading this ebook.
Although this is an ebook, it remains the copyrighted property of
the author, and may not be reproduced, copied and distributed for
commercial or non-commercial purposes. If you enjoyed this book,
please encourage your friends to download their own copy at
Smashwords.com, where they can also discover other works by this
author. Thank you for your support.

The Women of Tenacity Series

The Women of Tenacity - A Prelude

To the wonderful women who proofread by
ramblings.

You can’t begin to know how much I
appreciate your help, encouragement and support!

You are the best!

"You in position, Mad Dog?"

Mad Dog Weber was one of Seattle's finest
detectives in the narcotics division. A cop for ten years, Mad Dog
was well respected, on top of the game, and seemingly fearless.

Now, sitting on the curb outside a seedy
dive near the waterfront, watching the back door and waiting for
the signal to move, no one would know they were looking at someone
who offered firearm training to many of Seattle's newest police
force members. Face smeared with dirt and clothes covered in filth,
Mad Dog reeked with the stench of sweat and booze. A grimy hand
held the 9mm Glock handgun under a rumpled newspaper while an ear
piece remained hidden beneath stringy hair and a moth-eaten
stocking cap.

"You can still back out," a deep voice
badgered over the connection.

Mad Dog muffled a snort. "Right. Cause
that's how things roll with me."

"Just shut up and get ready," Mad Dog
whispered, keeping both eyes hooded but alert as a drunk wandered
by.

Once the drunk staggered around the corner,
Mad Dog got up and pushed the rickety shopping cart filled with a
homeless man's treasures closer toward the back entrance, keeping
the newspaper covered hand on top of the cart.

This stake out was more than just an
opportunity to nab another bad guy. Zeus was a thief, drug lord and
murderer. Mad Dog wanted nothing more than to see him brought to
his knees begging for mercy. Dreams of pulling the trigger and
driving home the bullet that would end his miserable life had been
a constant, haunting companion since Zeus had made things personal.
Six months ago, he shot down Mad Dog's own mother in cold
blood.

Mad Dog was ready to return the favor.

Zeus had been on their radar for almost a
year, but no one seemed to be able to identify him, let alone catch
him. His name traveled in the circles of drug runners, crack
houses, meth labs and hit men. If it was dirty and illegal, Zeus
was probably involved in it. Mad Dog nearly caught him eight months
ago. Tipped off by a dealer who wanted to barter a shorter
sentence, Mad Dog discovered Zeus set up an appointment to talk
about a large shipment of drugs out of Seattle. The stake-out
collapsed when one of Zeus’ bodyguards caught on to the scheme and
Mad Dog went running after the elusive figure known as Zeus,
getting close enough to smell the fear surrounding him as he
fled.

With no idea what his face looked like, Mad
Dog had the department's artist create a sketch featuring a tall,
fit man with dark hair and skin.

Shortly after the encounter, Mad Dog
received a QR Code in the mail. Arriving in a plain brown envelope,
the code was printed on a piece of white cardstock. Scanning it,
the code landed on a page that simply said "Back off!"

Mad Dog had all their techie experts try to
find where and how the website was built, to pull an IP address,
but the page was impenetrable.

Furious beyond belief, Mad Dog doubled the
efforts being put into hunting down Zeus. Three weeks later, Zeus
shot Elaine Weber in her car on her way home from the grocery
store. Shortly after the killing, Mad Dog received another QR code
that scanned into a video showing Elaine being shot along with the
words, "I told you to back off. Now maybe you'll listen."

Rousing from the vicious memories, Mad Dog
listened to the conversation going on between their undercover cop
and one of the men who worked for Zeus.

Hearing the phrase, "right on time," Mad Dog
recognized the signal to get into position.

With a tightened grip on the Glock, Mad Dog
took a careful look around. Something didn't feel right. Something
was off. Muscles tense, Mad Dog waited.

"You're a cop! You're wearing a wire!"
buzzed through the earpiece.

Knowing there was another cop in the shadows
of the alley who would watch the back door, Mad Dog took off at a
dead run. Clearing the corner of the building, Devin and two other
officers, Glen and Danny, were already chasing down Zeus' man.
Heading toward the pier, he kept right on running. Devin was
gaining on him and Mad Dog wasn’t far behind.

Devin took a shot and missed, but the runner
stopped and drew a gun.

"Unless you want your pretty boy face blown
to oblivion, turn around and leave."

"I don't think so," Devin said, standing a
few feet away. "Drop your weapon or I'll shoot you."

"I said, drop your weapon." Devin's voice
sounded rough and harsh, a sharp contrast to his blue eyes, blond
hair and guy-next-door looks.

Mad Dog stood with the other two officers,
guns drawn, hoping they wouldn't have to shoot. They needed this
guy alive so they could pump him for information about Zeus.

"No can do," the man said and fired. Devin
took the bullet as he propelled himself into the gunman, carrying
them both off the pier. Two more gun shots rang out as Mad Dog and
the officers ran to the edge.

"No, Devin. No!" Mad Dog frantically tugged
off the stained coat, the moth-eaten hat and ripped at the bullet
proof vest covering her chest. She could hear Danny and Glen both
yelling into their mics requesting back up and equipment.

This would happen on a night as dark as the
soul of the man they hunted. The lights on the pier did nothing to
penetrate the blackness of the lapping water below.

Knowing what she was planning to do, Danny
held her back while his partner dove into the darkened waters.
Struggling to free herself from his grasp, she glared at Danny.
"He's my partner."

"I know he is, Maddie, but there is no way
you could haul him out of the water. Glen will find him."

The pounding of footsteps and the tell-tale
sound of sirens flooded around them as more of their team arrived
on the scene. Soon floodlights were searching the water for both
Devin and Glen. Divers in full scuba gear jumped off the pier in
hopes of recovering three bodies.

Mad Dog, known to her friends and family as
Maddie, stood and watched the water, willing Devin and Glen to
surface. If something happened to Devin, she didn't know how she
would live through it.

Although she knew better, knew it was
against policy, she had fallen in love with her partner. She
couldn’t even tell when the admiration and friendship she shared
with Devin turned into something more, but it had. Now, the thought
of never seeing him again was ripping apart what little was left of
her heart.

From all she had learned about Zeus, it fit
his profile to make his targets suffer. If she was on his list, he
was certainly doing a good job of plunging the knife deep and
twisting it.

An hour later, the scuba team dragged the
limp body of Glen to the edge of the pier, but nothing was found of
Zeus' man or Devin.

Putting a hand on Danny's arm, Maddie gave
it a squeeze. "I'm sorry, Danny. So sorry. You should have let me
go in."

"Maddie, don't. Please don't. Not now,"
Danny said, fighting to talk around the lump in his throat as he
watched the sheet-covered body of his own partner be wheeled away.
Before this awful night was through, he would drive to Glen's home
and break the news to his wife.

"Do you want me to come with you?" Maddie
asked, watching the divers pull in their gear.

"No. I need to do this alone," Danny said,
taking a deep breath and straightening his shoulders. Glen was a
good man, a good partner, a good friend. Now he was one more
casualty in the war to capture Zeus.

Giving Danny one last look filled with
sorrow and regret she watched him cross the street and get in a
car. Turning, she walked to the end of the pier to stand alone and
let her tears drop into the brackish water.