Read Quarter Past Two on a Wednesday Afternoon Online

Quarter Past Two on a Wednesday Afternoon 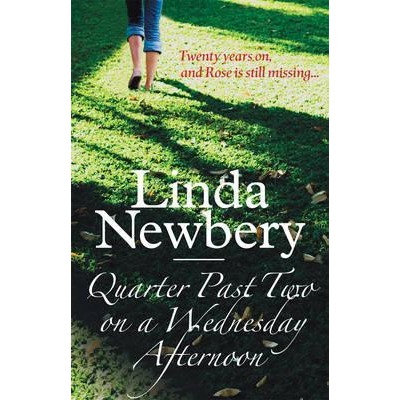 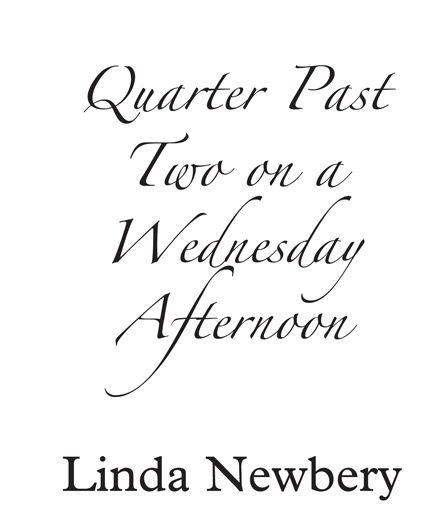 It was the day when everything stopped, and something started that was quite different, that couldn’t be controlled or shaped or ended. From then on, a ringing telephone could terrify; a knock on the front door could numb the house into petrification.

Prompted at first by her parents, then by the police, and ever after by her own search for overlooked significance, Anna went over and over the events of the morning, the lunch time, and her parting from Rose. She replayed and replayed until she couldn’t tell if she was really remembering what happened. Maybe she was only recalling memories.

For Anna it had started as an uneventful weekday in the summer holidays, a Wednesday. Mum and Dad were at work, and the girls spent most of the morning in Rose’s room, Rose sketching with the radio on, Anna sprawled on the bed, reading. Early haze cleared to unbroken sunshine; after a sandwich lunch, Rose fetched the garden lounger from the garage and put it under the pear tree, then sat sideways to paint her toenails before settling with a book. Bored with being at home, Anna decided to go the shops.

‘See you later,’ she called from the back door, and Rose, already engrossed, replied without looking up. What were her exact words? Anna couldn’t remember, though in the days to come she strained to hear, squeezing her eyes tight shut to open her ears to the echo of what she’d missed. Rose had said nothing, she was sure, about going out, or meeting anyone. She looked as if she intended to stay all afternoon in the quiet of the garden, reading and sleeping in the tree’s dappled shade.

Asked what time this was, Anna thought it must have been about a quarter past two, because the radio was still on in Rose’s bedroom and she’d heard the two-o’clock pips as she went upstairs. Some two hours later she returned, letting herself in with her own key. She had felt no more than mild surprise to find the house empty, the garden deserted. Sometimes, still, she dreamed of returning to that day and making it so ordinary that it would merge into dozens of similar featureless days. Rose would be in the garden, or if not she would soon come home, preoccupied, a little impatient at being questioned. But
there
.

No sign of a break-in; the police asked her closely about that. No sign of anyone having visited. Nothing any different from how it usually was. The blue garden lounger was there under the tree, with an empty glass tipped over on the grass. Anna poured a cold drink, took Rose’s purple varnish and painted her own toenails, although it was forbidden by Mum, who said that Anna was too young, so she’d have to keep her feet hidden in socks and shoes. Soon after five, Mum returned from work and asked where Rose was; six o’clock came, and seven, and now Dad was home as well. At eight-thirty, Mum phoned Rose’s friend Christina. No, Chrissie hadn’t seen Rose that day, and had no idea where she might have gone. They’d spoken on the phone last night, when Chrissie got home from her holiday, and were to meet tomorrow, A-Level results day. They planned to be at school to open their envelopes together, compare results and go into town to celebrate or commiserate.

Anna didn’t see why Mum was getting so worked up; it wasn’t particularly late. Dad reassured them both that everything was fine, that Rose would be back any moment now. She’d met someone she knew, or she and Jamie had got back together and were making up for lost time. Or, likeliest of all, Dad said, she was anxious about her A-Level results. ‘Remember the state she got into about her O-Levels?’

‘You know she’s set her heart on getting three As,’ said her father. ‘Let’s hope to God she gets them. It’s the waiting, it’s got to her. She’s met someone from school, gone home with them.’

‘She’d have phoned,’ Mum said flatly; it was her reply to all his suggestions. ‘She wouldn’t stay out without telling us.’

‘She’s eighteen now, love, old enough to take care of herself. We’re not going through this every time she goes out for the evening. She’ll turn up, right as rain.’ Dad kept saying that, as if saying it over and over could make it so.

Sent up to bed, Anna stood for a while with her elbows on the windowsill, looking out at the garden. Dusk was falling now; the shrubs were heavy with leaf, and it had begun to rain – light, refreshing rain that Anna could hear through the open window as a faint hissing, and smell as wetness on dry earth. It was almost the middle of the school holidays. At first, the six weeks had stretched out with no end in sight, but already the nights were creeping in earlier. It didn’t seem fair that midsummer, the longest day, was back in June, before the holidays had even started. After what Dad called ‘the year’s turning’, the days immediately began to shorten towards autumn and September, and the return to school.

In bed Anna propped herself up, reading
Forever
, her library book, anticipating drama, and the earful Rose would get when she turned up. Eventually she turned off her light. It was a way of hastening Rose’s return; when she woke up it would be morning, Rose would be asleep in her room, and no one would remember why they’d been so worried.

But she woke instead to Mum’s voice from the downstairs hall. ‘It’s Sandra Taverner, Rose’s mother. I’m sorry to bother you so late, but we’re a bit worried about where Rose is. She’s not with Jamie? No, no. Yes, I know, but I thought perhaps …’

And it was still dark; not morning, but a few minutes before midnight. Anna sidled to the top of the stairs. Her mother stood for a moment still holding the phone, then replaced it and went back into the sitting room. Surely Rose would come in at the stroke of midnight, or risk being turned into someone else or frozen into a statue. Anna waited, her eyes on the front door, confident. The hands of her watch aligned themselves at twelve, and the minute hand moved barely perceptibly into the frightening orbit of next day. It was tomorrow now, and Rose hadn’t been here since yesterday, and that made it immensely more serious.

She crept halfway down the stairs.

‘I’m going to phone the police,’ her mother was saying.

‘Don’t you think we should—’

‘No! No! I can’t wait any longer!’ And now Mum’s voice rose in a wail; she ran to the telephone table in the hall, both hands clamped to her mouth. Seeing Anna, she stopped dead. Dad followed, put an arm round her shoulders and led her back into the sitting room. He hadn’t seen Anna huddled on the stair, shivering in her pyjamas.

She heard him say soothing words, and Mum’s quiet sobs. When he came back to the phone there was a long moment of breathing as he reached for the receiver, hesitated, then picked it up. He was going to dial 999, Anna supposed, and although this was exciting she wanted to yell at him
No, don’t
, because to make that phone call was to stop pretending everything was normal, and to move into a new phase.

‘I want to report a missing teenager,’ Dad said. ‘Yes, yes. My daughter.’

She is thinking of her garden.

Soon it will be snowdrop time. Maybe already they’re stirring underground, getting ready to push through frozen earth. Each year there are more, their circle widening like ripples. She has planted them in the green to encourage them to spread, after they flowered, when the stems wilted softly and the small bulbils could be trowelled up and separated. Last year she did that, and the year before, and the year before. Two or three weeks from now, she’ll have her reward: the lawn under the pear tree will be pooled white, as if the tree has sprung into blossom early and dropped its flowers wet and shining into the grass. Soon after that will come the hellebores, and the first daffodils, and then the great rush of spring that comes upon her every year with no time to register each change.

Now, in the hollow after Christmas, everything seems frozen into suspension, waiting for the date that will soon be marked on the calendar. The end. The beginning. On that day, yet to be decided, she and Don will walk out of the house and hand over the keys and never come back. She would never have believed she could do it, but it’s easy after all. She can register quite dispassionately that the Christmas just gone is the last one here. There will never be another summer. Almost certainly she’ll see the hellebores and the
tête-à-tête
narcissi, but by the time her roses flower (
Cécile Brunner, Veilchenblau, The Pilgrim
; she loves the names as much as the roses themselves) the house will belong to the Baverstocks. ‘It’s what the house needs,’ Don said, after phoning the estate agent to accept the offer. ‘After so long.’

Yes. The house has been waiting for years, echoing to the memory of children’s voices. For too long the rooms have been full of absence, full of reproach. Now it will be a family home again.

‘You’ll love working on a new garden. You can take some of your favourites with you,’ Anna has suggested; ‘divide them, or dig them up altogether?’

But that would have meant starting two or three months ago, in the autumn, assembling a nursery of cuttings and divisions. Now isn’t the time, with the ground hard-frozen. Something obstinate in her refuses to salvage. Instead, she’ll walk away, leaving her treasures behind. It will be a final parting. Isn’t that the point?

Incident 27 by Scott Kinkade
The End of Gods (A Welcome to the Underworld Novel, Book 4) by Con Template
Enslaved by a King [Sold! 5] (Siren Publishing Everlasting Classic ManLove) by Anitra Lynn McLeod
Thomas World by Richard Cox
Endgame Novella #1 by James Frey
Feast of Fools by Rachel Caine
Falling Backwards: A Memoir by Arden, Jann
Betting on the Wrong Brother (What Happens in Vegas) by Cathryn Fox
Remorseless (Fractured Farrells: A Damaged Billionaire Series Book 3) by Mallory Crowe
Before the Dawn by Kate Hewitt
Our partner