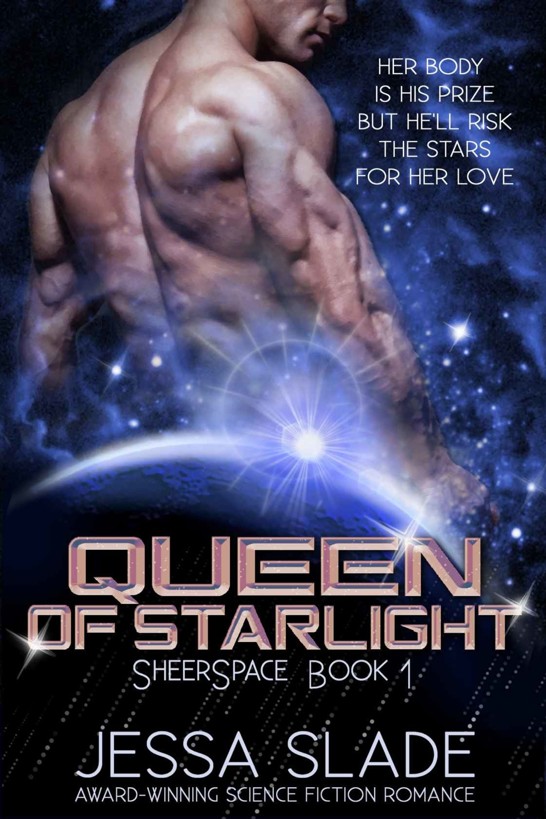 Transformed by empathic crystals into the perfect paramour, Benedetta Galil is the last treasure of her fading world. When raiders attack—seeking to corrupt the crystals and conquer all of charted space—she gives herself as a prize to the one man in the universe who values freedom over power. Mercenary sheership Captain Corso Deynah left oppression behind him on a burning planet and has no use for a sex slave, even one as seductive as Benedetta. But while he stubbornly resists her body, her fierce spirit tempts him, and he will risk everything—his ship, his seclusion, the very stars—to win not just her passion but her love.

Sign up for my newsletter and get breaking news on new books and sales.

Corso Deynah, captain of the
Asphodel
, was dreaming of space—of nothing, really—when the sharp buzz of an incoming priority one signal rattled the wall comm. He hated the convenience of two-way voice activation in equal parts for the laziness and the intrusion, so he’d disabled it in his stateroom a nanosecond after making the light cruiser sheership his own. Which meant he had to haul his ass out of the berth to answer.

Naked, he staggered through the darkness to the wall unit, secure in the knowledge he had left nothing to trip over. He slapped his palm over the comm to silence the buzz. Thumbing the light meter up a notch brightened the austere room from stygian to gloomy.

“What’s the thrice-tangled emergency, Patter?” The question sounded harsher than he intended. Dreams of nothing sometimes had that effect on him.

But instead of his first’s outer-system drawl coming through the speaker, the screen blazed to life with the vivid face of a woman. A stranger to him.

Less of a stranger now, he supposed. Judging by the way her citrine-bright gaze flicked up then down, his glitching comm vid had provided a wide-angle view and she’d already seen more of him than had any females of his intimate encounters recently. Recent in cosmological terms, anyway. This stunning female eclipsed those distant memories like the
Asphodel
’s powerful proton afterburners would obliterate an antique light bulb.

At least now he’d have something to dream about.

His finger hovered over the disconnect. “Wrong number, eh?”

She cleared her throat, a husky sound. “Captain Deynah?”

His brows rose in surprise. “Yeah?” He might answer the comm more often if Patter sounded like this. Low, warm, and just a little rough. Her voice matched the visuals nicely. She had the opulent coloring of a hydro orchid: white skin, root-dark hair in myriad looping braids around her round face, and vermillion lips that lured him in with the promise of nectar. In space, of course, flowers were rare and insanely expensive. And pests like him were kept far, far away.

Her yellow-green gaze drifted downward and paused. He didn’t bother hiding himself. When a man got up, well, sometimes he got up.

The amused quirk of those red lips, wrapping with a purr around the words, roused him more. The tug in his groin ached. Unused muscles were like that. He ignored the twinge and leaned toward the screen. “How did you break my ship’s secure thread?”

Her lips thinned, bleaching some of the wild color from their seam, and a hint of the red reappeared in her cheeks. Anger or remorse? Not that he cared, not when she’d broken into his ship.

“I have a proposition for you, Captain. Of the business sort. Perhaps you would be more comfortable in uniform.”

This time, he couldn’t stop himself from crossing his arms, but he straightened his shoulders too. “No uniform. I’m not military.”
Not anymore.

Fighting the tight stance, the scars across his shoulder blades pinged a reminder that the past might be behind him, but never all that far. And some memories, even an afterburner’s scorching plasma flare couldn’t wipe out, though his sweet
Asphodel
did her best.

On his screen, the gemstone sparkle of the woman’s eyes flickered behind a rapid blink of long dark lashes. “Maybe you’d like a robe then?”

Was that desperation in her raw honey voice? The thought bothered him more than he cared to admit. He didn’t want to be bothered, not by anyone—definitely not by anyone whose lips reminded him of nectar.

He snagged the gray coverlet off the bed and yanked it around his waist, knotting the ends at his hip. “I’m not a business man either.”

“An independent business man, shall we say?” Now she definitely sounded desperate.

“Say mercenary. That’s the naked truth.” He returned the quirk of lips she’d given him earlier, though he knew his smile lacked the velvety allure of hers.

She inclined her head so the looping braids brushed her high collar. “Very well, Captain Deynah. What I propose—”

Though the onscreen view was cropped tight to her face, the tips of her fingers crept into the frame when she touched her throat. The collar of her tunic camouflaged what she was reaching for, but from the placement of her hand, he guessed she was wearing a necklace, something she caressed for comfort, or as a reminder of her own. Like his scar, but probably prettier.

“I am Benedetta Galil of Qv’arratz. Due to an unprovoked attack, we find ourselves in need of immediate armed defense.”

A burst of adrenaline surged through his blood, but he squelched the instinctive reaction. “Didn’t I say already I’m not military? Contact your system representative.”

“I very much fear covert forces operating under Universalist Union orders may be the ones who attacked us.” Her fingers, still curled at her throat, moved when she swallowed. She was right to be afraid if planetary jurisdiction put her at the mercy of her own marauding government; no one else would help.

The innocent vulnerability made his hand fist in the coarse fabric around his waist, as if he could reach out and wrap his big hand around hers to smooth away the fear.

But he wasn’t looking for a fight right now, he reminded himself. And he never wanted
that
particular fight ever again. Vulnerable innocents might be saved—but only for a while. In the end, innocence died and vulnerability was forever. “You aren’t in danger at this moment.” He pitched his voice between a question and a statement.

“There was one high-orbit volley from outside our sensor range and an anonymous ultimatum delivered. We can’t hold off another assault with the resources currently at our disposal.”

The Universalist Union was generally considered civilized and orderly. It controlled access to numerous threads through sheerspace. And—like all the federations, alliances, and coalitions that had divided most of the known sheerways—the UU was always interested in acquiring more. The four hundred years since the discovery of the sheership biotech that provided access to the stars hadn’t been enough time to teach humanity to share. “Give them what they want.”

“And you think I will do what?”

She lowered her chin a notch and her clenched hands dropped out of the picture. “Dissuade them. You’ve done it before.”

The twinge across his shoulders sank deeper into his chest, toward his heart. That burned-and-bloody turn of fortune on L-Sept wasn’t a secret—hard to keep secret the total destruction of a planet; the orbiting body count in the Lasa system now went directly from L-Sext to L-Octo—but he didn’t want to be reminded of that either. “The price was high.”

“And we’ll pay you a matching price this time.” Her citrine eyes suddenly glittered. “Since you are a mercenary now, the terms will no doubt be adequate. You could buy a bed wide enough for more than one pillow. Perhaps even a robe.”

A weaker man in his state of undress might have withered at the astringency of her words, which seemed less vulnerable and innocent than a moment ago. Corso hardened his smile. “Send me your adequate terms. Obviously you already have my secure comm link.”

She nibbled at her lower lip, and for the first time, he noticed she was young, barely out of her second decade. The poise with which she held herself—not to mention those lips—had distracted him. “I don’t want my name sent across every—”

“You hacked my ship, Etta. I think we’ve already skipped the proprieties.”

Her gaze locked on his and narrowed, as if she wanted to read something written across his pupils. “I am called Benedetta,” she reminded him tersely. Then she glanced down and in a moment text scrolled across the lower half of his screen.

His attention fixed on the credit balance column. “You’d need double this amount to hire a private patrol—triple for an active engagement force. This wouldn’t cover armament or probable-kill bonuses.”

“The credits are not all we have.” Her tone wobbled then steadied again though her face in the screen was stiff and still. “Please continue.”

“A treasure beyond compare. To sell to the highest bidder for riches enough to make you a king. Or to keep for yourself to become the envy of kings.”

He lifted one eyebrow. “And if I keep scrolling down, is there a unicorn on the next page?”

The riot of color that had chased around her face blazed higher in her cheeks. Definitely anger this time. “Certainly even a mercenary such as yourself has heard of the l’auraly.” Gone was the lilting, almost poetic tone she’d used a moment before to peddle her alleged treasure.

“I’ve heard of unicorns too, but I still don’t believe in them.” He admired the way his amusement turned her yellow-green glare to sharp tarnished copper.

“You think the elected head of the joint Tiangu worlds imagined his l’auralya? You think the Priestess of Eldaq V was tricked into presenting her l’auralyo as her sacred consort?” She leaned in. With the closer focus, the gold flecks in her eyes blazed like miniature suns. “L’auraly have attended the births of nations and the deaths of emperors. They have inspired epics in every art form and breakthroughs in every branch of science. They have started wars and ended them. That is the payment—the extraordinary
gift
—I am offering you in exchange for a bit of armament and a few kill bonuses.”

Her vehemence startled him, almost disrupting his smirk. But he persevered. “I’m not saying they don’t have a clever story, or that the universe isn’t dim enough to buy it, but…”

She surged to her feet. For an instant, before the image reoriented to her new position, his screen showed a lascivious scan of her from throat to thigh in her close-fitted tunic, and his pulse heaved as if the
Asphodel
had tangled between the sheerways. In the confused blur, he caught a glimpse of the torque around her neck. The heavy necklace was out of proportion for her slender frame but it flashed with a brilliance that briefly blanked the screen.

When it refocused, she stood with her back to him, the silky folds of her tunic undone and draping low over her hips to expose her bare back.

His interest, which had waned with the sorry review of her credits, roused again.

His high res screen found no flaw in the orchid white skin from her nape or across the fine musculature of her arms and shoulders. And those flared hips… Just the right width for a man to dock himself like a ship come safely home to port.