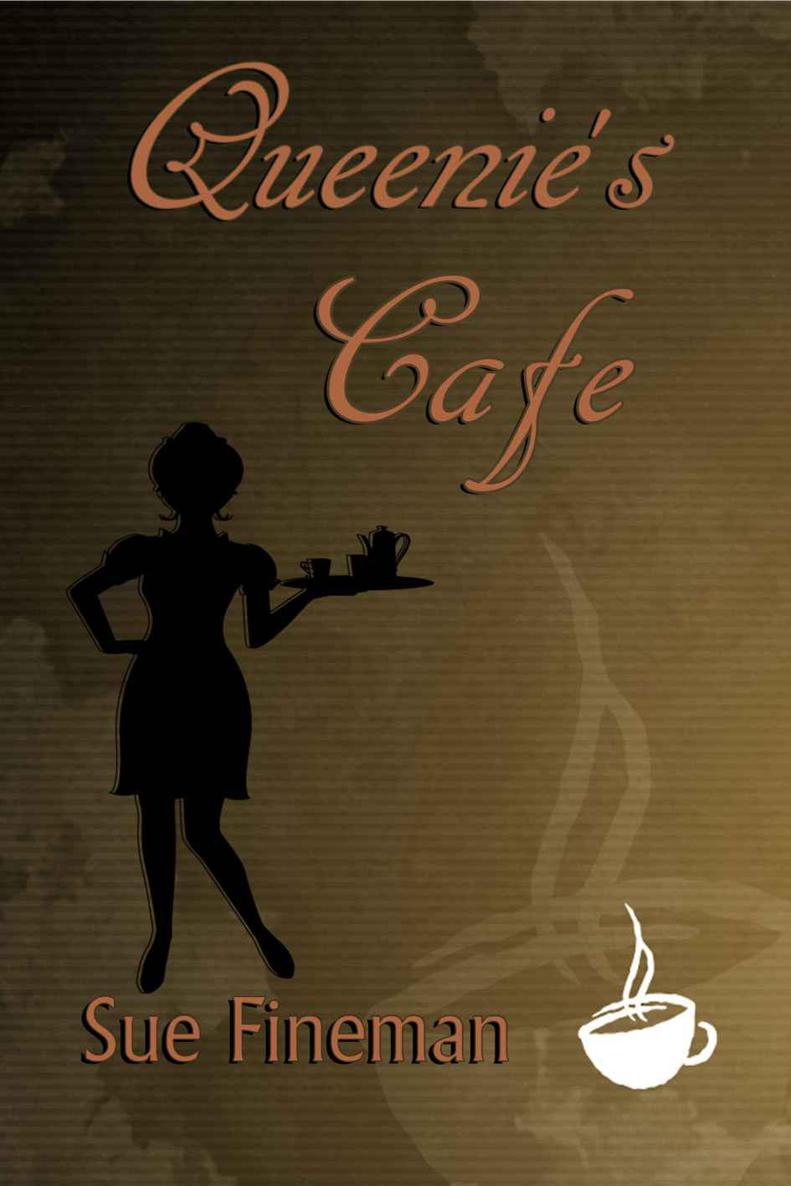 When Queenie dies, Laura inherits the family businesses in a small Florida town. She’s broke, the café is a filthy mess, the town banker tries to force her to sell, and a well-known businessman attacks her, but Laura’s biggest struggle is with the words Queenie left in her head. Queenie called her lazy. Laura is determined to make the café successful, something Queenie was never able to do.

Laura falls in love with Luke, but she nearly throws it all away because of her obsession with the café.

L
aura Whitfield huddled with her father under the big black umbrella in the pouring rain, waiting for the minister to finish the funeral service. If Queenie had ever had a sense of humor, she might have laughed at the irony of being buried on April Fool’s Day. Laura didn’t laugh, but she couldn’t summon any tears for the mother who’d never really been a mother.

The rain eased some, leaving the air thick and heavy.

She smelled a whiff of skunk. They were always getting squashed on the highway. Disgusting smell, but not an unfamiliar one. Even the skunk couldn’t overpower the strong fragrance of the creamy white gardenias on Queenie’s coffin, her father’s final gift to the wife he despised.

The service finally ended, the rain stopped, and the sun broke through the clouds. Laura handed the dripping umbrella to the man from the funeral home. “Thank you.”

“Not here, Dad.” She didn’t want to talk in the cemetery. Not today.

After a last glance at the coffin sitting over the open grave, she walked out to the car with her father. She sat quietly as he drove down the highway, through the little town of Kingston, the only place she’d ever lived until nine months ago, when Queenie threw her out of the café.

Not much had changed since she left home. Part of the fence shielding the collection of rusty old cars behind the Texaco station had blown down and several signs hung askew from winter storms. The town’s only traffic light was covered with rust. Everything rusted in this part of Florida.

The whole town looked old and faded and rundown, but no place looked as shabby as Queenie’s Café and the King of the Road Motel.
Home.

Dad didn’t speak again until he parked in front of the motel office. “I bought a life insurance policy on Queenie the year you were born. It’s enough for me to pay off all the bills and start over somewhere else.”

“You don’t want to stay here?”

“I never wanted to live here, but Queenie insisted, and then... well... it doesn’t matter now. Queenie owned everything here, and she left it all to you.”

“To
me
?” There must be some mistake. “Why would she leave anything to me?”

Without answering, he walked inside, and Laura followed.

“I found a little place near Ocala and put a deposit on it. It’s a fishing camp. Florence and I are going to run it together.”

“Don’t call her that,” he snapped.

“Sorry. It’s just such a surprise.” Shock was more like it. Her father kept a room in back for Florence, but she wasn’t there much. She’d come for a day or two, maybe three, and then they wouldn’t see her for months. Laura didn’t know her well, but she knew Florence had worked as a prostitute at one time. Maybe she still did.

He leaned on the counter. “It’s all yours now, the café, the motel, and the land.”

It was hard enough to believe Queenie was dead. Laura couldn’t quite wrap her mind around the fact that she owned the motel and café. “I can’t believe she left it all to me. She hated me.”

“Not as much as she hated me.”

“No. Queenie inherited the property from her parents, and I didn’t have a claim on it. I bought the life insurance policy on her after you were born. She had a bad heart, so I knew I’d outlive her, and I knew she wouldn’t leave me anything, even though I put the best years of my life into this dump.”

Why hadn’t he told her Queenie had a bad heart? What else had Dad been keeping from her?

She watched him sort through the drawers behind the counter. The motel had been his home since before she was born. Surely Queenie meant for him to have it. “I’ll put the motel in your name, Dad.”

“Don’t do that, Laura. I just want to get the hell out of here.”

A heavy silence sucked all the air out of the room. Her mother was dead, and all Dad could think about was getting away.

He walked into the apartment behind the office and she tagged along.

“The fishing camp is in real good shape and the fishing’s good, so Florence should be happy there. She loves to fish.”

“More than I ever loved Queenie.”

“Even with the things she’s done to earn a living? Doesn’t that bother you?”

A big truck roared past on the highway and Laura stared out the window. She felt like crying, and it wasn’t because they’d buried her mother today. She couldn’t believe he was leaving her here alone. He didn’t care what happened to her as long as he didn’t get stuck here himself. At twenty, she was old enough to be on her own, but she couldn’t run two businesses by herself.

“I don’t have any rooms booked except for the regulars and you know more about running that café than I ever did.” He was all business, as usual.

Laura watched her father pull off his coat and tie, the only coat and tie he owned, and hang them in the closet. He looked different all dressed up. His standard uniform was a stained white T-shirt and baggy pants, and he usually had a cigar clamped between his teeth.

Where was his cigar? “Dad, did you quit smoking?”

“She says she’s going to throw out all my T-shirts and buy me some decent clothes.”

“Good for her. I’m glad you have someone, Dad.”

Whatever love her parents shared in the beginning of their marriage had disappeared many years ago. Laura couldn’t remember ever living with her mother. She’d always lived with her father in the manager’s apartment at the motel, while her mother lived in the motel room directly behind the café. She didn’t even know Queenie was her mother until she started school. It had always been just her and Dad.

They wandered into the tiny kitchen and Laura sat at the table in the corner. He pulled two soft drinks from the refrigerator and handed one to her. “I propped the door to Queenie’s room open and left it as it was. As far as I’m concerned, you can throw everything away, including the bed. There’s nothing there anybody would want.”

“How am I going to run this place by myself?” Neither business brought in enough to hire someone to help.

“I’d start with the café, get it cleaned up and in working order.” He sat down and popped the can open. “When it starts bringing in money, you can hire someone to run it while you work on the motel. The rooms need to be renovated, but you can do it one room at a time. If you’d paint and add some flowers and shrubs outside, it might make it look a whole lot better. Maybe you could attract a better clientele.”

“With
what
, Dad?” She didn’t have the money to do any of that. She had enough to get by for maybe a month and then she’d either have to open the café or find a job. The three regulars at the motel barely brought in enough to cover the expense of keeping the motel open, and Morris and Rusty often ran out of money before they paid their motel bill.

“If you want to stay, apply for a small business loan. Get enough to fix things up and get started. If you don’t want to keep it, then find a buyer. Sell the whole thing off and start over somewhere else. You know more about running a business than I did when I took over the motel. You’ll do fine.”

He made it sound easy, but he wasn’t the one being left behind.

While Dad drove to the liquor store for boxes, Laura wandered around outside. There were so many things to do, she wouldn’t know where to start. Cracked windows. Patched roof. Faded, chipped paint. Corroded hinges. Noisy air-conditioners that dripped rusty water on the sidewalk. The parking lot was in terrible shape, the asphalt so badly cracked the weeds grew through it. And that was just the outside. It was a constant struggle to take care of property in this warm, damp climate. Anything not rusted or mildewed was faded from the strong sun.

The door to her mother’s room stood open and Laura walked inside. She felt a deep sense of sadness for what might have been. Although she’d worked with Queenie in the café from the time she was eight until she turned nineteen, she and Queenie had never had a real mother-daughter relationship.

The Language of Food: A Linguist Reads the Menu by Dan Jurafsky
If Today Be Sweet by Thrity Umrigar
Step Brother: Off Limits by King, Jayna
Skylar’s Devotion by Marisa Chenery
Killer Dolphin by Ngaio Marsh
Nightmare Academy by Frank Peretti
The Untethered Soul by Jefferson A. Singer
Ink and Steel by Elizabeth Bear
Burning For Claire (The O'Connell Family Book 2) by Steele, C.M.
Sing Me Your Scars (Apex Voices Book 3) by Damien Angelica Walters
Our partner