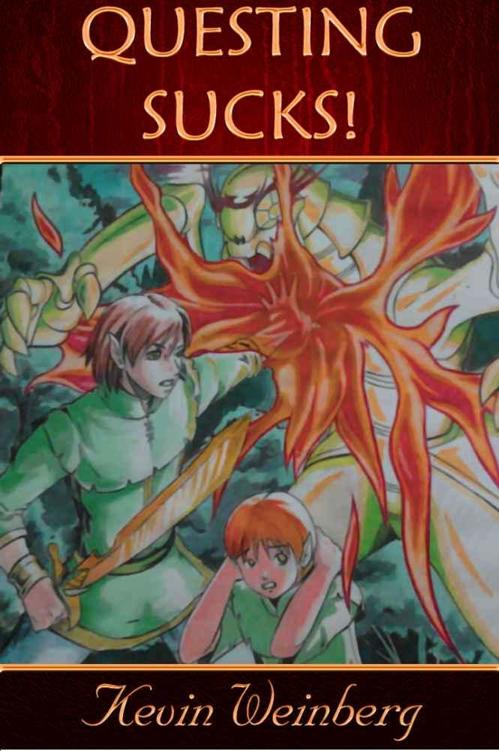 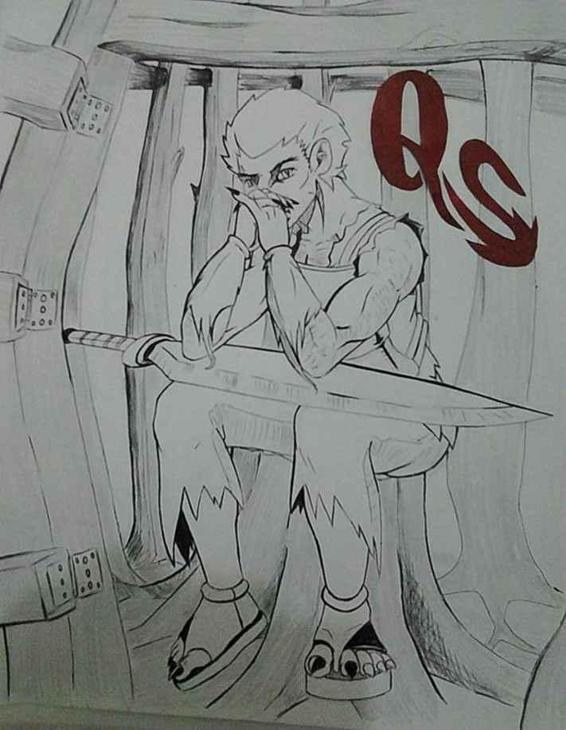 First published in the United States by
Kevin Weinberg
2014

Except as permitted under the U.S. Copyright Act of 1976, and the United Kingdom Copyright Act of 1956 and 1988. No part of this publication may be reproduced, distributed or transmitted in any form or by any means, or stored in a database or retrieval system without the prior written permission of the publisher, nor be otherwise circulated in any form of binding or cover other than that in which it is published and without a similar condition including this condition being imposed on the subsequent purchaser.

Illustration and cover by
Paul.V.Bongcac

Chapter 1: The Elf with the Human Tongue

Chapter 4: Sehn is Better than Everyone Else

Chapter 5: And Off We Go

Chapter 12: Sehn vs. the Overseer

Chapter 14: Over my
Dead
Body

Chapter 17: What is mine

Chapter 20: Cah’lia, Rina, Sehn, and Nero: a Declaration of War.

Chapter 22: Grace of the Light

Chapter 28: Prince Patrick, for Love of the Land

Chapter 32: Not this time

Chapter 34: Telegraphing, and why you Shouldn’t do it.

Chapter 37: The Kingdom’s Pillar of Hahl

Chapter 42: Impossible to Deal with

Chapter 47: Once Was Too Much

Chapter 48: Letter from a Friend

Chapter 49: To Come with the Rising Sun

Chapter 50: Use with Caution

Chapter 52: The Shattering of Destiny

Chapter 53: From the Heavens

Chapter 54: In Fire and Flames

Chapter 57: The Elf with the Human Tongue, Part II

Chapter 1: The Elf with the Human Tongue

The Great Sehn, lord of the universe, champion of the stars, and God-King to the citizens of Elvar, marched down the narrow dirt road, which led to a cliff overlooking the ocean. The earth shook with each of his steps. He held his head high. Today, he would finally best Calen in a duel.

As expected, Calen and his lover were sitting on the north end of the cliff with their legs dangling over the side, their fingers intertwined. Calen, a young swordsman from the Naris clan, narrowed his eyes as he leaned closer to his mate. He pulled her towards him and placed his mouth over her ears. Sehn couldn’t hear Calen’s words from this distance, but he knew what the male was reciting: that gross, sappy love oath.

“You are my heart. You are my love eternal. You are all that was or will ever be for one such as myself.”

“To prove mine love to thee,” he said, loud enough for Sehn to overhear, “I shall play mine harp.”

They kissed again. Their lips collided in a vibrant display of passion. Sehn nearly lost his cool as Calen picked up his golden harp off the rocks and began to hum a song while he played a melody for his love.

I can’t believe he’s actually playing the harp,
Sehn thought.
Who does that
?

Sehn knew he couldn’t let things go any further. He’d come here to best Calen in combat, not watch him exchange love vows with some Wood-tribe wench. He inhaled and cupped his hands over his mouth. “Calen!” he shouted. “Cease courting that ugly bitch and get down here at once! Your God-King challenges you to a duel!”

As if struck by lightning, Calen jerked away from his lover. His eyes scanned the forest below him.

“Se-Sehn, is that you?” he called down, a hint of recognition in his voice.

Sehn marched the rest of the distance, entering plain sight. He enjoyed the look of outrage on Calen’s face.

“Sehn!” Calen cried out. “Thou dareth to disturb mine love oath? I shall have thy head for this treachery most foul! Oh, how I detest thee, you dried out pair of Wibbledoms. You…you Mountain-Lanx pot of rotten stew!”

The male, Calen Ariat, first son to the chief of the Naris clan, second in line for Sword-Dominion of Elvar, leapt down from the opposite side of the cliff with a thud, crushing leaves beneath his feet.

“I accept your duel, you buffoon. But knoweth you this: despite all treacheries prior, now is the dawn upon your last sacrament act. For no longer shall it be, that whilst mine own rage thunders over this land, too shall yours be concluded!”

Sehn blinked. “What in the holy fuck are you trying to say to me? I didn’t catch a word of that. Eh, whatever. My Human buddies are coming over for drinks. I don’t have time for this, Calen. Let’s settle this quickly.”

Sehn laughed at the partially nude Calen, who hissed and turned around to reach for his blade, which he’d kept concealed in the shrubbery at the base of the cliff.

“Defeat me shall you not, Sehn, son of Suhn!”

“Defeat you shall I so, Calen, son of
goatpenis
!”

With that, Calen raised his blade. It was pure Elvin steel, the highest quality in the world. Neither Dwarven nor man-steel came close to replicating its utility and power in battle. Wielding such a force, Calen charged, his weapon raised and ready to kill.

Hah! This fool thinks he can defeat the Great Sehn? I don’t even need to use my blade.

The ground below Calen exploded, sending rocks and dirt scattering. His feet were knocked from under him, and he fell face-forward into the mud. His jaw clipped a rock during his fall, and he moaned as he rolled over, grunting in pain. The sword slid out of his hand.

“I’ll be taking that,” Sehn said. He walked over to the groaning Elf. Reaching down, he retrieved his shiny new prize. It would fetch quite a price on the market.

Calen grabbed his foot, and his eyes took on a pleading gleam. “You mustn’t. Please, I have already lost.
‘Tis
the blade of my father that now you sully. Taken by you, so too must it not be, that along with my honor has fled me my faith!”

Sehn reached into his pocket and revealed a small metal flask. Kneeling down, he displayed the contents to the fallen Calen.

“Do you see this? This is my care-cup. What can you tell me about my care-up?”

Calen paused before speaking. His eyes filled with confusion. “Well, I…must so it be said, on first appearance its contents would be naught.”

The Cockaliths were a terrible monster, despite their humorous name.

Calen’s eyes briefly widened in anger, then closed as he passed out. Sehn smiled and walked away with his new weapon, laughing as the woman ran to her lover’s aid.

Magic is so awesome.

Among Elves, only one in a thousand could use the Grace of the Light, or, Magic as Sehn called it. Magic was studied, examined, and preserved by those who could use it, but they were all fools. Magic was meant to be used for nothing other than party tricks and personal gain. Anyone who used it for anything else was an idiot. Sehn never understood all the worshipping of it the Elves did—worship was a waste of time. Also, Elven women loved magic.

Thinking of such, Sehn left the two to their business. He would traverse the forest and return to town. While he was very much in the mood to start fights and steal, he decided he would first return home and store away his new weapon.

He laughed. Magic was just so awesome.

Sehn wandered the city, looking for some way of abusing his magic. Elvar was a beautiful place, filled with giant, lush trees with dangling ropes to allow easy climbing. Homes were nestled into each layer, so that from the bottom to top there were windows, clotheslines, and tapestry.

The more wealth an Elf possessed, the higher in a tree he or she could live. Sehn had only one dream: he wished to be the richest being in the world and have many servants. And not just many servants, but an abundance of them, even some that served no purpose.

Sehn had spent many hours dreaming of what life would be like once he had obtained more power. People should get that which they deserved, or at least that’s what Sehn had always believed, and Sehn deserved nothing less than to have two Elf-maidens fan him during warm summer days while a third Elf-maiden fed him grapes.

He wanted a servant that would rinse his bum after bowel movements and another to dry it. He would not settle for just one or the other, and why should he? He deserved both. Anything less was both unreasonable and uncalled for.

Sehn halted when he heard the sound of someone calling his Godly name behind him.

It was a boy’s voice.

“Yo! Sehn, I’ve been looking everywhere for ya.”

Sehn frowned as a little Elf, who beamed with delight, came running over to him. He had only been through seven naming days. He still had puffy cheeks and a round, smooth face. His ears were not yet pointed, and his smile was bright and vivid with the color of youth.

“Let’s go do some fun stuff, Sehn,” Nero said. “I stole a whole bunch of Moon-Crackers from the shop on Oakley. Do you want some?”

Every day Sehn tried to pick on the kid, but for some reason he simply couldn’t. He had no idea why he never tortured the boy; it went beyond his own understanding. Nero was the only one in the city who not only showed Sehn no fear, but also tried to follow him everywhere he went.

“Shouldn’t you be speaking proper Elven?” Sehn asked. “You’re starting to sound like me.”

“So, anyway,” Nero began, “I was thinking we could go exploring the Death Woods to the south. I really wanna know what’s in there.”

“You know why they call it the Death Woods, yes, Nero?”

Nero beamed with curiosity, his small ears flapping with wonder. “No, tell me!”

“Because when you go there you
fucking die!
Now, stop being stupid and run back home. I’ve no time for brats. There’s money and fortunes to be made.”

Sehn couldn’t afford to waste any more time with the boy. His Human friends were coming over from Man-
dar
, the capital city of the Humans…or at least that’s what Sehn called it. He never bothered to learn the name, because Sehn felt learning was for suckers. The Great Sehn learns nothing! If he didn’t know something, it needed to change to meet his perception.

Sehn made his way through the vast expanse of Elvar, through massive oak trees with holes cut in the middle and water flowing through them. Everywhere he looked, he saw the signs of his wondrous civilization. Ropes lined every tree on every level, creating something resembling a giant net. People crossed from every height, going about their day’s work. Some held baskets, while others held water jugs, but all were shuffling back and forth in their daily chores.

The House of Hardie by Anne Melville
The Highly Selective Dictionary for the Extraordinarily Literate by Eugene Ehrlich
Otherworldly Maine by Noreen Doyle
The Wedding Tree by Robin Wells
L5r - scroll 03 - The Crane by Ree Soesbee
The Real Mary Kelly by Wynne Weston-Davies
Ouroboros 4: End by Odette C. Bell
The Stranger by Simon Clark
Heretics by Greg F. Gifune
The Dragon's Wrath: Shadows in the Flame by Brent Roth
Our partner