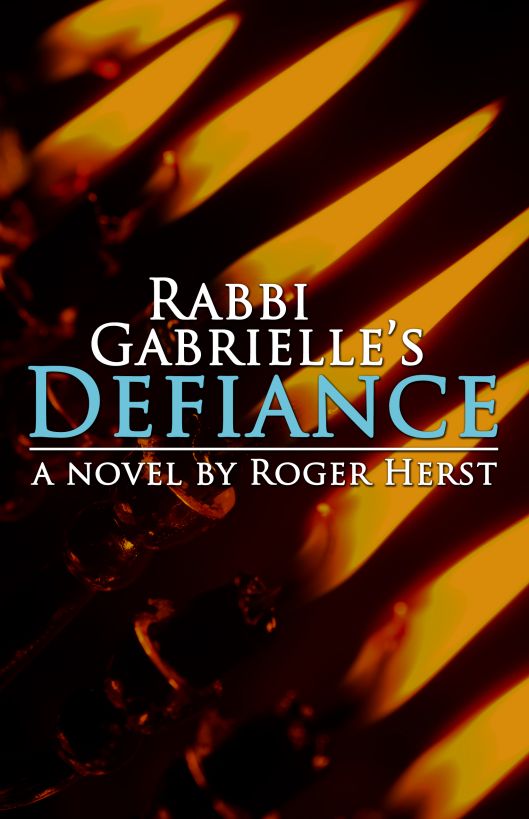 See the end of this book for teasers!

A Division of Diversion Publishing Corp.

All rights reserved, including the right to
reproduce this book or portions thereof in any form whatsoever.

Snowflakes dusted the trail before her like
confectioners' sugar. The steady clip-clap of footsteps on the
fire-road leading from the hotel alerted Rabbi Gabrielle Lewyn that
she was not alone. Before the first light of dawn, a distant
pounding of feet on the perimeter of the golf course meant little.
But when these steps continued through a low-lying valley into the
flanking hills, her indifference turned to worry. She shifted from
a relaxed jog to a moderate run by arching from the flat of her
feet onto her toes and increasing speed. In the inchoate light
before sunrise, her imagination brooded over several possibilities
– none good. It wasn't likely her pursuer was a
meshuganah jogger
like herself, one foolish enough to
risk bad footing in poor light on an Appalachian mountain trail, or
someone like herself who just enjoyed the nip of chilled morning
air on her face. Why, she asked, had she unnecessarily placed
herself into harm's way with retreat to the safety of the hotel
blocked?

To escape, she contemplated plunging into
thick foliage bordering the road, but rejected the idea. In the
pre-dawn gray, vines and branches were certain to impede her
flight. And how might she expect to avoid fallen trees barring her
path? Despite the fact that every step took her further from
safety, she decided to outdistance the pursuer by plunging deeper
into the unknown. Would exhaustion slow her legs before his? Lungs
that were already feeling the additional strain could not be
expected to provide an unlimited supply of oxygen. How different
this was from the relaxed jogs beside the Potomac River near her
new Bethesda townhouse in suburban Washington, D.C.

Frozen air chipped at her cheeks and snaked
around the edge of her gloves to attack the flesh beneath. As her
lungs pumped vapor into the air, she could hear their gasps for
oxygen, echoing from what appeared to be a thick wall of sycamore
trees lining the fire road. Aware that the race was just beginning,
she resisted a temptation to accelerate into a full sprint. Sure,
she could put on more speed, but only at the expense of her
endurance. If she couldn't outrun her pursuer she'd have to
out-distance him. This was no time for panic, yet she sensed her
brain losing control and her limbs running on autopilot. A pale
light from the sun now peeking through the lower tier of the
leafless winter forest momentarily lifted her spirits. Blessed be
the dawn! She muttered a short petition to feel the sun's warmth on
her chilled cheeks just once more.

The sudden appearance of a small creature on
the roadbed, a hundred feet ahead, presented a new challenge. She
expected it to be as alarmed as she and scamper back to the
security of the forest. But as the intervening space decreased
exponentially, it appeared to be on a collision course with her!
There was no time or room for evasion. In the last few feet, she
was relieved to see that what she thought to be a wild animal was,
in fact, a housedog with short, powerful legs.

Her first impression associated it with her
pursuer. In a moment of confusion, she eased rather than increased
her pace. The dog thrust its tail high and commenced barking. Gabby
slowed still more, prepared to avert collision. The animal took no
evasive action and darted between her feet, obliging her to skip
sideways in order to avoid stumbling. She re-established her
balance while identifying the white and tan markings of the beagle
family. The creature's tail wagged with what appeared to be an
invitation to play. Her dancing steps seemed to encourage rather
than dissuade it.

By the time she recovered momentum to press
on, it was too late. She had managed only to take several forward
strides when hit from the rear by a massive body. Impact swept her
from her feet and eliminated the ability to resist. A moment later
her right hip crashed onto the roadbed, with the attacker splayed
over her like a quilted afghan. Freezing rocks encrusted with ice
gouged her cheek and right nostril. Her arms, trapped tightly under
her torso, were useless to wedge breathing space. Wiggling was all
she could manage as the attacker shifted his weight to keep her
pinned down. His mass made it impossible to replace air expelled
from her lungs during the fall. She had read numerous accounts of
rape and heard many personal testimonies. An attack under her
clothing was certain to happen. Capitulation was not her style and,
as long as resistance was possible, she would kick and squirm. In a
rare moment of self-pity, she berated herself for having agreed to
come to White Sulfur Springs and participate in the Democratic
National Committee's annual retreat. When she accepted the
invitation, she had a queasy feeling it was a bad choice. This
would teach her to listen more carefully to her instincts – that
is, if she got a second chance!

Rabbi Gabrielle Lewyn's role in one of the most
celebrated rape trials of the decade along with her help in
breaking up a gunrunning syndicate in the District of Columbia
attracted the attention of Washington's political establishment.
Women's groups requested her to speak at their conferences and
rallies. Radio and television talk-show hosts hounded her to
comment on the Jewish view of everything from capital punishment
to, what she liked to joke,
sewage problems in
Buenos Aires
, about which she was the first to admit she
knew absolutely nothing. Political organizations bombarded her with
invitations to an endless array of receptions and convocations. Few
realized that her rabbinical duties as senior rabbi at Congregation
Ohav Shalom consumed nearly every moment of her day, leaving little
time for activities outside the synagogue. Fortunately, her
dedicated secretary, Charles Browner, was masterful at graciously
declining invitations, except when an event caught her fancy, such
as the Democratic National Committee's annual retreat in West
Virginia.

When the DNC Director personally asked her to
conduct
Chanukah
and
Shabbat
services on Friday evening, how could she say
no? Despite an inclination to dismiss modern politics as a gutter
sport, she welcomed an opportunity to meet influential politicos.
Still, the same invitation to a conference at the Orlando or Las
Vegas Convention Centers would have produced a different response.
But not the Greenbrier Hotel, which she believed to be a national
treasure. Operated almost continuously as a spa and resort since
the nation's colonial beginning, its palatial public rooms, massive
stone hearths, and kitchen specializing in all-American cuisine
from the Allegheny Mountains, wreaked with history and tradition.
To a sports minded person like herself, the hotel's pools and spas,
in-door tennis courts, and an ice rink, its matrix of riding,
jogging, and hiking trails zigzagging through outlying foothills
were irresistible.

"Don't shoot! Don't shoot!" her attacker bellowed.
It took a moment for her to appreciate that he wasn't yelling at
her. Apparently, there were other people nearby, perhaps someone
rushing to rescue her! "Homo sapiens! Don't fire! Don't fire!" her
attacker continued.

"What the hell was he yelling about?" she
asked herself, still gasping for air. And to whom? And this
business about
Homo sapiens
? Was he an
Appalachian mountain man, nutty as a fruitcake? Mention of shooting
confused her further. She didn't hear any shots.

"Hey… down there," her attacker howled.
"You've got people here. Careful, fellows!"

For the first time she became aware that the
body pinning her down was lean and muscular. It felt as though he
were waving a free arm. As his weight shifted, she ratcheted one
arm free to press against the ground and create space for her lungs
to expand.

"Okay… Okay, watch it down here!" he
continued.

An instant later, he rolled sideways
providing blessed relief, his right knee angled on the roadbed
beside her. "Sorry, sorry, lady," he said, shifting his weight. In
the act of scrambling to his feet he appeared to be extremely
nimble. She gathered herself onto her knees to observe him jumping
vertically in place and waving his arms like a cheerleader at a
basketball game. From this vantage point, his Adidas shoes were
soiled and worn and a knee poked through a hole in his baggy cotton
sweatpants. The beagle continued to circle them, darting forward
then back in an effort to reenter a tangle of bodies and entice
newfound friends into a game.

Gabby was testing her legs to stand as the
dog's wet snout greeted her. And instant later, she saw two men in
camouflage dungarees emerge from the trees fifty yards away.

"Hunters," her attacker announced while his
arms remained in motion. A faded red sweatshirt covered his chest
and a Yankee's baseball cap shadowed most of his face. A hand in a
knitted-woolen mitten reached down to help her onto her feet. She
wasn't certain she wanted assistance from someone who had just
tackled her. Besides, she needed a moment to evaluate her injuries.
Her wrists and cheek burned from abrasions. Blood oozed from her
right nostril and stained the back of her glove. No doubt there
were cuts elsewhere. More disconcerting, a deadening ache pulsed
through her hip.

High cheekbones, dark eyes, and a flat but
symmetrical nose identified her attacker as Asian. As a native
Californian who grew up near a large Oriental community, Gabby
could usually distinguish different ethnic groups. By the broad
shape of his head, she guessed Korean.

"Where were your brains, lady?" he snapped at
her. "Don't you know it's deer season in these parts? You've got
the wrong colors on. If you must jog during the season you don't
wear beige. The only thing that would make you look more like a
buck is a rack of antlers. Trigger-happy hunters would love to
blast off a few rounds at you and, believe me, they're
all
trigger-happy at the beginning of the season. The
motto in these parts is: 'If it looks like a buck, shoot it. If it
doesn't look like a buck, shoot it anyway. If it's a whitetail doe,
kill it and claim you were sure you saw a rack. And, lady, the way
you're dressed, you fit all categories."

The dog resisted it's master's whistle to
return. Why resume hunting when there were new friends to play
with? They called her name,
Cindy
, four
times, then one blew a high-pitched taxicab whistle through his
teeth.

"Sorry about frightening you," the attacker
apologized a second time. He invaded her space to use the cotton
arm of his sweatshirt for swabbing blood from her nostril and
examined her face for additional injuries, uncertain whether to
console or reprimand her further. "We're too far from the hotel for
a stray dog. When I saw this critter dart from the trees, I figured
there had to be hunters nearby. In thick woods they usually work
close to their dogs. Knocking you down was the only way to get you
out of their gun sights quick."

The rising sun, now flickering through a
tangle of forest, highlighted the hunters, rifles in hand, and
still unaware of what transpired a moment before they emerged onto
the fire road. From their view, there was no need for anyone to
yell at the top of his lungs and spook game in the area.