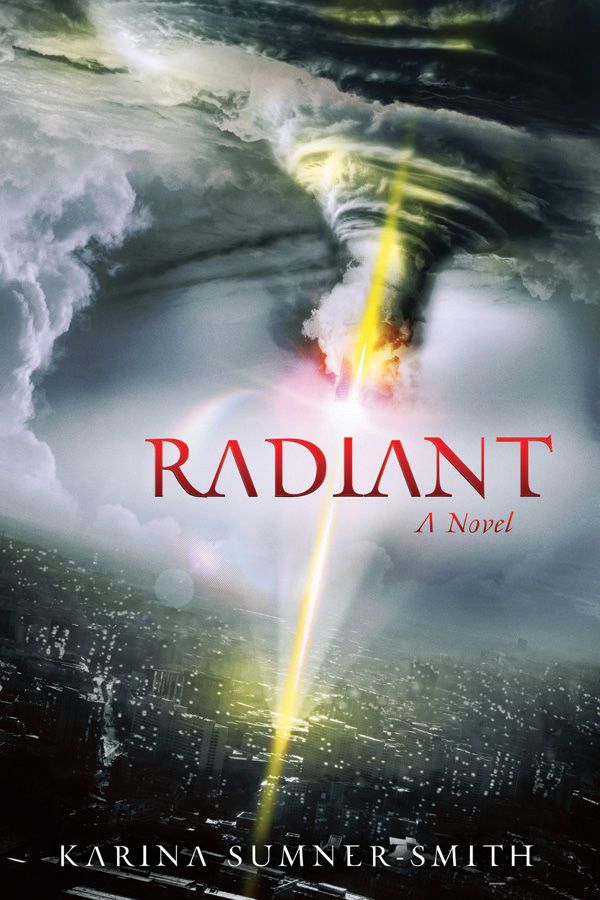 Sumner-Smith’s excellent, subtle, wringing world-building abilities are supported by her clean, clear, precise wordcrafting.
Radiant
is a book that is both a joy and a pleasure to read, with a breathtaking climax that rivals the greatest scenery pieces of the blockbuster films, and an ending that is both satisfying and intriguing, which promises a greater world filled with bigger and brighter mysteries for Xhea, Shai, and all those who dwell in the Lower City, a place—now that Xhea and Shai are in it—is no longer without hope.” —J. M. Frey, award-winning author of
Triptych

“If C. J. Cherryh wrote fantasy with a futuristic feel, it would have a lot in common with this book, especially the protagonist. Excellent work, and recommended.” —Michelle Sagara,
New York Times
bestselling author of The Chronicles of Elantra series

“Finally! A
Blade Runner
for the fantasy crowd. Magic as you’ve never seen it before.” —Violette Malan, author of the Dhulyn and Parno series and the Mirror Lands series

“This beautifully written page turner is topnotch. A world that comes alive, rich and magical; characters you want to spend time with; a heroine to root for; trust, friendship, and belonging—
Radiant
has it all! Fantasy not your cup of tea? You should read this one anyway; it deserves space on every bookshelf. Where’s the next one?” —Ed Greenwood, creator of The Forgotten Realms® and
New York Times
bestselling author of
Spellfire
,
The Herald
, and many others

“A first novel
Radiant
may be, but by a writer at the top of her craft. Be taken to breathless heights of imagination. Feel your heart pound until it almost breaks, then sigh for joy. This, dear readers, is the story you mustn’t miss and will never forget. Recommended? No. I insist. Read
Radiant
.” —Julie E. Czerneda, author of
A Turn of Light
“An imaginative and original tale of struggle, sacrifice, and friendship within a harsh cultural landscape.
Radiant
is a vibrant debut, infused with pure magic and strong characters.” —Amanda Sun, author of
Rain

“With a clean, evocative style . . . a clever transposition of corporate warfare into a feudal future, and a strong, complementary pair of protagonists, Sumner-Smith’s Tower Trilogy is off to a captivating start.” —
Publisher’s Weekly
, starred review

“Thank goodness this is the first book in a trilogy, because you’ll definitely be wanting more when you’re done.” —
Girls in Capes

All rights reserved. No part of this book may be reproduced in any manner without the express written consent of the publisher, except in the case of brief excerpts in critical reviews or articles. All inquiries should be addressed to Skyhorse Publishing, 307 West 36th Street, 11th Floor, New York, NY 10018.

Talos Press
®
is a registered trademark of Skyhorse Publishing, Inc.
®
, a Delaware corporation.

Dedicated with love to my parents,
Lindy and Martin,
for always believing.

Curled in a concrete alcove that had once been a doorway, Xhea watched the City man make his awkward way through the market tents, dragging a ghost behind him. Magic sparkled above his head like an upturned tulip, deflecting the heavy rain and letting it pour to the ground to trace a circle in the puddles at his feet. He was, of course, watching her.

It was not his attention that had caught Xhea’s notice, nor his poor attempt to blend into the crowd, but the ghost tethered to him with a line of energy more felt than seen. The dead girl couldn’t have been much older than Xhea herself—sixteen, Xhea supposed, perhaps seventeen—and she floated an arm’s span above the man’s head like a girl-shaped helium balloon.

For fifteen minutes the man had circled, pretending to shop. As if a City man had any use for reclaimed nails, half rusted and pounded straight; for prayer flags, or charms of electrical wire and bone. What was it, Xhea wondered, that made the ghost-afflicted wait for the darkest, rainiest days to seek her out? She snorted softly, a sound without care or pity. They didn’t want to be seen with her, that was the truth of it, as if her very presence left a shadow that wouldn’t burn away.

As she waited, Xhea tied a coin to the end of a braid of her hair with a bit of tattered ribbon. The coin was an old and dirty thing she’d found in the abandoned shopping corridors that wound beneath the Lower City. Once it would have bought her bread, cigarettes, a warm place to sleep. Now it was nothing but a bit of shiny metal that watched with the pressed eyes of a dead Queen, its only magic a sense of the past that hung about it like the faint scent of something sweet.

She had started braiding another length of dark hair before the man made the decision to approach. He walked toward her with his head down, as if a slumped posture might make him any less conspicuous, as if half the market didn’t watch him go. He came to stand before her narrow shelter and stared without speaking, the heavy rain falling between them like a beaded curtain.

Xhea eyed him in silence: his polished shoes, dotted with water; the neat line of his jacket; the monogrammed cuffs that peeked from his jacket sleeves. Only the clean cut of his tailored pants was marred, and that by the slow curl of his fists within the pockets. He straightened, pulling himself upright as if to get every intimidating inch from his average-sized frame.

She held his gaze as she pulled a cigarette from one of her oversized jacket’s many pockets and placed it against her lips. From another pocket she drew forth a single match, thankfully dry, which she struck with a practiced flick. Cigarette lit, Xhea leaned back against the concrete.

She exhaled. “Well what?”

“I can see that,” Xhea said, and returned the cigarette to her lips. She smoked in contented silence.

“I was told,” he said, as if she were far younger than her apparent years and dreadfully slow, “that you can help people with ghosts.”

Xhea snorted and flicked away a bit of ash. “Try asking nicely. Try saying ‘please.’ You’re the one who needs help here, not me.”

The man looked from her braid-tangled hair to her dirt-crusted nails and all the mismatched layers of clothing in between, disbelief plain. “Look, I came here—” he started, then shook himself. “What am I doing?” he muttered. He turned away, running his hand through his thinning hair as he walked. Yet his ghost remained, her tether stretching: a clear indication that the man would return.

Xhea smoked slowly, watching the ghost. She floated, serene, eyes closed and legs folded beneath her, lost in dreams. The ghost’s hair was pale, her skin paler still, each appearing in Xhea’s black-and-white vision as a faintly luminescent gray. The ghost girl’s dress was more vivid, hanging in loose folds that appeared almost to shimmer, the fabric untouched by rain.

Red, Xhea guessed, from the energy it exuded. She rather appreciated the contrast.

What was their story, she wondered. Too young to be his wife, unless his tastes ran to the illegal; too calm to be the victim of a hit and run or the unlucky bystander in a spell gone awry. His daughter, maybe. How touching.

Had illness taken her? But no, these were City folk, through and through. Illness was rare in the City, true disease rarer still, health and long life all but guaranteed by their magic. Suicide, then? Perhaps her father had killed her.

Xhea exhaled a long breath of smoke as the man again approached.
Come to my temple
, she thought to him mockingly. Three walls of concrete and one of rain; a cloud of tobacco for incense.
Come pray for your ghost.

He stood before her for a long moment, staring. “You’re too young to be smoking,” he said. The words were slow, tired: an admission of defeat.

“And she’s too young to be dead.” Xhea nodded toward the ghost that once more hovered above his left shoulder. The coins in her hair clinked with the movement. She had to give him this: he didn’t flinch as she gestured toward his ghost; didn’t look above his head as if her attention might have brought the invisible to light.

Blackbird by Nicole Salmond
A Need So Beautiful by Suzanne Young
Unseen Things Above by Catherine Fox
Already Dead by Stephen Booth
Ice Kissed by Amanda Hocking
Duty Before Desire by Elizabeth Boyce
House Haunted by Al Sarrantonio
Spiral by Paul Mceuen
Build a Man by Talli Roland
Past by Hadley, Tessa
Our partner