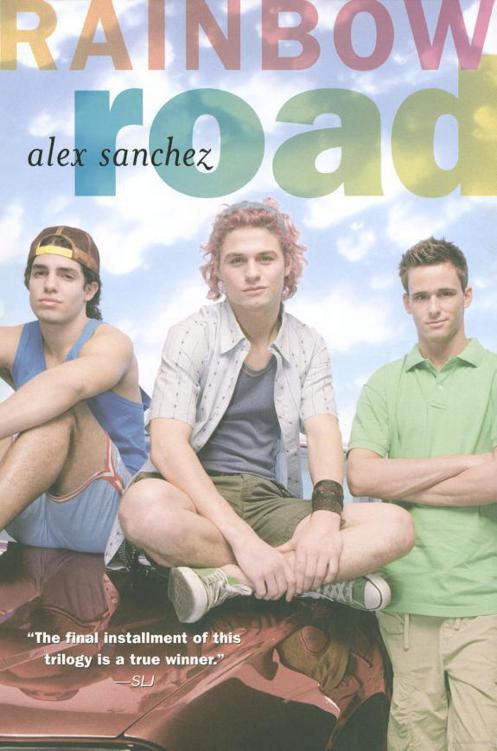 So Hard to Say

Al rights reserved, including the right of reproduction in whole or in part in any form.

The text for this book is set in Mrs. Eaves.

Summary: While driving across the United States during the summer after high school graduation, three young gay men encounter various bisexual and homosexual people and make some decisions about their own relationships and lives.

Kyle Meeks stirred from a sex dream, vaguely aware of a ringing phone.

Blinking at the summer morning sunlight, Kyle grabbed the receiver on the nightstand and cleared his throat. “H-helo?”

“Hey, Sleeping Beauty!” replied the boy from his dream. “Wake up!”

Kyle had met Jason four years earlier, on the first day of high school. Kyle had jostled through the crowded hals, lost, til Jason helped him find his homeroom. But not til senior year, when Jason stepped into a gay youth meeting, did a chain of events unfold that led to their becoming friends and faling in love.

None of it made any sense to Kyle’s groggy brain, especialy since they’d graduated high school two months earlier. Not to mention that they lived in the suburbs of D.C., three thousand miles from L.A.

“Huh?” Kyle yawned and roled over, wishing Jason were in bed beside him. “What’re you talking about?”

“We need to talk about our camping trip,” Jason replied.

Kyle sat up against the headboard, accidentaly bumping his head. He was suddenly wide-awake. “Our camping trip?” He’d been looking forward to that trip for weeks, hoping for at least a little magic with Jason in a summer that had somehow gotten eaten up by a drudge job at Chicken Little Rotisserie, boring family obligations, and freshman orientation at Princeton.

Both Jason and he had been so crazy busy they’d barely had time for romance. (“Hey, I just got home from work. My mom and dad went out. Come over, quick!”)

The camping trip would be their last chance for quality time together before separating for colege. Was Jason now canceling?

“Hurry over here and I’l explain,” Jason told him before hanging up.

Kyle immediately speed-dialed his best friend Nelson, whose turn it was to drive them to work. “Hey, can you pick me up at Jason’s? I think he’s bailing on the camping trip.”

“But you had your heart set on that.”

“Tel me about it,” Kyle grumbled and jumped out of bed.

Jason Carrilo hung up the phone with Kyle, grabbed the basketbal from atop his dresser, and raced to the driveway, hoping a few hoops would help him figure a way out of his dilemma.

“Here’s the deal …” Jason wiped the sweat from his forehead as Kyle strode up the driveway. “I got a cal from this new high school for gay and lesbian kids in L.A. They heard about my coming out last semester.”

In the spring, when Jason had come out to his coach and basketbal team, the news had raced through school, and because of his varsity athlete status, he’d been interviewed on local TV. That story reached the Web—and the entire country.

“The school wants me to give a speech at their opening ceremony. They’l fly me to L.A., pay my hotel, and everything!”

“Jason, that’s awesome!” Kyle high-fived him, leaping into the air

“I know!” Jason agreed, relieved to hear Kyle’s enthusiasm. “Can you imagine? Seeing the Pacific Ocean? Movie stars? I’m so psyched. Except … it’s the same time as our camping trip.”

Seeing Kyle so downcast, there was no way Jason could bail on their camping trip. “I’l tel them I can’t do it.”

“But you’ve got to go!” Kyle protested. “It’s too important.”

“So is our camping trip,” Jason argued.

“We’l go the weekend before,” Kyle suggested. “I’l switch my work schedule. I’m not going to miss our camping trip.” Jason smiled, thinking how Kyle always brimmed with support and enthusiasm. “You realy think I should take them up on it?”

“Jason, they’re inviting you to California!” Kyle gazed across the driveway at Jason, his hazel eyes ful of encouragement. “I just wish I could be there to see you.”

“I wish you could too.” Jason suddenly wanted to kiss Kyle right there in front of his house beneath the basketbal hoop. And he sensed Kyle felt it too.

But as the two boys moved toward each other, a car horn blared. Jason turned, instantly recognizing the figure behind the steering wheel puling into the drive. He only knew one person nutty enough to dye his hair flaming pink—the same shade as stomach medicine.

“You like it?” Nelson Glassman beamed, loving the stares on his friends’ faces at his new pink hairdo.

“It’s different.” Kyle gazed into the car at Nelson.

Nelson glanced at himself in the rearview for the milionth time, reveling in their reactions.

Nelson popped open the passenger lock, but Kyle made no move, instead gazing at Jason. Nelson watched. Were they about to kiss?

Jason’s eyes darted toward Nelson and noticed him. Turning red, he stepped away from Kyle and began dribbling his basketbal. “Thanks for coming over,” he told Kyle. “Catch you later.”

“So tel me what happened!” Nelson asked Kyle as they puled out of the drive. “Did he bail on your camping trip?” As Kyle explained about the school in California, a wave of anger rose inside Nelson. Was he hearing right? “Whoa! Miss Teen Closet-Case
finally
comes out during his last days of senior year and for that he wins a free trip to Holywood?” The injustice of it galed him. “How unfair is that? I’ve been out since kindergarten. Where the heck’s my expenses-paid trip?” Kyle failed to respond, gazing out the windshield with a faraway look. “I’d give a milion dolars to be there with him. It’l be a huge moment in his life.” Nelson stuck a finger into his throat, pretending to gag, though it hurt to see Kyle so forlorn. Then suddenly an idea crashed into Nelson’s brain.

“Hey! Why not ask the school if …” He snapped his fingers as a plan sprang into his mind. “If instead of an air ticket they’l give Jason the cash so the three of us can drive cross-country? Can you imagine how awesome that would be?”

“Drive to California?” Kyle turned from the window. “You serious? With what car?”

“This baby!” Nelson patted the dashboard of the Ford Taurus. It had been his mom’s car til summer’s start, when she’d bought herself a new one. “Kyle, it would be a blast! You, me, and the world famous basketbal fag.”

Kyle frowned but stayed silent, as if pondering the idea. “First of al,” he finaly said. “Like your mom’s going to let you take her car cross-country? I don’t think so.”

“Secondly …” Kyle shook his head. “You know how long driving to California would take?”

“We have time.” Nelson shrugged. “You don’t start school for three weeks.”

“Hmm.” Nelson emitted a loud, meaningful sigh. “I guess being in California with Jason isn’t realy worth a milion dolars after al.” Kyle narrowed his eyes at Nelson. “Look, you realize how much hotels would cost?”

“Forget hotels! Weren’t you going to camp anyway? Camping’s cheap. We’d just need money for gas and food. Besides, I’ve saved money from my job.” Kyle shifted in his seat as they turned into the mal’s parking lot. “Nelson, it wouldn’t work.”

“Why not?” Nelson insisted. He wasn’t about to let go of the idea that easily.

“Because …” Kyle’s mouth hung open as if to say something, then he quickly shook his head. “It just wouldn’t work.”

“But why not?” Nelson persisted, puling the car into a parking space.

“Nelson, think about it.” Kyle’s voice became agitated as he flung open the door. “The three of us? Together? Camping? By week’s end you’d toss each other out of the car window.”

“We would not.” Nelson folowed Kyle across the scorching asphalt. “I’ve grown to like the old hoop-head.”

“Forget it.” Kyle flashed a scowl over his shoulder as they approached the mal. “Crazy—bad idea.” But Nelson sprinted ahead and swung open the glass door for Kyle, determined to convince him.

Kyle stepped past Nelson into the air-cooled mal, determined to resist being cajoled into the road trip.

“Oh, come on,” Nelson pleaded. “Jay-jay and I love each other now—as friends, of course. Why not ask him about the trip and let him decide?”

That was Nelson’s latest shtick. If he couldn’t get his way with someone, he accused them of being controling.

But Kyle stuck to his guns. “Yeah, right. I’m not the one being controling.”

“Yes, you are!” Nelson caled after him. “You’re about to move five hundred miles away to colege and you’re passing up this amazing last chance for quality time with me and your boyfriend.”

Kyle slowed his pace as he approached his workplace and checked his watch. He stil had a few minutes before he’d be late.

Nelson lingered beside him silently, his jaw set, ignoring the darting glances of passersby. His disappointment about the trip was obviously genuine, for Nelson rarely turned away from attention and was almost never silent.

“Listen …” Kyle struggled with how to console him without giving in. “You’re my best friend. Jason’s my boyfriend. I love you both, but differently. You guys are just too different. That’s why I know it wouldn’t work.” He reached for Nelson’s shoulder and gave it a squeeze. “Okay? Have a good day.”

“Whatever,” Nelson mumbled and shuffled away, his pink tuft disappearing in the direction of the candle shop.

Kyle headed into work and puled on his apron, resolved not to waste any more thought on Nelson’s impossible idea.

Instead he focused on Jason. Kyle felt so proud of him for getting the invitation. More than anything in the world, he wished he could be with Jason to see him give his speech. But how? Kyle couldn’t afford to blow that much money on a plane ticket. He’d already spent too much on camping stuff—a cozy tent, a sleeping bag, and a realy cool Swiss Army knife with twelve different tools.

As Kyle prepared one dreary Chicken Little platter after another, Nelson’s road trip idea began pecking and scratching at his thoughts. Maybe Kyle had been too quick to dismiss it. After al, it would give Jason and him a lot more time together. He could be with Jason not only in California, but also in places along the way: Carlsbad Caverns, the Grand Canyon … and each night sleep arm-in-arm with each other.

But what about Nelson? Would he and Jason realy be able to stand each other al that time? Would Jason and Kyle be able to have any time alone? Could the three of them get along al the way across the country and back?

Lost and Fondue by Aames, Avery
Dexter the Tough by Margaret Peterson Haddix
The Electrical Experience by Frank Moorhouse
Pulled Within by Marni Mann
Dolly and the Singing Bird by Dunnett, Dorothy
The Girl in the Wall by Alison Preston
The Hormone Factory by Saskia Goldschmidt
Tales Of Fishes (1928) by Grey, Zane
Highland Sparks (Clan Grant #5) by Keira Montclair
Arranged Love by Mittal, Parul A
Our partner