Read Raven and the Cowboy: A Loveswept Historical Romance Online

Raven and the Cowboy: A Loveswept Historical Romance 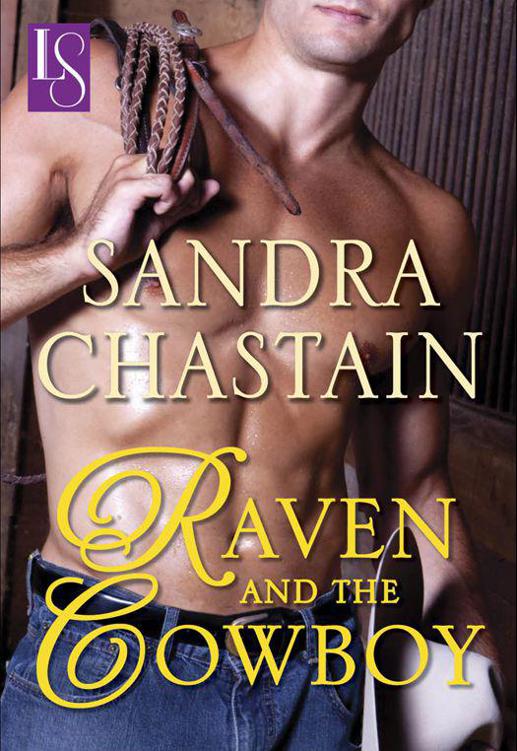 Raven and the Cowboy
is a work of fiction. Names, places, and incidents either are products of the author’s imagination or are used fictitiously.

LOVESWEPT and colophon are trademarks of Random House, Inc.

Raven and the Cowboy
was originally published in paperback by Bantam Books, an imprint of The Random House Publishing Group, a division of Random House, Inc. in 1996.

Excerpt from Ruthie Knox’s
Ride With Me

Excerpt from Bethany Campbell’s
See How They Run

The dream came again. At first there was the fluttering sound of wings. Then came the elusive shadows that fled before her as she walked. For weeks it had been the same, but now it was different. Now there was a curious fear mixed with the anticipation.

She stood at the edge of the precipice, her arms extended, the wind against her back urging her forward. The river below was a glittering reflection of blue sky, snaking its way along the boulders, through cliffs as slick and straight as ice.

Unafraid, she waited. Then the dream changed. This time she answered the urging of the wind and stepped out into the vast open space beyond. And suddenly she was falling. Yet she welcomed the sensation, the presence of unbound joy.

She could live or she could die. The choice was hers. Miraculously, she began to move her arms. The updraft caught her body and cushioned it, lifting her into the current where she soared like a bird. She glanced down at her body; it was covered with glossy black feathers. Her arms became wings. Her senses sharpened; she could feel the movement of tiny animals along the water’s edge.

She was now the raven for which she was named.

But why? What did the dream signify?

Beyond the cliff and the river, the mountains loomed like guardians over her, not friendly, yet not angry at her presence. They drew her closer, hypnotically luring her toward their lofty peaks.

Then she saw him, a man, a tawny mountain lion of a man, a cougar lying on the ledge. Majestic in sleep … or death. She couldn’t tell.

Drifting nearer, she felt drawn by the force of his inner power, a self he protected, hid from the world. A self he’d closed off for so long that only the spirits knew of its existence. He was alive.

She flew to the ledge and settled down beside him, knowing that this place, this man was her destiny.

Raven Alexander knelt by the dying man, her clasped hands resting against her knees, her head bowed. The coals of a mesquite fire burned down, breathing little warmth into the shadows. But she did not feel the cold.

From outside the tepee came the sound of low, muffled drumbeats, growing slower and slower, like the ebbing of the old man’s heart. Then came the keening of voices, high, tight with grief, blown by the wind.

Death was no stranger to Raven. Her mother had lost her life bringing Raven into the world. Her boisterous Irish father had been killed in a mining accident. Now she was losing Flying Cloud, the man she’d always called Honorable Grandfather.

Suddenly the old man opened his eyes and reached out to clasp her by the arm. “Come close, my child,” he said, gasping for breath. “I have little time.”

“Be still, Grandfather, you must rest.” She tried to ease him back to the rug on which he lay, but he continued to hold tight.

“No, you must listen. I have told you of the wealth
of our people hidden in the sacred mountains to the south. The time has come for you to go there, to claim the treasure.”

“The spirits will protect you, Raven. You must go.”

Flying Cloud let go of her arm and collapsed back to the ground.

“Grandfather? Please, I can’t leave you.”

“I have prepared you for this journey all your life, Raven. You will find two men. One comes to you,” he rasped, “in the form of the cougar.”

“Cougar?” Over and over in recent weeks, she’d dreamed of a sleek golden mountain lion.

“Go, my child. Promise me that you will do this thing.”

She had no choice but to follow the wishes of this man who’d been her rock in a changing world. “I promise, Grandfather.”

With a heavy heart, Raven stood and backed away from the man she’d loved all her life. His last words followed her from the dwelling.

In a small cantina just south of the border, Tucker Farrell watched the slim Mexican across the table blatantly deal his Spanish friend a card from the bottom of the deck. The Spaniard wore an open jacket, displaying crossed silver-trimmed leather straps filled with cartridges for the pistol at his hip. Not only was he a crooked card player, he was a bandit as well.

The dealer gave a sharp laugh as he slapped a card on the table before Tucker and moved on to the grizzled old half-breed miner who’d turned up earlier, and who, in order to get into the game, had bragged about finding a lost treasure.

Nothing new about that along the Rio Grande. Tales of lost mines and treasure were routine. Tucker studied his cards. He was holding a pair of fours. Another time, he might have stayed in, but he weighed the possible loss of his drinking money against his chances and threw in his hand. He might have won, but a sure bottle was worth more than a few hundred maybes.

The miner studied his cards, took two. When the old man raised the bid, he shuffled his cards several times, then pulled a nugget of gold from his pocket and threw it into the pot.

The two remaining cardplayers looked at each other and nodded. The onlookers grew quiet. Tucker would have moved away had he not been caught up in the tension of the play. The hand progressed. Consternation was obvious on the old Indian’s face. Now the pot held two nuggets and what looked like a heavy gold watch fob set with a ruby.

A sick feeling hit Tucker in the pit of his stomach. The prospector was heading straight for trouble, and he seemed oblivious to the danger.

“The bet, it is to you, old man,” the dealer said in heavily accented English. “What do you say?”

Tucker wondered why the miner took such a chance. If he had actually found a treasure, it had to be worth a lot more than a meager pot in a poker game.

Must be pride, Tucker decided. Hell, he could understand that. He’d felt the same way, until he’d lost his own self-respect and given up on finding it again.

“I have a name,” the old man said, a sudden burst of
excitement giving him courage. “I am called Luce, the keeper of the mountain.”

Just as quickly the bravado turned to uncertainty as he wiped perspiration from his forehead with the worn sleeve of his shirt. “I—I cannot cover the bet, not with what I have. But I give you my marker. I will return with the money, I swear.”

“We don’t take no markers,” the dealer’s sidekick said. “You’d better have money or it’s all mine.”

Tucker groaned and laid his hand on the pistol strapped on his left hip, hoping he wouldn’t have to use it. The old Indian had been showing off. No telling how he’d come by his precious loot, but he was in the stew now.

“But I have more,” the old man insisted. “I do. I will make my mark.” He reached inside his pocket.

Tucker heard the sound of a pistol being cocked.
Ah, hell
. The bastards weren’t going to let him get away. If Tucker didn’t act quickly, the bandits would have more than the old man’s IOU. Without thinking, Tucker reached for the bottle in front of him, knocking it over on the cards. The dealer turned his eyes on Tucker in disbelief.

“What the—?” the bandit swore, scrambling backward.

“Sorry.” Tucker took his bandanna from around his neck. “I’ll just wipe it up.” He lurched to his feet, slurring his words just enough to convince onlookers that he was drunk.

At the same time, he stumbled, swept the nuggets and the watch fob into his pocket, and collapsed across the table, determined that the bandits not profit from their cheating.

Then, as if he were trying to right himself, Tucker pulled the table toward himself and, shoving the miner
out the door, sagged backward, blocking the exit as he fell. “I think I’ve had too much to drink,” he said with an affected laugh.

“Get out of the way, you idiot!” The two men tried to get past him, one of them firing at the escaping prospector. But in his efforts to apologize and stand, Tucker managed to delay both men long enough for the old miner to get away.

The Virgin and Zach Coulter by Lois Faye Dyer
Exchange of Fire by P. A. DePaul
Velvet Underground&#39;s The Velvet Underground and Nico by Harvard, Joe
Lost and Gone Forever by Alex Grecian
7 Love Bites by Ellen Schreiber
The Lady Who Came in from the Cold by Grace Callaway
The Preacher's Son #1: Unbound by Jasinda Wilder
Closing Time by Joe Queenan
Devine Intervention by Martha Brockenbrough
Alicia Myles 2 - Crusader's Gold by David Leadbeater
Our partner