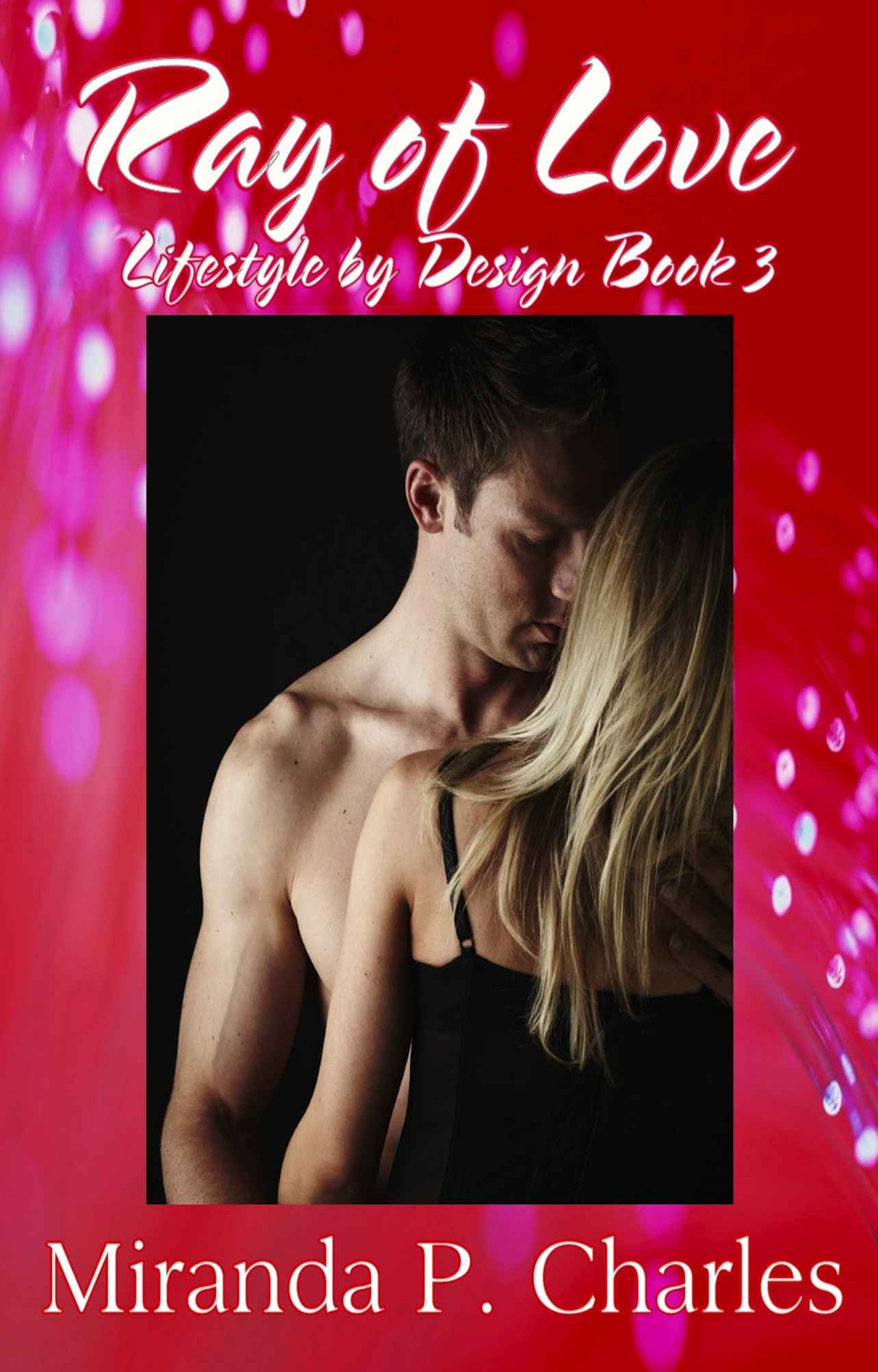 No part of this book may be reproduced, transmitted, downloaded or distributed in any form without the express permission of the author.

All of the characters, locations, organisations and events described in this novel are either products of the author's imagination, fictitious or are used fictitiously.

Any resemblance to any event, locale or person, living or dead, is purely coincidental.

Other Books by Miranda P. Charles

"You need to have a haircut soon, Ray," Faye Summers said distractedly as she continued to gaze at the man sitting next to her. The more she looked, the more she found little details she hadn't noticed before - like how his brown hair turned wavy when it was longer than its usual length, or how his deep blue eyes had specks of green in them, or how the right side of his mouth quirked into a cheeky, lopsided smile when he was being teased.

"Yeah, I know. I just haven't had the time to get it done," Ray Thackery agreed, running his sexy fingers through his longish hair. "Is it that bad already?"

"Bad? No, it's not bad, just a little long. You still look hot but you look hotter when you wear it shorter."

"Sure," she responded nonchalantly. "You must know you are. Even Clarise and Jessa think so."

"Oh. And here I was thinking you were flirting with me," Ray commented dryly.

She laughed and hurriedly changed the subject. "Hey, since those two are both engaged now, how do you feel about them taking some time off for their weddings and honeymoons in a few months' time?"

"I hope they're not planning on being away from work at the same time," Ray replied absently before jumping back to their original topic. "So how short should I have my hair cut?"

"Hmm, about a couple of inches shorter, I think, and wear it spiky and a little bit messy like you do sometimes."

He raised an eyebrow and smiled charmingly. "You think it'll be easier for me to pick up women with that 'do?"

"Well, it would be nice if
you
picked me up," he drawled.

"Why don't you have that haircut and I'll consider it." She was surprised at the husky statement that came out of her mouth but it was too late to take it back.

Faye didn't know why she was letting herself have this conversation with Ray. Sometimes her mouth did get her into trouble. She was someone who didn't have problems telling people what she thought or felt. And, oh yes, she was a bit of a flirt.

Ease up, Faye. He might take you seriously,
she cautioned herself.

Her three closest buddies, Clarise Carson, Jessa Allen and Victor Michaels, all worked at Lifestyle by Design Publishing. Based in Sydney, it published one of the most popular magazines in Australia for the entrepreneurial and professional set. Clarise and Jessa were its senior writers and editors, while Victor was its head graphic designer.

And Ray Thackery was its owner.

So why in the hell was she
flirting
with her pals' boss right now?

Maybe it was the few glasses of wine she'd had. She wasn't a big drinker but they were celebrating Jessa's twenty-ninth birthday and her surprise engagement to Rob Granger.

Or maybe it was because Ray was one of the most attractive men she knew that she just couldn't help herself.

"Hey, guys," Jessa called as she stepped out onto her courtyard that was decked out with portable outdoor heaters. While it was early spring in Sydney, the nighttime temperatures were still cool and the heaters offered welcome warmth for those who lounged outside.

Jessa held out bags to them. "Here are some leftovers for you. Everyone gets to take home some food; otherwise it'll go to waste."

"Is this your way of telling us it's time to go, Jess?" Faye teased.

"Yes," Rob called from inside the house. "My new fiancée just can't wait to properly thank me for giving her a surprise birthday party and putting a ring on her finger."

Jessa rolled her eyes and blushed.

"We can take a hint," Ray grinned as he stood up and got ready to go. "You sure know how to throw a party, Rob."

"Well," Rob said as he leaned on the door frame, "I wanted to make it as hard as I could for Jess to say no when I proposed."

"As if I'd say no," Jessa replied as she walked over to Rob and put her arms around his waist. Rob hugged her to him with a tender smile on his face and kissed her hair.

"Okay, guys," Faye called out to Clarise, Victor and their partners. "It's time for all of us to go and give these two lovebirds their private time."

As Ray headed for his car, he turned to Faye. "See you after I get my haircut, Faye," he said with a wink.

Faye couldn't help but smile at his playful demeanour. She suddenly became conscious of the fact that it had been a long time since she and Ray were this comfortable with each other. It was good to joke around with him again. She missed that.

"So what did Ray mean he'd see you after he gets a haircut?" Clarise asked as she glanced at Faye seated in the back of the car while her fiancé, Will Matthews, smoothly navigated the streets to Faye's apartment.

"Oh, we were just joking around. I kind of said I'll consider picking him up after he gets one," Faye answered dismissively.

"Not that kind of pick up," she clarified to her confused friend. "We were just flirting around."

"Right. So what does all that flirting mean?"

"Nothing. Like I said, we were just joking around. You know what I think about going out with your boss, Clarise."

"Not interested, Faye?" Will asked, peeking at her through the rear-view mirror.

"If he wasn't my best friends' boss, maybe," she answered with usual frankness. "But he is and I don't want any drama with my closest relationships."

Clarise raised her eyebrows in surprise. "You never said anything about being interested in Ray. When he asked you out sometime last year, you didn't even hesitate to say no."

"I know. I had just met Steve then, remember? Besides, even before he asked me, I'd already considered the complications of having a relationship with him and decided it wasn't worth it. Imagine the drama if I cried to you about my personal issues with him, or if he needed me to listen about work problems involving you guys. It would be very awkward, to say the least."

"But if you're really attracted to him …"

"I'm not
that
attracted."

"Okay. You do know Ray might get the wrong impression? We think he might still have a little crush on you," Clarise admitted.

"Really? What makes you think so?"

"Remember about two months ago when you went speed dating? He asked me and Jess where we were going and we said we were escorting you to this speed dating thing. There was just something about his reaction when he discovered you'd broken up with Steve and that you were available again."

"You guys didn't tell me about that," Faye said, her brows furrowing.

"No, we didn't. We knew you weren't looking for anything serious and we didn't want Ray to hope for anything, so …" Clarise shrugged her shoulders.

Faye nodded. It was clear as day that her friends were also protecting Ray's feelings and she could understand that.

Before she met Steve, her last boyfriend, Ray was their frequent lunch buddy. It surprised her that he joined them as often as he did, seeing he was her friends' boss. She eventually learnt that he did make it a point to socialise with his staff to get to know them better. But it also appeared that he had lunch with the four of them far more often than he did with his other employees. It was when he asked her out that she guessed the reason why.

She enjoyed Ray's company and at one point even toyed with the idea of going out with him. But she was also witness to the great relationship her best friends had with him as their boss. Dating Ray could upset that. That was exactly why she decided not to get involved with him.

"I'll be more mindful next time I'm around him," she promised Clarise.

They stopped at a red light and Will reached out for Clarise's hand and lifted it to his lips before setting it down on his thigh. Clarise smiled at him and left her hand where he placed it, stroking him innocently.

Faye sighed silently. It was very sweet and she was happy that Clarise had found the man she was going to spend the rest of her life with. They were so in love. She wanted that, too.

She gave herself a mental shake. It was the impatience in finding 'the one' that got her diving into new relationships before she was truly ready to move on.

No rush. There's nothing wrong with enjoying being single for a while, even at twenty-nine.

After breaking up with Steve four months ago, she'd decided to just date around and not plunge into anything that would mean commitment. Her last three relationships moved into serious territory pretty quickly, and none of them lasted more than a year. She figured part of the problem might be that she was too quick to fall in love with the next guy without fully getting over her issues with the previous one. So this time around, she promised to give herself plenty of time to heal whatever conscious and unconscious wounds she had. For a few months - maybe another six or so - she'd focus on simply having fun while dating and leave it at that. Fun.

With her straight, silky blonde hair, long-lashed blue eyes, flawless skin and slim body with gorgeous curves, Faye was considered stunning by most people. There was no shortage of interested men who would give their right arm to date her.

She just needed to be extra selective so she didn't end up going out with someone who'd be in a hurry for a relationship before she was ready.

Ray discreetly checked out Victor Michaels' office as he walked past it. He spied Victor there with his eyes glued to his computer. Good. That was Victor accounted for. As for Clarise and Jessa, they were out on assignments. Clarise was meeting with the owner of Sydney's fastest growing beauty spa chain and Jessa was sampling the culinary delights of one of the city's newest Japanese restaurants.

When he found out two months ago that she had broken up with her boyfriend, he had convinced himself not to go down the path of asking her out again. But after spending that time with her at Jessa's birthday party, all that swirled in his head was the question 'why not?'

Unmanned by Lois Greiman
The Fractured Sky by Reid, Thomas M.
Master of Love by Catherine LaRoche
Rock Harbor Series - 01 - Without a Trace by Colleen Coble
Maine by Sullivan, J. Courtney
A Love for All Seasons by Bettye Griffin
Snapshot by Linda Barnes
Rosehaven by Catherine Coulter
The Accident by C. L. Taylor
Time Traders II: The Defiant Agents Key Out of Time by Andre Norton
Our partner