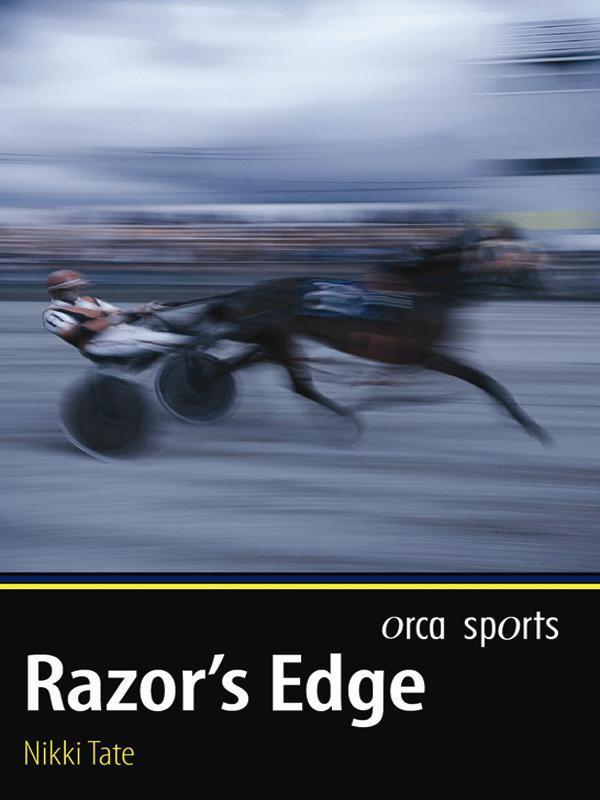 Summary:
Travis and his friends train and race horses at a harness-racing track. When someone starts hacking off the horses' tails, Travis must solve the mystery before he loses everything he has worked for.

For Bill and Marian Young

I step into the stall and run my hand along Romeo's back and over his rump. The handsome gray gelding looks back over his shoulder. I reach for his tail. Or rather, the place where his magnificent cream-colored tail used to be. Someone has cut the whole thing off.

My buddy Ryan's hulking form fills the stall doorway. “Travis, why are you yelling? We can't afford another vetâ” He stops mid-sentence and steps into the stall beside me. “What theâ?”

“That's what I said! Who would do something like this?”

“I already looked,” I say. “There's not a single hair left.”

Ryan shakes his big head from side to side. “It doesn't make any sense. Why would someone steal a horse's tail?”

Stupidly, we both look around the stall again.

“It's gone, man. Like really gone.” Ryan jerks his head toward the open stall door. “What about the others?”

“I just got here. I came in to get Romeo's feed tub andâ” We both stare at the horse's scraggly stump of a tail.

Ryan moves toward the door. I'm right behind him. I grab a manure rake from where it leans against the wall in the barn aisle.

“Hey, Finnegan,” Ryan says, unlatching the next stall door in the long row. “Show me your backside, buddy.”

Still clutching the rake handle, I follow Ryan inside.

“I guess whoever did it doesn't like black tails,” he says.

Finnegan swings his rear in my direction. His black tail swooshes behind him. It's long and full, reaching well past his hocks.

“What about Dusty Rose?”

Ryan is about to push past me again when he spots the manure rake in my hands. I'm holding it in front of me, trying to look dangerous.

“What are you doing? The mucking can waitâ¦”

Ryan's eyebrows push together. Then he laughs. “Good to know you've got my back!”

We check on our other two horses. Dusty Rose and Dig in to Win are both fine.

“What was so special about Romeo's tail?” I say when we're back out in the aisle.

Ryan shrugs. “He's the only gray horse in this barn. And his tail was long and thick.”

True enough. When Romeo is flying along at full speed, he carries his tail high enough that it whips around my hands when I'm driving. We had actually talked about wrapping it so it didn't get caught up in the sulky during a race. The lightweight racing carts the horses pull are dangerous enough without extra interference from an out-of-control tail.

“Does Jasper know yet?” I ask.

“I'll go find him,” I offer. “I need another coffee. Do you want anything?”

Sure enough, Jasper's at The Bog, the coffee place the horsemen use at Blackdown Park Racetrack. It's not nearly as fancy as the restaurants and casino over in the grandstand. The coffee tastes like swamp water, but the cafÃ© is handy and at this hour of the morning, anything hot and caffeinated goes down well.

The youngest partner in our harness-racing business is impossible to miss. He's six foot five and stick skinny. As usual, Jasper's wearing a saggy black T-shirt. Before he even turns around I know the kind of thing that will be on the front. Jasper's tastes run toward skulls, spiders and blood-dipped daggers.

When the three of us stand together, it's like someone took the average of the other two to get me. I'm not as tall as Jasper or as big around as Ryan. My hair is lighter than Jasper's thick dark mop and not as wild as Ryan's blond curls.

The reserve where Jasper lives is right next to the track, so you'd think he'd get to the track first every morning. Wrong.

“Hey, Travis.” When Jasper turns away from the counter, I am eye-to-eye with three bubble-headed aliens staring back at me from his chest. As usual, he looks like he crawled out from under a rock.

“You're not going to believe what happened to Romeo.”

“Someone stole his tail.”

“April Fools' Day?” He's right. Today is April first. “Jasper, this is no joke. His tail is totally gone!” I doubt he'll believe me until he sees for himself.

Jasper fights hard to pull himself together. “That's crazy!”

“Yeah, it is crazy. But that's what happened.” I tell Jasper the whole story, and by the time I'm done he isn't laughing anymore.

“What kind of sicko would chop off a horse's tail?” he asks.

All I can do is shrug.

“We need to win a race so you can buy new boots,” Ryan says, poking the butt end of a driving whip into a hole in the heel of my rubber boot.

“We need to win a race so we don't have to sell a horse,” Jasper says. He runs his finger down the page in his notebook.

Jasper may be the baby in our group, but he's the one who's actually organized enough to keep track of what we're spending and how much we're bringing in. That makes it sound like our harness-racing business actually makes money. Most months we're lucky to cover our bills. Even so, we try to run our racing stable right. The business planâand we do have oneâis to start making a profit by the end of this year. To do that we need to keep our costs down, look after our horses ourselves and finish in the top five in any races we enter. The purse money is always split among the top five horses. Of course, winning pays the most, but even with decent horses it isn't as easy as it sounds.

So far, other horse owners haven't been too impressed with our efforts. We don't have any horses owned by clients, unless you count Finnegan. Ryan's uncle bought him for us when we were getting started a year ago and, technically, he still owns him. We haven't earned enough yet to pay him back.

We don't mind all the work we have to do, but none of us is crazy about meetings. We'd rather be doing stuff with the horses. But Jasper insists that we meet every Monday to figure out who's doing what during the coming week. Our tack room in A-barn is really too small for our meetings, but we have them here anyway.

Recently, the meetings have been pretty depressing.

Ryan tips his chair back and leans his head against the wall. He closes his eyes and sighs. The chair creaks a little under his weight.

“I'm getting paid Friday,” he says. Ryan has a part-time job at the gas station.

Jasper looks at me and raises an eyebrow.

I work Thursday evenings at the Chick-a-Biddy Tack and Feed Emporium. The good news is that I get a discount on horse feed. The bad news isâwell, there's lots of bad news. First, they don't pay well. Second, the tack part of the store doesn't carry much that's useful to us. Because we're harness racers, we don't ride our horses, we drive them. Which brings me to the third thing about my job that makes me crazy: the people who come in and spend tons of money are all these middle-aged women who love dressage and treat their horses like kittens. They wear top hats and coattails at horse shows where they ride their fancy horses in perfect circles. Where's the thrill in that? I can understand how the show jumpers or eventers get excited about what they do. Leaping over big fences is almost as dangerous as driving a horse in a harness race. Not that any of us want to see anyoneâhorse or humanâget hurt. But seriously, how hard can it be to sit there and look pretty?

The only good thing about those dressage women is that some of them have daughters my age who are kind of cute. Sometimes they come in wearing their tight riding pants and high boots. That part of my job is great, especially when the girls bend over to go through the bargain tubs at the back of the store.

“I asked how much you can put in next week.”

“Maybe enough to get Dusty's feet trimmed and those shoes re-set.”

Jasper nods and makes a note. “I'll call and make an appointment with Dan.”

Dan is our farrier, the guy who keeps our horses' feet in good shape. He's also one of Jasper's eight hundred cousins. Okay, he doesn't really have eight hundred cousins, it just seems that way. However many cousins he has, at least half of them work at the track. Some of the older guys don't like to hire guys from the reserve. I don't get that. Dan is a good farrier. He's patient with the horses and never complains when we call him to replace a thrown shoe or if he has to wait to get paid.

My dad says that you can tell a lot about a man by how he deals with a horse. It drives my mom crazy when he says stuff like that. “What about women?” she wants to know.

Jasper finishes punching numbers into his calculator, writes something in his notebook and flicks his pen across the card table. “You might not have to chip in anything if we can get a couple of decent finishes on the weekend,” he says to me.

Ryan laughs and his chair
thunks
forward. “We can hope!”

“That would be a good name for a horse,” Jasper says.

“That's what we should have called our stableâ¦,” I mutter.

“Get over it, would you?” Ryan pokes me with the whip. “If we can't feed our horses, we won't need any kind of name for our stable.”

Ryan, Jasper and I call our business Three Musketeers Racing Stable. It's not the most original name, but we were desperate. It doesn't seem like it would be that hard to come up with a name, but man, we were ready to kill each other. Jasper wanted something like the Fanged Avengers Racing Team. That might have been okay except that when you see the initials by themselvesâFARTâthe name wasn't going to strike fear into the hearts of other trainers. Then Ryan said we should combine our names somehow. Ryvisper, Jatran and Trysper were some of the names we came up with. Since we couldn't remember how to spell them from one day to the next we didn't think any of those would work either.

My dad inherited both his own name and the name his horses race underâ Geoff Russell Racingâfrom my grandfather, Geoff Russell Sr. Dad's been in the business forever, but the best suggestion
he came up with for us was Fat Chance Racing Stables. Jasper said my dad was just worried we were going to amaze everyone with our stunning horses. That hasn't exactly happened.

Night of the Grizzlies by Jack Olsen
Bear With Me by Moxie North
Dead Is Just a Rumor by Marlene Perez
NYPD Puzzle by Parnell Hall
My Asian Lover (Interracial BWAM Romance Book 1) by J A Fielding, Bwwm Romance Dot Com
Turned (Book 1 in the Vampire Journals) by Morgan Rice by Morgan Rice
'Til Death - Part 2 by Bella Jewel
Who We Were by Christy Sloat
Fargoer by Hannila, Petteri
Chasing Aubrey by Tate, Sennah
Our partner