Red-Dirt Marijuana: And Other Tastes 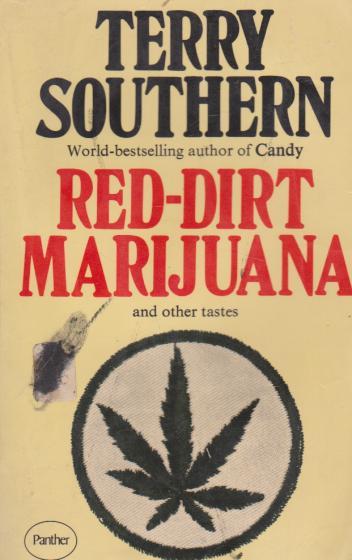 The Sun and the Still-horn Stars

The Night the Bird Blew for Doctor Warner

You Gotta Leave Your Mark

The Road Out of Axotle

Love Is a Many Splendored

Recruiting for the Big Parade

I Am Mike Hammer

A Change of Style

The Face of the Arena

Red Giant on Our Doorstep!

Scandale at The Dumpling Shop

The Blood of a Wig

A Biography of Terry Southern

T
HE WHITE BOY
came into the open-end, dirt-floor shed where the Negro was sitting on the ground against the wall reading a Western Story magazine.

In one hand the boy was carrying a pillowcase that was bunched out at the bottom, about a third filled with something, and when the Negro looked up it appeared from his smile that he knew well enough what it was.

The white boy’s name was Harold; the Negro pronounced it
Hal’.

The white boy walked on over to one side of the shed where the kindling was stacked and pulled down an old sheet of newspaper which he shook out to full size and spread in front of the Negro. He dumped the gray-grass contents of the pillowcase onto the paper, and then straightened up to stand with his hands on his hips, frowning down at it. He was twelve years old.

The Negro was looking at it, too; but he was laughing. He was about thirty-five, and he laughed sometimes in a soft, almost soundless way, shaking his head as though this surely was the final irony, while his face, against very white teeth, gleamed with the darks of richest pipebriar. His name was C.K.

He reached out a hand and rolled a dry pinch of it between his thumb and forefinger.

“You reckon it’s dried out enough?” the boy asked, nasal, sounding almost querulous, as he squatted down opposite. “Shoot, I don’t wantta leave it
out
there no more—not hangin’ on that dang sycamore anyway—it’s beginnin’ to
look
too funny.” He glanced out the end of the shed toward the big white farmhouse that was about thirty yards away. “Heck, Dad’s been shootin’
dove
down in there all week—I was down there this mornin’ and that damned old dog of Les Newgate’s was runnin’ round with a piece of it in his
mouth!
I had to git it away from ’im ’fore they
seen
it.”

The Negro took another pinch of it and briskly crushed it between his flat palms, then held them up, cupped, smelling it.

“They wouldn’t of knowed what it was noway,” he said.

“You crazy?” said Harold, frowning. “You think my Dad don’t know
Mex’can loco-weed
when he sees it?”

“Don’t look much
like
no loco-weed
now
though, do it?” said the Negro flatly, raising expressionless eyes to the boy.

“
He’s
seen it dried out, too, I bet,” said the boy, loyally, sullen, but looking away.

“You
crazy?
” demanded Harold, frowning terribly; he took the Negro’s wrist. “Lemme smell it,” he said.

He drew back after a second.

“I can’t smell nothin’ but your dang sweat,” he said.

“ ’Course not,” said C.K., frowning in his turn, and brushing his hands, “you got to git it jest when the
flower
break—that’s the
boo-
kay of the plant, you see, that’s what we call
that.
”

“Do it again,” said Harold.

“I ain’t goin’
do
it again,” said C.K., peevish, closing his eyes for a moment, “. . . it’s jest a waste on you—I do it again, you jest say you smell my
sweat.
You ain’t got the nose for it noway—you got to know you business ’fore you start foolin’ round with
this
plant.”

The Negro sighed, elaborately, and selected another small bud from the pile.

“Awright now when I rub it in my
hand
,” he said sternly, “you let out you breath—then I
cup
my hand, you put your nose in an’ smell strong . . . you got to suck in
strong
thru you nose!”

“That’s the boo-kay of the plant—they ain’t no smell like it.”

“Well, now that’s why they
calls
it that, you see—but it smell like somethin’
else
too.”

“That ole
Mex
,” said C.K., brushing his hands and laughing, “he sho’ were funny, weren’t he? . . . thought he could pick
cotton
. . . told
me
he used to
pick-a-bale-a-day!
I had to laugh when he say that . . . oh, sho’, you didn’t talk to that Mex’can like I did—he call it
lotta
things. He call it
‘baby,’
too! Hee-hee. Yeah, he say: ‘Man, don’t forgit the
baby
now!’ He mean bring a few
sticks
of it out to the field, you see, that’s what he mean by that. He call it
‘charge,’
too. Sho’. Them’s
slang
names. Them names git started people don’t want the police nobody like that to know they business, you see what I mean? Sho’, they make
up
them names, go on an’ talk about they business nobody know what they
sayin’,
you see what I mean.”

He stretched his legs out comfortably and crossed his hands over the magazine that was still in his lap.

“Yes indeed,” he said after a minute, staring at the pile on the newspaper, and shaking his head, “I tell you right now, boy—that sho’ is a lotta gage.”

About two weeks earlier, on a day when C.K. wasn’t helping Harold’s father, they had gone fishing together, Harold and C.K., and on the way back to the house that afternoon, Harold had stopped and stood looking into an adjacent field, a section of barren pasture-land where the cows almost never went, but where there was a cow at that moment, alone, lying on its stomach, with its head stretched out on the ground in front of it.

“What’s wrong
with
that dang
cow?
” he demanded, not really of C.K., but himself, or perhaps of God—though in a sense it
was
C.K. who was responsible for the stock, it being his job at least to take them out to pasture and back each day.

“She
do
seem to be takin’ it
easy,
don’t she?” said C.K., and they went through the fence and started towards her.
“Look
like ole Maybelle,” he said, squinting his eyes at the distance.

“I ain’t never seen a cow act like
that
before,” said Harold crossly, “. . . layin’ there with her head on the ground like a damned old hound-dog.”

The cow didn’t move when they reached it, just stared up at them; she was chewing her cud, in a rhythmic and contented manner.

“
Look
at that dang cow,” Harold muttered, ever impatient with enigma, “. . . it
is
old Maybelle, ain’t it?” He felt of her nose and then began kicking her gently on the flank. “Git up, dang it.”

Then C.K. found it, a bush of it, about twenty feet away, growing in the midst of a patch of dwarf-cactus, and he was bent over it, examining it with great care.

“This here is a
full-growed
plant,” he said, touching it in several places, gently bending it back, almost caressingly. Finally he stood up again, hands on his hips, looking back at the prostrate cow.

“Must be mighty fine gage,” he said.

“Well, I ain’t never seen loco-weed make a cow act like
that
,” said Harold, as if that were the important aspect of the incident, and he began absently kicking at the plant.

“Shoot,” he said then, “I reckon we oughtta pull it up and burn it.”

They pulled it up.

“Must be pretty dang
strong
awright,” Harold dryly agreed, looking back at the disabled cow, “you think we oughtta git Doc Parks?”

They walked over to the cow.

The cow had raised her head, and her eyes followed them when they were near. They stared down at her for a minute or two, and she looked at them, interestedly, still chewing.

“Ole Maybelle havin’ a
fine
time,” said C.K., leaning over to stroke her muzzle. “Hee-hee. She
high
, that’s what she is!” He straightened up again. “I tell you right now, boy,” he said to Harold, “you lookin’ at a
ver’
contented cow there!”

“You reckon it’ll ruin her milk?”

“Shoot, that make her milk all the more
rich!
Yeah, she goin’ give some Grade-A milk indeed after
that
kinda relaxation. Ain’t that right, Maybelle?”

They started back to the fence, Harold dragging the bush along and swinging it back and forth.

He had twisted off a branch of the plant and plucked a little bunch of leaves from it which he was chewing now, like mint.

C.K. plucked another small bunch and proffered it to the boy.

“Naw, it jest makes me sick,” said Harold, thrusting his free hand in his pocket and making a face; so, after a minute, C.K. put that piece in his mouth too.

“We could dry it out and
smoke
it,” said Harold.

C.K. looked at him, plaintive exasperation dark in his face.

“Now Hal’ don’t go talkin’ without you knows what you talkin’
about
.”

“We could sell it to them Mex’can sharecroppers over at Farney,” said Harold.

“Hal’, what is you
talkin’
about—them people ain’t got no money.”

They went through the fence again, silent for a while.

“Well, don’t
you
wantta dry it out?” Harold asked, bewildered, boy of twelve, aching for action and projects—
any
project that would bring them together.

“Boy, you don’t catch me givin’ no advice on that kinda business—you daddy run me right off this place somethin’ like that ever happen.”

Harold was breaking it up.

“We’d have to put it some place where the dang stock wouldn’t git at it,” he said.

So they spread the pieces of it up in the outside branches of a great sycamore, where the Texas sun would blaze against them, and then they started back on up to the house.

“Listen, Hal’,” said C.K. about halfway on. “I tell you right now you don’t wanta say nothin’
’bout
this to nobody up at the house.”

The Shimmer by David Morrell
The Hourglass by Donaldson, Casey
We Are the Children of the Stars by Otto O. Binder
Geek Groom (Forever Geek Trilogy #2) by Victoria Barbour
Languages In the World by Julie Tetel Andresen, Phillip M. Carter
The Cryo Killer by Jason Werbeloff
Fated by S.H. Kolee
The Broken Sun by Darrell Pitt
Nacida bajo el signo del Toro by Florencia Bonelli
Every Breath She Takes by Norah Wilson
Our partner