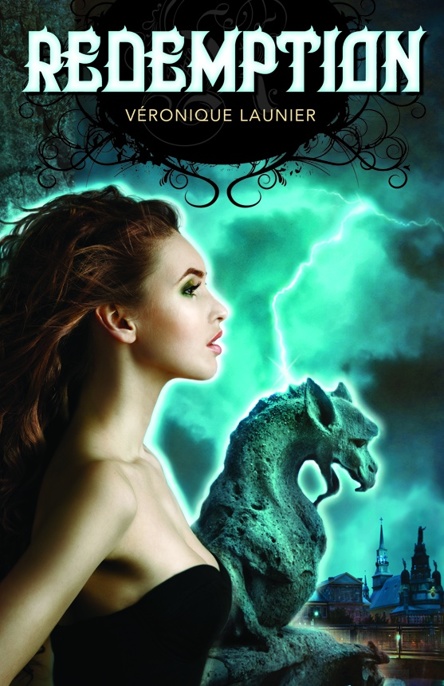 All rights reserved. No part of this book may be used or reproduced in any matter whatsoever, including Internet usage, without written permission from Flux, except in the form of brief quotations embodied in critical articles and reviews.

As the purchaser of this ebook, you are granted the non-exclusive, non-transferable right to access and read the text of this ebook on screen. The text may not be otherwise reproduced, transmitted, downloaded, or recorded on any other storage device in any form or by any means.

Any unauthorized usage of the text without express written permission of the publisher is a violation of the author’s copyright and is illegal and punishable by law.

This is a work of fiction. Names, characters, places, and incidents are either the product of the author’s imagination or are used fictitiously, and any resemblance to actual persons living or dead, business establishments, events, or locales is entirely coincidental. Cover models used for illustrative purposes only and may not endorse or represent the book’s subject.

Flux is an imprint of Llewellyn Worldwide Ltd.

Flux does not participate in, endorse, or have any authority or responsibility concerning private business arrangements between our authors and the public.

Any Internet references contained in this work are current at publication time, but the publisher cannot guarantee that a specific reference will continue or be maintained. Please refer to the publisher’s website for links to current author websites.

Humanity wandered by, the way it always had. Tourists, intent on taking in Montreal’s architecture, sometimes gawked at us and took pictures, but no one else really noticed us. From my vantage point, they all were little more than ants, scurrying about their meaningless lives amongst the hustle and bustle of the city. Ants I grew bored of watching.

They used to interest me, those humans below. I’d not always been apathetic to them. The snippets of conversations I caught as they passed used to pique my curiosity. I wondered about their lives. I even enjoyed piecing together the historical events shaping the landscape below us.

But when decades passed and all I could do was watch, I cared less and less. The little ants all grew old and died, and were replaced with more ants. A boring, never-ending circle.

This world was a dull place when you didn’t have a stake in it.

Below, footsteps echoed on the cement. A girl in a dark coat took the stairs up toward the old stone church, toward our home. She paused and looked back, and as she did, the streetlight illuminated the copper tones of her hair. I ached to crane my neck to see what she was looking at since it wasn’t immediately evident. A late night visit to our church, which was no longer a church, wasn’t a common occurrence; still some were curious enough about the museum’s plans for the old once-majestic stone church. But, these visits were not so rare as to elicit much of my interest.

Most people didn’t even notice our home. Not since 1926 when construction on the castlelike apartment building next door was completed. So, who could blame me for perking up a slight bit when I could finally see what she had been looking at?

Three men, sturdy as stone, approached her slowly from the other side of the street. There was something abnormal about their essence. Something unfamiliar to me and I thought I’d seen it all by now.

“
I haven’t felt essence like this in centuries.”
Garnier’s voice intruded my thoughts. It unbalanced me momentarily. My companions and I hadn’t bothered to communicate in at least twenty years. There was just nothing to say anymore. Nothing I wanted to say.

My other two companions, the rest of my
family
, faced the opposite direction and as such, had no line of sight to the drama unfolding at the front of the church.

Danger surrounded the attackers. It crawled on them with small lightning bolts that electrified the air. It surrounded them and was manifested by them, but it wasn’t part of them.

A long time ago, I may have wished I could do something to stop the imminent violence; I may have tried, in vain, to scream out for someone to help her. An even longer time ago, I would have put a stop to it myself. Now, I only wondered if they were going to kill her or rape her and then wondered if it made a difference.

If they killed her, it would cause more of a commotion. There were chances we could listen to more interesting conversations, but who was I kidding? The girl’s murder investigation wouldn’t be worth much note. It wouldn’t evoke any compassion or pity from me. It couldn’t draw emotions from stone.

And I didn’t plan to feel again. One doesn’t plan for the impossible. I’d been empty for so long, a shell of myself left behind to do nothing but observe.

No, there was more chance that whatever acts the men below had planned for the poor girl would serve better to awaken my curiosity. Not because I craved violence or obscenities, not in the least, but because it would be different. Different was the only thing I craved.

She tugged at the doors. Of course, the doors wouldn’t budge. Churches may sometimes be open late, but this wasn’t a church anymore. Bought out by the museum across the street a few years back, it now stood lonely and vacant, waiting for its next purpose.

She peered back over her shoulder, and I realized, then, that I couldn’t feel her essence. Somehow she kept it hidden within her.

They had closed much of the distance between them and her. Still, they didn’t hurry. I focused on their faces, expecting to witness some form of emotion. But there was none. Blank faces, blank eyes. They were human, I could tell, but different. Maybe it was just the weird way essence flowed around them. Could they be essentialists? Did they control essence? I struggled against my stone restraints. I wanted to lean in and better watch the scene before me. I needed to get down and join the action. And though the others hadn’t said another word, I knew they were also following intently; Garnier, like me, the other two, by tracking the attacker’s essence.

The girl bolted back toward the street but they cornered her before she had the chance to escape. Though they still gave the impression of calm, their gaits picked up as they approached her. They backed her around the side of the church where Vincent would now be able to get a view. Away from Garnier’s sight. The small yard was only a few feet wide and littered with dead leaves and urban trash. The streetlights did a poor job illuminating the scene and the weak light strained even my superior eyes.

The girl tripped and fell. I held my breath.

One of the men laughed and the rest joined in like a pack of demented hyenas. They were close to her. Close enough that the smell should be overwhelming her. She was surrounded.

They stood over her and I wished I could see them better. I needed to witness the scene below me, but it was too hard to make out with the night shadows dancing in harsh strokes around them. My mind absorbed every detail, so I could pore over this scenario again and again when I was back to my boredom.

She trembled and attempted to push herself away from the ground. Her seemingly frail arms were in fact rather muscular and it appeared she would manage to get up. I felt a small perverse pleasure when she wasn’t fast enough, and a well-placed boot to the upper back knocked her down again. I could imagine the smell of decayed leaves invading her nostrils. The taste of grass and dirt in her mouth. She struggled against him but made no headway.

Suddenly, I heard a distant sound like drumming. My heart hammered to its tribal beat. She chanted. Under her breath at first, and then louder and louder. It seemed like gibberish, but then I recognized the language. It was the language I learned with
her—with Marguerite
. The Mohawk language, Kanien’kéha. At the thought of Marguerite, I momentarily forgot everything else and the stone around my heart threatened to crackle, but it wouldn’t. It never did.

The drumming became louder and louder. My chest, still pounding along with it, seemed as if it would rip open.

“Who is doing that? Can any of you see anyone playing drums?”
Antoine sounded in my head.

“The sound is familiar … ”
When Vincent spoke again it hit me that he sounded so young. Like a child. Were we about to start over?

I thought of my three companions each watching from their corner. Each stuck in this state because of me, and for the first time, I felt just the tingling of a desire that maybe we could start over someday. I thought of the lives we had already lived. Vincent’s family. Garnier’s pilgrimage and Antoine … well, Antoine just looked out for us. His life has always been for us.

The ground shook, and brought me back to the present. The girl’s attackers looked between each other. I felt something. A small thread at first, but I recognized the clear feeling immediately. It wasn’t enough yet, but it looked like I would get my wish. I was no longer cheering for the attackers. The girl had to live; she was involved somehow.

“Our essence is … returning.”
I could hear the awe in Antoine’s voice.

A deep rumble began at the ground where she stood and crawled up the church’s old stones right up to our tower until it consumed me. Some of the stones on the church came loose and fell around her feet. I let out a breath of relief when she remained unscathed.

Rock crumbled, and we crumbled—or at least our gargoyle forms did. The barrier that had kept us this way for the past seventy years disintegrated. The sweet tingling of our life energy, our essence, flooded back to us—no longer just a thread, this was a river. It felt clearer, fresher than I remembered. Like a rush of clarity.

Power discharged through the air all around us, crackling like an electrical storm. I couldn’t remember ever having seen essence this wild. From a distance, it looked like lightning, but up close, it was obvious there was something more.

The miscreants that started this weren’t going to stick around to find out what it was. Their own essence bounced off of them and joined the spectacle manifesting itself over the girl. Somewhere between the rumbling ground, falling stones, and freak lightning, they lost their nerve and ran off in different directions.