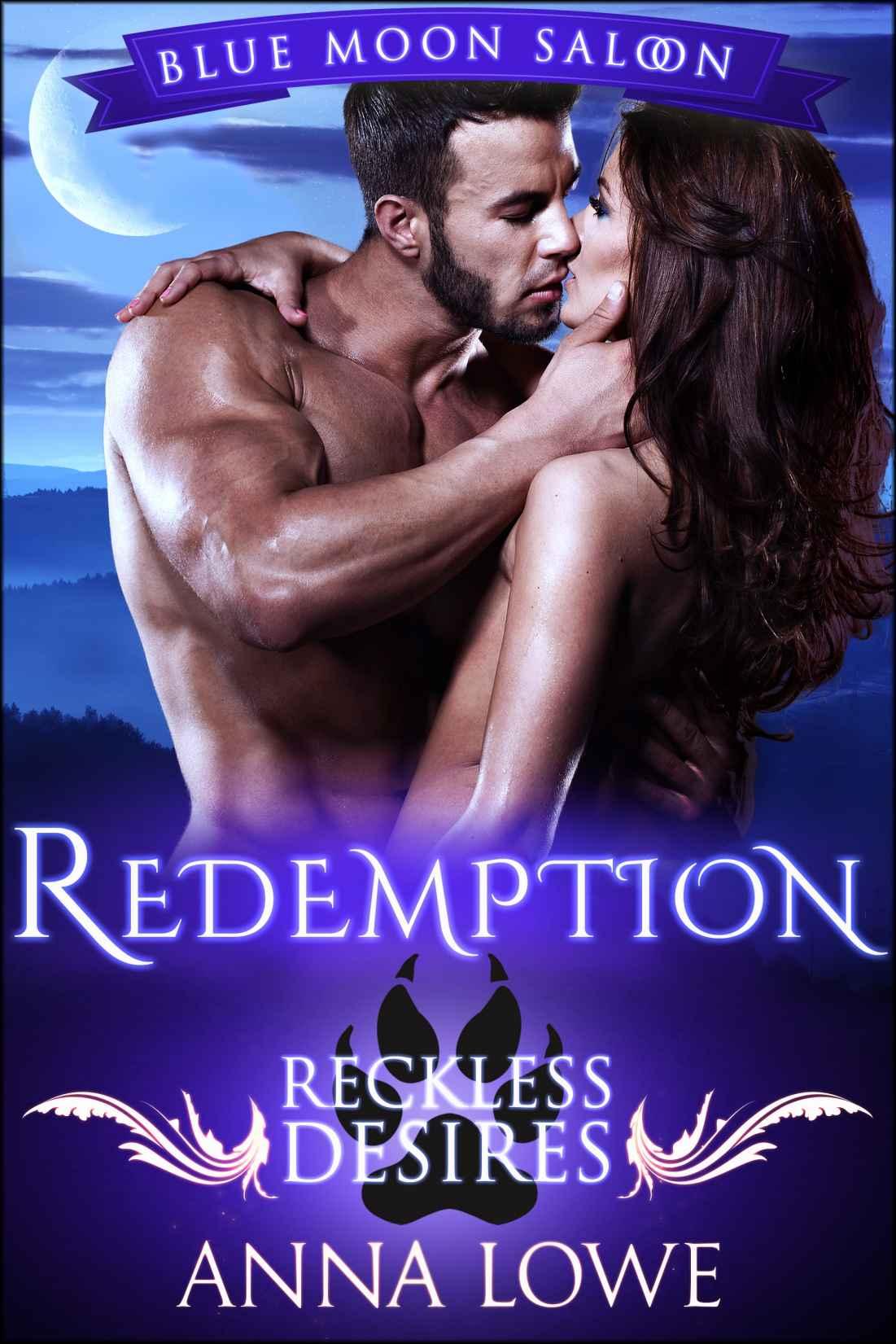 Editing by Lisa A. Hollett

This book or any portion thereof may not be reproduced or used in any manner without the express written permission of the author except for the use of brief quotations in articles or reviews.

This is a work of fiction. Any resemblance to actual persons is purely coincidental.

Other books in this series
Blue Moon Saloon

Perfection
(a short story prequel to the series)

The Wolves of Twin Moon Ranch

Charmed in Vegas / Shifters in Vegas

Paranormal romance with a zany twist

Gambling on Her Dragon

Gambling on Her Bear

Get your free e-books now!

Sign up for Anna’s newsletter at
annalowebooks.com
to get three free books!

In the darkest corner of an alpha’s broken heart, fate ignites a flicker of hope. From lusty wolves and burly bears to decadent dragons, these alphas hunger for inner peace which can only come from finding their perfect mate. Seven best-selling authors each bring you a series of standalone books filled with redemption, love, and reckless desire — not to mention a whole lot of primal growling as these alpha heroes claim their fated mates.

Bear shifter Soren Voss lives and breathes for the new clan he leads. It’s all he has left after the rogue ambush that murdered the woman he loved — the woman he swears he’ll always love, even if it’s only in his dreams. But the day this alpha’s dream comes true is also the start of a nightmare, because his destined mate may no longer be his and his alone. Is it fate’s way of torturing him or his last chance at redemption?

Sarah Boone narrowly escaped the inferno that claimed her family and her home. For months, she’s been on the run with a secret that is rapidly becoming impossible to hide. But the clock is ticking, and she needs a place to settle down soon. She never expected to find the love of her life running a funky little place called the Blue Moon Saloon. Soren is darker and more dangerous than ever, but somehow more vulnerable, too. Does she have it in her to be the woman her world-weary warrior needs most of all?

Before we start... Be sure to
sign up for my newsletter
– you’ll get three free stories right away, and you’ll be the first to hear about new releases, special deals, and exclusive bonus content.

“Man, where are those two?” Soren looked around. “Everyone’s ready but them.”

Jessica stopped unwrapping the foil at the neck of the champagne bottle to chuckle. “I can guess where Janna and Cole are — in bed, snoozing or shagging.”

Soren sighed. It was to be expected of freshly mated shifters in his growing clan. But really, could those two not drag themselves out of bed by eleven?

“I’ll get them,” he sighed and headed out the back door of the café then through the entrance of the neighboring saloon he ran with his brother. The stairs creaked under his step as did the wide wooden floorboards of the hallway upstairs, until he came to the happy couple’s door and knocked.

The giggle that had been drifting through the door broke off abruptly. Yep, those two were busy, all right.

He let a few seconds tick by, swallowed away the lump in his throat, and knocked again.

“Janna!” he called, and even his inner bear winced at the way it came out. He hadn’t meant to bark quite so sharply, though it sure did come out that way.

Happy,
his bear reminded him.
Be happy for them.

He was happy for them. Truly. It was just hard to forget that he’d once dreamed of mornings like that. Joyous mornings, waking up beside his own mate. Carefree mornings, watching her smile in her sleep. Sensual mornings, when an innocent touch or a quick kiss could so easily turn into more.

When he closed his eyes, he could see her. Sarah, his destined mate. His dreams had been full of her last night, even more than usual. Beautiful visions of Sarah tossing her hair over her shoulder and telling him about her day. Of her turning to look at him with those incredible emerald eyes.

What are you looking at?
she’d tease him.

His perfect, destined mate. He could picture the sun shining off her fiery red hair and smell her huckleberry scent. Sometimes, it seemed so fresh and near, he could swear she was still alive. He’d woken that morning believing she might be walking down the street outside. She’d felt so painfully real, so torturously close.

He flexed his fingers, straightened them, and curled them again. A little ritual that kept the pain and anger at bay as well as keeping his bear claws tucked safely inside. Later on, he’d head to the woods and scrape those three-inch claws down the trunks of a few trees. He’d let his bear cry and roar everything he couldn’t let out as a man. He’d rip at one tree after another until he was worn and bleeding and ready to pretend he was okay with the cards fate had dealt him for yet another day.

He cleared his throat and called out again. “Come on! Jess needs everyone downstairs, now.”

It was an important day for Jessica: pre-opening day in her new business, the café right next to the saloon. In fact, it was an important day for each and every one of them — the handful of wolf and bear shifters who’d banded together in this high-altitude Arizona town. They were growing as a business and as a clan. Looking to the future. As alpha, it was his job to lead and coordinate it all.

Look to the future,
his bear mumbled unenthusiastically.
Not to the past.

Which would be easy to do if his mate were alive — and she would have been if he hadn’t been away the night of the rogue attack she’d fallen victim to along with so many others who’d been burned alive.

“Get moving already,” he said, as much to himself as to the happy couple behind the door.

He lumbered down the stairs and back into the café, where he snagged his second coffee of the day and thought of his grandfather, the legendary alpha, who had lived decades after his mate died. Decades that might have been his best as an alpha, because he lived entirely for the clan.

Soren snorted. Technically, that ought to mean he was all set to become the best fucking alpha of all time, because he’d lost his mate so young. He wasn’t even forty, damn it. Not even close. He hadn’t even had a chance to fully bond with the love of his life through a mating bite before she died. Hadn’t had the chance to reveal to her who he truly was — or what he was. A bear shifter — a pretty damn ferocious one who would fight to the death for her, if only he had been given the chance.

He cursed fate for the thousandth time in the past year and shuffled slowly to join the shifters gathered in the front room to toast the opening of the café.

“They coming?” his brother — the only other bear shifter in their unusual little clan — asked.

He nodded and looked around. The other three present were all wolf shifters, two from neighboring Twin Moon pack and the other, his brother’s mate, Jessica. The woman of the hour.

He took a deep breath and did as a good alpha should: locked away his own regrets and focused on the good of his clan.

“Okay, everybody. Here we go,” Jessica said once Janna and Cole finally turned up. “To the Quarter Moon Café.”

“To the Quarter Moon Café,” everyone echoed with a hearty cheer.

“To a great manager.” Tina, who’d helped them lease the property, raised her glass in Jessica’s direction.

Soren raised his glass higher. Jess deserved it after all the work she’d put in at the saloon and now, the café.

Soren nodded to himself. That was the next problem he had to solve: finding more staff to run the saloon and the café. While their customers were mostly humans, it was safer to keep an all-shifter staff. Otherwise, it would be too easy for their shapeshifting abilities to come to light. That was the only thing shifters truly feared: exposure. Even though most shifters were peaceful, law-abiding types, there was no telling what kind of outcry would result if humans discovered there were shifters living among them.

“I found someone to help here all next week,” Tina said. “After that…well, I’m working on it.”