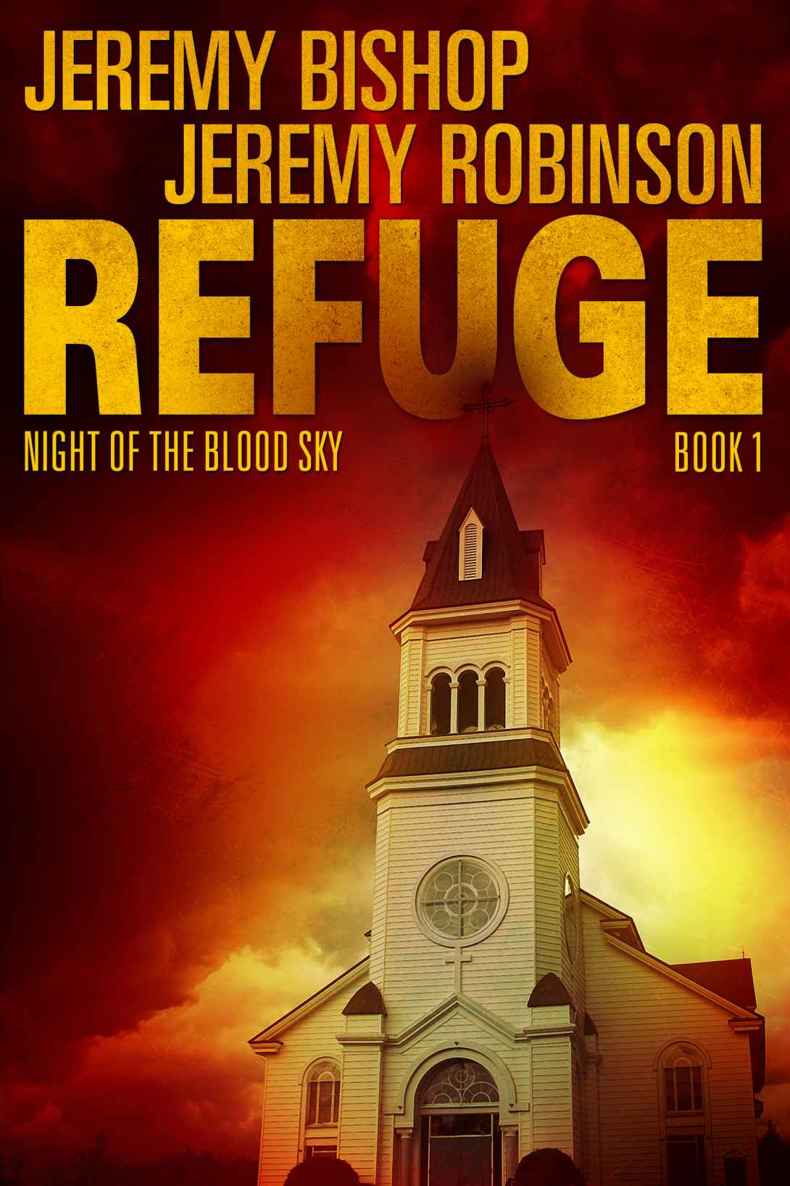 Book 1: Night of the Blood Sky

Rebecca Rule
is the sheriff of Refuge, New Hampshire. Her biggest concern is the rowdy summertime revelers making their way up from Massachusetts and New York. With most of the town’s residents in neighboring Ashland, for the Fourth of July fireworks show, Refuge is quiet. That is, until the Baptist Church’s bell starts ringing—on its own.

The bell chimes faster and faster, reaching a frenetic pace, as though rung by the Devil himself. But the bell is just the beginning. The air shimmers. The night-time sky fills with a burning red aurora. The moon, previously a crescent, is now full. And just hours after dusk, the sun returns to the sky, revealing an endless desert where there was once a mountainous pine forest.

Rule must guide the confused and frightened residents of Refuge through the first terrifying hours of acclimating to this horrifying new environment, while protecting them from inhuman dangers both inside and outside of the town’s newly clean-cut borders.

In a world gone haywire, only one thing is certain, no one in Refuge will ever forget the night of the blood sky.

REFUGE is a serialized novel, co-authored by #1 Amazon.com horror author, Jeremy Bishop, and five other authors, including Amazon.com bestsellers Kane Gilmour and David McAfee,
USA Today
bestseller, Robert Swartwood, and newcomer Daniel Boucher. The novel will be released in five parts, every two weeks starting November 12, 2013, but it will also be available as one complete novel as soon as the fifth episode is released. So read along as they appear or hold out for the completed novel. Either way, you're in for a creepy ride.

Book 1: Night of the Blood Sky

By Jeremy Bishop and Jeremy Robinson 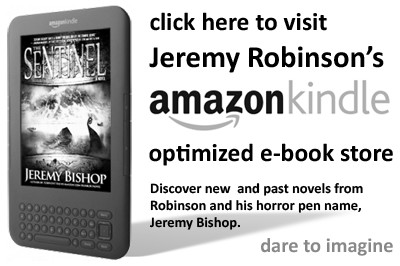 They wandered in the scorching desert; they found no city to dwell in. Hungry and thirsty, their soul fainted in them. Then they cried unto the Lord in their trouble, and he delivered them out of their distresses. And he led them forth by the right way, that they might go to a city of refuge.

“What! You can’t be serious, Becky,” Phillip Beaumont said, in a voice that sounded closer to a petulant six-year-old’s than that of a grown man. “I’ve only been parked here five minutes tops.” The bespectacled man thrust his milk gallon and bag of groceries out as evidence.

“Don’t much matter, Monty. You can’t be breaking laws in my town, especially not those regarding the less fortunate.”

Monty’s arms fell slack, the heavily weighted plastic bag nearly scraping against the parking lot pavement. His head tilted back and his mouth fell agape, emitting a sound like a wounded moose. “Becky, there hasn’t been a handicap person in Refuge since Bill McGill kicked the bucket five years ago.”

“Law’s the law, Monty. We’re going to be swimming in vacationing Massholes and New York Yankmees for the next three months. If I go soft now, we’re going to have to rename the town Bedlam come the end of summer.” Sheriff Rebecca Rule ripped off the ticket stub and held it out. “And it’s ‘Sheriff’ while I’m wearing the hat, okay?”

Monty took the ticket, slid it into his grocery bag and with an exaggerated sigh, said, “See you at the Ashland fireworks?”

“If I were going to the fireworks, I’d be on my way already.” Rule turned her eyes to the dark blue sky. “Gonna be dark inside of fifteen minutes. B’sides, you can see ’em fine from right here in town.”

Main Street arched over the top of a tall hill. From the center of town in front of the First Baptist Church and Memorial Park across the street, the view stretched out for miles to the north and south. And from the rooftops of the few three-story storefronts on either side of the street, you could look over the surrounding pine forest to the west and catch a glimpse of the White Mountains on a clear day, which was most days in Refuge. The easterly view was mostly blocked by Black Job hill, the tallest spot in town with clear views in every direction, upon which sat a single home, belonging to Winslow and Carol Herman.

Monty glanced at the sky. “Shit. I still have to pick up Susie and the girls.” He flung open the door to his black pickup truck, climbed in and slammed it closed. The giant beast of a vehicle roared to life, and Monty gave it two enthusiastic revs.

Rule tapped the window twice with her knuckles.

As the glass descended, Rule placed her elbow on the door. “I give speeding tickets, too. I don’t want to hear any squealing tires.”

Monty grinned. “Now come on, we all know which one of us is the better driver.”

Rule stepped back and gave a nod. “We also know which one of us carries a badge. And a gun.”

With a grin and a casual salute, Monty said, “See you in church, Beck, err, Sheriff.”

Rule gave a wave as Monty sped off.
The man has a boulder for a brain
, she thought, looking at the empty lot.
Thirty spaces, ripe for the picking, and he took the one handicap spot
. He was right, though; there weren’t any year-round handicap residents in Refuge, but with the Fourth of July being tomorrow, she didn’t want to risk one of the old rich people with fancy homes around Newton Lake having a hissy fit when their blue placard, bestowed upon them by the good Lord himself, failed to procure prime parking.

With the lot to Soucey’s Market now empty, Rule wandered toward the sidewalk. Main Street was mostly empty, too, except down by the bar. There were cars there all year long, at all hours and in nearly all weather. Only a blizzard could empty the bar, and not because the boys couldn’t get there—they all had plows. But it was those same plows that made them extra money come winter, and they got their plowing done before their drinking. Most knew well enough not to drink and drive in Refuge. Not since what happened to Bernie.

Rule didn’t normally walk the streets looking to give parking tickets. That typically fell under the purview of Deputy Jim Sweeney and Deputy Helena Frost. But Sweeney was in Ashland for the fireworks with most of the rest of Refuge’s fifteen hundred residents, and Frost was...well, she was confined to the office, at least for the night, on account of punching Casey Parks square in the nose. Granted, the seventeen year old deserved as much for pummeling fourteen year old John Bieman, but she should have shouted, “Stop, Police,” before hauling off and clocking him in front of sixteen people.

The walk will do me good anyway
, she thought, purposely putting a little spring in her step. She’d put on a few pounds in the past few years, and her uniform fit a little too tightly to be decent for a fifty-three year old woman. In her opinion, anyway. She wasn’t exactly a hot ticket, but in the north woods of New Hampshire, where the competition sometimes looked like those late 1800s photos of scowling farm matrons, being a flawed woman wasn’t always a problem.

She paused at a meter where a red compact car she didn’t recognize was parked. Still an hour left.
Damn
. She checked the plates. California.
That’s unusual
, she thought, and then moved on. The next three cars were all paid up, and upon reaching the fourth car, she realized she was wasting her time.

“Parking meters enforced between the hours of 8am and 7pm,” she read from the label. She stood up straight and put away the ticket booklet she’d been holding at the ready.

“Well then—” she started, but she heard a buzzing sound. Like the hum of those big power lines out by 95. Despite the volume, she knew the sound was distant. She listened for a moment, trying to pinpoint the direction from which the buzz originated, but it was suddenly drowned out by the roar of an engine.

She turned and saw Monty, Susie and their two little girls, Alice and Joy, beaming with innocent sugar-fueled smiles framed by freckles she could see from a distance, all waving from the pick-up’s window. Monty was speeding, that was for sure, but the crafty devil knew Rule wouldn’t give him a hard time with the girls in the car. He gave a honk and disappeared down the hill and around the corner at the far end of Main Street.

They might just make it in time
, she thought, looking at the now purple sky. With her plan to write tickets until the distant fireworks began now ruined, she stood in the middle of the sidewalk wondering what to do. She pulled her walkie and pushed the transmit button. “Frost, this is Rule, please tell me someone has called. Over.”

The radio crackled, and then Frost’s voice replied, “Sorry, Sheriff, if you wanted action, you should have taken a job in Nashua. But don’t worry, you’ll be plenty busy after the fireworks. We usually nab one or two overzealous drivers after the finale. Over.”

“Great. Thanks for the head’s up. Over and out.” She buckled the radio back in place and rolled her neck on her shoulders. While she liked giving a good ticket, she wasn’t looking forward to the late night. And she still needed a way to kill time before the fireworks began.

The sound of shattering glass turned her attention to the bar door. The Brick House Bar and Grill wasn’t known for drunken fisticuffs. Most in town were responsible drinkers. But tonight was the Fourth, so maybe someone new was mucking things up. She glanced at the California plates parked five spaces away and squinted.

Still, she had ten minutes to kill, and chatting with Walter, the bar’s owner, always left her with a grin. Not just because he had been Bernie’s best friend, but because he had a wicked sense of humor and knew everything about everybody. Including her.

Wearing a grin she wasn’t aware of, she stepped toward the door, reaching for the handle.

She stopped, noticing the faint buzzing sound again.
What...

Loud shouting, muffled by the bar’s door, pulled her attention back to the Brick House. She couldn’t make out the words, but the tone held the sharp punch of angry cursing. She forgot all about the frantic sounding hum and took hold of the door handle.