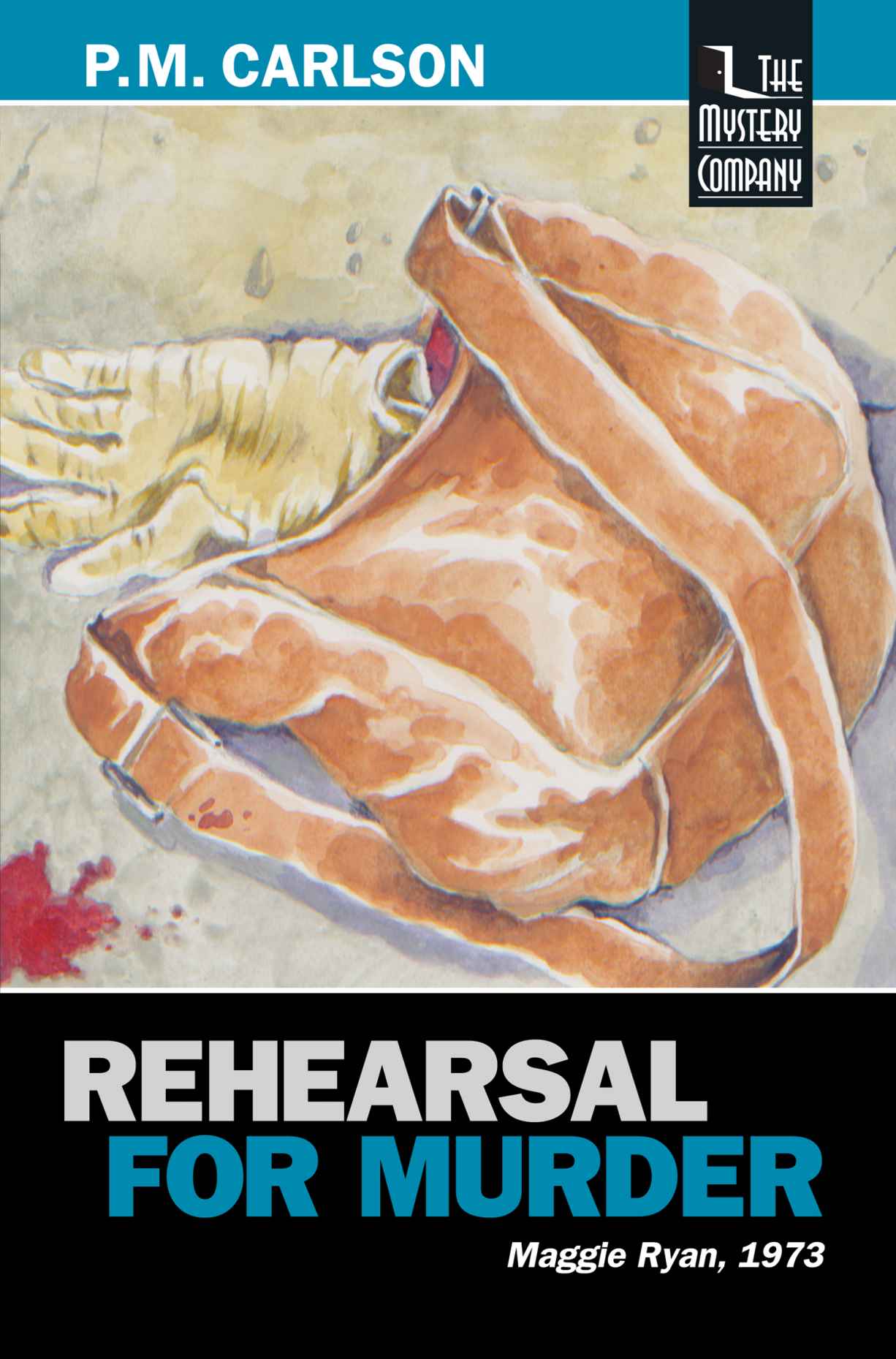 The Mystery Company, an imprint of Crum Creek Press

To the Yankee and the Rebel

with love and thanks for everything

I hold the world but as the world, Gratiano;

A stage, where every man must play a part,

And mine a sad one.

Special thanks for sharing their expertise go to Dana Mills and Barbara Dean, who against all odds succeed in being fine actors and fine parents simultaneously; and to Robert Bruyr, Senior Business Representative of Actors’ Equity.

“Damn!” yelped Ramona Ricci, catching at a nearby elbow to keep from falling. “I’m supposed to be giving birth to a prince. Not an elephant. Not a goddamn woolly mammoth!”

“Sorry.” Sprawled inelegantly between her feet, the ancient dust of the rehearsal loft gritty in his mouth, Nick O’Connor apologized to her leg warmers. “I tried to make myself tiny and embryonic. But Stanislavsky can only take you so far.”

“The Prince of Whales,” murmured Larry Palmer, who owned the lean and handsome elbow Ramona was clutching.

“Har-har.” Ramona jerked her rehearsal skirt clear of Nick’s ears. “Think it’s funny, do you? You’ll think so when we close after three days. You unemployed, and me in debtor’s prison. Hilarious!”

Ramona was small, vibrant, and still famous at forty. Nick liked her in her better moods. A little body with a mighty heart. But just now she was whirling furiously on the slender black choreographer, eyes ablaze. “Daphne, sweetie, observe! I’m five four. Nick down there is about seven feet tall and weighs hundreds of pounds. How can you expect him to somersault between my legs?” Her angry gaze flicked to the black teenage girl dressed in jeans and a vibrant orange and black dashiki who was sitting quietly against the back wall. “Plus we’re running a goddamn babysitting service for you!”

“Hey, wait a minute, you skunky bitch!” roared the girl, jumping to her feet. Her hair was puffed into an Afro twice as big as Daphne’s, and scowling, she reminded Nick of an enraged dark dandelion.

Daphne pointed an imperious finger at her. “Hush your mouth, Calypso Weaver!”

Propped now in a sitting position, Nick could see the sudden angry tears in Daphne’s eyes. Damn Ramona. What was eating her today? Though always opinionated, she had never been vicious. He said briskly, “Daphne, do you think it might work with a slide instead of a somersault? So I could keep my butt down until I was clear?”

“Maybe. Though the somersaults look good, more surprising.” Daphne was professional again, running lean fingers through her Afro as she squinted thoughtfully at the unpromising configuration of platform, dusty floor, and sweaty bodies in the SoHo loft and somehow visualized a rollicking moment in the theatre. “Maybe we could use the platform, gain eight inches that way.” Nick brushed the dust from his balding head, glad that his dumb question had helped. Though he was not quite as large as Ramona claimed and was in fact quite nimble, he was feeling huge and clumsy at the moment. Brontosaurus Nick. He hoped that disabling the star was not to be added to his other fiascos today.

It had not been a good day, despite its promising start. Nick had awakened to a visual feast of long legs, warm breasts, sleepy blue eyes smiling into his. Five thirty a.m. They should have an hour. Groggy but enthusiastic, he had set himself to rousing his friendly partner to share the delights. So conjunctive to my life and soul. Maggie was more than compliant. For a few moments it seemed like the old days.

Then came the noise.

“
Merde
!
” she swore, suddenly still in his arms.

“Ditto,” said Nick, pausing with her.

But it came again, and swiftly she was gone.

Nick lay, angry and detumescent, in the abandoned milky bed. His head told him she had no choice; but the rest of him screamed betrayal. “There’
s
Casablanc
a
,” he called after her. “There’
s
Cyran
o
. There’s eve
n
Spiderma
n
. A million stories about the conflict between love and duty. Doesn’t love ever win?”

“How abou
t
Romeo and Juliet
?
” Maggie—baby Sarah in her arms—was giving the question due consideration. “O
r
Carme
n
? But I think they’re saying if it wins, you lose.”

“You lose both ways,” grumped Nick, and got up to shower. The disposable lover, O’Connor Interruptus. And all because—

“Let’s try it from the platform,” Daphne’s voice broke into his thoughts. Poor Daphne, trying to choreograph a steamroller and getting chewed out for her pains. But, plucky creature, she was disguising her rage, saying almost eagerly, “Dive down to the roll on this level, then line up in front of Victoria and Albert instead of behind them.”

“In front of us?” asked Ramona suspiciously.

“We’ll be on the platform, Victoria dear. Very regal,” said Larry, striking an appropriate pose. A gold chain winked against his manly chest. Nick, thick and far from handsome, envied Larry’s flair for looking romantic even in rehearsal sweats. A very riband in the cap of youth. Love probably won over duty in Larry’s life.

Not with Ramona. Not today. Ignoring Larry’s virile charms, she stalked away to slump into a folding chair and light a cigarette. “Well, let’s have a look at this great idea. Jaymie, hop to!”

Her understudy hurried from the chorus. Jaymie Price, the daughter of a well-to-do Chicago divorcée, was one of the few chorus members who didn’t have to scramble for table-waiting or typing work between jobs. She was as dimpled and dark-haired as Ramona. But she was taller, quieter, and her voice, while lovely, lacked the emotion and power that had lifted Ramona, fifteen years ago, to stardom. On stage Ramona flamed; Jaymie merely glittered. Ramona stopped her now wearily. “No, no, sweeties, from the end of the assassination scene. We have to get up on the platform somehow.”

“Right, mates.” Derek Morris wiped back his pale hair and shifted to an earlier melody. His piano sat at the side of the big industrial loft, behind one of the peeling steel support columns that marched inconveniently through the battered former factory. The actors scrambled to a different configuration, picking up top hats and canes that were incongruous with their shabby rehearsal outfits of old shirts, tights, and sweats. Looped and windowed raggedness. Well, acting was a good way to avoid getting rich. Nick stationed himself at the rear of the scruffy group.

“Bang!” The young actor who played the assassin aimed a plastic rehearsal water pistol at Jaymie and the others gasped dutifully. “Bang!” A second pistol pointed at her. Then Nick and the others swarmed over him, imprisoning him behind the vertical bars of their walking sticks. He peered out of the sudden cage with mournful eyes.

“The would-be assassin was jailed immediately,” intoned Cab Collins, the hearty Chairman, from his podium across the stage. “Fortunately he had forgotten to load his pistols.” The others cheered. “Queen Victoria’s popularity soared!” The cheers grew louder. Larry and Jaymie were slipping away from the group to the center of the raised platform, while the others, under Daphne’s direction, lined up at the rear. “And soon there was reason for more popularity still. Because, back in the royal bedchamber ...”

“Ooh! Victoria!” Larry pulled Jaymie into a cliché clinch. They both leered happily at the row of folding chairs as Derek launched into the introductory bars of the next music-hall melody.

“But Albert, will we always be so happy? What does the future hold?”

Daphne was calling over the music, “Same steps here, Larry, but stay up on the platform. Right, that’s it.”

“You’ll love ’em!” Larry twirled her to the front edge of the platform and stood aside while she planted herself, legs apart, rehearsal skirt ready to hoist. “We’ll have, first, a girl!”

Thickset Edith Bigelow plunged off the platform between Jaymie’s feet, rolled forward, then rose to a kneel, grinned at Ramona and the folding chairs, and shuffled on her knees to the side.

“Then a girl, then a boy!” Actors dove through to join Nick and Edith until nine knelt in a row. “A dynasty!” exulted Larry. “Vicky, future Empress of Germany! And Bertie, Prince of Wales, future King of England!” He continued the roll call of the grand duchesses, princes, and dukes that Victoria and Albert had spawned. Hopping on his knees in the kick line with the other royal children, Nick had to sympathize with Victoria’s dismay. Even one child could disrupt a life. Could lock into a person’s emotions even while destroying sleep, career, sex life. Nine would be appalling.

The song ended. Ramona jetted a last fierce stream of smoke at them and ferociously ground out her cigarette with the toe of her laced dancing boot. “Possible,” she admitted. “Let’s give it a try this way. It looks a little dead, of course. But thanks to dearest Daphne, I’ve never missed a performance in my life, and I won’t start now.”

Daphne’s glance at Ramona crackled with black-eyed fury. Jaymie herself turned away from Ramona with seeming calm and retrieved her can of Sprite. But Nick saw that her hands were shaking.

She's Having the Boss's Baby by Kate Carlisle
Eating the Underworld by Doris Brett
Mathematics and the Real World by Zvi Artstein
Feast on Me by Terri George
WB by test
The Death Ship of Dartmouth: (Knights Templar 21) by Michael Jecks
Theta Waves Book 1 (Episodes 1-3) by Atkinson, Thea
Lucky Thirteen by Janet Taylor-Perry
The Bitter Tea of General Yen by Grace Zaring Stone
Blood on the Line by Edward Marston
Our partner