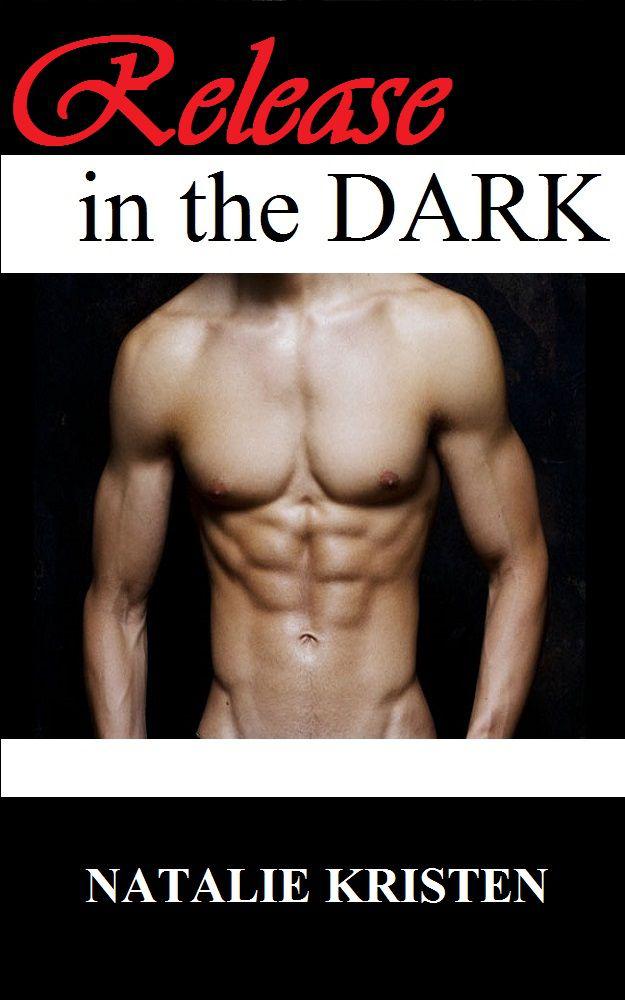 RELEASE IN THE DARK

This
is a work of fiction. Names, characters, places and incidents are
used fictitiously or are the products of the author's imagination.
Any resemblance to actual locales, events, establishments or persons,
living or dead, is entirely coincidental.

RAPTURE
IN THE DARK (Book One)

RELEASE
IN THE DARK (Book Two)

For my sister and
Aunt

In
a rapture of rage, for perfection's endowment,

Thought
and feeling and soul and sense—

Merged
in a moment which gives me at last

You
around me for once, you beneath me, above me—

Me—sure
that despite of time future, time past,—

This
tick of our life-time's one moment you love me!

RELEASE
IN THE DARK

I struggle desperately as I
watch those precious bubbles of air float out of my mouth and rise to
the surface. I don't think I can hold my breath any longer, but
those hands don't let up even when I thrash and twist in pain and
panic. Those big, hard hands continue holding my head underwater,
even when my own hands slap madly against the edge of the barrel. My
lungs are burning, straining, about to explode any instant now. I
can't see clearly, much less think clearly.

This is no training. This is
torture!

I reach back and try to claw at
those strong hands holding my head down, preventing my head from
breaching the surface of the water. But it is no use. Irin is too
strong.

Right now, I see her as the
enemy, the enemy who is trying to destroy me. Only she is not.

Irin is the leader of the
resistance cell that I am now a part of, all thanks to Jaxon. Irin
had told me that the resistance cells are kept small and separate,
having just a few members so that in the event of capture or
infiltration, the enemy can only extract limited information from the
compromised cell. The underground bunker that we are hiding in is
small and cramped, but well stocked and well hidden.

Jaxon brought me here, after he
saved me. He rescued me from the Palace, from the cruel whip and
whims of the Emperor and made me a member of this small resistance
cell.

The man who captured me, took
me, saved me. And loves me.

At the thought of Jaxon, my body
relaxes and my frayed nerves calm down enough for my thoughts and
will to order themselves. I can do this. I have survived as a Siren
in the Palace. I can survive anything.

Snapshots of my time in the
Palace flash through my mind. My thoughts rewind back to the very
beginning when I first met Jaxon. My body has stopped struggling and
my lungs quietly and determinedly hold on to the limited air in them
as I watch the images flash before my watery eyes.

I first met Jaxon ten years ago
when I was barely eight. I had been too tiny, too terrified and too
damn weak to save my mother. He had been an eighteen-year-old
Captain in the Imperial Army then. When the Imperial army thundered
into our town, the Commander of the invading unit had laid his
rapacious eyes on my mother as she was trying to herd me home safely.
Jaxon had tried to stop his Commander from taking my mother away
from me, from raping a defenseless woman in front of her screaming
child. That day, I saw my mother brutally ravished and killed right
in the middle of the street. And I saw a brave young Captain shot by
his Commander for trying to protect my mother and me. His anguished,
brown eyes held mine with a secret promise as he was dragged away,
bleeding from a bullet wound in his shoulder.

The Emperor had been out hunting
with his guards, and had come galloping into the town square, just as
I was about to be branded with a red hot iron by Officer Goddot. My
crime—dropping one piece of the weapon that I was assembling in
the factory Officer Goddot was overseeing. The Emperor had ordered
his Commander to cuff me and deliver me to the Palace. Commander
Jaxon Ryleth had done exactly as his Emperor ordered. I became a
Siren in the Palace. Behind the gilded walls of the Palace, deep in
the dungeon, young women and men are kept for the Emperor and
Empress's pleasure. I saw Slaves being made to fight to the death in
front of the Emperor and his guests. I remember Owen Vesparr, the
white-haired, deeply scarred Slave who had been chosen to service the
Empress in her shadowy, flame-lit chambers. The Empress had chosen
Owen, and Owen had chosen—me.

My heart rate speeds up at the
memory and I almost inhale sharply. I squeeze my eyes shut and
refuse to allow any water to enter my lungs.

What Owen did to me—that
is over. He had forced himself on me, spread my legs while I was
hanging by my wrists in the Empress's chambers, and forced his mouth
on me, invading me with his tongue so that he could get hard, hard
enough to satisfy the Empress. I had been forced to watch them, my
eyes held wide open by steel clamps. After the Empress had used Owen
and mercilessly drained his body, she had ordered Dr. Rolin into her
chambers. Both Owen and I had been injected with a clear serum, and
I had woken up alone in my cell in the dungeon.

My fists clench as I shake away
this horrible memory. Unbidden, another vision slams into my mind.
I see Jaxon this time. He is watching me as he stands outside Dr.
Rolin's laboratory, his eyes filled with pain and a myriad of
conflicting emotions. I see him holding me, giving me one long,
lingering kiss before letting me go. I see him coming to my cell in
the middle of the night and carrying me to his chamber. I see him
taking me in his bed, gently, tenderly. I see him putting my
mother's earring into my palm and then carefully putting it on for
me. And I see him hugging me as if his heart would break when he has
to leave the Palace.

Jaxon never forgot me. He had
been keeping my mother's earring with him all this time, hoping to
return it to me one day. He had gone back that very night even with
his injured shoulder, to look for me, and he had found that small
aquamarine stud in the blood. His blood mingled with my mother's.

Jaxon's image suddenly contorts
into the Emperor's snarling visage in my mind. The harrowing memory
of the Emperor whipping me as I was shackled to his bedpost makes my
eyes snap wide open. I can hear the blood pounding furiously in my
ears, as bubbles spurt from the corner of my mouth like blood, all
the air leaking out of my lungs in a rush. In my mind, I see Jaxon,
smashing through the window behind me and attacking the Emperor in a
blind, murderous rage. He had snatched me up and spirited us away on
his motorcraft while I was half-conscious, half-delirious from blood
loss and shock.

And he had brought me here, to
this underground cell. Jaxon had been helping the resistance all
along, even while he was a Commander in the Emperor's Imperial Army.

Jaxon is a fighter, a leader. I
hadn't wanted him to fight, I had been so afraid of losing him again.

But he said he was fighting for
us, for a future, for the chance of a future.

Jaxon loves me. He has told me
so unequivocally through his words, his actions, his kiss, his touch.

I have never said those three
small words back to him. Instead, what I told him was:
I hate
you
.

At this painful realization, I
start to shiver violently. I open my mouth and water rushes in,
burning my nose, throat and every cell in my body.

My silent underwater scream
erupts into a loud, noisy spluttering and choking as I am yanked
roughly out of the water. I collapse in a convulsing heap on the
ground, water leaking and spurting from every orifice. Heaving and
throwing up water as someone thumps my back, I try to blink the
water, or are they tears?—out of my eyes.

“
You okay, Zoey?” I
hear Irin's disembodied voice somewhere above me.

I nod, unable to speak.

“
Good. Your timing is a
lot better.”

I cough in response.

“
I know that you're
wondering why you're the only one undergoing this grueling training.
You're the newest member of our cell, so all the other members have
already gone through this training. What we are putting you through
is nothing compared to what you would face in the hands of the enemy.
You must be prepared, physically and psychologically. Do you
understand?” Irin cocks her blond head at me.

“
Stand up,” she
commands, holding out a towel. “Dry yourself. Compose
yourself. Gather your strength and wits. You have to join the
others in the training room in a minute.”

I grab the towel and rub and pat
my hair and face furiously. I miss Jaxon. He left for a mission
yesterday, but I already miss him like crazy.

I open my mouth to ask Irin if
she has heard from him, but her watch sounds an angry, urgent beep
and she turns abruptly away.

“
Irin Tanner here,”
she speaks curtly into her watch.

“
Irin, this is Lachlan Uly
from Cell 6K. Your missive never arrived.”

I see Irin's back tense. “He
left yesterday morning.”

“
He never showed up at the
rendezvous point. We've scouted the surrounding area but no news.”

“
We have not heard back
from him.”

“
I'll let you know if we
find out anything.”

Irin clicks off but she doesn't
turn around to face me. The towel slips from my hand as I stare at
the back of her blond head. Her tall, statuesque frame seems to
hunch slightly as she presses the buttons in rapid succession on her
watch, swiftly sending out a message. With a muttered curse, she
straightens her broad shoulders and pivots round.

“
Where is he? What
happened to him?” I have to force the words out through my
throat which is rapidly tightening, choking me and killing me.

“
No one knows,” she
says, looking me straight in the eye. “He never showed up at
the rendezvous point. There has been no contact, no news, no trace.
He just...”

“
He can't have just
disappeared,” I say, fighting to keep my voice even.

I shake my head repeatedly. “He
won't just vanish. He would never do that. He is in trouble, Irin!”
I lurch towards her. “Please...”

“
We are doing everything
we can to find...”

“
No! No, you don't
understand! He is in serious trouble! He may be in danger, Irin.”
I grab her hands, my eyes wild and panicked. “We have to find
him. I have to find him! I can find him, Irin. I will find him!”

My mind is in a whirl, my
thoughts making wild leaps as I walk the tension out of my body. To
and fro, left and right, on and on, I pace and mutter. I am not sure
how long I have been walking and talking in circles round the room
before Irin puts out a hand to stop me in my tracks.

Kyn Series by Mina Carter
Tethered 01 - Catalyst by Jennifer Snyder
Baby, It's Cold Outside by Merline Lovelace, Jennifer Greene, Cindi Myers
The Nightlife: New York (The Nightlife Series) by Luedke, Travis
The Rescue by B. A. Bradbury
Mother Finds a Body by Gypsy Rose Lee
Awakened (Book #5 of the Vampire Legends) by Knight, Emma
The Players by Gary Brandner
Deadly Relations: Bester Ascendant by J. Gregory Keyes
Stranded with the SEAL by Amy Gamet
Our partner