Read Reluctant Hero: A 9/11 Survivor Speaks Out About That Unthinkable Day, What He's Learned, How He's Struggled, and What No One Should Ever Forget Online

Reluctant Hero: A 9/11 Survivor Speaks Out About That Unthinkable Day, What He's Learned, How He's Struggled, and What No One Should Ever Forget

BOOK: Reluctant Hero: A 9/11 Survivor Speaks Out About That Unthinkable Day, What He's Learned, How He's Struggled, and What No One Should Ever Forget
12.41Mb size Format: txt, pdf, ePub
Read Book Download Book
ads 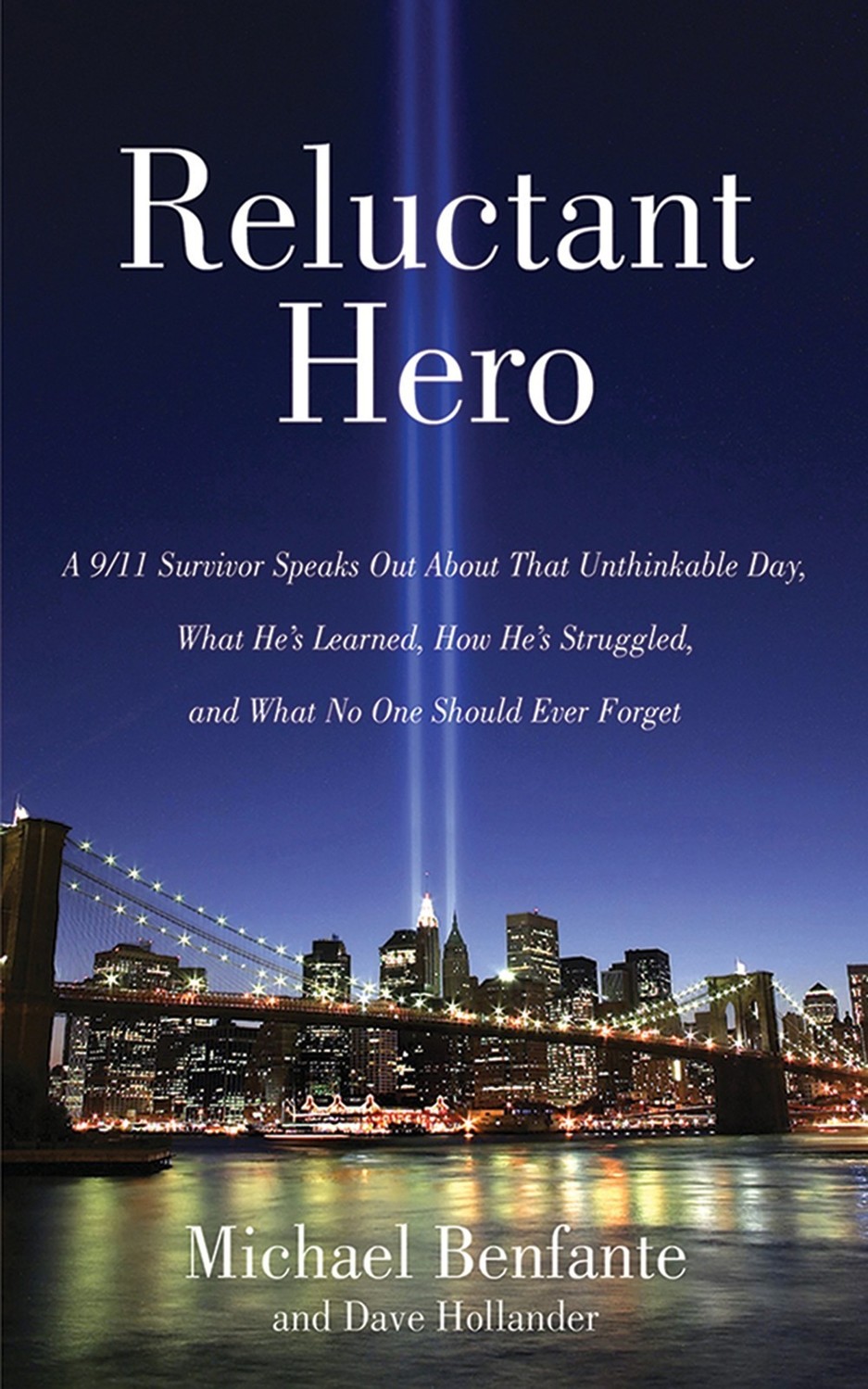 A 9/11 Survivor Speaks Out About That Unthinkable
Day, What He’s Learned, How He’s Struggled,
and What No One Should Ever Forget

All Rights Reserved. No part of this book may be reproduced
in any manner without the express written consent of the
publisher, except in the case of brief excerpts in critical
reviews or articles. All inquiries should be addressed to
Skyhorse Publishing, 307 West 36th Street,
11th Floor, New York, NY 10018.

a perfect father to a child, a loving man to a son

Preface: Why This Book, and Why Now?

Introduction: How Did I Get Here?

PART I A Jersey Guy

PART VII We’re in This Together

Epilogue: To Be Continued

And we have seen our national character in eloquent acts of sacrifce. Inside the World Trade Center, one man who could have saved himself stayed until the end and at the side of his quadriplegic friend. A beloved priest died giving the last rites to a fire-fighter. Two office workers, finding a disabled stranger, carried her down 68 floors to safety. A group of men drove through the night from Dallas to Washington to bring skin grafts for burn victims.

In these acts and many others, Americans showed a deep commitment to one another and an abiding love for our country. Today, we feel what Franklin Roosevelt called, “the warm courage of national unity.”

And our hearts are full of gratitude for those who saved others. These men and women remind us that heroism is found not only on the fields of battle. They remind us that heroism does not require special training or physical strength. Heroism is here, all around us, in the hearts of so many of our fellow citizens, just waiting to be summoned—as it was on Saturday morning.

Their actions, their selflessness, also pose a challenge to each of us. It raises the question of what, beyond the prayers and expressions of concern, is required of us going forward. How can we honor the fallen? How can we be true to their memory?

—
President Barack Obama
Speech at the memorial service for the victims of the shooting in
Tucson, Arizona, January 12, 2011

—
Black Hawk Down
From the screenplay by Mike Nolan, based on
the book by Mark Bowden

PREFACE:
WHY THIS BOOK, AND WHY NOW?

T
HE WHOLE TOPIC
of 9/11 is never a matter of small talk to me. It’s no academic discussion. If someone casually says to me, “Hey, tell me your story,” I tell them, “Nah, it’s not going to work that way.” But if somebody asks me, sincerely, “You were
that
guy? Can you talk about it?” Then I say, “Why don’t you ask me questions, tell me what you want to know, and I’ll tell you what I can.” That’s so much easier. I can handle that. Any other way is exhausting for me, and I don’t want to do it.

To this day, it’s impossible for me to give a summary explanation of how I really felt and what I really went through without telling everything—
every single thing
that I went through. I don’t know how, psychologically, to tell someone an abbreviated version of what happened to me. People ask, and I say, “Yeah, I was there.”

Then they ask for more.

“Yes, I carried this woman down sixty-eight floors.”

It’s a very intense and personal place to go. It takes a lot out of me. I don’t like bringing it up. I don’t go around telling people I carried a woman down sixty-eight flights in Tower 1 on 9/11.

“There I was, World Trade Center, September 11 … ” This isn’t the goddamn
World of Commander McBragg
.

Will I tell the story if asked? It depends on who’s asking and what kind of emotional space they’re coming from. But my story is not a cocktail party trick or somebody’s cheap entertainment option.

Obviously, and for many reasons, it’s an experience I now feel compelled to share with all seriousness, honesty, and emotion. But I can only tell it one way. That’s from beginning to end, with nothing left out. And frankly, rarely are there times and places where that’s an easy or appropriate thing to do.

Suffice it to say that I don’t like telling this story. I don’t even like thinking about it. For almost ten years I’ve stopped telling it altogether. And I’ve never really told the whole thing to anyone. That’s hurt a lot of people. It’s hurt me too. I want to tell it now. I need to tell it.

And I want to get it right. I will try hard—very hard—to tell it exactly like I remember it.

I’m still not sure I understand
it
—what it’s meant, how it’s changed me. Some call me a hero for it—for what I did on 9/11. I’m not very comfortable with that. What I do know is I need to tell everything to everybody (and I need to hear some things as well).

I know that if I retrace my steps, I can tell you how I came to be on the 81st floor of the World Trade Center, Tower 1, on 9/11, sitting at my desk at 8:46 a.m. when the first plane hit just twelve floors above me.

And then I spent the next ninety-six minutes inside Tower 1. I made it out, barely.

I was one of the lucky ones.

Sometimes I feel so awful about it I can’t hear myself think a single thought. Other times I draw such hope and clarity from it. Either way, it’s time to talk about it. So let me try here to tell you, and myself, what happened. Like I said, I will try hard to get it right.

INTRODUCTION:
HOW DID I GET HERE?

I
SAT HALF-DAZED, DOWNING
beers and inhaling burgers at O’Reilly’s Pub on 31st and Broadway. It was an unusual lunch at O’Reilly’s for obvious reasons, but also because I was sitting in the back dining room. I’d eaten there a hundred times before, but I’d never sat in the back. That’s usually where the “business people” had lunch, at the round tables with the white linen tablecloths. That’s not where I usually sat. But this day it was sit there or sit nowhere. That’s how crowded it was.

Boozer went to the bar to get more beers. I sat, fidgety, at a table with John. John wasn’t saying much. Boozer yelled to me, “Raj!” (That’s how they know me at O’Reilly’s, after Roger Staubach.) He motioned for me to come to the front. “You gotta see this.”

I came and I saw. It was me. On television. I couldn’t believe what I was seeing. I really couldn’t believe the camera guy made it out of there. But there I was: Lost and off-balance amid rubble, dust, and debris; rumpled light blue dress shirt, loosened navy blue tie; my black bag over my shoulder, a bottle of water in my left hand. I looked like hell.

The camera moved closer, and the questions started.

Cameraman:
Who are you with?

My voice trembled slightly. Maybe only I noticed.

Cameraman:
Tell me what you saw and heard.

Me
: There were forty people in there. Just an explosion. I saw this light flash out my window. The whole doorway entrance to my office blew open. My office was freaking out. I just told them to calm down and get to the center of the office. Everybody was fine on my floor.

My voice was definitely shaky.

Me
: We just started heading down the stairs. I heard people were trapped in the bathroom. I ran to the bathroom. It was just [
pause
] blown out. I asked if anybody was in there. People weren’t in there. So I started going down the steps. I heard people shouting. I stopped at, like, sixty-eight; and there was a woman in a wheelchair, and I got her in the straps—the wheelchair—and I carried her down the steps. Carried her down sixty-eight floors, man. [
Coughs.
] Then we got lost on the 5th floor. It was chaos.

Cameraman
: Who do you work for?

Me:
Network Plus, a communications company out of Randolph, Massachusetts.

Cameraman:
How do you spell your name?

I couldn’t reconcile it—the reality of where I’d just been and the comparative normalcy of O’Reilly’s. For a moment I felt the fear from before, from down there. Dryness crept up the back of my throat. Out of the corner of my eye, I could see Boozer staring at me. I felt more eyes on me from all around the bar. Somebody patted me on the back. I looked up. I was still on television.

On the TV the camera stayed with me as I walked toward John. I grabbed his arm, and we circled for a moment, disoriented, trying to get our bearings. I muttered to no one in particular, “It’s chaos, man. It’s chaos.”

As we walked out of the frame, the camera surveyed the devastation behind us, slowly focusing its lens toward the top of the North Tower, where smoke streamed from the upper floors. Abruptly, the segment cut to the tower imploding, capturing full audio of the deliberate deep, rumbling sound. Next they cut to a hand wiping dirt from the camera lens, revealing a clear ground-level shot of me running—
running for my life
—full-speed toward the camera, John running behind me, and a ferocious cloud of white dust coming up fast behind us, enveloping everything in its path. Debris flying, voices crying out. People swept off their feet into the air. You could hear the sounds of large objects and particles scraping against the cement ground, against metal signs, and against vehicles. The white dust consumed the entire television screen. Then blackness. Blackness and silence. I’ll never forget that blackness.

BOOK: Reluctant Hero: A 9/11 Survivor Speaks Out About That Unthinkable Day, What He's Learned, How He's Struggled, and What No One Should Ever Forget
12.41Mb size Format: txt, pdf, ePub
Read Book Download Book
ads

The Genuine Lady (Heroines on Horseback) by Alexander, Sydney
Where She Belongs by Johnnie Alexander
Bulletproof Vest by Maria Venegas
Influence by Andrew Snadden
Romance: SCREWED (An Arranged Marriage to the NFL Bad Boy) (A New Adult Contemporary Athlete Sports Football Romance) by Bridget Lang
All These Lives by Wylie, Sarah
At Any Price (Gaming The System) by Aubrey, Brenna
False Lines (Blurred Lines Volume 7) by Wilde, Breena
The Infernal Optimist by Linda Jaivin
A New Beginning by Sue Bentley
Our partner