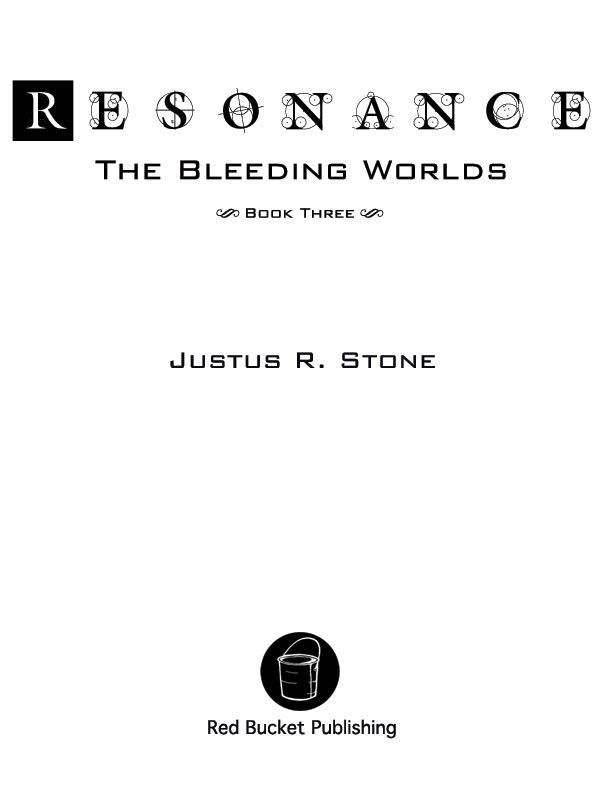 6 - Answers on the Horizon

This book is a work of fiction. The characters, incidents, and dialogue are drawn from the author’s imagination and are not to be construed as real. Any resemblance to actual events or persons, living or dead, is purely coincidental. Any references to real world streets, cities, etc. are used in a fictional manner.

Resonance–The Bleeding Worlds Book Three
. Copyright © 2014 by Justus R. Stone. All rights reserved. No parts of this book may be used or reproduced in any manner whatsoever without written permission except in the case of brief quotations embodied in articles and reviews.

Cover Imagery - Male Model by GraphicPAStock
http://graphicpastock.deviantart.com
, all other images and editing by Carolyn Macpherson

Summary:
Trillions of existences wiped out in a single moment.

At the center of the disaster stands Gwynn Dormath. He has been called both a hero and a harbinger of the end of all things. A single boy thrust unwittingly into a game of old gods and ancient horrors.

Now, injured both in body and mind, if he hopes to save the ones he loves, he must undertake his most perilous and strange journey.

Between all things lies the Veil. Home of the souls of humanity and the power source for all Anunnaki, it is a place of great power and even greater danger. If Gwynn is to move forward, he must plunge into its murkiest depths and face not only its own guardians, but the darkness within himself.

Meanwhile, the former members of Suture fight to find their own place in these damaged worlds. As alliances are formed and new enemies battled, they inch forward to a conflict only prophecies and myths could predict, or hope to understand.

Resonance is the third novel in The Bleeding Worlds series.

PART ONE
Cataclysm
I

Connecting with someone’s soul was difficult. To lower your defenses, allowing someone to see your faults and fears, could be equal parts violation as joy. In a lifetime, even hundreds of lifetimes, finding
one
person to share that level of intimacy was rare.

Adrastia had pulled the five remaining members of Ansuz into her soul.

Traversing the Veil was dangerous. Through the years, Anunnaki discovered their soul could be used as a shield to accomplish it. First, it meant facing the enormity of your soul and staying sane. Of the few who braved the experience, fewer succeeded.

Assuming you survived, you faced the task of shaping your personal experience.

Adrastia envisioned the Veil as a long hall, many stories high, lined with an endless number of doors. She’d never bothered to imagine a color for the walls aside from white. It was easier to maintain the illusion without too many details. But the walls weren’t without character—their paint showed scratches and scars. None of these originated within her imagination, it was her mind interpreting the Veil and conforming it to her chosen scenario. Chips in the paint, cracks in the walls, were all symptoms of Cain’s passage and the continual tearing of the Veil by Anunnaki.

Another feature beyond her control was the falling star. It hung in the air, the trail of its fiery descent frozen like a photograph. Always out of reach, this too was a permanent cancer within the Veil. As creatures of linearity, Anunnaki experienced the Veil as it existed the moment they entered. But their actions lived here forever, trillions of layers of events, hidden from each other. Only Cain and one other managed to cross the Veil in a diagonal manner, traversing time in the process. But some events resonated forever, influencing every time and place. The falling star was such an event. Or maybe Adrastia just saw it since it influenced
her
every time and place.

“Keep your eyes shut,” she ordered her companions. She supposed they weren’t words, just thoughts directed along the currents of energy within the Veil. “Try not to think about this place. Don’t guess what is here, or what you might see.”

The walls shimmered, like heat waves rising from the pavement on a summer day.

Thought was energy—synapse firing bursts of electricity along their intricate network. The Veil, an entity of energy, responded to these same electrical impulses. It was how she constructed this area, making it conform to become her “reality.” But she had introduced five other sets of thoughts. Trying to have them think of nothing, to focus on nothingness, was dangerous. She’d never tried this with more than two other people. Five strong-willed Anunnaki was proving unwieldy.

Adrastia turned her focus on one of the doors.

In her hall, they were all the same—a wood door, painted white—though years of weathering faded the paint to a dullish gray, revealing the wood grain underneath. The door knob—once a lush, shining brass—was dull and rusty after years of use.

She let her memories of that door, and all the love laying behind it, coalesce into waves of energy, pulsing outward, brushing aside the influence of the other members of Ansuz. Her soul was the tiniest fraction of the Veil belonging to her. She wouldn’t let others over-ride it.

A scream, containing every frequency a human being could hear or utter, filled the hall. The echoing
thud
of a door slamming cut off the noise, plunging the hall into an eery silence.

“What the hell was that?” Brandt asked.

A distant giggle drew Adrastia’s attention. The source, a little girl with black hair in pony tails, skipped from one side of the hall to the next. She never went through any doors, only appeared to fade in and out of existence from one side to the next.

“You’ll never save them,” someone said from the opposite direction.

The source was a phantom version of Adrastia. Blood stained its cheeks and the clothes it wore hung in tatters.

“You’re too weak to save anyone,” it said.

“What is it?” Brandt yelled at her. “Why the hell are you screaming?”

“Ignore it.” Adrastia felt their confidence unravelling. “Something is happening in the Veil. They’re just phantoms trying to drive you mad. Nothing they say is real.”

“But she knows things.” Tears filled Marie’s voice. “Only things Nat would know. It’s her I tell you.”

We have to get out of here.

Adrastia guided them toward a door. Any kind of world might lie beyond its threshold, but it was safer than staying in the Veil.

She didn’t dare loosen her grip on either of the Ansuz members. Instead, she directed her thoughts and desires toward the door,

Open. Let us through into a new world.

Instead of swinging open, the door creaked, bulged in the center, and exploded in a shower of splinters.

Adrastia tried telling herself the door wasn’t real—the explosion only her mind’s interpretation of… what? What was happening?

It didn’t matter. No amount of will could deny the shockwave slamming into her and the other members of Ansuz.

“Hold on,” she screamed.

They tried. But the force crushing against them was too much. Even Brandt, who gripped her hand so tight Adrastia thought it would shatter, eventually lost his grip.

She swallowed back sick, trying to fight against dizziness just to sit up.

“Don’t open your eyes,” she yelled, trying to keep her voice calm. “No matter what you hear, ignore it.”

A sharp stab in her left leg kept her on the ground. A six inch length of wood pierced her inner calf. She tasted blood, biting her lip to keep from yelling as she tore it out.

She searched the space for the others. Despite the impact, her mind reasoned they shouldn’t be too far away. But all sense of scale was lost. Initially, the hallway was immeasurably long, but only a thousand-or-so feet wide. Measurement no longer existed. There was no telling the dimensions of the place now—what seemed within reach skipped several feet away when approached.

Brandt, who’d hung onto her hand the longest, was closest—she hoped. But it was Wade who drew her attention.

The others were barely conscious—she couldn’t be sure they were even alive—but Wade was upright, on his knees, arms outstretched.

His eyes were wide open.

“It’s beautiful,” he said, tears streaming down his face. “I never knew. If you’d only told me sooner, I wouldn’t have been afraid to come.”

“Wade,” Adrastia screamed, “ignore it. Whatever you think is talking to you, it’s just an illusion. Focus on my voice, on me. Look at me Wade, just look at
me
.”

Something rose from the floor. It happened so fast, the details were lost to her. She only knew one moment Wade was there, the next, he’d been consumed and the space left empty.

She smacked her fist against the floor. Nearby, Brandt started groaning and moving. Adrastia threw herself toward him, grasping his arm.

“It’s me, Brandt,” she said. “I’ve got you. Just take a moment to get yourself together. But keep your eyes shut.”

“Where’s everyone else? What’s happening?”

I wish I knew.

After giving him a minute, though it was less than he needed, she dragged him to his feet.

She pulled Brandt behind her.

Caelum and Jackson being close was a lie. They were far, much further than she wanted. But they were still closer than Marie.

Jackson was curled in a ball, clutching his head. He seemed to be saying something, but she couldn’t hear him from this distance.

Caelum, on his knees, hunched over Jackson, seemed to be trying to talk him down.

She quickened her pace toward them.

“They’re all dying,” Jackson cried. “So many voices, so much pain. A trillion futures lost.”

Caelum gripped him by the shoulders. Despite Adrastia’s warnings, his eyes were open. Thankfully, he seemed intent only on Jackson.

“Hold it together, Jackson. We don’t know what’s happening. Adrastia said it could all just be an illusion.”

“No,” Jackson moaned, “you don’t get it. You can’t hear them. So many worlds destroyed. Futures that had already happened but will never happen again.”

Adrastia stopped, an icicle stabbing at her heart. Jackson wasn’t talking nonsense—though it was unlikely he even realized himself.

A number of doors exploded, the shockwave rolling over them like the tide breaking on the shore. She and Brandt collided against Caelum and Jackson. They lay huddled together for several minutes, clinging to each other like lifeboats in a raging sea.

Survival should’ve been her first priority—saving the others a close second. But Adrastia couldn’t help but dwell on Jackson’s words.

If that’s true, why am I even here?

The girl was still hundreds of feet away. The image of her faded in and out of view.

Adrastia pulled the others to their feet and dragged them behind her.

The Reluctant Detective (Faith Morgan Mysteries) by Ockley, Martha
Universe Hunters: Taken by C.L. Scholey
Miami Noir by Les Standiford
Crime City: Manchester's Victorian Underworld by O'Neill, Joseph
Anything He Wants 2: All's Fair by Sara Fawkes
Expelled by Emmy Laybourne
H.J. Gaudreau - Betrayal in the Louvre by H.J. Gaudreau
The Boy Who Wept Blood by Den Patrick
There Is No Otherwise by Ardin Lalui
The Gauntlet by Lindsay McKenna
Our partner