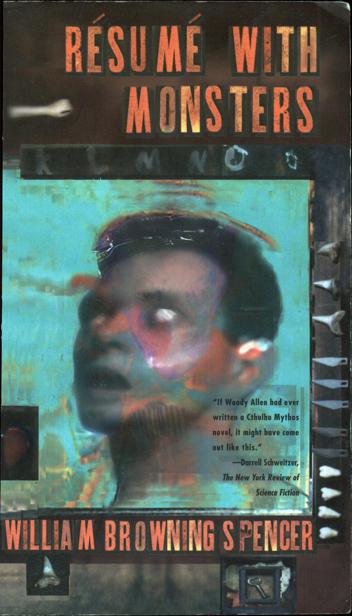 All rights reserved. This book may not be reproduced, in whole or in part, without the written permission of the publisher, except for the purpose of reviews.

This is a work of fiction. Any resemblance between characters herein and any persons, living or dead, is coincidental.

The mention tit or reference to any companies or products in these pages is not a challenge to the trademarks or copyrights concerned.

Because of the mature themes presented within, reader discretion is advised.

White Wolf is committed to reducing waste in publishing. Fur this reason, we do not permit our covers to be "stripped" for returns, but instead require that the whole book be returned, allowing us to resell it.

Borealis is an imprint of White Wolf Publishing.

Ralph’s One-Day Résumés was located in an industrial park that also housed insurance salesmen, auto mechanics, computer repairmen and a karate school. Philip
Kenan
accelerated to make the left into the parking lot, then braked hard to avoid losing his muffler on the huge speed bump that must have been a legend amid the local hordes of fire ants.

Philip parked, unbuckled the seat belt, exhaled.
Work
. It could be worse. It had been. This was safe harbor. So far, he had seen no signs of
Cthulhu
or
Yog-Sothoth
or his dread messenger,
Nyarlathotep
.

Philip waved to the receptionist, a pretty blond girl who was talking on the phone. He walked quickly down the hall and into the bathroom which, while cryptlike and dank, contained no hideous, disorienting graffiti from mad Alhazred's
Necronomicon
.

It was five in the evening, time for a middle- aged, lovesick, failed-novelist and near-obsolete typesetter to get to work. He just needed a minute to collect himself, to splash some water in his face, to check for nosebleeds, see that his eyes were in their sockets, see that no lichen grew on his forehead, that sort of thing. All was in order.
Sane as rain
.

He smiled at himself, a pathetic attempt at self-affirmation.
I will win Amelia back
, he thought.
We will put the bad times behind us.

He left the bathroom and walked on down the hall and into the break room where he punched his card in the time clock. The machine's worn ribbon produced a mark so faint that it could only be read by the ancient—and perhaps psychic—Mrs.
Figge
in payroll. Philip had actually seen her read the time cards by pressing them fiercely against her forehead and closing her eyes.

Philip left the break room and entered the long production room where the usual frenzy prevailed. A paste-up artist was sobbing while a secretary shrieked on one of the phone lines. A new printer, hired the previous week, was complaining that he had not been given a chance. Passing employees nodded their heads in perfunctory commiseration. The hard truth was, you had to fire a printer every now and then. Anyone in the business knew that long-term employment robbed a printer of his edge, and dispatching a printer invigorated those of his trade who remained.

The boss, an extremely thin, sharp-faced man named Ralph Pederson, rushed down an aisle where graphic artists labored over light tables and typesetters hunched over drab-green terminals. "Are you almost done? Finished? How's it going? An hour? What happened here? Shouldn't this be done?" He seemed, as always, to be in great pain, tortured by the money- consuming slowness that surrounded him. He waved at Philip and moved on.

Philip sat down at the terminal next to Monica, a stout, middle-aged woman with short- cropped brown hair who was the fastest typesetter in the whole world, perhaps, and who vibrated as she worked, her small feet bouncing on the dirty linoleum floor. Like all typesetters, she talked to herself in a loud, hearty voice. "If that's Avant Garde I'm a poodle!" she would exclaim. Or, "By golly, this isn't on file. I don't care what they say!"

Monica turned to Philip. "I had to set all that stuff you left last night. I've got my own work, you know. Let's get with the program, okay. We are production here, not design. This isn't some high fashion magazine where you can lay back in a barcalounger, sip some wine, and gossip about editors. This is slap-it down, out-the-door production, like it or leave it." Philip promised to improve. "You just got to get that speed up," Monica said. "I know you have only been here a couple of weeks; I understand that, but you gotta be aware, you know."

Monica and the rest of the production staff left an hour after Philip's arrival. He had the room to himself.

He grabbed another handful of business card orders and began to type.

Much of what he typed was banal. For some reason, hordes of old men wished to have business cards announcing that they were retired.
No Job No Money No Worries
these cards would announce. The purpose of such a business card was unclear. It was, however, a popular item, as were cards reading:
Hi, I haven't even met you but I've fallen in love with you and I am heartbroken because I don't even know your

The recipient of such a card was supposed to write her name and address on it.

Philip tried to imagine a woman being charmed by such a card, but the best Philip could do was conjure up a vision of a hardened hooker smiling gamely and saying, "That's funny. That's really funny."

And sometimes, amid the banality and insufferable self-advertisements, there were true and decent aspirations.

Résumés of the young, narrating honors seminars and obscure college awards and summer jobs, full of fine sentiments (
I wish to be of service to other humans and to work toward a cleaner and more healthful environment
) could bring a sudden hollow stillness to Philip's heart, as though a loved one had just fled his embrace, and Philip would hear himself whisper, "Be careful."

At ten, Philip called Amelia up from the phone in Mrs.
Figge's
office.

"I know that," Amelia said. Her voice still set his heart racing. It was such a wonderful, bell ¬like voice, although these days it contained a certain wary edge.

She had rationed him to one call a week, and this was it. She had been unhappy when he followed her to Austin, and she had refused to talk to him at first, letting her sister, Rita, take the calls. But she had relented under his persistence.

Philip had followed her to Austin from traffic- snarled Fairfax, Virginia, a suburb of Washington, D.C. They had both worked at MicroMeg, where they had met and fallen in love, and where, finally, the ancient, implacable curse that his father had called the System or sometimes,
Yog-Sothoth
or simply the Great Old Ones, had torn them asunder. He was here now to win her back, and he knew he had to proceed with caution. So far he had only spoken to her on the phone, although he had seen her a number of times. He had spied on her; he had crouched low in his car in the shade of live oaks down the street from the house where she was staying with her sister.

He would watch her come out of the house in the morning, get into her car and drive off. So far he had resisted the urge to race up to her, to enfold her in his arms. He didn't want to send her running again. He might lose her forever in the vastness of America.

Amelia, traumatized into blind denial by the doom that came to MicroMeg, refused to acknowledge that the Old Ones even existed, preferred to think that her lover had lost his reason; preferred to flee him rather than confront the truth, as though such flight could negate the dreadful, ghastly facts, the irrefutable history that she and Philip shared.

"You can't deny what happened!" he had shouted.

Oh, but she could.

She loved him, still. Philip could hear that love in her voice, beneath all the careful reserve and skirted subjects.

Philip kept the phone conversation casual, asked how her job search was going.

"Not good," Amelia said. Austin was a city with a large college population. Employers could hire from this student population. There were also a substantial number of people who had gone to the University of Texas for as long as possible, accrued as many degrees as parental funds and grants permitted, and now waited tables, clerked in government positions, or sat in the rental offices of apartment complexes—anything rather than return to, say, El Paso.

And who would want to leave? Austin was lovely, a laid-back town, the last refuge for hordes of aging hippies who drifted up and down the Drag, gray-bearded artifacts who knew all the lyrics to old Leonard Cohen songs and could talk knowledgeably about astral planes and karma.

“I can't find anything," Amelia complained.

"You will," Philip said. "It just takes a few days sometimes, and you want to be careful anyway. You want to see that there aren't any signs of—" "Philip."

Philip stopped abruptly. Easy. "I just mean you don't have to grab the first job you are offered."

And you want to look in the bathrooms and see what is written there on the walls, and take a peek in the furnace room, and perhaps, quite casually, stick a good-sized pin in a long-term employee and see if she howls.

"I don't feel right about staying here with Rita too long," Amelia said. "She doesn't complain or anything, but I know I'm in the way."

"You could come and live with me," Philip said.

Silence. Philip's heart crawled out of his chest and jumped up and down on the desk: Boom
boom
boom
.

"Are you still writing that novel?" she asked.

His heart climbed back into his chest and lay down, curled on its side, defeated. Why lie? He couldn't fool her. "Yes. Sure."

"Philip, I can't live with you. Look, Rita is expecting a call. I'll talk to you next week, okay?"

He went back to his computer and began typing again. The phone call hadn't been a bad one, really. She hadn't said never to call again. She had said, "I'll talk to you next week, okay?

That was certainly positive. She seemed to have accepted his presence; she wasn't sending him away or running again.

He lay in bed that night and thought, "I'll win her back." In the meantime, of course, he would have to hang on to his own reason; he would have to be ever-vigilant. Once you have gazed on the baleful visage of
Yog-Sothoth
, your own thoughts are forever suspect.

The Beast by Jaden Wilkes
The Queen of Cool by Cecil Castellucci
Darkest Before Dawn by Stevie J. Cole
Loved by the Billionaire: A Torrid, Romantic BWWM Story by Eve Brown
The Bone House by Stephen R. Lawhead
Volcrian's Hunt (The Cat's Eye Chronicles) by Shreffler, T. L.
Diary of the Fall by Michel Laub
204 Rosewood Lane by Debbie Macomber
La búsqueda del Jedi by Kevin J. Anderson
Figure it Out For Yourself by James Hadley Chase
Our partner