Read Retief and the PanGalactic Pageant of Pulchritude Online

Retief and the PanGalactic Pageant of Pulchritude 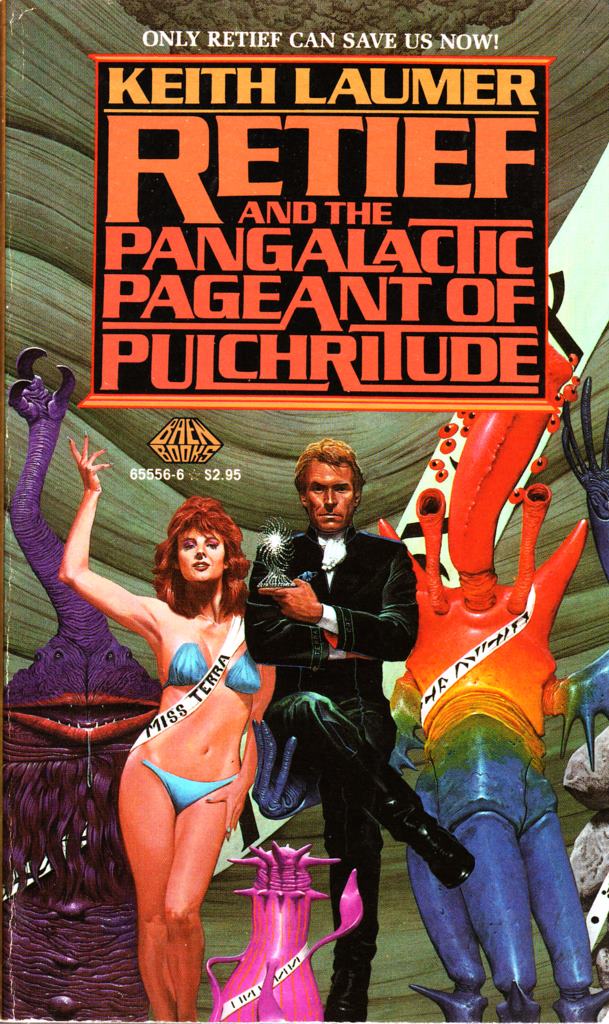 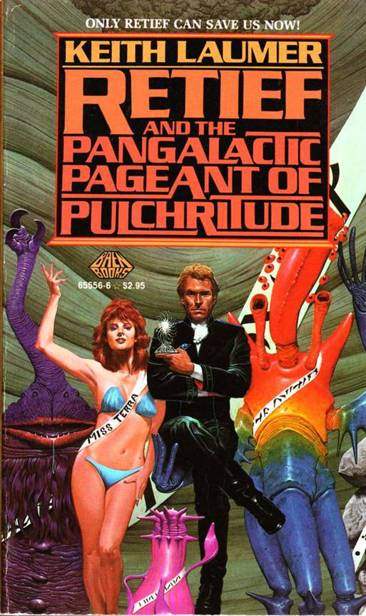 "Is
it true," a spindly blue crustacoid from Haik Thirteen demanded,
"that your Terry females outweigh their mates three to one, and devour the
males immediately after mating?"

"An
exaggeration," replied the Terran Director of Public Relations soothingly.

"But
what about this rumor that Terran females are capable of driving you helpless
males right around the bend, merely with a single glance?"

"Yeah,
how about it?" reiterated a small, cootie-like wire rep from the Goober
Cluster. Others joined in the clamor until the PR man raised both hands in a
placating gesture.

"One
or two at a time,
please!"
he chided. "I mustn't be quoted
directly, now, but I think I can give you a specific 'perhaps' on that one.
That's all for today, chaps."

This is a work of fiction. All the characters and
events portrayed in this book are fictional, and any resemblance to real people
or incidents is purely coincidental.

All rights reserved, including the right to reproduce
this book or portions thereof in any form.

Part of this book has appeared previously as
"Retief's Ransom," © 1971 by Keith Laumer.

BOOK ONE:  RETIEF AND THE PAN-GALACTIC PAGEANT OF
PULCHRITUDE

BOOK ONE:  RETIEF AND THE
PAN-GALACTIC PAGEANT OF PULCHRITUDE

"Retief!"
Magnan wailed from his perch on a ledge in the cave wall. "I'm
s-s-scared!"

"Certainly,
Mr. Magnan," Retief replied from his seat on a boulder. "You'd be a
damn fool if you weren't."

"DO
something, quick!" Magnan urged. "Nothing rash, of course. Why,
if you were killed, I'd be here all alone with
that."

"With that thought in mind, how can I
fail?" Retief said.

"Gracious,"
Magnan lamented. "How did an inoffensive diplomat like myself come to find
himself, er, myself, that is, in such a situation?"

"Since
I was stuck with the detail as Project Officer," Retief pointed out,
"I made it my business to know what was happening."

"If
you had carried on in strict accordance with regulations, your paperwork would
have kept you too fully occupied to bother with details like personal ... ah
... intervention," Magnan rebuked mildly. "But then, of course that
was too much to expect." Magnan broke off to eye the monstrous quadruped
which paced the floor below, pausing occasionally to yawn mightily, exposing
impressive yellow fangs.

"Somehow,
Retief," Magnan said sadly, "I can't help feeling you know more about
that ferocious creature than is appropriate for a sound diplomat to know."

"Then
tell me: what in the cosmos
is
it? The Post report didn't say anything
about a great big diplomat-chasing animal here on Glorb XIV, with big sharp
hooks on all its feet and all those awful pointy things in its mouth. It looks
almost like a picture I saw once of an extinct Terran beast called a tiggle, or
something like that. Somehow those dreadful black and yellow stripes make it
look even more sinister."

"Good
thinking, Mr. Magnan," Retief said. Magnan yelped as the big cat reared
suddenly, placing its forepaws against the wall only inches below the terrified
bureaucrat's feet, stretching its neck to sniff the scuffed toes of his
bright-polished boots (issue, top three grades, for the use of on informal
occasions).

"Retief!"
Magnan shrilled. "It's about to eat me!" He tried in vain to climb
higher up the vertical wall. "Well, tell mother I died game," he
requested quietly, while the feline dropped back to all fours and used a hind
leg to scratch behind its small, round ear.

"Imagine!"
Magnan said in a stricken tone. "A loyal bureaucrat devoured by an extinct
prehistoric monster!"

"Except
that it's not
quite
extinct," Retief pointed out.
"Panthera
Tigris,
commonly known as the Royal Bengal Tiger. One specimen was
preserved at the Berlin Zoo, you may recall."

"Yes,
I once saw a special on vanishing life-forms," Magnan almost babbled,
gazing down in horrified fascination at the huge feline as it approached once
again. "Pity, in a way, I suppose," he went on gamely. "A
healthy female, and no male extant to father a brood. Though why anyone would
want to perpetuate
that
horrid, bitey carnivore, I can't imagine."
Magnan paused to chew his lip. "It's the same group that carried out the
'Save Our Anopheles' campaign last year, I imagine," he concluded.

"Why
so hostile, Mr. Magnan?" Retief inquired coolly. "After all, she
hasn't even nibbled you yet."

"Thanks
entirely to my agility," Magnan snapped. "I was
so
enjoying
our stroll in this alien landscape, until
it
came along. It seemed so
reasonable to take refuge here—but now it's clear this is strictly a two-man or
one-tiggle cave. And I thought we were so cleverly concealed. How did it find
us so quickly? ESP?"

"She
trails by scent," Retief explained. "She can smell us, Mr. Magnan,
even smell the spots on bare stone where we stepped."

"Retief!
Are you deliberately trying to be offensive?" Magnan scolded. "Why, I
assure you I took my sono as usual this morning."

"She
has a very sensitive smeller," Retief said. "And of course she's
extra-keen, since after she stepped out of her cage she's been on her own all
day here on Boondock—"

"Retief!"
Magnan cut in severely. "The official designation of this world is, as you
well know, Glorb. That offensive nickname is hardly proper terminology for a
diplomat accredited to the planetary government."

"Glorb
or Boondock," Retief pointed out, "there's nothing here for Gertie to
eat. She missed her usual morning feeding, and we represent the only edible
food for her within several dozen lights— unless you want to count the boys
back at the ship, or the staff at the Embassy over at Furtheron; and even
Gertrude can't smell that far."

"Sure
I did. Why not?" Retief replied affably. "I had my instructions: to
go over the list of finalists and select the most beautiful female native to
Terra. And I picked Gertrude."

"But
that wasn't.... I mean, yours was to be a purely rubber-stamp function. You
were supposed— after all, Ambassador Grossblunder thought...."

"I
can't argue with that," Retief admitted.

"You
... you deliberately tricked me. I mean you let me think—"

"Mr.
Magnan, be calm," Retief urged. "When you offered to serve as
chaperone for our candidate, I hinted to you that Miss Gertrude was something
of a spitfire."

"Indeed
you did. Those casual remarks of yours about her uninhibited behavior during
those long tropic nights, and how she loved to be petted to help her get to
sleep, and always enjoyed having her back scratched in the bathtub—why, that
was all calculated to lead me on to folly!"

"You
assured me you were motivated solely by your dedication to bureaucratic
method," Retief reminded his senior.

"Bureaucratic
method, indeed!" Magnan snorted. "When word reaches Ambassador
Grossblunder that his protégé, that little Peaches Ripetree, I think her name
is, is to be left out, while we transported this ravenous beast all the way
here to Boondock, as Terra's entry in the P.PJP., why, I dread to contemplate
his wrath."

"In
that case, Mr. Magnan," Retief soothed. "I suggest you think about
something else." As Gertrude reached the far end of her pacing pattern,
Retief stepped quietly down to the cave floor. The big cat, near the entrance
to the twelve-foot cave, turned quickly to face him.

"Retief,"
Magnan said coldly, drawing in his feet even further as the carnivore strolled
back across the cave floor and wrinkled its nose at Retief, who scratched her
behind the ears, eliciting a distinct, though
basso
purr. "Retief,
how is it the tiggle isn't eating you? Surely you're as edible as I?"

"I
took the precaution of making friends with her during the trip out,"
Retief said. "If you'll come down, maybe you can do the same."

"I
rather think not," Magnan said. As he shifted position, Gertrude glanced
up at him and growled, a sound like a gallon of ball bearings spilling on a
hardwood floor. Magnan edged aside hurriedly, hugging the rock and watching the
cat's lazy movements as it stretched, its claws scraping the stone floor with a
sound like chalk squeaking on a blackboard.