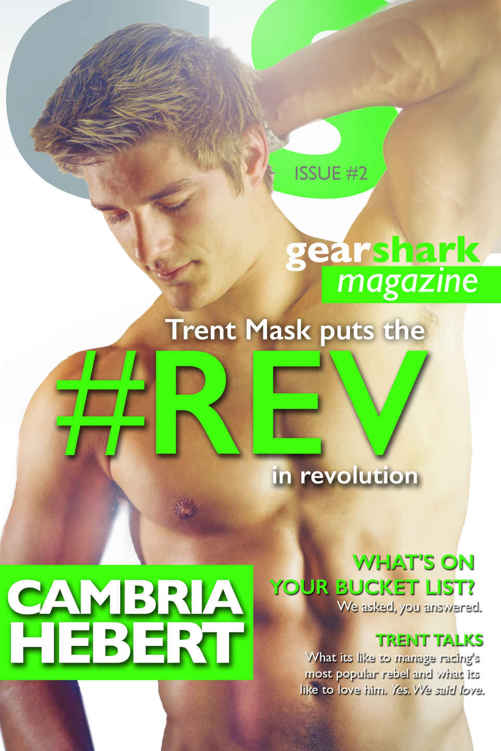 A line has been drawn.

Here at GearShark, we’re straddling that line to bring you exclusive coverage of what some have dubbed the war of racing.

Every war starts with a spark and ends in revolution.

Drew Forrester was the spark,

but his second-in-command is the REVolution.

What does it take to stand brave in the face of opposition?

And a heart that refuses to give up.

It isn’t just the drivers in this war.

The revolution is about more than just racing.

So we asked Trent Mask: Truth or Dare?

Check out the full feature article inside…

All rights reserved, including the right to reproduce this book, or portions thereof, in any form without written permission except for the use of brief quotations embodied in critical articles and reviews.

Cover design by MAE I DESIGN

This is a work of fiction. Names, characters, places, and incidents either are the product of the author’s imagination or are used fictitiously, and any resemblance to actual persons, living or dead,

“A revolution is a struggle to the death

between the future and the past.”

I was no quitter.

I refused to quit Trent.

So angry
. I was so goddamned angry.

He was pushing me away when all I wanted to do was pull him close. It was almost laughable he tried to break up with me. I felt the laughter bubbling up inside me, ready to explode. It was like I was so incredibly infuriated I couldn’t yell… I couldn’t cry… I couldn’t even speak.

But I wanted to laugh. The kind of laugh only villains in movies did. The kind that bespoke of internal madness.

That’s what tonight was. Madness.

He was jumped. Beaten.

He told me he loved me.

Then he laid out intent to withhold that love.

Trent was trying to protect me. In his mind, he wasn’t keeping the love he felt from me, but rather showing it in the best way he knew how. I respected that. I did.

But I wouldn’t have it.

We’d gotten one week together. I wanted more.

I suppose thinking we could keep our relationship a secret was naive. Merely wishful thinking. When you loved someone the way we loved each other, it was impossible to hide.

It showed in every way.

Not just in the way we looked at each other. Or the way we spent every spare moment together. It showed in ways I never wanted to see until now. Ways I thought no one else would notice.

I’d been fooling myself.

It was the way he put ketchup on his plate so I could eat his fries. The way I automatically pulled the tomatoes off my burgers and slid them onto his plate. It was the fact that I went to him first whenever something happened I wanted to share. And the way we made each other’s coffee exactly as we drank it.

Love is in the details. It’s in the everyday. It’s the way you treat someone when they aren’t even looking and the way they fill your head when you’re apart.

Of course people were going to see it.

Joey saw it almost from day one. Braeden and Ivy already knew. The reporter from
GearShark
knew from just one conversation…

Hiding our relationship was almost not an option.

Dissolving it wasn’t either.

My hand throbbed and my knuckles were slick with blood when I slammed out of the room. I was so intensely frustrated I couldn’t look at him another minute.

We weren’t over. No way in hell.

But I needed a minute.

My mind was so clouded with anger I didn’t see him. I didn’t notice him at all until he cleared his throat. My body jerked to a stop and my head whipped around to see Romeo leaning against the wall as if he were resolved to be there a while.

I was sure he heard everything.

Trent and I had been yelling. And the sound of my hand going through the wall hadn’t exactly been silent.

“Guess I don’t need to ask how he is,” Romeo said, straightening off the wall.

“You agree with him?” I challenged, my hand flexing. It was already fucked up from going through a wall, but I’d use it again if I had to.

“I understand why he thinks he’s doing what’s right.”

At first, his words didn’t sink in. They just pissed me off even more. All I heard was Romeo understood Trent. I growled low and stepped forward in an aggressive movement.

Romeo’s eyes narrowed, watching me close, but other than that, his body language didn’t change.

“We’re in a relationship,” I said point blank. I kind of wanted to shock him. I wanted someone other than me to feel the sting of words tonight.

I also wanted a fight.

Just not with Trent.

“I know.” The amusement in his tone took a little heat out of my oven. “You can’t keep secrets like that from family. Family who really loves you.”

“You should probably get that hand cleaned up. You’re bleeding on the floor.”

I glanced down at the blood dripping off my knuckles.

Romeo stepped off the wall and toward the bedroom door. I moved fast, silently snatching his arm and turning him around. He didn’t pull away or act like my roughness was a threat, but his muscles tensed beneath my arm, and I felt tension coil in his limbs.

“He cares what you think,” I said quietly. “Your opinion matters. So if you aren’t sure how you feel about our relationship or the fact there are two gay guys in your family, walk away. Walk away right now.”

Romeo stared at me level, his blue eyes bouncing between mine.

“He’s already fucked up enough right now. If you can’t offer him the brother he needs tonight, I won’t let you in that room.”

Romeo’s lips curved up into a knowing, almost pleased expression. “He pissed you off so bad you put your hand through a wall and he’s pushing you away, yet here you are, standing guard at the door, protecting him.”

“That wasn’t an answer,” I growled.

Romeo laughed beneath his breath. And then he answered.

In seconds, his arm was out of my grasp and he was hugging me. I hesitated, shocked he would just reach out and embrace me like this.

“Family takes care of family.” His voice was muted. “I’m not sure if there’s anything that could make me turn my back on family, but if there is, it ain’t this.”

When he pulled back, I looked him in the eye.

“Congratulations on finding a love worth fighting for.”

I wasn’t expecting this. It wasn’t that I thought he wouldn’t accept us, that any of this family wouldn’t. It was the way they did it. The way they acted like it wasn’t even anything to bat an eye at, like Trent and I were inevitable and they’d only been waiting for us to figure it out.

I wished it were that easy for me. For Trent.

“I thought the fighting was over,” I said, suddenly incredibly weary. “But it’s only just begun.”

“You aren’t alone.” Romeo slapped me on the shoulder. “I’m going in now.”

I nodded, knowing Trent was going to get the support he needed. I started down the hall. This time it was Romeo who stopped me.

“I know you’re going to go after them,” he said.

When I glanced back, he was right behind me, and his voice was quiet.

“Oh, yes,” I intoned. “There’s no way in hell I’ll let what they did to him go unpunished.”

I nodded. I wasn’t sure what I was going to do yet, but I wasn’t going to turn down help. The more painful the revenge, the better.

And if worse came to worse…

I’d have someone to bail me out of jail.

The Red Leopards of Zaxon B (Galaxies Collide Book 2) by McGregor, Andrew
Territory by Bliler, Susan
Orwell's Luck by Richard W. Jennings
Heart's Reflection by P R Mason
A Parent's Guide for Suicidal and Depressed Teens by Kate Williams
Quarterback Bait by Celia Loren
The Future Is Short by Anthology
Shadows in the Silence by Courtney Allison Moulton
Reserved for the Cat by Mercedes Lackey
One Night with her Bodyguard by Noelle Adams
Our partner