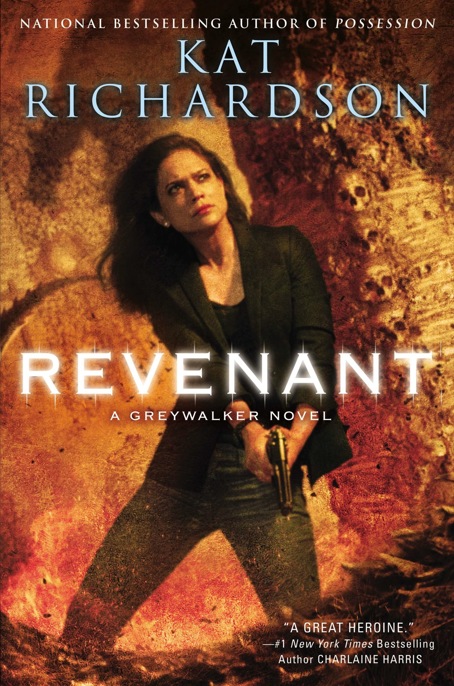 This one is for my fans and minions, especially Thea and Eric Maya—Thing One and Thing Two—with many thanks.

I’d like to thank some people for being awfully good sports: Maggie Griffin; Robin (R. K.) McPherson for notes about Black Ops and bones; the brothers Bara and my first agent, Steve Mancino, for being much nicer than their namesakes here. Colleen Lindsay and Dana Kaye for introducing me to Maggie. Jane Haddam (Orania Papazoglou) for letting me pick her brain about Portugal and the Capela dos Ossos in Évora. Liz Argall as well as trusty friends Elisabeth Shipman and Nancy Durham for beta reading. Laura Anne Gilman, Barbara Ferrer, and Monica Valentinelli for being indefatigable cheerleaders and ass kickers. Wonder agent Sally Harding and the crew at the Cooke Agency. Anne Sowards and the team at Roc—you make me look good! The enormously talented Chris McGrath for the best cover ever! And chief minions Thea and Eric Maya for going through every single volume of the Greywalker saga to find the continuity errors.

Last, but never least, my husband for putting up with me and taking up the slack while I was busy writing this book. I love
you.

D
eath doesn’t frighten me. We are old friends by now. But just knowing death doesn’t mean I seek it. Some people do. Some even reside there, but that’s not for me. For me, it’s an occupational hazard. I’m a Greywalker. I dance along the high wire between the realms of the living and the dead, in the strange intersection called “the Grey,” where ghosts dwell and monsters are real and the fire of magic sings in hot lines of power, gleaming like neon in rain-slicked night that continues all the way to the bottom of the well of the world.

But that’s not what my business card says—
HAVE GHOST; WILL TRAVEL
. No, mine just reads
HARPER BLAINE, PRIVATE INVESTIGATOR
. I wanted that job and I worked to get it. The other . . . That just happened one day when an angry man beat my head in. It would have happened anyway; he just accelerated the process. I’ve died and come back three times and each brings me closer to the last, and each time I wake changed. I have no control over it—it just is. I suspect that my next tango with death will be my last.

So I work for ghosts and monsters and sometimes for the people I love. And that’s where things get weird. Because a little more than a year ago I wouldn’t have expected my lover to leave me within the next six months to pursue his father across Europe, and I wouldn’t have expected to get a mysterious message in another eight months summoning me to join him, or that I would bring a vampire along with me when I did.

I
woke in a coffin and knew the rat had died. I’m not normally claustrophobic, but for a moment I hyperventilated and lay there, sweating and quietly freaking out, while wishing I were just in a low-budget horror film rather than in the cargo hold of a transatlantic jet, resting in a cleverly ventilated box with a label on the outside in six languages that read
CAUTION: HUMAN REMAINS. HANDLE WITH CARE
.

I had no way to know how long I’d been in the box, but I thought it couldn’t have been more than a day since I’d received a code-phrase message from my boyfriend, Quinton, summoning me to Europe. There’d been very little information except that he needed me in Lisbon as soon as possible and I was to come without leaving any sign that I was gone or alerting anyone keeping tabs on me that I was exiting the country. I knew from discussions starting a year earlier that it had to appear that I was still in my usual place for as long as possible. Whatever it was Quinton wanted, it involved his father, James McHenry Purlis—spy, manipulator, and all-around villain.

Since I was in a bind, I’d turned to the local vampires for help. They seemed to get around without much harassment from TSA or border patrols, and they owed me a few favors. And there was the matter of Carlos, both vampire and necromancer, who had a personal interest in breaking down Purlis and his mysterious project. If anyone was capable of making me disappear without a trace and reappear elsewhere, it would be him. I’d left messages for him explaining the situation, made discreet arrangements on my own end, and had agreed to meet him. . . .

The location in question was a funeral home. As I walked in through the doors labeled with a tasteful sign—
BARRON VIEWING, 7–9 P.M.
—it occurred to me that I’d come to trust Seattle’s vampires. It had been a slow change and an uncomfortable one, but when I was in a corner, it was most often Cameron and Carlos to whom I turned for help now—a far cry from the relationship I’d had with them when I’d first fallen into the Grey. The situation had changed a lot since I’d met my first vampire, but more than that, I had changed. I wasn’t the frightened and defensive loner I had been.

I passed the immaculately dressed funeral director, who stood near an interior door and gave me an inquiring look. I shook my head and murmured, “I have an appointment with Silverstein.” He nodded and pointed toward a curtained doorway at the end of the hall. As I passed the open doorway he guarded, I saw that the viewing room was empty. A sad state of affairs for a funeral director: all dressed in black and no one to console.

I gave him a small smile. “I’m sure someone will come soon.”

“I doubt it,” he replied in a professional, funereal hush. “The man was a child molester. Someone shot him . . . in an appropriate location. I won’t mind if no one comes.”

He offered me a thin smile. “Thank you.” He folded his hands in front of his belt and returned to waiting for no one.

I went to the curtained door and opened it to discover a stair landing and a flight of steps leading down. The walls were a sterile, glossy white that reflected the light from the fixtures on the walls as well as from the room below. I’d been in mortuaries before and the chill and odor told me I was walking down to the prep room—where the dead were made presentable for their grieving families and friends. I was more sure than ever that I wasn’t going to like Carlos’s transportation methods.

Carlos stood between the embalming tables. A plump, older woman in a black suit stood several feet away, near a cabinet. The woman somehow seemed to fade into the background even in the glare of the lights, but Carlos was indelible. I’d never seen him in a room so well lit. The work lights shining off the high-gloss white walls and poured-cement floor cast illumination into every corner and crevice of the room and every crag of his face. His hair and beard looked blacker than ever as the light bleached color from his skin and chased away the perpetual shadow under his brow. I was shocked to realize that he hadn’t been in his forties when he’d died—as I’d long assumed—but in his late twenties or early thirties at the most. I blinked at him, momentarily stunned as I reevaluated what I’d always believed about this particular vampire.

The Guilty by Juan Villoro
Pinch of Naughty by Sivad, Gem
Touch of Amber: Hot Rods, Book 7 by Jayne Rylon
Mulliner Nights by P.G. Wodehouse
Don't Label Me! by Arwen Jayne
The One Who Got Away (An Alpha Billionaire Romance) by Ava Claire
His Obsession by Lore, Ava
A Summer To Remember (Seasons of Love & Lust Book 1) by Selene Chardou
Electric by Stokes, Tawny
Fundación y Tierra by Isaac Asimov
Our partner