Read Revolution in Time (Out of Time #10) Online 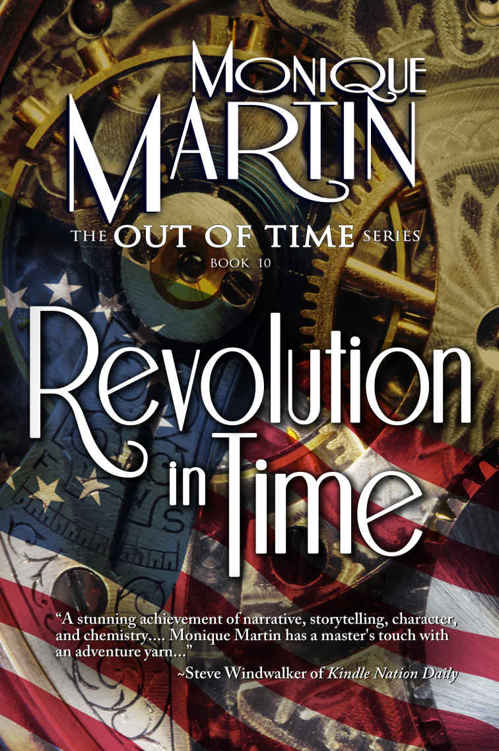 Other Books & About the Author

A sudden change in Council leadership puts not only the Crosses but the timeline itself at risk. The new Council no longer wants to protect time, they want to reshape it -- starting with the birth of America during the Revolutionary War. However, that isn't the only birth they plan on stopping. For their ultimate plan to work, Charlotte Cross must never be born.

Friends old and new join forces to save Elizabeth and Charlotte and keep the world they know from being erased from history.

This book is a work of fiction. Names, characters, places and incidents either are the product of the author's imagination or are used fictitiously. Any resemblance to actual persons, living or dead, is entirely coincidental.

All rights reserved. No part of this publication may be reproduced or transmitted in any form or by any means, electronic or mechanical, without written permission.

As always this book would not have been possible without the help of many people. I would like to thank Michael, Eddie & Carole, Mom & George, Dad & Anne, Cidney, Melissa, Cynthia, Laura, DeAnn, and most of all, Robin.

I’d also like to thank the thousands of people who help preserve the past through books, websites, museums and sheer will.

Professor Simon Cross and his assistant, Elizabeth West, discover one of Simon’s family heirlooms is more than just an antique pocket watch, it’s a time traveling device. Simon’s grandfather was a member of the Council for Temporal Studies, an organization dedicated to observing and preserving the timeline.

Through surviving an accidental trip into the past, Simon and Elizabeth find their attraction to each other is something much deeper, a true and abiding love. A forty-year-old British Professor of the Occult and twenty-five-year-old graduate assistant from Texas seem an unlikely match, but opposites really do attract.

Now a couple, they join forces with the Council and are sent on missions to fix the timeline by Council Director Peter Travers. They’re aided by a special watch key created for them by the watchmaker himself, Teddy Fiske, a brilliant but eccentric scientist from the early 1900s. Now, with the key, they’re able to time travel without restriction, unlike other Council operatives who are limited to traveling only during an eclipse.

Simon and Elizabeth, along with other Council agents, are sent on missions to repair or prevent changes in the timeline. Whether it’s solving a murder before it happens or saving Jack the Ripper, Simon and Elizabeth dedicate themselves to keeping history intact. There are those, however, who would like to rewrite the past and will stop at nothing to get what they want, and the cost of keeping history safe grows at every turn.

Finally, after crossing the Atlantic, surviving the sinking of the
Titanic
, and driving to some unknown house in upstate New York, they were here. Wherever here was. Simon and Elizabeth Cross still had no idea who Niels Bohr, the brilliant physicist, was meeting.

When they’d been sent back in time to keep him safe, they had no idea he would even come to America, must less on the
Titanic
, for his mysterious meeting. After all they’d been through making sure he survived long enough to get here, they were anxious to find out just who it was so important for him to meet.

They all stood at the doorstep of a Victorian mansion. Simon cleared his throat, urging Niels to ring the bell. He did and they waited.

A few moments later, the enormous door swung open and Elizabeth gasped out loud. A small man in his mid-thirties with a neatly trimmed beard and a face Elizabeth would know anywhere looked back at them, completely unsurprised to see them.

He grinned and held out a small, brown paper sack.

Elizabeth was speechless. She had no idea who she’d expected to see open the door, but it definitely wasn’t Teddy Fiske. They hadn’t seen him since they saved Evan Eldridge and brought him home to 1906 San Francisco. That meant it had been six years for Teddy, but he didn’t seem to have changed at all. He smiled back at her with that same guileless expression he always wore and her heart stuttered at the sight.

Niels glanced between them. “You know each other?”

“We met some years ago,” Simon said. “In San Francisco.”

Elizabeth heard the slight edge in Simon’s voice. He was as surprised as she was, but his surprise always came with a side order of suspicion. She was too happy to see her friend to bother with the questions that were inevitably to come. He’d been a dear friend when she so desperately needed one and was never far from her thoughts.

Teddy smiled brightly at her and then blinked away some emotion.

“I’ve missed you,” he said, his soft voice wavering a little.

Elizabeth pulled him into a hug. “I missed you, too.”

She eased back and Teddy blushed, looking down to avoid her eyes. He’d always had a crush on her, and things apparently hadn’t changed on that front.

She squeezed his arms and let him go. He glanced up at her shyly.

“We both did,” Elizabeth added quickly, gesturing to Simon whose expression was hard.

“What the devil are you doing here?” Simon demanded with his classic British impatience.

Elizabeth turned to look at her husband. The answers he wanted would come. Probably. The last thing they needed was to scare poor Teddy. “Simon—”

Simon opened his mouth to say something else, but he closed it and huffed out a deep breath.

“It is a small world, it seems,” Niels said.

Simon nodded but Elizabeth could tell he was unnerved by the surprise of seeing Teddy, and doubly so because Teddy didn’t seem surprised at all. Although with Teddy it was difficult to tell sometimes.

Teddy grinned excitedly at Niels and then bowed. “Mr. Bohr.”

They all stood there on the porch for a moment before Niels gestured toward the inside of the house. “Perhaps we could …?”

“Oh, yes.” Teddy stepped aside to let Bohr in. Simon shot Elizabeth a concerned glance and then followed.

Elizabeth smiled reassuringly at Teddy and let Niels and Simon get a little ahead of them. She looped her arm through his. “Is everything all right?”

He smiled again, but there was a tinge of worry in his eyes. “It will be.”

A heavyset maid in her late fifties stood in the hallway. She wiped her hands on her apron.

Teddy gestured haltingly toward a doorway off the entrance hall. He was clearly not used to having company.

Niels took out his handkerchief and coughed into it. “Thank you, but I am a little fatigued. Perhaps I will rest until dinner. If that is all right?”

He looked as wrung out as they all felt. The night of the
Titanic’s
sinking had taken its toll on him as well as Simon. He’d been fighting a cold ever since.

Teddy nodded, but just stood there as Niels waited for a response.

Mrs. Dunlop provided it. She frowned and shook her head. “Like he was raised in a barn. I’ll show you to your room, Mr. Bohr.”

She started for the stairs and pointed her finger at Simon and Elizabeth as she passed and addressed Teddy. “See to your guests.”

Teddy giggled to himself.

Niels gave Simon and Elizabeth an apologetic look and followed the housekeeper up the stairs.

Teddy looked anxiously at Simon, who was tired and stone-faced and then led them to the parlor.

There were two pots of tea and four cups. He’d definitely been expecting someone to be with Niels. Elizabeth saw Simon’s eyes narrow as he noticed it.

Teddy walked over to the small tea table. “The one on the left with the little birds, they’re supposed to be robins. I think they look more like thrushes, don’t you?”

He glanced up at Simon, who was growing more impatient with every passing second.

Teddy swallowed nervously. “That one’s for you.”

“You prefer Chinese Gunpowder, don’t you?”

“Yes,” Simon said with a glance at Elizabeth. This tea was obviously set out for them specifically. He’d known they were coming.

“I have to say,” Simon said as he squared his shoulders, “I’m not in the mood for tea at the moment.”

“Moxie? It gives me gas, but other people like it.”

Teddy’s disappointment was overtaken by an anxious look, but he nodded and walked to the sofa. He looked at Elizabeth, who realized he was waiting for her to sit before he did. She maneuvered herself to a chair opposite the sofa and sat down. Simon remained standing.

“You were expecting us,” Simon said. “How is that possible?”

Teddy rubbed his index finger back and forth along the arm of this chair. “Someone told me.”

Simon sighed, his frustration growing with his fatigue. Elizabeth stepped in.

“How can you not know?” Simon asked tersely.

His response was genuine, at least Elizabeth thought so, but Simon was in no mood for twenty questions.

“Did you know about our mission? Did you arrange it?”

“You wanted us to come here?” she asked.

Teddy nodded but then shook his head quickly. “I wanted to see you, but I didn’t ask for you to be assigned to this.” He frowned then. “At least I don’t think I did.”

Simon grunted and Elizabeth could tell he was having trouble reining in his anger now.

Teddy tugged on his earlobe and glanced nervously up at Simon, who towered over the much smaller man.

“Simon,” Elizabeth said, doing whatever she could at this point to keep Simon from exploding and Teddy from imploding. “Why don’t you sit down?”

He looked ready to argue the point, but instead rolled his shoulders and took the chair next to hers.

Although their missions were always dangerous, this last one had left Simon raw. He had no love lost for the Council at the best of times. They’d betrayed his trust and he still blamed them for his grandfather’s death.

Without someone else there to vent his anger upon, Teddy had become an unwitting target.

With a visible effort, Simon tried to calm his voice. “Elizabeth and I, not to mention Niels, went through hell to get here.”

Teddy fidgeted and looked down at the carpet. “I know. I’m sorry. I didn’t want that. You’re my friends.”

“We are,” Elizabeth said.

“I knew you were assigned by the Council to make sure Mr. Bohr arrived safely. And you did,” he added with a smile.

“Yes, but how exactly did you know that?” Simon demanded.

Teddy started to answer, but Simon interrupted him.

“Because I’m part of the mission, too.”

Simon glanced over at Elizabeth.

Teddy nodded. “I’m supposed to nudge Mr. Bohr in the right direction. Somehow things have been changed.” He looked at Elizabeth, but he was talking to both of them. “What do you know about quantum mechanics?”