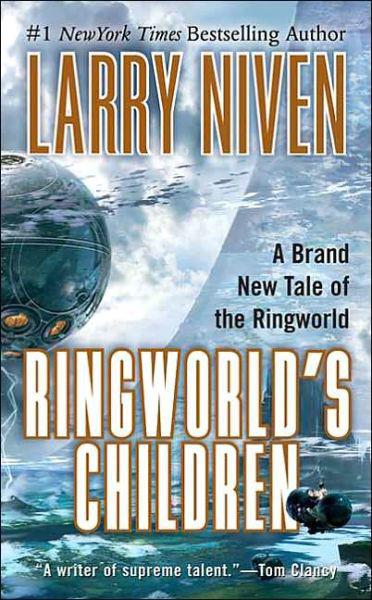 Larry Niven
Ringworld's Children
This is for the firemen of California and neighboring states who fought the fires of October 2003, with particular thanks to those who saved our house and others in Indian Falls, Chatsworth, Los Angeles County.

PREFACE
The Ringworld is about the same mass as Jupiter. Its shape is that of a ribbon a million miles across and six hundred million miles long, which makes it a bit larger than the Earth's orbit, and a few miles thick. It circles a yellow dwarf star. Its spin, at 770 miles/second, is enough to give it about Earth's gravity of centrifugal force. Walls along both rims, standing a thousand miles high, are enough to hold an atmosphere for millions of years.
Much else derives from these basic assumptions.
The inner surface is a habitat three million times the area of planet Earth. The topography is literally a work of art, carved in by whoever built the thing, so that from underneath the Ringworld resembles the back of a mask.
An inner ring of shadow squares block the sun, giving periods of night; else it would always be noon. A system of pipes leads from the bottoms of oceans, under the Ringworld floor, up the back of the rim wall and over the edge, to recycle seabottom ooze (or
flup)
into spill mountains. Huge attitude jets stand atop the rim wall, Bussard ramjets using the solar wind of protons for their fuel, to hold the Ringworld against its inherent instability. There are spaceport ledges outside the walls. Two vast salt oceans serve as preserves for seagoing life, and as something more: maps of several worlds at one-to-one scale. The Ringworld floor is of unnaturally strong material, dubbed
scrith,
with other unusual properties.
The sun itself is involved in the Ringworld's meteor defense. A superconducting network embedded in the Ringworld floor generates a superthermal laser effect in a solar flare. The drawback: it can't fire through the Ringworld itself. Thus any meteorite that strikes the Ringworld, such as the one that made Fist-of-God Mountain, generally rams upward from underneath.

Some details become clues to the nature of the Builders.
The plethora of harbors and fjords, plus the shallow oceans (most of them), suggest a race that uses only the top of an ocean.
The nastier life forms--mosquitoes, flies, jackals, sharks, vampire bats--don't exist. Hominids have moved into some of those ecological slots. The Engineers weren't ecologists, they were gardeners.
The inhabitants are hominids in bewildering variety, some intelligent, some not. They fill ecological niches which on Earth are held by almost any mammal, but particularly the nastier life forms, jackals and wolves and vampire bats ... as if mankind's ancestor,
Homo habilis,
had been protected until they numbered hundreds of billions, then abandoned to mutate endlessly.

You don't know the Ringworld until you've grasped its size.
After the book came out, a friend was going to build a scale model for an upcoming convention. He had a marble, a blue immy, to serve as the Earth, for scale. Turns out he'd need a ribbon five feet tall and half a mile long. The hotel wasn't big enough.
One guy who tried to map the Ringworld told me he ran out of computer space very rapidly. He ran into too many powers of ten.
David Gerrold speaks of a class of novel called "the Enormous Big Thing." Today you could fill a fair-sized shelf with them. Arthur C. Clarke's
Rendezvous with Rama
and Bob Shaw's
Orbitsville
are in that class, and so is my own
Rainbow Mars.
But
Ringworld
came first, published in 1970.
It might have been laughed at. Too big, too improbable. Any normal structural material would be torn apart by its spin. I waited for the reviews in some fear.
James Blish wrote that he thought it would win the Hugo Award, but it
shouldn't.
The readers gave it a Hugo Award anyway.
The writers gave it a Nebula.
I didn't have a sequel planned. I was not expecting a flood of redesigns.
During one of my speeches, a man pointed out that the Ring-world's mathematics are simple: it's a suspension bridge with no endpoints.
An academic in England pointed out that the tensile strength of the Ringworld frame must be approximately the force that holds an atomic nucleus together. (Hence,
scrith.)
A grade school class in Florida spent a semester on the Ringworld. Their conclusion: the worst problem is that, without tectonic activity, all the topsoil would flow into the oceans in a few thousand years. (Hence,
flup
and the spillpipes.)
At the 1970 World Science Fiction Convention there were MIT students in the halls chanting, "The Ringworld is unstable! The Ringworld is unstable!" (Did the best that I was able... hence,
attitude jets.)
Somebody decided that the shadow squares shed too much twilight. What's needed is five long shadow squares orbiting retrograde.
Ultimately there was too much opportunity for redesign. I had to write
The Ringworld Engineers.

All of these readers had found something worth knowing. The Ringworld is a great, gaudy, intellectual toy, a playground with the gates left wide open.
Some readers just read a book and stop.
Others play with the characters, or the assumptions, or the environment. They make up their own homework. We readers have been doing that for unguessable thousands of years: demanding more data on Atlantis from Plato, inventing Purgatory to put between Hell and Heaven, redesigning Dante's Inferno, writing new Odysseys. An amazing subculture has sprung up around Star Trek.
The Internet opens a whole new metaplayground for such people. A number of Web sites have sprung up (well, at least two) whose topic is Larry Niven's fiction.
In September 1999, tipped off by my lovely agent, Eleanor Wood, I logged onto
[email protected]
They were arguing about whether you can clone a protector, and whether Seeker and Teela Brown might have left a child behind. If they'd been right I wouldn't have seen a story, but they were off on the wrong foot, and I could fix it. After a few months of following these discussions, rarely interrupting, I had enough material for
Ringworld's Children.
This is a playground for the mind. It's a puzzle too, a maze. Question every turn or you'll get lost. When you've finished the book, remember not to lock the gate.

GLOSSARY
Aerobrake:
To shed velocity by passing through a planetary atmosphere.
Antispin:
Direction opposite the Ringworld's direction of spin.
Arch:
The Ringworld as seen from anywhere on its surface.
ARM:
Once the Amalgamation of Regional Militia; for several hundred years, the United Nations armed forces. Jurisdiction was originally limited to Earth-Moon system.
Autodoc:
Any system built to perform automated medical operations.
Belter:
Citizen of the asteroid belt, Sol system.
Canyon:
A world of human space, once Patriarchy property.
Carlos Wu's autodoc:
An experimental medical system first seen in "Procrustes".
Droud:
A small device that plugs into the skull of a current addict. Its purpose: to meter a current flow to the pleasure center of the user's brain.
Elbow root:
A ubiquitous Ringworld plant. Grows as a kind of natural fence.
Experimentalist:
A Pierson's puppeteer political faction now out of power.
Eyestorm:
The pattern of winds that forms above a puncture in the Ringworld floor. A tornado on its side. (Hurricanes and tornadoes are impossible on the Ringworld's flat surface.)
Fleet of Worlds:
The homeworld of the Pierson's puppeteer species, and four more worlds sequestered for farming, all occupy a Kemplerer rosette moving at near lightspeed.
Flup:
Seabottom ooze.
Flycycle:
A one- or two-LE flying device.
Fringe War:
All the spacegoing species of known space seem to have sent ships to Ringworld system. Bram, when he was in command of the Repair Center, shot them down if they approached too close. Tunesmith hasn't done that, and the Fringe War is currently in a cold state.
General Products:
A company owned by Pierson's puppeteers that sold mostly spacecraft hulls. Dissolved two hundred years ago.
The Great Ocean:
One of two salt seas on the Ringworld, measuring six hundred times the surface area of the Earth.
Grippy:
An all purpose hand tool.
Home:
A world of human space, unusually Earthlike.
Hot Needle of Inquiry: Second ship (of Experimentalist design) to reach the Ringworld.
Human space:
The region of stars explored by humanity.