Rise From the Ashes: Lena's Story 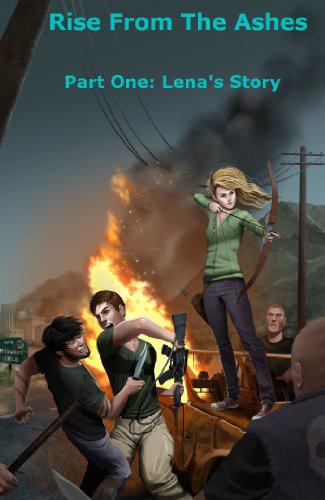 Art for Back Jacket

Rise from the Ashes

This book is created:

I have to write this down. What is happening is too unbelievable, and I'm afraid with all that’s going on I will forget things if I don't write them down. Or I will forget in what order things are happening and get confused.

It wasn't hard to find a blank journal, since all the stores are empty now; one small broken window and I'm in the bookstore. I grabbed all the blank journals on the shelf, as well as the plant ID guides and other stuff like that. Then I scooted back to camp.

I want to start this from the beginning, the way I became aware of what was happening ... first of all the flash and bang - but it wasn't just one. There was the far off flash/bang, maybe Boston? Then a closer one, maybe Keene NH. Then drifting clouds of toxic gritty stuff. It wasn't well done. I guess it was more like allergies - if you reacted, you were a goner. If you didn't ... well ... now it's survival mode, isn't it?

Survival. Do you think you know what that really means? Here is when I knew the world was in survival mode. I was just going into the forest, following a stream up a ways to get to the cleaner, fresher water higher up the mountainside. Something made the small, fine hairs on the back of my neck stand up. Really, it was creepy, a feeling like some monster was just behind me and about to reach out with a slimy paw to rip me up. Close enough to what was about to happen.

I had frozen in place when I felt that feeling. When I thought about a claw ripping me up, I drop to my knees and whirled around – right when the gun when off! Bark flew into my face from the bullet’s impact on the tree next to where I had just been standing. I felt the sting where the flecks of tree nicked me, knew there was a little blood, but I also knew I had to get to cover and then get help. I frog hopped to my left and crashed through the forest for a few running steps, then did a zag in another direction and dropped behind a big fallen tree. Holding my breath, I listened for whoever was behind me. Sure enough, I heard the careful crunching of someone walking on the leaves.

I reached back and pulled the gun from my backpack. I had just learned how to shoot a few days ago. Guess I was going to be put to the test early on. I’m a cute girl, up until now the stickiest situation I’ve been in is not getting the class I wanted in college. All I had to do then was flash a smile and open my green eyes really wide. That got the guy working behind the registrar counter to change the date on my add slip and then a few excuses about not finding the room to the prof and I was set. Now I’m crouching here holding a gun, listening to footfalls come closer and trying to decide when to pop out from behind this tree and blow another human away. Or get blown away myself.

I wasn’t shaking. I thought I would be, but I knew the score. Survival. I took a slow deep breath and eased along keeping the tree tight against my right shoulder. That way it could steady my aim. I did it smooth and fast, easing forward on a knee with the gun first. I saw him. I pulled the trigger. The sound echoed through the trees and I couldn’t hear the thud when he hit the ground, just saw him drop like a rock. My ears were ringing from the sound of my own gun.

I had never seen this guy before. A total stranger. I walked forward to get a better look. As I leaned over him I heard the click of a trigger being pulled back. It was a little muffled from my ears still trying to adjust, but there is just no mistaking that sound.

“Shut the hell up. All I want is your backpack.”

I could tell he was shifting his weight to get better aim, aim to shoot me and miss my backpack. A backpack filled with empty water bottles. Life was cheap.

I was getting ready to try another desperate zag when I heard the gun shot.

I hadn’t moved. I was trying to figure out where I might have been shot. Nothing. But the guy behind me had fallen down and I could see his arm and the hand holding his gun. They were flung out and nestled down in the lose leaves.

“Thank heavens. How did you get up here so fast?”
“I heard the gun shot. But really, I had a creepy feeling beforehand and had already started up after you.”

“Do you think they were following us? Are they Taliban?”

Mick walked up to stand beside me. We both took a good look.

“No. Just guys that lost their way. Lost what it means to be a human. Let’s go get that water and get going.”

It was good news that they didn’t look like Taliban bad guys. That meant we were still ahead of them. Mick didn’t consider the Taliban group as professionals, but we did know they had numbers behind them and lots of weapons. So even poorly trained men in large numbers could overrun our towns.

One thing I figured out with Mick - it really couldn't have been professional – as in a professional army or CIA or something like that. If pros did it -whatever those bombs had in them would have been like anthrax or small pox or something that would have basically killed us all. Whatever it was must have been created in some basement lab somewhere. I have no way to figure out how many are dead or what percentage of people made it. My small town just north of the Massachusetts border lost much more than half the people. That was from a quick count of bodies. God. Bodies.

After the shit hit the fan, many of the others headed to Boston or New York. I call it AB; After Bombs. That is really the way I think of it now, and it seems to make sense. It was a globally defining attack.

I still can’t figure out why so many people I knew headed to Boston and New York, towards where the bombs hit. Why the hell?

I guess they just needed to be around other people. Not me. There is something that makes people mean when they live in a city in normal days. Well, what
were
normal days. I can't imagine how horrible it will be now that there are no food trucks coming into town - almost no police. No way. I’m staying here in Vermont where I have a horse, a garden and a few people who I have known my whole life. Plus Mick.

Oh - OK - to whoever may read this ... I'm Lena. Say it like leaning. I guess I hate it when people say my name like a movie star – Lane-a, hate it. I'm 19 years old and was born and grew up in Brattleboro, Vermont. Basically a nice little town, a city to Vermont -but a little town to the rest of the U.S. Or what was the U.S.

I've got dark blonde hair and green eyes. I suppose I'm pretty, more athletic than model-like. I was taking college courses with a major in Public Relations. How funny is that now? There isn’t a “public” anymore.

Think the bombs and survival mode is the unbelievable part? Wrong. We have been thinking about that stuff in movies and books for years. I guess it kind of mentally prepared most of us for some sort of invasion, chemical or otherwise. No, the dreams are the creepy part. I don't know if people who have survived in other places are having them - and the dreams don't seem to be showing things according to how time works. That is why I had to start this - get this down on paper so I can read it later and try to make sense of it all.

Back to the start again, sorry I'm wandering around. The bombs went off, the nearest one was about 2 or 3 hours away. Maybe that's why there are still people here. I rushed home, but there was nothing I could do.

Dad was dead on the couch, he had been surrounded by Kleenex, the sneezing fit must have never stopped. That is the way it seemed to work on most people. Just like an allergy, then bam, dropping over dead. Not even blood really. Maybe a little around the nose. It's been a few months now, so I can write about it without tears falling all over the page. Dad was a great guy and he made sure after Mom died that he did everything for me. It was just us.

So I cried for a few hours then went back outside to see if my neighbors were there or dead too. That's where I figure that over 50% of us just died right away. Pretty much there was crying and shock from us "lucky" ones. Then Doug reminded us about the bomb.

"We've got to get some radios working and see what’s going on.”

Doug is a 40 something neighbor of mine, sells furniture. Stable kind of normal guy. Now his eyes are bugged out big, he has sweat all over him, he is one step from running around in circles. Still, he is trying to get a handle on things, put some order to the rest of the day. Once he had our attention he cleared his throat and tried again. He looks a little like a grown up Opie – you know from that Andy Griffith show? I never liked his red hair, but whatever, he is trying to do something, and right now anything is better than standing around.

“Come on, let's go to the police station."

Off we went in a little group. Sheriff Edwards was still with us. As in, not dead. Our Sheriff is kind of sexy but older. He is tall and fairly thin with muscles everywhere. He’s got brown hair, a little longer than a buzzed cut style. Grey is peppered all over his head. I don’t remember ever seeing him out of uniform. He’s a real solid guy.

He had the doors wide open and already a crowd was gathered in the main reception area. Edwards was behind the counter fiddling with a radio. Nothing was coming in on it. Static.

Lie Down in Green Pastures by Debbie Viguie
Permanent Resident at the Purse Table by Keisha Bass
Prisoner of the State: The Secret Journal of Premier Zhao Ziyang by Adi Ignatius
The God Equation and Other Stories by A.R. Co, Michael
Truants by Ron Carlson
Princes of Arkwright by Trafford, Daniel
The Chase, Volume 3 by Jessica Wood
Tea in the Library by Annette Freeman
Her Billionaire Secret: Part 4: An Alpha Billionaire Romance by Jenna Chase, Elise Kelby
The Face That Launched A Thousand Bullets (The Cartel Publications Presents) by Styles, T.
Our partner