Read Rising of a Mage Online

Rising of a Mage 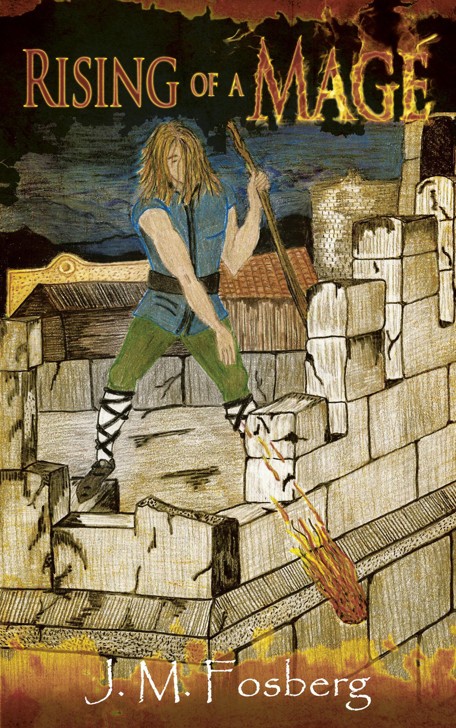 Rising of a Mage

Magical Items and Their Creation

The Attack on Kampar

The Last Days in Kampar

I
dedicate this book to my father, Tim Fosberg who introduced me to the world of fantasy, showing me that at any time I could be anyone in any place.

S
pecial thanks to Kathleen Lambert for the cover art.

I would also like to thank Jim Parsons for taking my grammatically massacred story and making it readable.

“A
nwar! He went to the gate to talk to Jabaal.” Mariah threw on her coat, strapped on her sword, tucked her bow string in a pocket, and threw her quiver over her shoulder. She grabbed her bow and Anwar’s staff and sprinted to the gate. As she approached the gate she saw guards piling up the stairs onto the walls. No one was firing, which meant the attack was not in range of the walls yet. She had made it before it started. Then she saw Anwar, standing on the wall above the gate. Dozens of magical bolts were flying from each hand, followed by fireballs. Guards all around him were yelling and cheering him on. “Well, almost before it started.” She bolted to the stairs nearest the gate. She pushed her way through the guards until she was on the wall next to Anwar. He looked down at her and smiled. She handed him his staff.

“Ah yes, thank you, my love.” Then his barrage began anew, dozens of bolts flying from his hand and mirror of those flowing from his staff.

There were thousands of goblins coming toward the city. This didn’t make sense. Goblins were not organized like this. Where had so many come from? She watched as Anwar’s killed hundreds. They were just under five hundred paces from the wall when she saw the first of the city’s defences. Well, besides Anwar of course. Catapults began throwing huge boulders into the oncoming rush of goblins. Anwar continued to throw his magic. Goblins were falling dozens at a time. Mariah saw more fireballs and magic bolts hit the oncoming rush. She followed them. A few hundred feet down the wall stood Master Gabrielle with three other wizards. The four of them were nearly matching the onslaught that Anwar was throwing. The invading force was two hundred paces from the wall. Now Mariah reached into her pocket, pulled out her bow string and strung her bow. She heard the first command before she had taken the first arrow from her quiver. “Loose!” Hundreds of arrows flew into the air falling into the mass of goblins. She heard it again. “Loose!” She fired her first arrow and it was lost in the air with hundreds of arrows. Hundreds of goblins fell again. She nocked another arrow. “Loose!” She fired again and hundreds more fell.

“Loose!” She fired; hundreds more fell. “Loose!” Again. “Loose!” Again. “Fire at will!” The force was at the wall now. Anwar raised his staff and a wall of fire erupted at the base of the wall. Nearly a hundred goblins died. The gap was filled in less than a minute with a hundred more. Ladders were being placed on the walls. A huge fire ball came flying towards them. It was aimed straight for Anwar; guards all around him dove away, but just before it hit him, it winked out. Anwar was smiling? “There you are.” Anwar turned and saw that all of Captain Anthony’s raiding party was standing next to him now, firing arrows down into the crowd below. He cast a magical shield over each one.

“You got this?” he asked Captain Anthony.

“It seems they have a very powerful wizard out there who needs to be stopped.”

Captain Anthony just nodded. Anwar disappeared. Mariah was there with Captain Anthony’s group now. They continued to fire down into the enemy at the wall. Guards who did not have bows or had spent there arrows were running along the wall pushing ladders away sending the goblins on them and under them to their deaths. Others pulled empty ladders up over the wall. Mariah saw a dozen ogres with huge shields marching through the goblin army toward the gate. Dozens of arrows bounced off those shields to no avail.

Captain Anthony shouted “To the Gate!”

Mariah fired one more arrow and turned to follow him. A dozen other guards without bows ran after the famous raiding party. Many of the guards who were now running out of arrows took up there places keeping the ladders off the wall. A few goblins were making it onto the wall in different places. They were cut down in quick order, the ladders they made the wall on begin pushed away again, but a few guards were wounded or killed in each of these skirmishes. Mariah felt the ground rumble as the ogres outside slammed their battering ram against the gate the first time. Captain Anthony was standing in the front, sword drawn. The rest of the party stood with nocked arrows. After the tenth time the Ogres had slammed the battering ram into the gate, the huge wooden barrier holding the doors together started to give. As the battering ram slammed against the gate again, the wood nearly broke in half and the gate was forced inward leaving a foot wide gap. Five arrows flew through that gap followed by five more. There were loud shrieks of pain on the other side of the door that could only have come from the huge ogre. There was a few seconds pause as new ogres took up the place at the front of the battering ram to replace those who had gone down and then Mariah heard the impact of the battering ram and then the loud cracking noise of the barrier breaking away. Captain Anthony yelled, “BREACH! THE GATE’S BEEN BREACHED.”

As the gate was forced open, Mariah fired another arrow into the face of the first ogre she saw, another took it in the chest. She saw that two other ogres went down. The rushed forward to fill the entrance and fight the huge beast and goblins. Guards were running down the stairs to fall in behind them and fortify the gate. Mariah threw her first dragon dagger into the face of one ogre; her second took another beast in the cheek and buried itself to the hilt. The monster stumbled back a few steps but did not go down. Her third dagger, a rose dagger, followed the second, taking the beast in the eye. It toppled to the ground, crushing three unlucky goblins that could not get out from under him. Captain Anthony was standing in front of another huge ogre, ducking and parrying the powerful swings of its huge club. He was scoring hits, but nothing that would bring the thing down. She took her last dagger in one hand, her sword in the other, and joined in the madness. All of Captain Anthony’s group were pairing up against the huge ogres and the rest of the guards were happy to face the much smaller foe forcing their way into the entrance of the city. Mariah ran past the ogre Captain Anthony was standing against alone, running her sword across the back of its leg, hamstringing it, as her dagger hand went forward, driving the blade into a goblin’s throat, which sprayed her with the foul smelling blood. As the ogre howled in pain and fell to its knees, Captain Anthony drove his sword through the thing’s chest. Mariah spared a glance, and saw Victor and Ezekiel bring down the last of the ogres. The guards of the city, filled with renewed vigor as they saw the last of the giant things meet its death, began pushing forward. Soon they were outside the gate, more guards pouring out, arrows still coming down from the wall. The tide was turning.