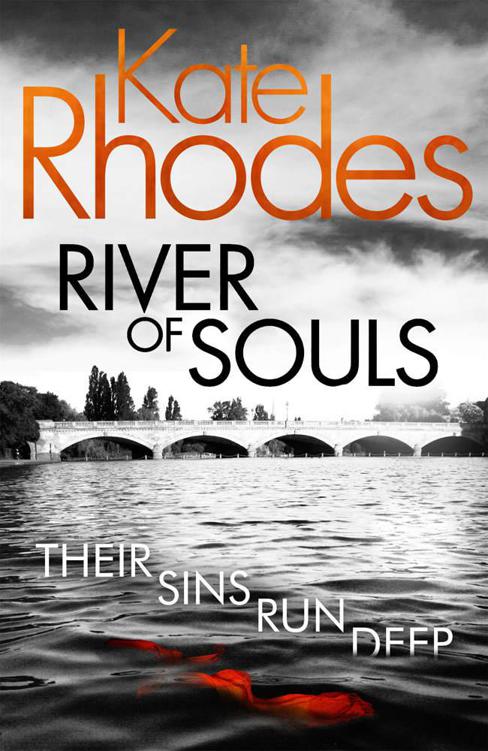 A Killing of Angels

First published in Great Britain in 2015 by Mulholland Books

The right of Kate Rhodes to be identified as the Author of the Work has been asserted by her in accordance with the Copyright, Designs and Patents Act 1988.

All rights reserved. No part of this publication may be reproduced, stored in a retrieval system, or transmitted, in any form or by any means without the prior written permission of the publisher, nor be otherwise circulated in any form of binding or cover other than that in which it is published and without a similar condition being imposed on the subsequent purchaser.

For my sister Honor Rhodes, OBE, my favourite history expert

‘The Thames is in many respects the river of the dead. It has the power to hurt and to kill.’

‘The river had an awful look, the buildings on the banks were muffled in black shrouds, and the reflected lights seemed to originate deep in the water, as if the spectres of suicides were holding them to show where they went down. The wild moon and clouds were as restless as an evil conscience in a tumbled bed, and the very shadow of the immensity of London seemed to lie oppressively upon the water.’

The Thames is preparing to race back to the sea, currents twisting like sinews of muscle. Endless rain has upset its smoothness, reflected lights scattering in a blur of silver. A man stands beside it, gazing across the water’s moonlit surface, listening to the voices of the drowned. They whisper to him at night, begging to be remembered. It has taken him hours to walk here, reciting a litany of bridges: Lambeth, Vauxhall, Chelsea, Albert, Battersea. The journey has exhausted him, but the first soul is within reach. He senses it in his quickened breath and the excitement pulsing in his chest.

It’s late when he finally enters the churchyard. Traffic hums on Battersea Church Road, and the gravestones jostle him, standing and falling like soldiers in a battle zone. He forces himself to concentrate before stepping over the threshold. There’s a stink of incense and stale communion wine, lights bright enough to dazzle. He drops onto a pew at the back of the nave, lets his forehead rest on the balls of his hands until a man’s voice addresses him.

‘Evensong’s over, I’m afraid. I’m just locking up.’ An elderly priest, white-haired and pinch-faced, peers down at him. Only his eyes are memorable; cornflower blue, unblinking. ‘I’ve seen you before, haven’t I? You’re soaked through. Come this way, my friend. There are towels in the vestry.’

Dust motes hang in the air. There’s a moment’s stillness before the hammer falls. The first blow strikes the priest’s temple, his body crumpling. The river’s instructions grow louder as the man drags his victim back through the churchyard to the water’s edge. He has prepared for this moment, but it still fills him with horror. If he could choose he would walk away and let the priest recover, but the decision isn’t his to make. The next stage must be accurate. There’s a splintering sound as the chisel enters the old man’s skull, followed by a single loud scream. Now he must act fast so everything is complete before his spirit can escape. The priest is unconscious as the Stanley knife swipes along his brow then down his cheek. The blade makes cut after cut, slicing skin from bone. Nausea threatens to overwhelm him, but the man only has moments to complete the river’s orders. His fingers tremble as he ties the talisman to his victim’s wrist, binding the circle of antique glass tightly in place.

Fast-flowing currents tug at his clothes as he wades into the river. When he’s waist deep, the tide seizes his victim from his arms, black robes fanning across the surface. The priest’s lifeless body drifts east as his soul blends with the river. Tonight the man’s duty is done. By morning the Thames will deliver the body to the correct destination, his secret washed clean. The man sinks to his knees, letting the black liquid close over him. Then he wades back to the shore and stands in the graveyard, staring again at the river while its lifeblood drips from his hands.

It was still raining when I reached St James’s Park on Monday morning. The Thames Barrier had been raised for the third time that week. London’s ancient drainage system was failing to cope, murky water bubbling up through the grates. It was tempting to catch the first bus home, but I’d been invited to meet the chief officer at the Forensic Psychology Unit of the Met, and I was intrigued. So I hurried on, with rain cascading from my umbrella.

The headquarters of the FPU was a discreet brown stone building on Dacre Street, four storeys high, a stone’s throw from New Scotland Yard. The fact that there was no sign above the door seemed a wise move. Advertising the unit’s purpose would make it a target for every psychotic villain the specialists tracked down. The building’s interior felt equally anonymous, the foyer more like a dentist’s waiting room than the UK’s nerve centre for forensic psychology. It had white walls, a small reception desk, and coconut palms gathering dust either side of the door. The receptionist’s smile was sympathetic, as though I’d checked in for an extraction.

‘Professor Jenkins’s office is on the top floor.’

I was looking forward to meeting Christine Jenkins. Her books on personality disorders had been set texts on my degree course, and the urgent tone of her assistant’s phone message had sparked my curiosity. Photos of eminent psychologists lined the building’s walls. Jean Piaget, Elizabeth Loftus and Carl Rogers studied me gravely as I climbed the stairs.

The professor’s door was open when I arrived. She stood with her back to me by a large window, arms rigid at her sides as if she was marshalling her strength for a fight. She spun round immediately when I knocked: tall and slim, with cropped grey hair, wearing a smart suit. She greeted me with a formal smile.

‘Thanks for braving the weather, Dr Quentin.’

‘It’s no problem. A bit of moisture never hurt anyone.’

‘This is the wettest June on record – you must be an optimist.’

I returned her smile. ‘Only until circumstances prove me wrong.’

She indicated for me to sit down. ‘Do you remember an attack on a young woman called Jude Shelley last year?’

‘Of course, the cabinet minister’s daughter. The reports said she was in intensive care for weeks.’

Jenkins’s smile vanished. ‘Someone dragged her into a car after she left a party on Lower Thames Street. He drove a sharp implement into her skull, a screwdriver or a chisel, then slashed her face and threw her into the river. The girl was barely alive when she washed up by Southwark Bridge. She’s been in hospital ever since.’