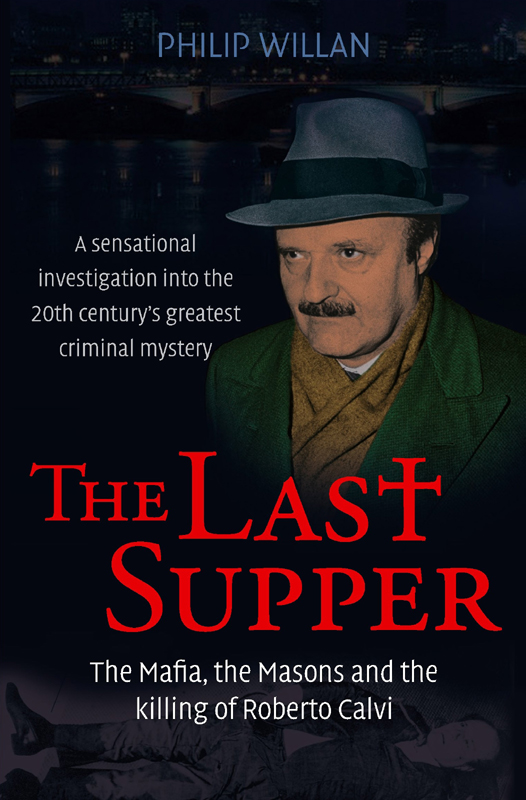 PHILIP WILLAN
has worked as a freelance journalist in Rome for more than 20 years and has specialized in covering the murky side of Italian cold war politics. He contributed research to David Yallop’s best-selling book
In God’s Name
, on the alleged murder of Pope John Paul I and he later helped Charles Raw with his research for
The Money Changers
, an examination of the relationship between the Vatican and the Banco Ambrosiano, and the events leading up to Roberto Calvi’s death. His first book,
Puppetmasters: The Political Use of Terrorism in Italy
was published by Constable in 1991.

The Mafia, the Masons and the
Killing of Roberto Calvi

an imprint of Constable & Robinson Ltd, 2007

The right of Philip Willan to be identified as the author of this work has been asserted by him in accordance with the Copyright, Designs and Patents Act, 1988.

All rights reserved. This book is sold subject to the condition that it shall not, by way of trade or otherwise, be lent, re-sold, hired out or otherwise circulated in any form of binding or cover other than that in which it is published and without a similar condition being imposed on the subsequent purchaser.

Publication Data is available from the British Library.

4   The Ministry of Fear

11   Enter Carboni, Armed with a Cheese

15   Water Under the Bridge

Roberto Calvi in uniform as an officer of the Novara Lancers

Roberto Calvi with his wife, Clara

The Milan headquarters of the Banco Ambrosiano

Flavio Carboni, the Sardinian businessman who organized Calvi’s journey and is accused of delivering him to his assassins

Silvano Vittor, the Trieste smuggler who accompanied Calvi to London as a companion and bodyguard

Ernesto Diotallevi, a businessman from Rome who denies links to the Rome underworld and any involvement in the Calvi murder

Giulio Andreotti, the former primer minister of Italy, at his trial in Palermo for collusion with the mafia

Licio Gelli, the head of the P2 masonic lodge

Archbishop Paul Marcinkus, the head of the Vatican bank

Michele Sindona, the Sicilian banker who initiated Calvi into the mysteries of offshore banking

Eligio Paoli, an informant of the finance police known as ‘Source Podgora’

Francesco Pazienza, consultant to Calvi and to the Italian secret services

The Parliamentary P2 Commission concluded that the lodge membership lists found in the possession of Licio Gelli are an accurate guide to the lodge’s adherents. Some of those named in the lists disagree.

Much of the information in this book is drawn from the mass of documents presented by the prosecution to the trial in Rome of the five people accused of Roberto Calvi’s murder. Made available to the parties on DVD and CD-Rom, the documents have such an incomprehensible indexing system that I have not attempted to identify them in the endnotes. Where quotations were originally in Italian, the English translations are mine.

FBI
US Federal Bureau of Investigation.

IOR
The Vatican bank,
Istituto per le Opere di Religione
(Institute for the Works of Religion).

OSS
US Office of Strategic Services, forerunner of the CIA.

23 Mar.
Cisalpine Overseas Bank founded in Nassau. Marcinkus takes a seat on the board.

1972: Calvi buys the Banca Cattolica del Veneto from the IOR for 27 billion lire.