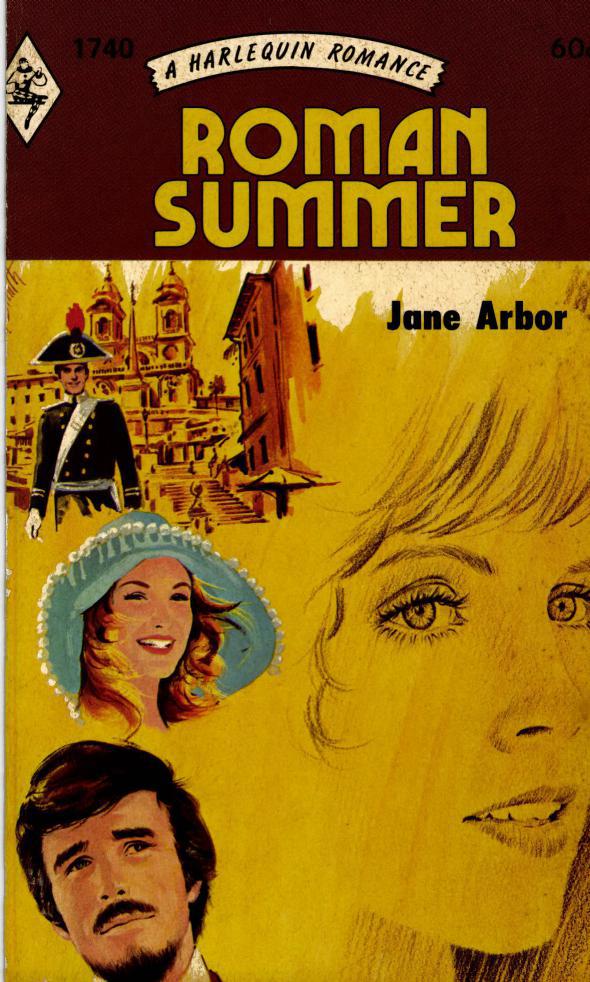 B
ut for Ruth it meant having to fight her old attraction to
Erle
Nash, who had said, “The folly of marriage is a heady, distracting adventure I don’t mean to afford”.

As if to show her equal command of both Italian and English,
little
Signora Matteo always mixed her greetings and partings so, and Ruth, indulging her, would reverse the order and reply in kind, ‘Till Friday.
Arrivederci, signora
’—and another of Signora Matteo’s English lessons would be over.

Today Ruth gave her time to patter down the stairway from the flat, then moved to the window to watch her emerge on the pavement of the busy Via Tre Fontane, plunge dangerously into the noisy
hustle
of scooters and cars, and disappear among the crowds on the opposite side. But though Ruth’s eyes were on her pupil her thoughts were more on the letter which she half regretted posting three days ago; the letter which had resulted in the peremptory summons to her, signed by a secretary to ‘attend for interview’ at the Via del Corso offices of a certain Er
le
Nash at noon tomorrow.

Would she go? Or not? There was still time to excuse herself by telephone. No doubt there would be others of her kind ‘attending for interview’; one of them would be successful in gaining the post of hostess-companion to a young English girl and the Ruth Sargent who had failed to show up would never be known on the Via del Corso, nor ever be regretted by anyone.

S
he had first seen the advertisement in
La Gazzetta
a week ago, her heart thumping a little as she read it through, seeing the name
Erle
Nash
jump out at her from the type, telling herself it had no significance for her now, though knowing that, if only for the sentimental past’s sake, it had. But if the advertisement had not appeared for three days running, showing the advertiser was not yet suited, she thought she would have done nothing about it. Those three appeals had been her undoing. She had written her own letter and posted it.

Now, as she folded and propped up today’s
Gazzetta
to read over her cold lunch of salami and salad, she was remembering why she always saved the paper to read at this meal. It was because, while Alec was alive, it had been their conversation time. Breakfast was a hurried affair of rolls and coffee; in the evening they ate off trays and watched television, or they went out and supped at a trattoria or pizza-stand, or, on nights of high summer when the city heat was unbearable, they pocketed a picnic meal and drove their little runabout out into the Roman countryside and walked in the dark.

Today, four years later, there was no runabout. There were other more pressing expenses for a young widow to meet; the problem of earning a living to solve; day-to-day loneliness to combat, without deliberately evoking memories by visiting places where they would never be happy together again.

At first there had been friends who had helped. But it was an occupational hazard of Alec’s colleagues in the Rome branch of the Far Cathay Travel Service that they moved on at short notice to other fields of work. To and from the Rome branch they came and went and, out of sight, the ties of friendship did not often stand the strain. For some time now Ruth had had no intimates. As time went on her only new contacts were those of her pupils for English lessons, and they were merely twice-weekly visitors to her home. She was rarely invited to theirs.

Now the pattern of her days was fairly set. She still knew an ache for Alec, but it was by now more a longing for the companionable things they had shared than it was the deep, soul-destroying hunger that it had been at first. Now she could meet the speculative, opportunist look in the eyes of men without allowing invitation to show in her own. Sometimes she wondered if, at twenty-nine, she had forgotten what love was about. But she hadn’t been tempted to learn the bittersweet way of it again, lest circumstance should betray her a second time as the air crash which had taken Alec from her had betrayed her once.

Money was tight. She had had the lump sum of Alec’s life insurance and she had a small pension from Far Cathay. She could have earned more in England than she did from giving English lessons and doing some freelance translating. But she had no ties in England, now her parents had retired to Malta. She clung to Rome as a climbing plant to a sunny wall. To her it was home.

She could not have said what had stirred in her at the sight of
Erle
Nash’s advertisement. Curiosity, she wanted to think—a curiosity which was no disloyalty to Alec, since
Erle
Nash had happened to her long before she met Alec. Her heart had jumped in that odd way merely because the name had evoked a blush- making memory of her youth as it had never yet done when it had shouted at her from placards and bill-postings and the Sunday papers. Somehow the advertisement had brought him closer and herself into his rarefied orbit. And so she had sent her letter of contact, and now, though she pretended to doubt her intention, knew that she would be going to wait upon the man’s pleasure at noon tomorrow ...

The address she sought was a block which made a
corner
of Corso with the Piazza Colonna. Her footsteps echoed on the marble floor of the entrance hall; a notice-board in black and gold directed her up the graceful staircase to a circular mezzanine floor. Halfway round it the slot on a pair of double doors read,
‘
I
mprese
Erle
Nash
’,
and the doors themselves gave on to an outer office, the walls of which were covered with signed studio portraits of both men and women—all of a type, studiedly posed, all the subjects with assured presence. The tributes of the musical world to
Erle
Nash, its professional godfather, as it were.

At a desk sat a young man, probably the secretary to
‘Enterprises
Erle
Nash’, who had written to Ruth, for he nodded knowingly as she introduced herself, then asked her to sit down. Signor Nash was in, but occupied. A quarter of an hour, perhaps less, and he might be alerted that Ruth was here.

While she waited she speculated on how
Erle
Nash might have changed. Her image of a successful impresario was of a middle-aged and portly type, with a goatee beard, shrewd eyes, and fat hands; his smoke the best Havanas that money could buy. In fifteen years
Erle
couldn’t yet be middle-aged, but he might have come to pattern in the rest. And would he recognise her, she wondered, as the ponytailed redhead who
—
?

She started at the buzz of an intercom from an inner room. The young Italian secretary jumped as if he had been stung, and then at the crisp
‘
Avanti
!’
in answer to his knock, he ushered Ruth into the further room with a ‘Signora Sargent,
signore
,’ by way of introduction.

Swiftly Ruth appraised the man who rose briefly, gestured her to a chair, and met her eyes without a glimmer
o
f recognition of her in his own.

He had hardly changed at all, except that adulthood had deepened the expression lines of his face and there
w
as now a Shakespearean curve to longish brown hair which she remembered as an unruly boyish crop.

He had put on no weight, she judged, noting his easy- muscled shoulders as he sat at his desk, and though he hadn’t smiled yet, she knew she was waiting for his trick of lifting an eyebrow at the same time as a
corner
of his mouth. He couldn’t have lost that, could he? It had been the most disarming weapon in his armoury. She thought he had probably always known the value of that one-sided smile.

She saw him studying her; the petal cut of her hair; approving, she hoped, the contrast of her white short
-
sleeved suit with her tan which was almost a feminine uniform in Rome; the detail of feet in narrow-thonged sandals, wrist-length gloves, shoulder-bag, and her face—his scrutiny of that, however, the impersonal, business-like appraisal of a stranger.

He repeated his secretary’s introduction, making it a question. ‘Mrs
.
Ruth Sargent?’, to which she nodded Yes, and then added, ‘I was born Ruth Anson’, adding again to that the single word, ‘Charlwood.’

‘
Charlwood
?’
His echo of the school’s name was startled, then, ‘You know I was there, you mean? That
—you
were?’

Ruth nodded again and smiled. ‘At the same time as you were. Though’—making it easy for him—‘you wouldn’t remember me, I daresay. You were in the Sixth and Head of School in your last year, while I was still in Form Four B.’

He shook his head. ‘No, I’m afraid it doesn’t register. But of course’—making it easy for himself—‘between Middle and Upper Schools there was a pretty wide generation gap, wasn’t there?
’

‘Four years—a lot in those days,’ she agreed.

‘And there were hordes of you juniors, it seemed to us. All,’ he smiled deprecatingly and the quirk of eyebrow and mouth were still there—‘all of you looking more or less alike—like the Chinese, you know.’

‘Or I don’t know
—
’ he sat back, propping his chin
on the ball of a thumb—‘I do remember one kid, a girl with red hair in a ponytail and a lot of freckles. She appeared out of a thick fog, dribbling a hockey-ball. But what was I doing on the girls’ hockey-pitch on a weekday afternoon? I’d even got a hockey-stick as well, and this infant and I were apparen
tl
y alone on the field.’

R
uth took pity on him. Watching him, she said, ‘You
w
ere, by that time. It was a half-holiday, but people who came to school by bus hadn’t gone home at lunchtime because of the fog, and there was to be a school social that night. And the other people who’d been putting in time, fooling about in a scratch game of hockey, had given up when they couldn’t see the goalposts
—
’

He nodded, bouncing his chin on the thumb. ‘M’m, yes. It’s coming back now. I said to this wench, “You’ve
got rusty eyebrows
—
” ’

‘And she said, “If you’d got hair the colour of mine,
you’d
have rusty eyebrows. They have to match,”’ Ruth supplied.

‘I was fourteen,’ Ruth said with dignity.

His glance swept her. ‘The hair, yes. Could be. But the freckles?’

‘When my face is tanned, they don’t show as much. I told you my name. You knew I couldn’t help knowing yours, and we got a bit acquainted while we played a
one-man-a-side game and
—
’ but she stopped short
of the dream which had remained a dream—that at the social he would ask her to dance. He hadn’t. And now he was questioning, ‘Ruth Anson, you said? But what are you doing in Rome?’

‘Ah, I’m afraid I let my chap out yonder screen the letters and sort the sheep from the goats, so to speak. Tell me about yourself, won’t you?’

As Ruth briefly sketched her circumstances he interrupted once or twice to ask:

‘You must be pretty bi-lingual now?’ And, ‘When you lost your husband, why didn’t you go back to England?’ And finally, ‘Well, I know my job makes me a bit of a nomad between cities, but if you’ve known that Rome is one of my main bases, why haven’t you looked me up before?’