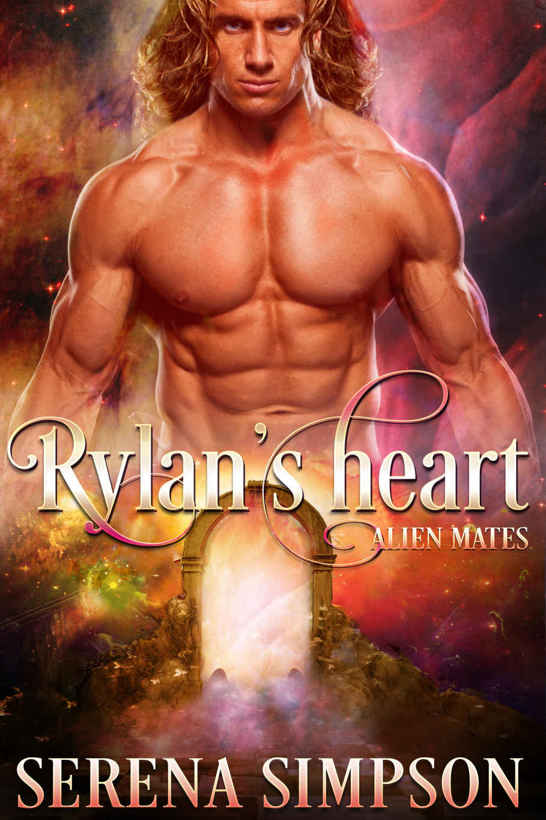 Other Books by Serena Simpson

This is a work of fiction. Names, characters, businesses, places, events, and incidents are either the products of the author’s imagination or used in a fictitious manner. Any resemblance to actual persons, living or dead, or actual events is purely coincidental. This book is licensed for your personal enjoyment only.

Other Books by Serena Simpson

Soul-Bonded to the alien
Book 1

Once you’ve read Rylan’s Heart, I hope you will take a few minutes to leave me a review. I’d appreciate it!

I can also be found on
face book

Look for me I’m happy to connect with all.

Rylan left the bed and breakfast looking around to make sure he wasn’t followed. It was going to be an early spring this year and that’s what he needed. He was going crazy being stuck in the same place. It wasn’t that he couldn’t leave; he could jump on the back of his motorcycle anytime and go anywhere he wanted. Although riding a bike in the middle of winter didn’t make good sense, it wasn’t like the temperatures really bothered him.

He stayed in place because of Aviana. Just thinking her name affected him, made his heart pound just a little faster. He ignored it until her big brown eyes swam in front of his face. Soft, his Matra whispered in his ear, but he ignored him. He had to let her go; he couldn’t mate no matter what his body told him. He would be her death, if he tried.

His Matra was the other side of who he was. The ability to change shapes was one he was born with although it had not always been that way for his people. When he was in his Arbrin form, he could pass as human. His Matra form was considered an alien on Earth.

Rylan stalked down the street; it was late enough that all the human residents of Newburg were asleep. The only thing up this late was his prey. He tucked thoughts of Aviana away to be examined another time and pulled a dagger from his boot.

Rounding the corner, he stepped into a trap.

“I’ve been waiting for you.”

Rylan looked at the Sudir standing before him. It was ugly, standing on four legs with a head full of eyes. The plus for the Sudir was that he didn’t really stand; instead he hovered over the ground making most humans think he was actually walking. Normal humans couldn’t see through his glamour. Humans like Aviana, who are gifted, could see through his deception. He would never be able to leave her as long as this Sudir was alive.

“Sudir, what an unexpected surprise.” He had eluded them ever since Cal and Paige managed to defeat him. Although it was just a matter of time before he showed up again.

“Rylan…” the Sudir breathed his name like he was a drug.

“You know my name. Seems only fair I should know yours.”

Sudir’s were known to be secretive about their names. He always wondered if a Sudir’s name held the clue to their defeat.

The Sudir gave him a huge smile, showing several rows of teeth.

“Why is my name important? You can call me Master. I like the sound of that.”

“I killed the last Sudir who thought I should call him master. If I remember correctly his name was Xolon.” He watched as the Sudir’s face reddened and his eyes narrowed.

“Xolon died in an accident.”

The Sudir flew at him; Rylan moved out of his way and stood to the side smiling while the other grasped at air.

“I’m also faster than you think. Maybe you should thank Xolon for that.”

Rylan had been captured and tortured as a child by Xolon. Memories of the pain he experienced threatened to swamp him. Harshly he pushed them away, unwilling to let this Sudir see his pain.

The Sudir opened his mouth and licked his thin lips. “You were strong enough to survive Xolon. I bet you taste delicious.”

The Sudir didn’t want him for his flesh although they loved humans raw. He wanted Rylan for his essence, that shinning glow around him that taunted the Sudir with a source of nutrition and power. He was strong, maybe stronger than Cal and Paige who had managed to escape his clutches for now.

“I tire of this game.” Rylan turned his back and began to walk away.

“Where are you going?” The indigent Sudir flashed himself in front of Rylan.

“I tire of playing all of these games. I believe I will retire for the night.”

“We are not playing games, and you are coming home with me tonight.”

“Not on the first date! What kind of Arbrin do you think I am?” He gave the Sudir a smile as he feigned shock at such a thought. “Your name Sudir, or I will leave you here to dream of what could have been.”

Rylan watched as the Sudir studied him. The Sudir wanted him, actually he wanted all of them but Rylan would be a coup and he knew it. The Sudir had to know he had no chance of getting close to him without surrendering his name. Also, all he had to do was hop on his bike and this Sudir would never see him again.

“I will tell you my name since I will make you scream it someday. You may call me Zuhun.” He etched a faint bow and smiled, showing all of his teeth.

“Zuhun. What kind of name is that for a Sudir? Does it have a meaning I should be aware of?”

Rylan waited a heartbeat before turning away from Zuhun. It was a gamble even though he knew the Sudir would never relinquish the meaning of his name. In their world names had power; he was surprised Zuhun wanted him badly enough to tell him his name.

“Do you think you can overcome me?” he asked, his voice low and deadly knowing Zuhun would attack him if he felt that Rylan was defenseless.

Rylan turned and let his all white eyes reflect in the small patch of light given off by the streetlight. Zuhun sucked in a breath and made a tactical retreat.

“Another day, Rylan. You will be mine.”

Rylan let out a deep breath as Zuhun retreated. Reaching deeply within, he grabbed his Matra and wrangled him into submission. He could not enter the bed and breakfast Victor and Selma owned like this, more importantly, he couldn’t come into contact with Aviana like this.

Aviana lie in bed, tossing and turning. Her body reached for, ached for someone she couldn’t have. She had watched him as he stood before her, his powerful legs spread wide, his hands on his waist, and his mouth curled into a sexy smile.

Rylan, he was the picture of everything she ever wanted in a man. He made it quite clear he wasn’t interested in her or her bountiful curves. She didn’t care; she ignored the image behind her sleeping eyes. He wasn’t that impressive.

She sighed, he was impressive, but she hated to admit it. He caught her attention in the midst of the problem with her daughter and Vick who was missing. Vick was Victor and Selma’s son. He was safe now or so both his parents assured her. They also assured that as long as she and Mckayla stayed at their bed and breakfast they would also be safe. They had been living here for close to three months and would have to go home soon. They couldn’t live on charity forever.

She tossed and looked at her dream Rylan again. He was the perfect replica of the original. His sea blue eyes caught her attention making it hard to breathe. She could stare into his eyes all day long; it would be heaven. His sharp features were softened by his thick brown hair. It hung a little longer than his shoulders making him look rakish. His nose was sharp like a blade making her want to run her tongue across it and down to his cheeks. His face could grace the cover of a magazine. He was beautiful.

He was also a twin. His brother Gabe looked like him, sort of. They were identical twins but there was no way she could ever get them mixed up even if Rylan didn’t carry a dark aura of danger around him. Gabe left her cold whenever he was around. Her body was a lake of fire when Rylan was near. She tossed again seeking rest in sleep.

“Mommy!” Aviana’s eyes flew open as her arms caught a ball of little girl that hurdled into them.

“I had a dream that a bad man was after me and he was going to try and hurt me like he hurt Vick.

She started having scary dreams a month ago. The dreams bothered her but she didn’t think Mckayla needed to see anyone. At least not yet. After they found Vick and he assured everyone he was fine, Mckayla seemed fine also. Her natural joy for life returned with a vengeance. But now she was having dreams more frequently.

“Shh, baby it will be ok.” Aviana rocked her as Mckayla’s hot tears soaked her breasts. “Mommy will keep you safe.”

She finally fell asleep. Aviana eased into a reclining position and held Mckayla close. Maybe it was time to get out of Newburg. It wasn’t a secret that things were different here. Humans and others, as she liked to call them, worked, ate and sometimes slept side by side. The sane humans pretended the others didn’t exist and turned a blind eye to their activities.

Aviana considered herself sane, but always thought it made more sense to know what was happening than to deny that it happened. She knew that Victor, Selma, and all the others who lived at the bed and breakfast weren’t human, not that she was likely to blurt it out. She also knew they thought she was different. Human with a twist. She, of course, denied this, but it was becoming more difficult as Mckayla made comments and saw things she shouldn’t be able to see.

As each day passed she was beginning to feel like she wasn’t human and she somehow passed the condition off to her child. Her mind drifted to Mckayla’s father. That had been a nightmare and her body began to shiver as she thought of him. Hastily, she pushed those thoughts behind her huge ‘do not disturb for fear of death’ door. Mckayla’s father didn’t matter. He wasn’t in the picture anymore and never would be.

Lumen by Joseph Eastwood
A WILDer Kind of Love by Angel Payne
The Apple Tree by Daphne Du Maurier
Unbreakable Love by Angela Carling
When Elves Attack by Tim Dorsey
Only Child by Andrew Vachss
The Girl of Ink & Stars by Kiran Millwood Hargrave
The Best Australian Stories by Black Inc.
The Book: On the Taboo Against Knowing Who You Are by Alan Watts
Grave Delight (A Maddie Graves Mystery Book 3) by Hart, Lily Harper
Our partner