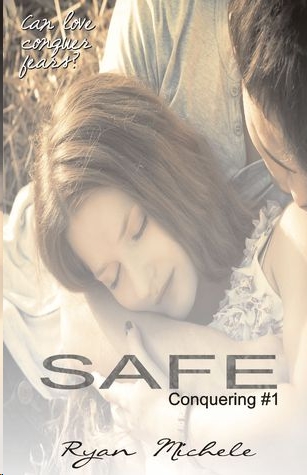 All rights reserved. No part of this book may be reproduced or transmitted in any form or by any means, electronic or mechanical, including photocopying, recording, or by any information storage and retrieval system, without permission in writing.

This is a work of fiction. Names, characters, places and incidents are the product of the author’s imagination or are used fictitiously, and any resemblance to any actual persons, living or dead, events, or locales is entirely coincidental.

To my daddy, who always believed in me—even when I didn’t believe in myself.

“This is it Sadie, you’re going. No excuses this time.” I heard my mom’s voice screeching like nails on a chalkboard slithering down my spine. I knew she was right, but I couldn’t leave just because of him. He already had so much power over me that I didn’t want to give him anymore.

“Mom, stop yelling,” I groaned. Does she not understand that my head is going to blow into a million pieces at any moment? As if the hundred sledgehammers beating the hell out of it wasn’t enough ...

“I’m gonna yell ‘til you get it in that thick, stubborn ass head of yours that this is over … right here … right now. You’re done.”

Mom’s rant continued for what felt like an eternity. All I could hear from her was whaa … whaa … whaa... She sounded like that teacher from that one cartoon. My mom had always had my best interests at heart, but packing up everything I’d ever known was not an easy thing to do. Then, to top it off, to run away because of him pissed me off.

My heart ached at the thought of not seeing my mom or my best friend Macy. I mean, shit, I’d handled this for three years now. I could continue, right?

“Mom, please stop.” My voice was barely audible, but I knew she heard me. I closed my eyes, trying to drown out the florescent lights of the hospital room that began inflicting more pain on my head; it wasn’t helping much.

“No Sadie. I’m dead serious this time.” She pulled my head to the side and guided her fingers under my chin. I looked into her eyes. “You keep coming up with these excuses of why you’re hurt. You fell, you were in a car accident, and someone broke in your house and beat the shit out of you. I’m not buying them anymore, not that I entirely bought them the first go around. So, I’m putting my foot down this time. You’re going, and you’ll leave in a week. You cannot continue this for any reason.”

The solo tear that fell down her face made my chest ache worse.

“Mom, seriously. I’m a grown adult and have been for quite some time. You can’t just tell me that I’m going and expect me to pack up and leave everything behind.” I knew this would set her off, but having her mad and not crying was better. Call me selfish, but one thing I couldn’t handle was my mom crying.

“To hell I can’t! You’re acting as if something here isn’t seriously wrong. There is no way a woman can have this many accidents in the course of three years. Do you think I haven’t noticed the bruises on you? Or notice the continued claims that nothing happened or that you bumped into the wall? Even though you won’t tell me exactly what’s going on, I’m not stupid, Sadie Grace. The common factor here in the past three years is Rob. If you want to defend him, stick up for him and protect him, I can’t stop you. But I am going to step in and protect you if you’re not going to do it for yourself. I can’t handle another phone call saying you’re hurt. You are going out … of town … indefinitely! No more!”

I wanted to laugh. I didn’t want to protect Rob. I could care less about him. In a perfect world, he would disappear from it, and I could be me again—happy. I loved Mom, Seth, and Macy, and that’s the only reason why I put up with his shit for so long. I had to keep him away from them.

“Mom you can’t force me to go. It won’t change anything anyway. I’m not leaving everything I’ve ever known behind. I can handle this.” In actuality, I knew I couldn’t handle it any more than I could control the weather. As always, Mom knew better, and she was right, I was a stubborn ass.

I’d been trying for years now to figure out how to deal with this mess I got myself in. I was failing miserably. With no one to talk to, I was at a loss—empty, alone. This dark hole was suffocating me. With Rob’s many connections, it was even harder for me to figure out a plan to keep everyone safe.

I wished I could just disappear from the earth, then he would leave all those I loved alone. But those thoughts had long left in the realization that I would miss them too much.

“You can’t handle this. If you don’t go, I will do my damnedest to make sure this whole town knows what’s going on until something is done about it! I’m not going to sit back another minute and wait for another ‘accident’ to happen. I love you, and I’m finished seeing you like this.”

I saw as the tears welling up in her eyes began to fall in earnest. It crushed me to see her cry. She had already been through so much pain. Between my father’s death and my brother’s deployment, she was surrounded by sadness.

I didn’t like seeing her hurt … especially because of me. It just made me angrier at myself. I closed my eyes again, trying to make myself breathe, even though it hurt like a bitch to do.

“Mom, I know you mean well, and I understand your concerns, but I can’t leave.” I heard the solace in my own voice. “Even if you tell someone, they won’t believe you. You know who Rob is,” I whispered and Mom caught right on to my words.

“So, are you telling me that something is going on, Sadie?”

“Mom, just let it go.” I closed my eyes, hoping this conversation would go away. As much as I wanted to talk to her about this, I knew I couldn’t. I had no doubt she would believe me; I just didn’t know what her actions would be. I hadn’t put up with this so long to keep her safe only to have it blow up in my face.

Over the years, Rob drilled in to me that no one would believe me … ever. As a matter of fact, him hitting me in the face repeatedly while telling me this brought the message home clearly.

He continually said no one would see him as a bad guy, while I wanted to yell that he was a complete asshole. He told me he would stop hitting me if I said he was a good guy. I, of course, told him that, even though I didn’t believe for a second that anything I said would stop him.

When the guys from the police station showed up at our house one night to watch the game, I had a beautifully busted fat lip. Thinking they would see this and ask questions, I was blown away by their reaction.

They actually patted Rob on the back and gave him high fives, as Rob explained, in detail, with me in the room, how I couldn’t get off unless he slapped me around and made me bleed.

You should have seen it. I was fucking her hard. She kept yelling at me to just do it. So I slapped her, and she came on the spot.

I tried to convey with my eyes and not words—because I knew better—that it was a lie, but the guys didn’t see it. When one of the guys said, “Oh honey there’s nothing to be embarrassed about, we all like some kink,” I knew they believed Rob and couldn’t see the truth in my eyes. When Rob’s hand came around my waist and gripped tightly, I nodded in agreement, hoping his grip would loosen. One of the guys, Jake, I think, even asked Rob if he could get in a few licks.

My eyes went wide, and I gasped at that comment just praying that Rob wouldn’t allow his buddy to do that to me. Luck must have been on my side at that moment because when he told them, “
Only I get to slap that ass,
” in his masochist way, I actually sagged with relief.

I was both relieved and mortified at the same time. I was actually happy that only Rob could hit me. I never realized how bad I was losing it, but having one is better than many.

After this, the cops wouldn’t believe me. The words Rob used still slithered down me. “
The guys think you like rough kinky sex. The bruises won’t matter
.”

I didn’t believe him at the time, but with the reactions, I knew I was screwed. They thought my battered body was our normal. If I were to tell them what Rob was doing, they would laugh it off just like that day. I had no way out. Even though every part of my body wanted to cry, I would not let the tears escape.

“Sadie, someone will listen. You can’t go through your life like this.” Mom’s voice, desperate and quivering, snapped me back to the present. That strength I admired so much in my mom was breaking and coming undone.

I loved that my mom been my rock and confidant since I was a kid. Telling her almost everything, throughout my life, gave us an intense connection that made me feel as though she was a sister. I couldn’t imagine not being near her; the agony of it tore me up. What if she needed me, I needed to be close. I was all she had here, besides Jackson, her on-again off-again boyfriend. But he hadn’t quite proven this commitment to her yet, and it put me on the fence about my feelings for him.