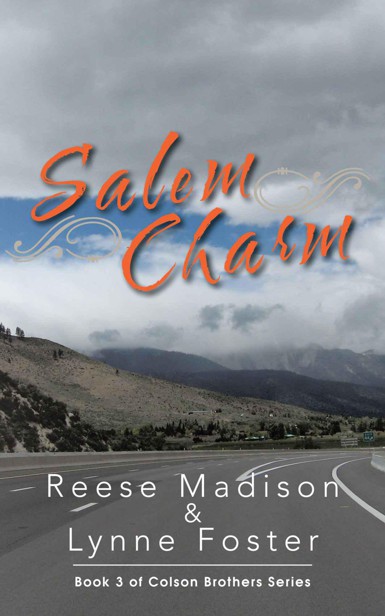 ©
2013 by Reese Madison and Lynne Foster. All rights reserved.

We would like to dedicate this love story to Mr. & Mrs. Louis and Barbara Early. Your love kept us close as a family, and inspired those who knew you to accept nothing less than a true and everlasting love. We miss you more than words can ever express. Lou and Barbara are native North Carolinians who retired in Oriental, NC where their son still resides.

“Are you kidding me? North Carolina? I just got back here!” I complained when Slider gave me the order.
‘Here’ being the Arizona desert. Forty miles east of Phoenix in a small town called Apache Junction to be exact.

“Sorry Bro, but it’s important we get the bitch out of there. Mr. Whitmore, her father, is paying us a hundred thousand dollars to ensure her safety. Some kind of deal went bad sending him into hiding. Now he wants us to get her as far away from the situation as possible.”

“I know I can protect her, it’s what I do. What I
don’t
like is going back into Chardonnay’s territory. If she finds out one of her half brothers is in the house, It’s going to stir up a shit storm.” I told him what he already knows, all too well. She’s his full-blood younger sister, and Turner’s twin sister. Turner is one of the, scratch that, he is the meanest, and probably the biggest, of all us brothers.

“Yeah, I wouldn’t wear your cut once you cross the Mississippi. Do you have an old leather without a patch?”

“Fuck no.” Of course I don’t. I’ve been a member since I was eighteen, almost ten years now. I don’t own another jacket. On the rare occasions I do go back east, I go quickly, and put a plain grey sweatshirt I own over my leather to cover my patch. We’re allowed to do that when the job is considered ‘under cover’, especially outside our territory.

“Go buy one.” Slider waved me off after handing me an envelope. “And hurry up. I want this shit over with.”

“Yeah yeah.” I went through the bar and outside to the parking lot where my large, overpacked, Electra Glide waited for me in all her glory. All she needs is long-legged woman to grace the seat behind me, and I could die a happy man.

It’s been so long since I’ve gotten laid my nuts are turning blue. There’s been no time. I’m a Transporter. I get paid insane amounts of money to get people into hiding. Normally I keep my work on the west side of the Mississippi, but the club could use this chunk of change. The club always needs money. Charities will suck your wallet dry if you let them. Slider’s wife loves charities.

One of Stacy’s girls, Ginger I think is her name, came sauntering over in high heels too tall for such short legs while I geared up for the long ride across country. “Leaving us already Lou?”

“Yes dear, a man has to work for a living you know.” I informed her sarcastically.

“You don’t have to tell me.” She batted her over made up eyelashes at me. “How about a hand job before you go? I’ll give you a special discount…” She asked with an exaggerated, ridiculously fake, flirt.

Ah hell. I’ve been avoiding her all week. I don’t do whores because there’s something fundamentally wrong about paying for sex. At least to me there is. When I’m with a woman I need her to want to be there for me, and not the money.

But a hand job? Well, I guess I can do that. It
has
been a while. “Make it quick.” I reached for my wallet and let her pick out the the price of her service.

The relief of not being sexually pent up set the right tone for the ride across country. I rode hard and fast making the journey in thirty-eight hours or so. I didn’t exactly watch the clock along the way. I rode until I had to sleep and eat, then kept going.

I met my contact, Myles, at a run down gas station just outside of Raleigh, North Carolina. He’s about ten years older than me and looks like a retired Marine. According to my information he’s been the girl’s body guard most of her life. I wonder if he’s a wannabe Marine, or if he actually served.

We shook hands, caught each other up on the case, then I followed him to the plantation where I’m to pick up the girl. Barbara Whitmore. Even the name sounds stuck up.

When I saw the house, excuse me, mansion, I knew I was in for a long ride back with this woman. I bet she’s dumb as an ox and wearing some fancy dress with stupid flowers all over it. She probably squeaks when she walks.

Myles handed me the keys to the Mercedes CLS63 AMG he’d been driving. “I’ll send your bike back on the rails. Slider said he will have it picked it up for you.”

I took the keys and off-loaded my bags to the back seat of the car that costs about as much as I make in half a year. “Thanks. I’ll have to ditch the car along the way. I’ll let you know where to pick it up.”

“No problem, we have about eight of the damn things.” He complained.

“In other words it won’t be missed.” I laughed. Rich people. Imagine, a million dollars in disposable cars. What a waste.

“Not for a while. Mr. Whitmore has always been wealthy, and very protective of Miss Barbara. A couple cars is a small price to pay to keep her safe as far as he’s concerned.” He handed me an envelope. “Mr. Whitmore told me to give you this. I’m sure it’s traveling money.”

I tucked the envelope in my inside jacket pocket. The jacket I begrudgingly picked up at a dealer in Albuquerque. “Not necessary, but I’ll take it.” The real money would have been wired directly to Slider. He’ll take his cut and hand me mine when I get back that way.

Myles laughed, “Come on in so we can retrieve Miss Whitmore. I should warn you, she’s a feisty one.”

“She has no idea what’s going on. As far as she knows her father is still in New York with his latest conquest. She’s not going to want to leave, and if she does, she’ll want to go wherever he is. She tends to think she can fix everything.”

“I beg your pardon??” I stood as Myles finished explaining the presence of who I now know as Mr. Louis Colson. Or Lou, as he has informed me he would prefer to be addressed.

“I’m sorry Miss Barbara, but I have strict orders from your father.” Myles apologized.

Lou looked at Myles, “Do you work for her, or her father?” He asked sharply.

My body guard, and lifelong friend, shot him a dirty look before replying, “Her father.”

“Well then, let’s get on with it.” Lou stepped around
the left side of my desk looking like he was coming for me.

I stepped to the right side trying to escape and put my hand up palm out, “Now look sir, I have no intention of going anywhere with you. If I need protecting I have a perfectly good body guard right here.” I looked at Myles.

Myles shook his head. “Not this time. Lou is the best Miss Barbara, please let him do his job. Your father hired him specifically because he is the best. You know how he is about your safety and well-being.” Myles reminded me.

“No!! I do not feel safe with this…” I looked at Lou again. He’s tall, slender with broad shoulders, and in desperate need of a haircut. “biker.” It was obvious Lou had been riding. Motorcycle gear isn’t all that different than horseback riding gear. His leather is black, where as mine is brown.

Next thing I know Lou lunged, grabbed me around the middle with long fingers, and hoisted me over his shoulder with my rump in the air. “Sorry Barbie, but I have a job to do.” He doesn’t sound sorry one bit.

“Put me down right now minute!!” I can’t believe I’m resorting to yelling. Ladies don’t yell. The Salem Academy For Girls saw that each student conducted herself as a proper lady. I was no different.

He carried me through the house, out the front door, and deposited me harshly in the passenger seat of a familiar Mercedes. He reached across my middle and buckled my belt. His unshaven face is an inch from mine. “Stay.” He ordered.