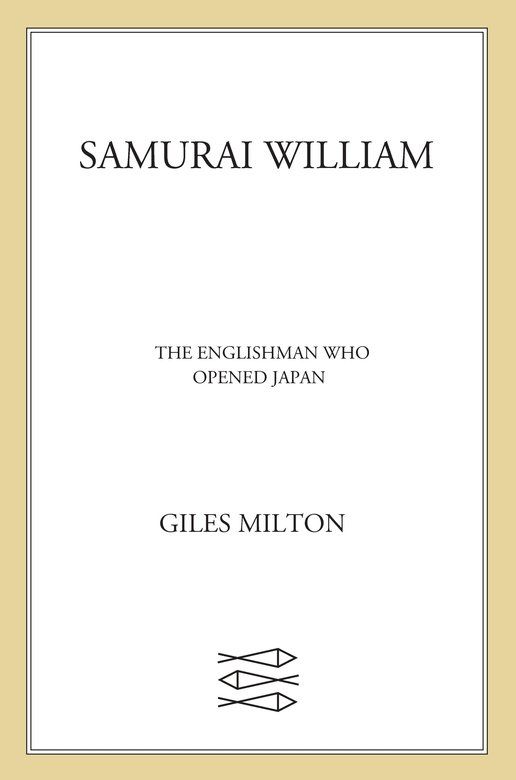 FOR AURELIA
Table of Contents
Title Page
PROLOGUE
Chapter 1
-
AT THE COURT OF BUNGO
Chapter 2
-
ICEBERGS IN THE ORIENT
Chapter 3
-
ALL AT SEA
Chapter 4
-
IN THE NAME OF THE FATHER
Chapter 5
-
SAMURAI WILLIAM
Chapter 6
-
INTO UNKNOWN LANDS
Chapter 7
-
GREETING MR. ADAMS
Chapter 8
-
AT HOME WITH RICHARD COCKS
Chapter 9
-
CLASH OF THE SAMURAI
Chapter 10
-
A QUESTION OF LANGUAGE
Chapter 11
-
KILLED LIKE FISHES
Chapter 12
-
A RUPTURED FRIENDSHIP
Chapter 13
-
LAST ORDERS
A Note on Spelling
ALSO BY GILES MILTON
Notes and Sources
Acknowledgments
Index
Copyright Page
PROLOGUE

T
HEY HAD REACHED the end of the world. A tremendous storm had pushed them deep into the unknown, where the maps and globes showed only monsters of the deep. The night sky sparkled, but the unfamiliar stars had proved a mischievous guide to these lost and lonely adventurers.
For almost two years, William Adams and his crew had braved wild and tempestuous oceans. They had clashed with spear-toting island chieftains, and suffered from sickness and empty bellies. Now, on April 12, 1600, these few survivors had once again sighted land, where they expected death at the hands of barbarous savages.
The bell of the great Manju-ji monastery clanged at dawn. As the weak spring sunlight spilled over the southern mountains, a dozen temples seemed to echo in reply. It was already light on the watery delta of the Oita River, but night still lingered in the palaces and pagodas of Funai. Their cuneiform roofs trapped the
shadows. It would be several hours before daylight pierced the gridlike maze of walkways.
The strange vessel that was drifting helplessly into the harbor was in a terrible state of repair. Her sails were in shreds and her timbers had been bleached by the sun. With her stately poop and mullioned prow, she was quite unlike the junks that occasionally dropped anchor on the southern shores of Japan. No sooner had she been sighted than the alarm was raised and a small party of townsmen rowed out to view the vessel. Those who clambered aboard were greeted by a pitiful sight. A dozen adventurers lay helpless and groaning in their own filth. Many were covered in blotches—a sign of advanced scurvy—while others had been stricken with terrible tropical diseases. Their victuals had run out long ago and they had subsisted on the rats and other vermin that scavenged for scraps in the filthy swill in the hold of the vessel. Only William Adams was sufficiently coherent to greet the boarding party. He blinked in astonishment as he caught his first glimpse of a civilization that was older—and perhaps more sophisticated—than his own.
Adams immediately realized that these men had come not to their rescue, but to pillage the ship. He could only hope that he and his men would receive a welcome on shore. They had achieved the remarkable feat of crossing both the Atlantic and Pacific Oceans, negotiating the treacherous Magellan Straits en route. They had survived Antarctic blizzards and tropical storms, and had watched in horror as their friends and fellow crewmates had weakened and expired. Of a fleet of five ships, only one had made it to Japan. Of an estimated one hundred crew members, just twenty-four men were still alive. Of these, six were on the verge of death.
After more than nineteen months at sea, Adams had reached the fabled island of Japan, where no Englishman had ever before set foot. As he stepped ashore, he prayed that his voyage of discovery
had at long last come to an end. In fact, it was just about to begin.
The adventurers of Elizabethan London knew almost nothing about Japan. When they unrolled their maps and gazed at the remote East, they saw only squiggles, dots, and grotesque sea monsters. Gerardus Mercator’s 1569 map of the world depicted this kingdom as a lozenge-shaped blob with two tentacles of islands. Edward Wright’s projection was little better. When he came to draw Japan, he delved deep into his imagination and came up with an island that looked like a misshapen prawn with a long fluffy beard. Although he took great pride in labeling his map “a true hydrographical description,” he admitted that he had only accurately drawn “so much of the world as hath been hitherto discovered.” That—alas—did not include Japan.
The bookish gentlemen elsewhere in northern Europe were equally ignorant as to the whereabouts, and people, of Japan. In the Low Countries, France, and the Holy Roman Empire the only information about this mysterious “kingdom” was to be found in the account of the great Venetian traveler Marco Polo. That was already three centuries old and was based on nothing more than hearsay. Polo himself had never been to Japan—a land he called Chipangu—but he had learned from the Chinese that the “people are white, civilised and well-favoured” and he noted that they were ferociously proud and “dependent on nobody.” He added that no one—not even their neighbors the Chinese—dared to sail to Japan, for the distances were enormous and the dangers were great.
Forbidden kingdoms made for rich kingdoms in the minds of gentlemen adventurers, and distant Japan—the Land of the Rising Sun—was believed to glisten with gilded splendor. “The quantity of gold they have here is endless,” wrote an excited Polo, “for they
find it in their own islands.” The emperor’s palace was “entirely roofed with fine gold,” while the windows glittered and twinkled, “so that altogether the richness of the palace is past all bounds and all belief.”
Dozens of English adventurers were lured into uncharted seas by such tantalizing riches, placing their trust in the good Lord and a fair breeze. They studied their maps, consulted their charts, and concluded—quite logically—that the frosty Arctic Ocean offered the shortest route to the East. They little imagined that their fragile galleons would be battered by monstrous icebergs and translucent cliffs of ice. Sir Hugh Willoughby’s 1553 expedition to the East had been the most spectacular failure. His vessel had been trapped in the icy jaws of the White Sea, to the north of Muscovy, and his men had frozen to death in an Arctic blizzard.

Inaccurate maps were the cause of many shipwrecks. This circa 1596 Dutch engraving, described by one captain as “very true,” reproduces the prawn-shaped coastline of earlier charts.
The Northwest Passage across the top of North America was believed to offer an even shorter route to Japan and China. But it, too, had displayed a voracious appetite for Elizabethan sea dogs. The route, wrote the Arctic adventurer George Beste, was so “freezing cold [that] not only men’s bodies, but also the very lines and tackling are frozen.” The seas were choked with ice even in midsummer, for tremendous storms would crack the polar ice cap and fling mountainous cliffs into the paths of their wooden vessels. “The ice enclosed us,” wrote the mariner on one expedition, “that we could see neither land nor sea.”
George Beste urged his countrymen on in their endeavors to reach the East, encouraging them with the lure of unimaginable wealth: “Whole worldes offer and reach out themselves to them that will first vouchsafe to possess, inhabit and till them.” The riches of the world were there for the taking in the sixteenth century, and there were vast tracts of ocean that had never been crossed. “Yea, there are countreys yet remaining without masters and possessors, which are fertile to bring forth all manner of corne and grayne.” Beste might have displayed slightly less enthusiasm had he known the perils of tropical seas. Elizabethan galleons were frail and entirely dependent on the whim of the winds and the swirl of the currents. There were no charts of the shoals and sandbanks of the East China Sea, and the mysterious island of Japan was said to be surrounded by unpredictable storms that swallowed ships with one watery gulp.
Portugal’s plucky adventurers had proved rather more adept than their English counterparts at sailing to the farthest East. They had first rounded Africa’s Cape of Good Hope in 1488, nudging their carracks into the uncharted waters of the Indian Ocean. They reached India just ten years later and, by 1511, had captured the Malay port of Malacca. Pushing farther and farther east, they
conducted a covert trade in the coastal waters of China, trading silks and porcelains with Ming dynasty merchants. But as they rounded the plump underbelly of this great empire, they faltered and lost heart. Their resources were limited and their manpower was stretched. They were already operating in frontier territories, at the very limits of their capabilities, and they chose to go no farther.
More than thirty years would pass before the fearsome tropical winds carried the first foreigners to Japan. They would find themselves in a land that was unlike any other. There were ascetic monks and perfumed courtiers, exquisite palaces and lacquered temples. These newly arrived adventurers were stunned to discover that the Japanese indulged in leisure pursuits of the utmost refinement and had a system of ceremonial etiquette that was as complex as it was baffling.
Yet there was a dark side to this ancient civilization. Feudal lords and their armies fought battles on a scale unknown in Europe. The theater of war involved hundreds of thousands of warriors, and vanquished armies would commit ritual suicide rather than face the ignominy of surrender. Here, at the farthest end of the world, lay an enchanted but deeply melancholic land.
The story of Samurai William is one of the most remarkable of the Jacobean age. It tells of a civilization more sophisticated than anyone had previously dreamed of discovering, yet one that was to be rent asunder by conflicts manipulated by Europeans. It begins in 1544—almost sixty years before William Adams arrived in the Land of the Rising Sun—when the blustery monsoon caught the sails of a junk that carried a little band of Portuguese merchants. Their vessel had been blown far across the East China Sea until at last they caught sight of the forested island of Kyushu in southwestern Japan. So it was that, in 1544, three Portuguese adventurers stepped ashore in the ancient fiefdom of Bungo.

March Toward the Thunder by Joseph Bruchac
The Little Red Chairs by Edna O'Brien
A este lado del paraíso by Francis Scott Fitzgerald
What Happens at the Beach... by T A Williams
Unforgiven (The Forbidden Bond 2) by Cat Miller
The Fairy Letters: A FROST Series(TM) Novel by Gow, Kailin
Sons of Amber: Michael by Bianca D'Arc
Waco's Badge by J. T. Edson
The Sword And The Pen by Hendricks, Elysa
December Rain by A. L. Goulden
Our partner