Read Scarlet in the Snow Online

Scarlet in the Snow 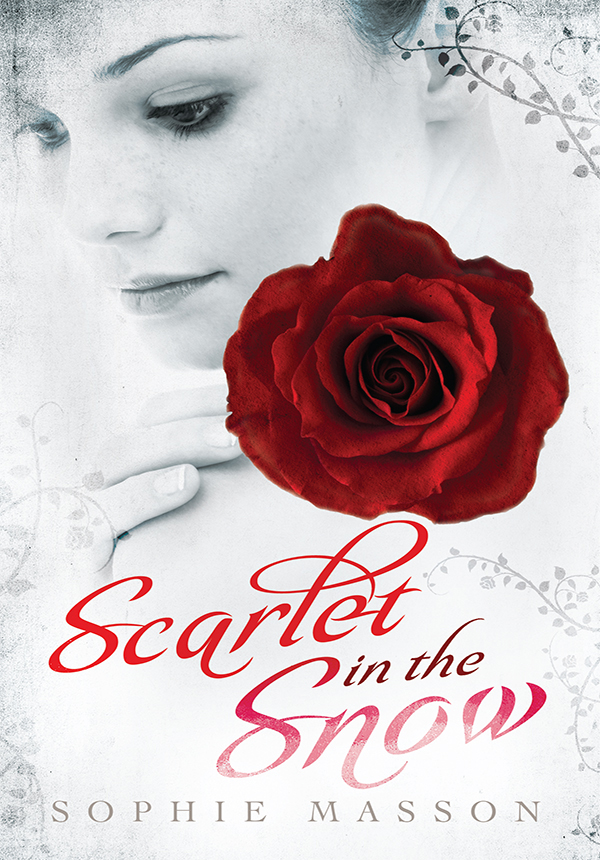 When Natasha is forced to shelter from a blizzard, she is lucky to see a mansion looming out of the snow. Inside, it is beautiful – except, instead of paintings, there are empty frames on every wall. In the snowy garden, she finds one perfect red rose in bloom. Dreamily she reaches out a hand . . .

Only to have the terrifying master of the house appear, and demand vengeance on her for taking his rose.

So begins an extraordinary adventure that will see Natasha plunged deep into the heart of a mystery, as she realises she has stumbled upon a powerful sorcerer’s spell of revenge.

But even if she can break the spell, the Beast she has come to love will be snatched from her. Natasha will have a long journey ahead before there can be a happy ending. 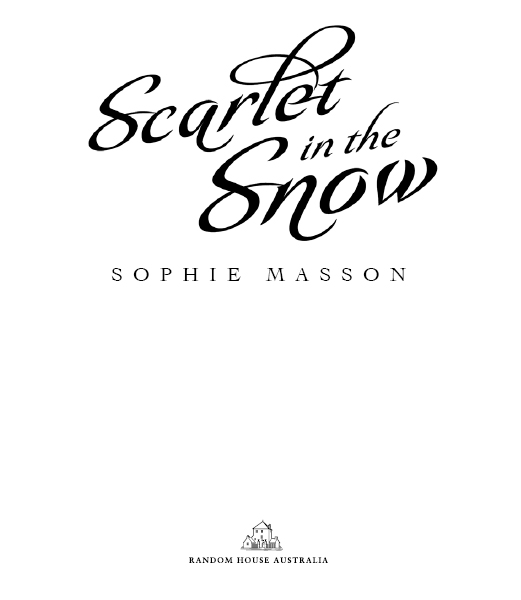 ‘Ah, there you are! I might have known I’d find you up here, scribbling like some old clerk. Look at you – you’ve got ink all over your fingers! No, stop, don’t do that, Natasha, you’ll get it on your nose too!’

Too late. The tip of my nose was already graced with a blotch. I hurriedly closed my notebook and pushed it
under the pile of old blankets. Scrubbing half-heartedly at the nose-blotch with a crumpled handkerchief, I said, ‘What’s the matter, Liza? Is the house on fire? Have the horses run away? Are the hens off their lay? No, wait; it must be something much more important. I know. Anya’s run out of hair-curling papers!’

‘Ha ha, very funny,’ she said sourly. ‘Don’t you remember? Your godfather’s coming to tea. And he’s due in less than an hour.’

‘And you came bursting in here to tell me
that
?’ I hadn’t forgotten. I just hadn’t wanted to think about it. I don’t like my godfather, Captain Peskov. With his cold beady eyes and his spindly legs in their dusty black trousers, he reminds me of a bedraggled elderly crow. And as for his title, I cannot believe he’s ever been captain of anything other than the good ship
Misery
, for he is for ever croaking about this or that unpleasant and miserable thing, usually how someone had cheated him of what was rightfully his. He’s some kind of distant cousin of my father’s, but aside from that I don’t know why he was chosen as my godfather. He’s a real
skupoy
, a real stingy person, and he’s certainly never taken an interest in me. Now, though, I can’t help thinking that my poor papa must have owed him money and by asking him to be my godfather, was trying to get on his good side. But I don’t think that side exists.

‘Why on earth is he bothering to visit us now, when he didn’t even come to Papa’s funeral and hasn’t sent so much as a note since?’ I said scornfully.

Shrugging, Liza pushed back a stray strand of her fair hair. ‘Maybe he’s had a change of heart and he’s decided to help us.’

I laughed. ‘A change of heart? He doesn’t
have
a heart to change, Liza. That old
skupoy
might be rich but he’s also a real miser and you know it. His purse strings are so tight you’d need a crowbar to open them and even then they’d probably stay shut.’

‘You have to be nice to him,’ she said, ignoring my comment. ‘Mama says you must. She says it’s our only chance.’

I stared at her. ‘Mama said that?’

She had the grace to flush. ‘All right, not the last bit she didn’t. But she did say you should be nice, so it must mean she thinks that.’

‘No, it doesn’t,’ I began hotly, and then I cut myself short. Because I know how hard it’s been for Mama these last eighteen months. It’s not just the grief at losing Papa, not just the loss of our old life, not just the constant money worries that have put grey streaks in her black hair and dark shadows under her green eyes. It’s also knowing what it all means for us, for her daughters. Balls, parties, fine dresses, costly jewels, city living, high society, romance, hopes for a glittering marriage to an important nobleman: all that belongs to dreams of the past now. To be honest, that side of it didn’t worry me, like it worried my older sisters. Anya had been the belle of the Summer Palace Ball and Liza had just made her own entry into society only a few weeks before Papa died and the true state of our finances was revealed. But back then, at fifteen I’d still
been too young for all that. You can’t miss what you’ve never known. And probably now would never know.

But I lost no sleep over that, or even over the loss of our beautiful city mansion, and everything in it, to pay the enormous debts Papa had left behind. Our country house, which had once belonged to Mama’s father, was much smaller than the Byeloka mansion, but it was cosy and homely, with ample space for us all. We had plenty to eat too, for we had cows, chickens, a vegetable garden, an orchard, a fish-filled stream, and mushrooms and berries in the woods. It was true we only had one house-servant now instead of the flock we’d had before, and we’d all had to learn to do our own hair and look after our own clothes and sometimes lend a hand to Sveta in the house or with the chickens, and help Oleg and Vanya, who look after the garden and the cows. My sisters minded terribly, but I didn’t. It was a small enough thing to do for Mama, who works so hard, sometimes long hours into the night, even in winter when her studio in the garden is so cheerless.

Truth is, I miss my father, but I don’t miss society. I find the whole notion of it suffocating, with its gossip and matchmaking and rules for young ladies. Occasionally, we’re invited to village dances, and though my sisters moan about what country-bumpkin affairs they are, with farmers and local gentry noisily mixing, I enjoy them much more than I’d have enjoyed Byeloka balls. But even more than that, I love the freedom I have here, where you can run barefoot in long summer grass or whoop as you race a sleigh across snowy fields, or get ink on your fingers and nose, and nobody cares. Nobody, that is, apart from my
sisters. I don’t share their feelings, but I understand them and love them. And especially I love my mother dearly and would do anything to put the sparkle back in her eye. So if Liza’s right and by some miracle the stingy old Captain might be persuaded to help us and lighten Mama’s burden, then for her sake I should pretend I’m glad to see him.

I sighed. ‘I suppose this means we’d better look our best. Do you think my brown velvet would do?’

Liza’s blue eyes widened in surprise. She’s not used to me being biddable, still less asking her advice. But she soon recovered. ‘What, that old thing? Certainly not. The sleeves will be too short; you’ll look like a clown in it.’

‘Then it will go nicely with my ink-blot nose,’ I said flippantly, but Liza wasn’t amused.

‘Stop being silly, Natasha, and come with me. We have to ask Anya what she thinks.’

I groaned inwardly. I could see that I was in for a long and tedious session of parading in front of the mirror, but I could also see that I’d have to put up with it.

It took even longer than I thought, because Anya wasn’t in a good mood. She’d found a tiny pimple on her normally flawless creamy skin, and her sea-green eyes were stormy with irritation as she dabbed at it with powder. Liza usually humours her, but today she was impatient. ‘For heaven’s sake, we don’t have time for this! Anya, you look beautiful, you always do!’ She stroked Anya’s black ringlets. ‘But if the Captain claps eyes on Natasha in that shabby old velvet, he’ll change his mind about making her his heiress and then we’ll be stuck here for ever.’

I couldn’t understand how she’d gone from the faint hope that he might help us to the ridiculous fantasy that the old miser would make me his heiress, and I nearly laughed aloud, but stopped myself in time. Turning to my eldest sister, I said solemnly, ‘That’s right. And you’re so good at understanding these things, Anya. You have such a fine eye for clothes and what they say about people.’

She gave me a hard look. No wonder. It’s not exactly the sort of thing I’m in the habit of saying. But like Liza she recovered quickly enough, saying, rather ungraciously, ‘Oh, very well.’ She looked at me critically. ‘Hmm. Now let me see . . .’

Although it was autumn and there was a definite bite in the air, in the house, with the blue and white stove burning cheerfully, it was very warm. So between them Anya and Liza decided that given the regrettable fact my face and neck still bore traces of a summer tan like a peasant girl’s, and the less regrettable fact that my brown hair was still sheened with summer gold, I could play the part of the fresh-faced country maiden in a light flowery dress that would make the old miser think of spring. ‘And as everyone knows,’ said Anya, ‘the thought of spring makes you happy, and happiness makes you generous.’

Slave Lover by Marco Vassi
A Matter of Class by Mary Balogh
Hell, Fire & Freedom (Fighting for Freedom) by Callahan, Shannon
The Academy by Ridley Pearson
Alice + Freda Forever: A Murder in Memphis by Alexis Coe
Hart of the Matter (A Love of the Game Novella) by McClendon, Shayne
Vendetta in Death by J. D. Robb
Once in Europa by John Berger
No Beast So Fierce by Edward Bunker
The Wicked and the Wondrous by Christine Feehan
Our partner