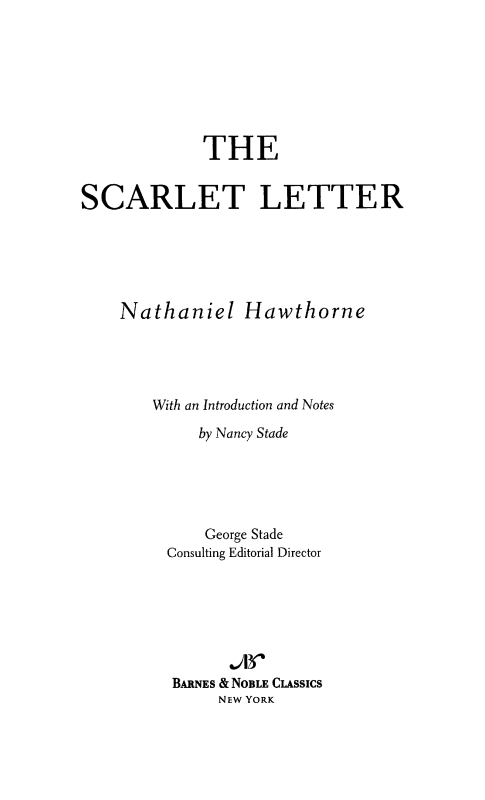 Table of Contents
FROM THE PAGES OF
Title Page
Copyright Page
NATHANIEL HAWTHORNE
THE WORLD OF NATHANIEL HAWTHORNE AND THE SCARLET LETTER
Introduction
PREFACE TO THE SECOND EDITION
THE CUSTOM-HOUSE
I - The Prison-Door
II - The Market-Place
III - The Recognition
IV - The Interview
V - Hester at Her Needle
VI - Pearl
VII - The Governor’s Hall
VIII - The Elf-Child and the Minister
IX - The Leech
X - The Leech and His Patient
XI - The Interior of a Heart
XII - The Minister’s Vigil
XIII - Another View of Hester
XIV - Hester and the Physician
XV - Hester and Pearl
XVI - A Forest Walk
XVII - The Pastor and His Parishioner
XVIII - A Flood of Sunshine
XIX - The Child at the Brook-Side
XX - The Minister in a Maze
XXI - The New England Holiday
XXII - The Procession
XXIII - The Revelation of the Scarlet Letter
XXIV - Conclusion
ENDNOTES
INSPIRED BY THE SCARLET LETTER
COMMENTS & QUESTIONS
FOR FURTHER READING
FROM THE PAGES OF
THE SCARLET LETTER
She took the baby on her arm, and, with a burning blush, and yet a haughty smile, and a glance that would not be abashed, looked around at her townspeople and neighbours. On the breast of her gown, in fine red cloth, surrounded with an elaborate embroidery and fantastic flourishes of gold thread, appeared the letter A.
(page 46)
It had the effect of a spell, taking her out of the ordinary relations with humanity, and inclosing her in a sphere by herself.
(page 46)
“Up to that epoch of my life, I had lived in vain. The world had been so cheerless! My heart was a habitation large enough for many guests, but lonely and chill, and without a household fire. I longed to kindle one! It seemed not so wild a dream.”
(page 63)
There is a fatality, a feeling so irresistible and inevitable that it has the force of doom, which almost invariably compels human beings to linger around and haunt, ghost-like, the spot where some great and marked event has given color to their lifetime; and still the more irresistibly, the darker the tinge that saddens it.
(page 67)
Her matronly fame was trodden under all men’s feet. Infamy was babbling around her in the public market-place. For her kindred, should the tidings ever reach them, and for the companions of her unspotted life, there remained nothing but the contagion of her dishonor; which would not fail to be distributed in strict accordance and proportion with the intimacy and sacredness of their previous relationship.
(page 98)
And now, through the chamber which these spectral thoughts had made so ghastly, glided Hester Prynne, leading along little Pearl, in her scarlet garb, and pointing her forefinger, first, at the scarlet letter on her bosom, and then at the clergyman’s own breast.
(page 121)
“Let the black flower blossom as it may!”
(page 144)
Let men tremble to win the hand of woman, unless they win along with it the utmost passion of her heart!
(page 146)
The scarlet letter was her passport into regions where other women dared not tread. Shame, Despair, Solitude! These had been her teachers, —stern and wild ones,—and they had made her strong, but taught her much amiss.
(page 165)
All this time, Roger Chillingworth was looking at the minister with the grave and intent regard of a physician towards his patient. But, in spite of this outward show, the latter was almost convinced of the old man’s knowledge, or, at least, his confident suspicion, with respect to his own interview with Hester Prynne. The physician knew, then, that, in the minister’s regard, he was no longer a trusted friend, but his bitterest enemy.
(page 184)
At some brighter period, when the world should have grown ripe for it, in Heaven’s own time, a new truth would be revealed, in order to establish the whole relation between man and woman on a surer ground of mutual happiness.
(page 215) 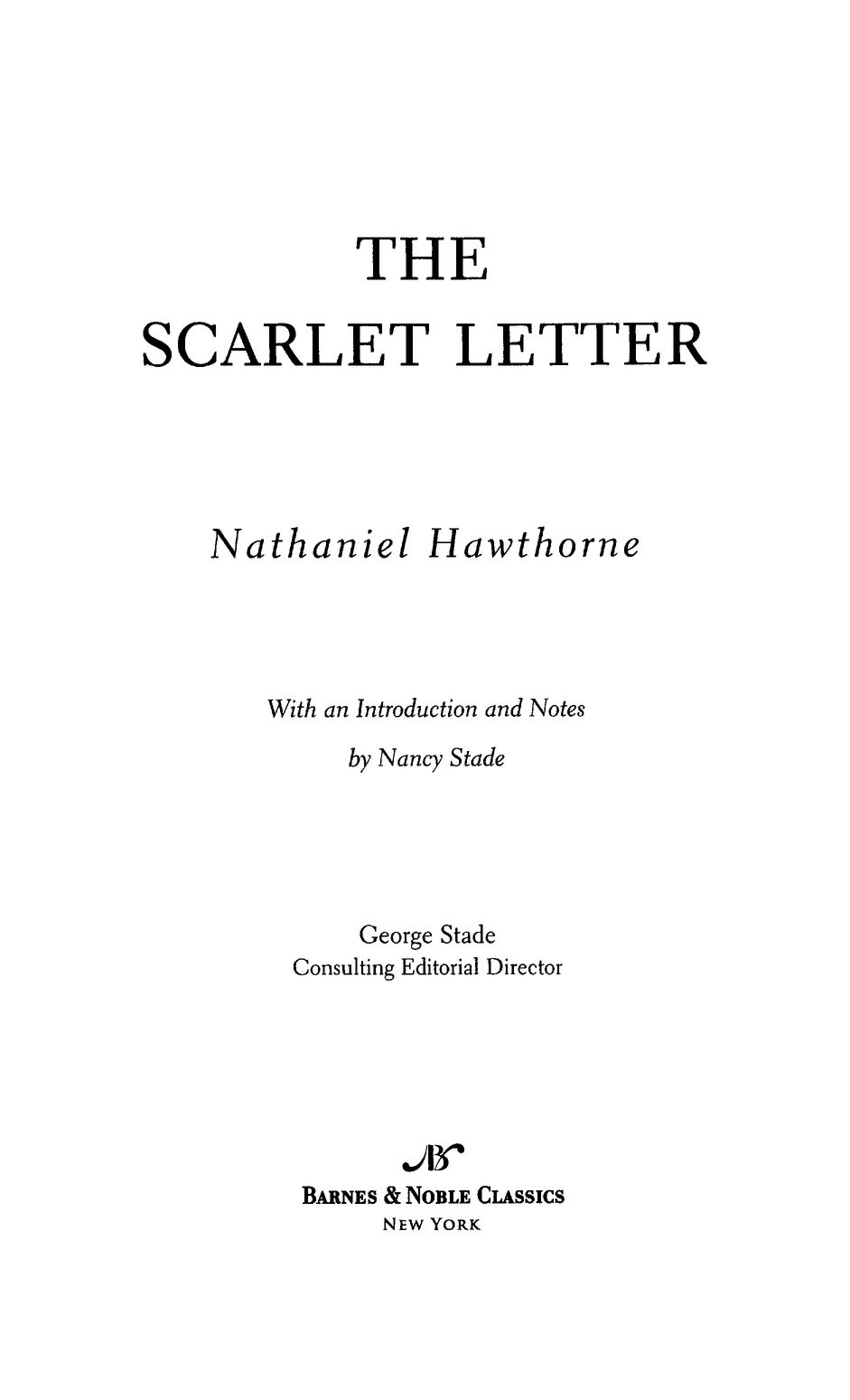 Published by Barnes & Noble Books
122 Fifth Avenue
New York, NY 10011
www.barnesandnoble.com/classics
The Scarlet Letter
was first published in 1850.
Originally published in mass market format in 2003 by Barnes & Noble Classics
with new Introduction, Notes, Biography, Chronology,
Inspired By, Comments & Questions, and For Further Reading.
This trade paperback edition published in 2005.
Introduction, Notes, and For Further Reading
Copyright © 2003 by Nancy Stade.
Note on Nathaniel Hawthorne, The World of Nathaniel Hawthorne and
The Scarlet Letter,
Inspired by
The Scarlet Letter,
and Comments & Questions
Copyright @ 2003 by Barnes & Noble, Inc.
All rights reserved. No part of this publication may be reproduced or
transmitted in any form or by any means, electronic or mechanical,
including photocopy, recording, or any information storage and
retrieval system, without the prior written permission of the publisher.
Barnes & Noble Classics and the Barnes & Noble Classics
colophon are trademarks of Barnes & Noble, Inc.
The Scarlet Letter
ISBN-13: 978-1-59308-207-9 ISBN-10: 1-59308-207-X
eISBN : 978-1-411-43309-0
LC Control Number 2004102196
Produced and published in conjunction with:
Fine Creative Media, Inc.
322 Eighth Avenue
New York, NY 10001
Michael J. Fine, President and Publisher
Printed in the United States of America
QM
9 10
NATHANIEL HAWTHORNE
Nathaniel Hathorne, Jr., was born into an established New England Puritan family on Independence Day, 1804, in Salem, Massachusetts. After the sudden death of his father, he and his mother and sisters moved in with his mother’s family in Salem. Nathaniel’s early education was informal; he was home-schooled by tutors until he enrolled in Bowdoin College in Brunswick, Maine.
Uninterested in conventional professions such as law, medicine, or the ministry, Nathaniel chose instead to rely “for support upon my pen.” After graduation, he returned to his hometown, wrote short stories and sketches, and changed the spelling of his surname to “Hawthorne.” Hawthorne’s coterie consisted of transcendentalist thinkers, including Ralph Waldo Emerson and Henry David Thoreau. Although he did not subscribe entirely to the group’s philosophy, he lived for six months at Brook Farm, a cooperative living community the transcendentalists established in West Roxbury, Massachusetts.
On July 9, 1842, Hawthorne married a follower of Emerson, Sophia Peabody, with whom he had a daughter, Una, and a son, Julian. The couple purchased a mansion in Concord, Massachusetts, that previously had been occupied by author Louisa May Alcott. Frequently in financial difficulty, Hawthorne worked at the custom houses in Salem and Boston to support his family and his writing. His peaceful life was interrupted when his college friend, Franklin Pierce, now president of the United States, appointed him U.S. consul at Liverpool, England, where he served for four years.
Herman Melville had an early appreciation for the work of Hawthorne, but he did not gain wide public recognition until after his death. Early in his career, Hawthorne attempted to destroy all copies of his first novel,
Fanshawe
(1828), which he had published at his own expense. During this period he also contributed articles and short stories to periodicals, several of which were published in his first collection,
Twice-Told Tales
(1837). Although his works met with little financial success, Hawthorne is credited, along with Edgar Allan Poe, with establishing the American short story.
The publication of
The Scarlet Letter
in 1850 changed the way society viewed Puritanism. Considered his masterpiece, the novel focuses on Hawthorne’s recurrent themes of sin, guilt, and punishment. Some critics have attributed his sense of guilt to his ancestors’ connection with the persecution of Quakers in seventeenth-century New England and their prominent role in the Salem witchcraft trials in the 1690s.
On May 19, 1864, Hawthorne died in Plymouth, New Hampshire, leaving behind several unfinished novels that were published posthumously. He is buried at Sleepy Hollow Cemetery in Concord, Massachusetts.
THE WORLD OF NATHANIEL HAWTHORNE AND
THE SCARLET LETTER

My First New York by New York Magazine
Starship Fall by Eric Brown
The Huntress: Becoming a Huntress by Mihaela Gheorghe
Just a Number (Downtown #1) by Fifi Flowers
Shooting On the Strip by Selena Cooper
Old Mr. Flood by Joseph Mitchell
Plague: Death was only the beginning! by Donald Franck, Francine Franck
Strangers in the Night by Patricia H. Rushford
Gail Eastwood by A Perilous Journey
A Father's Love by Lorhainne Eckhart
Our partner