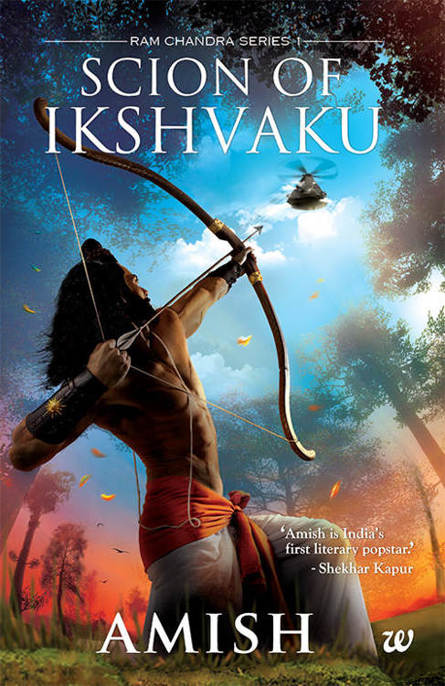 Amish
is a 1974-born, IIM (Kolkata)-educated, boring banker turned happy author. The success of his debut book,
The Immortals of Meluha
(Book 1 of the Shiva Trilogy), encouraged him to give up a fourteen-year-old career in financial services to focus on writing. He is passionate about history, mythology and philosophy, finding beauty and meaning in all world religions.

Amish lives in Mumbai with his wife Preeti and son Neel.

‘I wish many more would be inspired by Amish Tripathi...’

‘Amish’s mythical imagination mines the past and taps into the possibilities of the future. His book series, archetypal and stirring, unfolds the deepest recesses of the soul as well as our collective consciousness.’

‘Amish is a fresh new voice in Indian writing – steeped in myth and history, with a fine eye for detail and a compelling narrative style.’

‘…Amish has mastered the art of gathering, interpreting and presenting India’s many myths, folklores and legends, and blending all of that into fast-paced thrillers that change your views about Gods, cultures, histories, demons and heroes, forever.’

‘Amish’s philosophy of tolerance, his understanding of mythology and his avowed admiration for Shiva are evident in his best-selling works.’

‘Tripathi is part of an emerging band of authors who have taken up mythology and history in a big way, translating bare facts into delicious stories.’

‘…one must congratulate Amish on reintroducing Hindu mythology to the youth of this country.’

Amish Tripathi asserts the moral right to be identified as the author of this work.

This is a work of fiction. Names, characters, places and incidents are either the product of the author’s imagination or are used fictitiously and any resemblance to any actual person living or dead, events and locales is entirely coincidental.

This book is sold subject to the condition that it shall not, by any way of trade or otherwise, be lent, resold, hired out, or otherwise circulated without the author’s prior written consent, in any form of binding or cover other than that in which it is published and without a similar condition including this condition being imposed on the subsequent purchaser and without limiting the rights under copyright reserved above, no part of this publication may be reproduced, stored in or introduced into a retrieval system, or transmitted in any form or by any means (electronic, mechanical, photocopying, recording or otherwise), without the prior written permission of the copyright owner, except in the case of brief quotations embodied in critical articles or reviews with appropriate citations.

To my father, Vinay Kumar Tripathi,

and my mother, Usha Tripathi

Khalil Gibran said that parents are like a bow,

The more the bow bends and stretches, the farther the arrow flies.

I fly, not because I am special, but because they stretched for me.

The universe bows to Lord Shiva.

I bow to Lord Shiva.

You live in Ram’s kingdom, hold your head high.

Fight for justice. Treat all as equal.

Protect the weak. Know that dharma is above all.

You live in the kingdom of Ram.

Arishtanemi:
Military chief of the Malayaputras; right-hand man of Vishwamitra

Ashwapati:
King of the north-western kingdom of Kekaya; a loyal ally of Dashrath; father of Kaikeyi

Dashrath:
The Chakravarti king of Kosala and emperor of Sapt Sindhu; husband of Kaushalya, Kaikeyi and Sumitra; father of Ram, Bharat, Lakshman, and Shatrughan

Janak:
King of Mithila; father of Sita and Urmila

Jatayu:
A captain of the Malayaputra tribe; a Naga friend of Sita and Ram

Kaikeyi:
Daughter of King Ashwapati of Kekaya; second and the favourite wife of Dashrath; mother of Bharat

Kaushalya:
Daughter of King Bhanuman of South Kosala and his wife Maheshwari; the eldest queen of Dashrath; mother of Ram

Kubaer:
Trader and ruler of Lanka before Raavan

Kumbhakarna:
Raavan’s brother; he is also a Naga (a human being born with deformities)

Lakshman:
One of the twin sons of Dashrath; born to Sumitra; faithful to Ram; later married to Urmila

Malayaputras:
The tribe left behind by Lord Parshu Ram, the sixth Vishnu

Manthara:
The richest merchant of Sapt Sindhu; an ally of Kaikeyi

Mrigasya:
General of Dashrath’s army; one of the nobles
of Ayodhya

Nagas:
A feared race of human beings born with deformities

Nilanjana:
Lady doctor attending to members of the royal family of Ayodhya, she hails from South Kosala

Raavan:
King of Lanka; brother of Vibhishan, Shurpanakha and Kumbhakarna

Ram
: Eldest of four brothers, son of Emperor Dashrath of Ayodhya (the capital city of Kosala kingdom) and his eldest wife Kaushalya; later married to Sita

R
oshni:
Daughter of Manthara; a committed doctor and
rakhi
-sister to the four sons of Dashrath

Shatrughan:
Twin brother of Lakshman; son of Dashrath and Sumitra

Sumitra:
Daughter of the king of Kashi; the third wife of Dashrath; mother of the twins Lakshman and Shatrughan

Vashishta:
Raj guru, the royal priest of Ayodhya; teacher of the four princes

Vayuputras:
The tribe left behind by Lord Rudra, the previous Mahadev

Vishwamitra:
Chief of the Malayaputras, the tribe left behind by Lord Parshu Ram, the sixth Vishnu; also temporary guru of Ram and Lakshman

Urmila:
Younger sister of Sita; the blood-daughter of Janak; she is later married to Lakshman

The B Girls by Cole, Cari
The Woman from Kerry by Anne Doughty
The Librarian Principle by Helena Hunting
Babylon by Camilla Ceder
Fallen: Angels in the Dark by Kate, Lauren
Timekeeper by Monir, Alexandra
Death by Chocolate Sundae: A Cozy Mystery (Caesars Creek Mystery Series Book 2) by Constance Barker
Seducing Eve (Guardians of Atlantis) by Miles, Michelle
Surviving The Zombie Apocalypse (Book 2): Conflict by Scott, Joshua Jared
My Most Excellent Year by Kluger, Steve
Our partner