Sea Bride- Children of the Waves 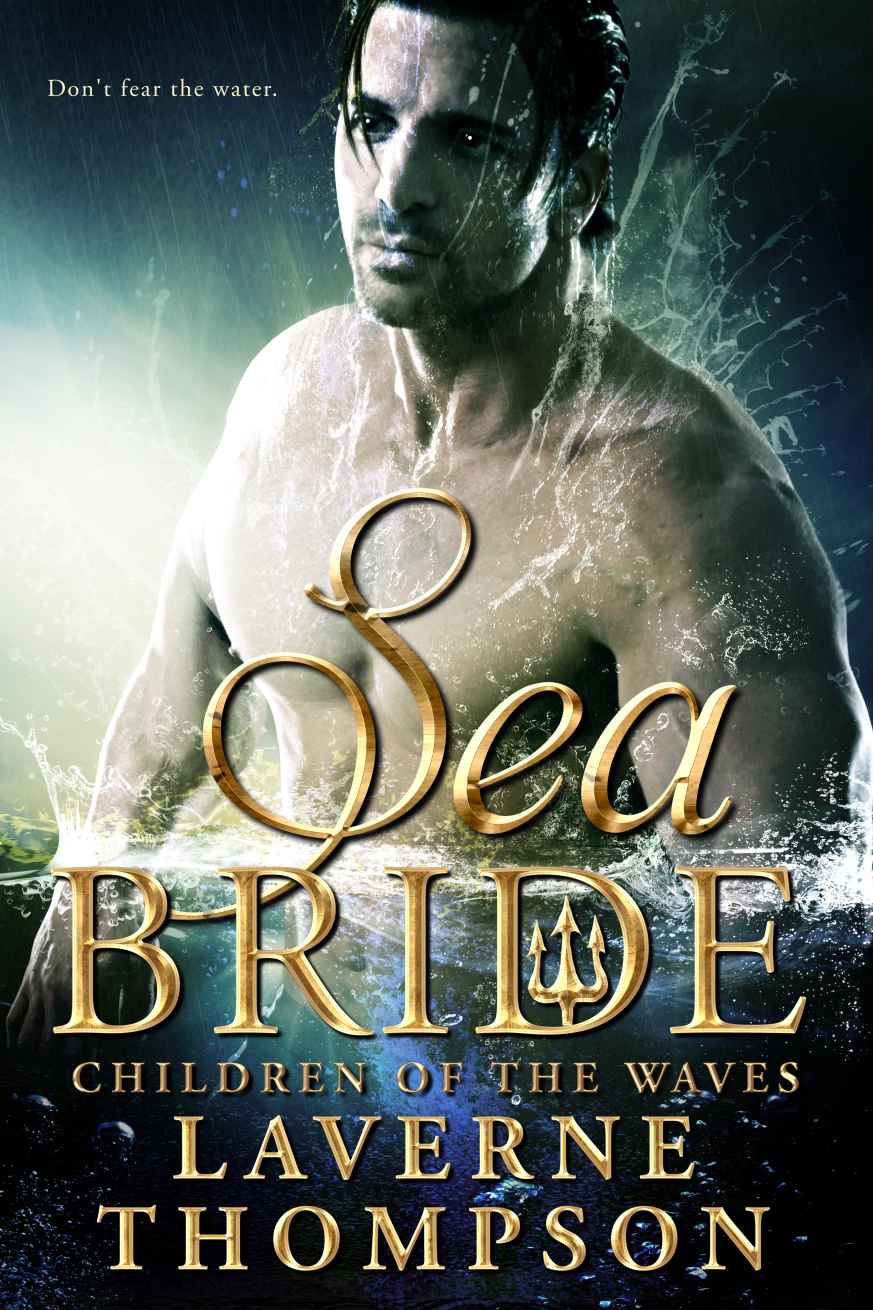 Children of the Waves

The
unauthorized reproduction or distribution of this copyrighted work is illegal.
Criminal copyright infringement (including infringement without monetary gain)
is investigated by the FBI and is punishable by up to 5 years in federal prison
and a fine of $250,000.

Please
purchase only authorized electronic editions and do not participate in, or
encourage, the electronic piracy of copyrighted materials. Your support of the
author’s rights is appreciated.

This book is a work of fiction. Names,
characters, places, and incidents either are products of the author’s
imagination or are used fictitiously. Any resemblance to actual events or
locales or persons, living or dead, or other status is entirely coincidental.

All rights reserved, including the right
to reproduce this book or portions thereof in any form whatsoever known, not
known or hereafter invented, or stored in any storage or retrieval system, is
forbidden and punishable by the fullest extent of the law without written
permission of the author. LaVerne Thompson. [email protected]

This book was first published 2012 by another
publisher

Because I love the sea
this is for all those who love it too and who have lost loved ones to its
power.

Sea Bride was originally
published by another publisher, that was kind enough to return my rights, so I
might publish the Children of the Waves series as an independent. Thank you for
your support.

The little girl yelled chasing
her dog over the rocky beach, her sneaker-clad feet giving her traction. When
she climbed over the dune, she paused.

The little brown and white dog
sat in front of something on the wet sand, near the water’s edge. Coco’s head
turned back and forth from the lump beside her to her mistress.

The child drew closer and she
saw the mass was an older boy, lying on his back. Blood trickled down the side
of his face from a gash above his eye. He lay shirtless, with tight-fitting
black swimming trunks clinging to his bare legs.

Coco yipped, leapt up and raced
by the boy’s head, then licked his sandy face, but he didn’t respond.

The girl knelt by his side and
shook his slender tanned shoulder. “Boy, boy you okay? Wake up. What should we
do, Coco?” The little girl asked her dog, looking around with uncertainty. She
grabbed her pet, hugging him to her chest. This early in the morning, she was
the only one on the sandy beach. “I don’t want to leave him here, but I’ve got
to go get Daddy.” Her slender body trembled in fear.

Just as she stood up to run
back to the beach house to fetch her parents, the boy coughed and groaned.
Relieved, she put Coco down, dropped back to her knees at his side and touched
his shoulder again. “Wake up.”

His eyes popped open. A blue
green gaze, the color of the ocean stared up at her.

He coughed again and sat up.
“Yes—yes I think so.”

His hand went to his head, and
he winced a little as his fingertips grazed the open wound. They came away with
blood on their tips. “Xav,” he said, wiping the blood onto his dark shorts.

“Hi Xav, that’s a funny name.”
She tilted her head and stared at him. “What happened to you? Did you almost
drown or something?”

He smiled up at her.

She blinked, then blushed. He
was pretty and made her stomach feel funny.

“Something like that.” He
glanced around. “Do you know where I am?”

“Don’t you?” she asked,
confused by his question.

“Well, you’re in South Nags
Head, North Carolina.” She pointed over her shoulder. “We have a beach house
here this summer. Are you staying in a beach house, too?”

“No.” He stood up and gazed out
at the ocean.

The little girl stood, too. He
towered over her, but everybody did. She glanced at the water to see what held
his attention. “Look! Dolphins.” She pointed in the direction they were both
already watching.

The dolphins jumped out of the
water, clicking and wheezing, like they were trying to talk to them.

Coco ran back and forth just
out of reach of the tide, barking as if answering them back.

“She’s funny.” He turned his
gaze to her.

With his back to the sun, she
needed to squint to look into his face. She put her hand over her eyes to see
him better.

“Well, okay, can you come back
tomorrow, so we can play? Me and my family will be here for two whole weeks.”
She liked this strange boy.

“Well, try.” The little girl
felt lonely. The other family with children her age wouldn’t get there for a
few days, so she had no one around to play with except her dog. She stood on
her toes and hugged him. “Friends.” She barely reached his chest.

He hugged her back. “Friends,”
he agreed. He turned and ran into the water until it reached his waist. Diving
in, he kicked hard and swam out to the dolphins. When he reached them, he
turned to wave to the girl left standing on the sand. Then, as one, he and the
dolphins leapt up just above the water and dove beneath the surface.

The child stood there for some
time, but didn’t see either the boy or the dolphins surface again. She returned
with Coco every morning and afternoon for the two weeks they were in the Outer
Banks…While she saw dolphins from time to time, the boy never came back.

“These damn patches don’t even
work, what a rip-off.” Cori Daniels turned over, rolled out of the narrow cabin
bed, and hugging the walls, barely made it to the bathroom, but nothing
remained in her stomach to heave out. Not even air.

Was it just five months ago,
they celebrated her winning that stupid radio contest? She’d never survive the
ten day cruise. The first forty-eight hours weren’t even over and she hadn’t
been able to leave the cabin. Hell, she couldn’t even go far from their
bathroom. Now, she knew why some called it the head: because your head was
always leaning over the bowl.

“Cori, honey,” Desiree called,
hovering somewhere behind her. “Here’s some ginger ale and crackers. The nurse
said it’ll help settle your stomach and you’ll be just fine in a day or so.”

“I hate you, you know that,”
she groaned. A cool towel suddenly pressed against her forehead and it went a
long way to help relieve her bad mood, as well as her pounding head. She didn’t
hate her best friend and partner in crime, not really. But damn, why couldn’t
Des be sick and she be the one meeting the handsome hunks they’d seen when they’d
boarded?
Damn, damn, damn!
But to be
fair, Des hadn’t met anyone either, taking care of her most of the time. “Okay,
no I don’t.”

“Xavior, are you sure about
this?”

“No, Aaron. I am not, but what
choice do we have? The sea witch foretold my bride would be on this boat.”

“But Xavior, a landwalker?”
Aaron shook his head, making his blond mane shift across his shoulders. “No.
It’s a lie I tell you, a trick. Besides, how could you have previously met her,
and how could she live in our world?”

“The witch cannot lie to me.
Not when faced with my trident. She spoke truth, and if the woman is my bride
and the chair accepts her, she would be able to live in both worlds as we do.
You know this.”

“But worth it.” Xavior grinned.

“Yes. It is worth all to find
our mates.”

“As far as having met her
before, I have no idea.” He shrugged. “I’ve been on land many times in the last
twenty years, so who knows when I met her.”

Their people were long-lived
and very youthful looking, his line more than most. The males and females grew
until puberty, then stopped aging until the men met their brides or the women
their mates. Most of his race were fully mated or almost, thank Poseidon.
Otherwise, they’d be a race of irrational teenagers with raging hormones and irrational
thoughts, not that they didn’t have a fair share of that population.

On the bright side, they were
impotent with no sexual drive until they began to age again, which didn’t
happen until they were in the proximity of a potential mate. Then, they were
like randy teens, but their bride was the only one who could bring the male of
their kind to orgasm, and only a mate could impregnate his female. So, the men
searched very enthusiastically for that bride.

For three hundred years, he’d
appeared as the equivalent of a human fourteen-year-old, a long time even for
one of the sea people. That is until ten or twelve years ago, when he’d begun
to age again, which meant at some point, he’d met his bride. Now at his prime,
the aging process had stopped; his internal senses told him so. Which meant, as
prince and heir to the sea throne he was unlike others of his kind—he
was now under a time limit.

He needed to claim his
inheritance before the next full moon rose above the waters. In order to do
that, he needed to find his queen. If he didn’t, he’d be forever banned from
doing so, and the next in line could take the throne. Making him the first of
Poseidon’s first born line to lose it. Even the children of the waves had
limits, and since Poseidon already abandoned his throne, they’d waited long
enough for Xavier, the heir apparent, to come of age. His people needed a king
to unite and lead them. There was too much fighting among the tribes, too many
of them abandoning the depths. Only a king could put a stop to it.