Secrets and Lies: He's a Bad Boy\He's Just a Cowboy 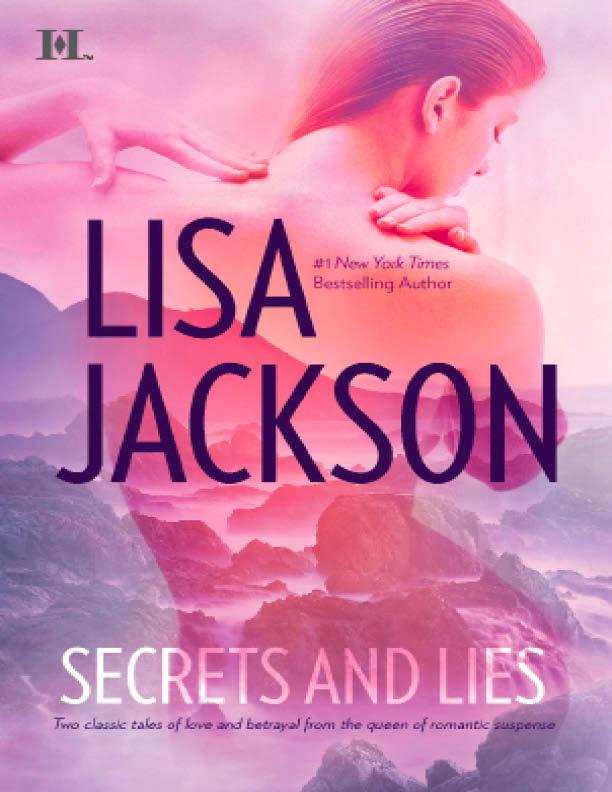 Some secrets are too painful to stay buried...

Famous criminal defense attorney Jackson Moore thought he had left his bad-boy past behind him—but his childhood sweetheart had different plans for him.

Rachelle Tremont thought she could forget her tragic small-town history by writing about it in her nationally syndicated column. She hadn’t counted on Jackson Moore’s return, or on the way her blood ran hot at the sight of him. He was determined to discover the town’s secrets with Rachelle—and in doing so, uncover some secrets of their own....

For six agonizing years Heather Tremont Leonetti tried to make a lie of the breathless summer when rodeo rider Turner Brooks broke her innocence and branded her heart. But now only the truth could save her most precious, cherished memento.

Which meant she’d have to beg the help of the one man who could drive her to her knees—the proud, unforgiving loner she’d loved…the unforgettable cowboy who’d sired her son.

Deep down, doesn’t every woman love “bad boys”? How about “rich boys”? Well, and certainly “cowboys”?

I know I do, and I also love a reunion story, where lovers who were torn apart in the past have to face each other again. I believe that old sparks can be quickly ignited again, and
Secrets and Lies
is a book that proves my theory.

Years ago I wrote the Mavericks series, which was composed of
He’s a Bad Boy, He’s Just a Cowboy
and
He’s the Rich Boy,
all written for Silhouette Special Edition and all connected by The Legend of Whitefire Lake.

In
Secrets and Lies,
two of those stories,
He’s a Bad Boy
and
He’s Just a Cowboy,
come back to life again. You’ll get to meet “bad boy” Jackson Moore and Rachelle Tremont, the woman he’s never forgotten, no matter how hard he tried. Then there’s “cowboy” Turner Brooks, and Heather Tremont Leonetti, who had his love child. Their story is included. Let me tell you, the sparks fly when these people get together again!

I’m thrilled that HQN Books has repackaged some of my earlier novels, and I’m sure you’ll love the Mavericks of
Secrets and Lies!
Look for the third book of the Mavericks series in
Confessions,
coming soon from HQN. In that story you’ll meet Hayden Garreth IV (the rich boy) and the woman he could never forget, Nadine Warne.

If you’d like to find out more about
Secrets and Lies
as well as my other books, just visit me at www.lisajackson.com or my Facebook fan page!

T
HE WIND WAS BRISK,
cold for early summer, as it blew off the bay and crawled beneath the hem of Rachelle Tremont’s leather jacket. Rain began to fall from the leaden sky, and she hurried up the staircase leading to her apartment.

“Come on, come on,” she muttered under her breath when she couldn’t find her keys in her pockets. She rifled through her purse while rain dripped from an overflowing gutter and her black cat, Java, meowed loudly at her feet. “I’m trying,” she grumbled through chattering teeth as she found the key in a side pocket of her purse. The door stuck, as it always did in the rain, and she had to shoulder it open.

Finally she was inside, dripping on the faded gray carpet, her hands like ice. She should feel good, she told herself; she’d finally made a decision to get on with her life—confront the past so that she could face her future.

She plugged in the coffeemaker and, after leaving a dish of milk for Java, replayed the single message on her answering machine.

The voice on the machine belonged to her sister. “Rachelle? Rachelle, are you there?” Heather asked. “If you are, pick up and don’t give me some nonsense about deadlines or any of that guff… . Rachelle? Mom just called. She says you’re going back to Gold Creek…that you’re planning to rent the cottage! Are you crazy? Don’t you remember what happened there? Your life was practically ruined! For crying out loud, Rachelle, why would you go back?” A pause. “This doesn’t have anything to do with Jackson Moore, does it? Rachelle? Rachelle?” Another pause while Rachelle’s heartbeat thudded so loudly, she could hear it. “You call me,” Heather insisted, sounding worried. “Before you take off on some trip that’s going to be emotional suicide, you call me…! Listen, Rachelle, you’re supposed to be the levelheaded one. And you told me once if you ever thought about doing anything as insane as returning to that town that I was supposed to take a gun and shoot you. Remember? Well, consider yourself shot! Don’t go and do something stupid! And just forget Jackson! You hear? Forget him. He’s bad news. Always was. Always will be… . I wish you were home so we could straighten this out,” Heather added anxiously. “Okay, you call me. Okay?”

Finally a click and a beep and Rachelle let out her breath. Her hands were trembling as she poured herself a cup of coffee. Just the mention of Jackson could shake her up. It had been twelve years. Twelve years! How could she still be so affected by a man who had turned his back on her when she’d been his only friend in a town that had branded him and wanted him hung from the tallest tree?

The answer was simple—and complicated. Despite her down-to-earth nature, Rachelle had once had a romantic side, a part of her personality that had believed in fairy tales and castles and knights on white chargers. And bad boys? Hadn’t she believed in the myth of the bad boy with the heart of gold? Well, Jackson Moore had killed that fantasy, which, all things considered, was probably for the best.

She shrugged out of her jacket and draped it over the cane-back kitchen chair. Water dripped from the sleeves to the floor, but she didn’t care. She considered calling Heather, but decided against it. Why have an argument with her younger sister? She could picture Heather, blond hair neatly cut, silk pants and matching top, perfect smile. One of San Francisco’s elite, or she had been, during her marriage to Dennis Leonetti, a rich man whose father owned the Bank of The Greater Bay. Now Heather, divorced and a single mother, was trying to make her own living by converting the art she’d dabbled in for years into a career. She’d bought a loft, studio and gallery not far from Ghirardelli Square.

Heather had enough problems. She didn’t need to worry about her older sister—the confirmed career woman, the reporter who was always championing the cause of the underdog and who thought nothing of storming into the office of any public official for a quote.

The reporter who still quaked at the mention of a man she hadn’t seen for over a decade.

Rachelle glanced at the cluttered kitchen table and the manila envelope that contained a copy of the article she’d already left with her editor at the
San Francisco Herald.
Her first article explained that for the next ten weeks her syndicated column would be written from Gold Creek, California, the town where she’d grown up. Her introductory column in the series
Return to Gold Creek
would appear in newspapers across the country tomorrow. And her editor, Marcy Dupont, expected more—a lot more. Marcy wanted an interview, by telephone of course, with Jackson Moore. That request would probably prove impossible.

Frowning thoughtfully to herself, Rachelle kicked off her sodden boots. Her socks were waterlogged, and she yanked them off before tossing the wet hosiery into the bathroom sink. Padding barefoot into her single bedroom, she finger-combed her tangled hair and spent the next ten minutes braiding the wet strands into a single auburn plait that swung past her shoulders as she walked.

She’d decided to go back to Gold Creek and, come hell or high water, she was going. No amount of talking from Heather was going to change things. She’d already worked out the details with her job; Marcy was all for a column of self-examination about herself and the town in which she’d grown up. Rachelle bit her lower lip and felt a tiny jab of guilt that she’d have to draw Jackson into this. Too bad. Especially now, when she was over him—completely over him.

Now she had David—kind, understanding David. Hadn’t he insisted she return to “find herself” or some such sixties mumbo jumbo? What he’d really meant was that he wanted her to be able to lock away the past once and for all and return to him. He wanted her to move in with him, marry him, and accept his teenage daughters as her stepchildren. And he wanted her to be fulfilled. Because he didn’t want to start another family—not at the age of forty-five. David was sixteen years older than Rachelle, which wasn’t all that much, but he’d done his fatherly bit and he wanted a new wife with no hang-ups about starting a family. A new, younger wife who would look good at company parties and cook his dinners for him, yet still have an interesting, vital career of her own. Rachelle filled the bill. Except she had a few problems of her own to work out first.

So she was returning to Gold Creek. For David. For her job. For herself.

Not in a million years.

All she had to do now was pack. But she stared at her closet, her throat dry. Her stomach tightened into a hard knot when she spied the yearbook of Tyler High, and next to it a scrapbook filled with yellowed, time-worn pages from her youth.

Knowing she was making a mistake that could cost her all of her hard-fought independence, she crossed to the closet, yanked out the scrapbook and slid to the floor where she sat cross-legged on the braided rug. One knee poked out of the hole in her jeans as she slowly opened the dusty volume and stared at the aged articles from the
Gold Creek Clarion.
The pictures were grainy, brittle with time, but Jackson Moore seemed as real now as he had then. He stared at the camera as if it were an enemy.

The Beholder by Ivan Amberlake
Wifey 4 Life by Kiki Swinson
The Dark's Mistress (The Saint-Pierres) by Hauf, Michele
Iron Goddess by Dharma Kelleher
A Thousand Pardons by Jonathan Dee
Lifelong Affair by Carole Mortimer
Shadow Seed by Rodriguez, Jose
Not Just a Cowboy (Texas Rescue) by Caro Carson
Better Than Chance by Hayes, Lane
The Senator’s Daughter by Christine Carroll
Our partner