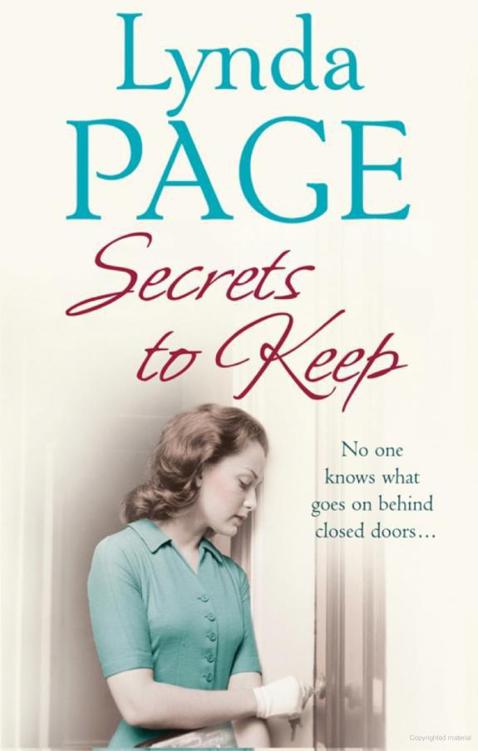 Lynda Page's latest novel is an emotional rollercoaster of hardship and heartache. When a new doctor arrives in the backstreets of Leicester, the locals are outraged by his rudeness and hostility. One of the first to encounter his abruptness is young Aidy Nelson but when she gets the job as his secretary she slowly gets to know him and realises that behind his gruff manner lurks a man with a sorrowful past and secrets he's determined to keep.

Lynda Page was born and brought up in Leicester. The eldest of four daughters, she left home at seventeen and has had a wide variety of office jobs. She lives in a village near Leicester.

‘When Lynda Page pulls the heart-strings, you won’t fail to be moved’
Northern Echo

The right of Lynda Page to be identified as the Author of the Work has been asserted by her in accordance with the Copyright, Designs and Patents Act 1988.

Many people scoff at the idea of love at first sight, but I am living proof that it can happen. I fell for you hook, line and sinker the instant I set eyes on you. In fact, I was the first to see you as you arrived to join our family. I promise to love, cherish and nurture you, to do my utmost to be the best grandmother I can be and (don’t tell your mother and father) to spoil you rotten.

To Dr Aubrey Stewart and John Grenfell. Two wonderful gentlemen who dedicate their time to running the Leicester Royal Infirmary Museum and who both eagerly gave me their expert knowledge to furnish me with all the medical facts I required, and more besides, to write an accurate account of how the medical profession operated in the 1930s.

T
he man was so angry his jugular vein looked to be in danger of bursting.

Banging his fist hard on the table until it caused a battered tin cup to topple off, he yelled, ‘Now you listen ’ere. That fuckin’ wife of mine is n’ote but a lazy cow who’d do anything for a day in bed. It’s just a bad cold she’s got. I’ve got one, worse than she has, but do I take to my bed? No, I suffer in silence and get on with it. If anyone needs a bloody rest, it’s me – from her constant whining, not to mention from
her
blasted kids always bickering. No one ’cept me had any business calling you in, least of all our nosy bleeder of a neighbour.’

He paused long enough to give a hacking cough, spitting out phlegm which fizzled in the dying embers in the grate. Turning back to the man he was verbally attacking, he continued, ‘As yer can see, we don’t exactly live like kings, so where the hell am I expected
suddenly to find the money for someone to take care of us while the wife takes her
holiday
?’

Through eyes the turquoise green of glacial meltwater, the man to whom this furious tirade was being addressed flashed a quick glance over the speaker’s shoulder. Seven ragged-looking children, ranging in age from ten months to eight years, who until their father had appeared on the scene minutes ago had been noisily making their presence known, were now all silently clinging together in one corner, looking fearfully back at him. In the fireplace a large, blackened cauldron-like pot was hanging over the dying flames. There were chunks of things swimming in an unappetising-looking mixture, cooling now as the coals beneath dwindled, not having been replenished since the woman of the house had collapsed earlier that day.

Fighting to quash the nausea that was creeping through him, he ignored the competing odours of stale cooking, soiled nappies, unwashed bodies and general decay, and stole a glance around the rest of the miserable room; at the few pieces of rickety furniture sitting on bare floorboards, large patches of mildew patterning the damp, dingy distempered brick walls, yellowing, holed net curtains wafting in the draught swirling through the rotting window frames. He thought too of the sick woman upstairs, lying desperately ill on a filthy, sheetless, bug-infested flock
mattress, a threadbare Army greatcoat all there was to cover her.

Her chances of recovery were slim, though had the more affluent, charitable folks of Leicester not found it within themselves to fund a hospital for the free care of the very poorest in the city, even that slim chance would have been denied her. But if her brute of a husband wasn’t going to sanction her admission to the General Hospital, for his own selfish reasons, then the doctor might as well not waste any more of his precious time and sign her death certificate now.

He brought his attention back to the emaciated, shabbily dressed figure before him, his pallor ingrained with dirt, what teeth he had left crooked and blackened with rot, like loose tombstones.

‘You get the money to pay for help from the same place as you find it for your daily supply of drink and cigarettes, I presume,’ he told the sick woman’s husband impassively.

Face flaming with rage, and clenching one fist, Cedric Simmons bellowed back, ‘You what? How I spend my brass is none of your business, you selfrighteous …’

Before he could say another word he was cut short by an even-toned: ‘Mr Simmons, you may intimidate your family but you don’t me, in anyway whatsoever. It’s very apparent from just looking at your
wife and children where the majority of the money that comes into this house goes, and it’s not on their welfare, is it? If I’d been called in when it was first apparent your wife was suffering from much more than a cold, it’s probable you wouldn’t now be looking to pay someone to care for yourself and your children. If Mrs Simmons doesn’t receive immediate hospital treatment, she’ll definitely die in a matter of a day or so. Now, do I go back to my surgery and arrange for an ambulance to call, or leave it to you to arrange a funeral?’

Whatever Cedric’s response had been going to be, it was halted by the arrival of a thick-set, middleaged woman who appeared in the doorway to the stairs. She was dressed in a threadbare black skirt and faded ecru twill blouse which strained over her matronly bosom. She had a faded wrap-around apron over the top, and her greying hair was scraped into a tight bun at the back of her head.

She was looking very anxious as she blurted, ‘That amb’lance is tekin’ its time, in’t it? Win’s breathing’s got worse since you came back down here, Doctor. I’m really worried she won’t make it if we don’t get her to the hospital soon.’

He responded matter-of-factly, ‘And I am doing my best to arrange that, Madam.’

Fanny Cook eyed him strangely for a moment as he didn’t appear to be doing anything that remotely
resembled urgently summoning an ambulance. She then looked at Cedric and the truth of the situation registered. Face screwed up in angry disbelief, she challenged him, ‘Am I to understand the amb’lance hasn’t bin called yet ’cos
you
…’ she wagged one fat fist at Cedric ‘… ain’t happy about the fact yer might have ter bung someone a few shillings to tek care of you and the kids while Win’s getting better?’

She spun round to face the children then and ordered them, ‘Go next door and tell my Rosie to get you each a slice of bread and dripping, and some milk for the bab.’

They didn’t need telling twice. The eldest scooped up the baby and fled. Once they were all out of earshot, Fanny shook her head in disgust at the children’s father. ‘What I have to say to you ain’t for your kiddies’ ears.’

Fixing him with her eyes, she blasted him. ‘I’ve always kept me gob shut ’cos I knew Winnie would suffer at your hands if I spoke me thoughts aloud, but enough is enough. You’ve always put yourself before your family, Cedric Simmons. My old man insists on a pint on his way home of an evening, to wash the dust from his throat after his shift in that filthy factory, but he wouldn’t put that, or his betting money for that matter, above food on his family’s table. Unlike you.

‘You might think yer clever ’cos you only thump
Winnie and the kiddies where it doesn’t show, but don’t think for a minute we neighbours ain’t aware you’re handy with your fists. Win and the kids live in terror of you! They’d have starved more times than I can remember if me and the other neighbours hadn’t fed ’em with what we could spare, and helped clothe the kids with our lots’ cast-offs. You’re just a bloody bully, and selfish to the core! Words like that ain’t strong enough to describe you, in my opinion, but what you’re doing now amounts to murder and I won’t stand by this time and say n’ote about that.

Sins of the Father by Jamie Canosa
01. Spirits of Flux and Anchor by Jack L. Chalker
Dying Days 3 by Armand Rosamilia
Finding Alice by Melody Carlson
Undercover Bride by Margaret Brownley
Under the Lights by Mari Carr
I Thee Wed by Celeste Bradley
A Scandalous Adventure by Lillian Marek
The Samurai Inheritance by James Douglas
Flying by Carrie Jones
Our partner