Read Secrets to the Grave Online

Secrets to the Grave 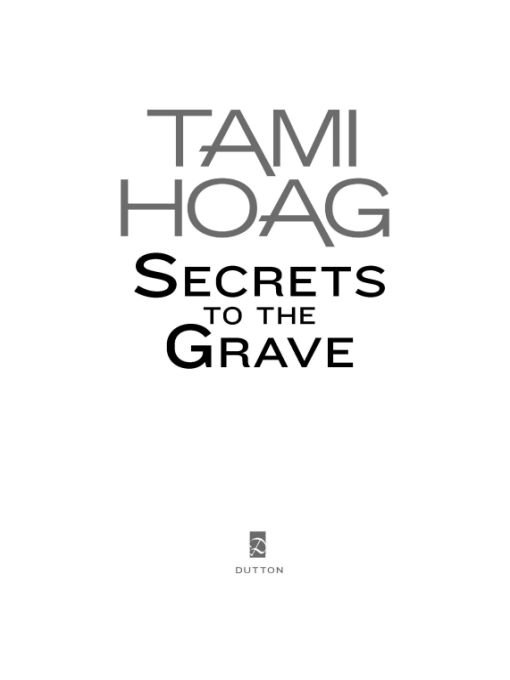 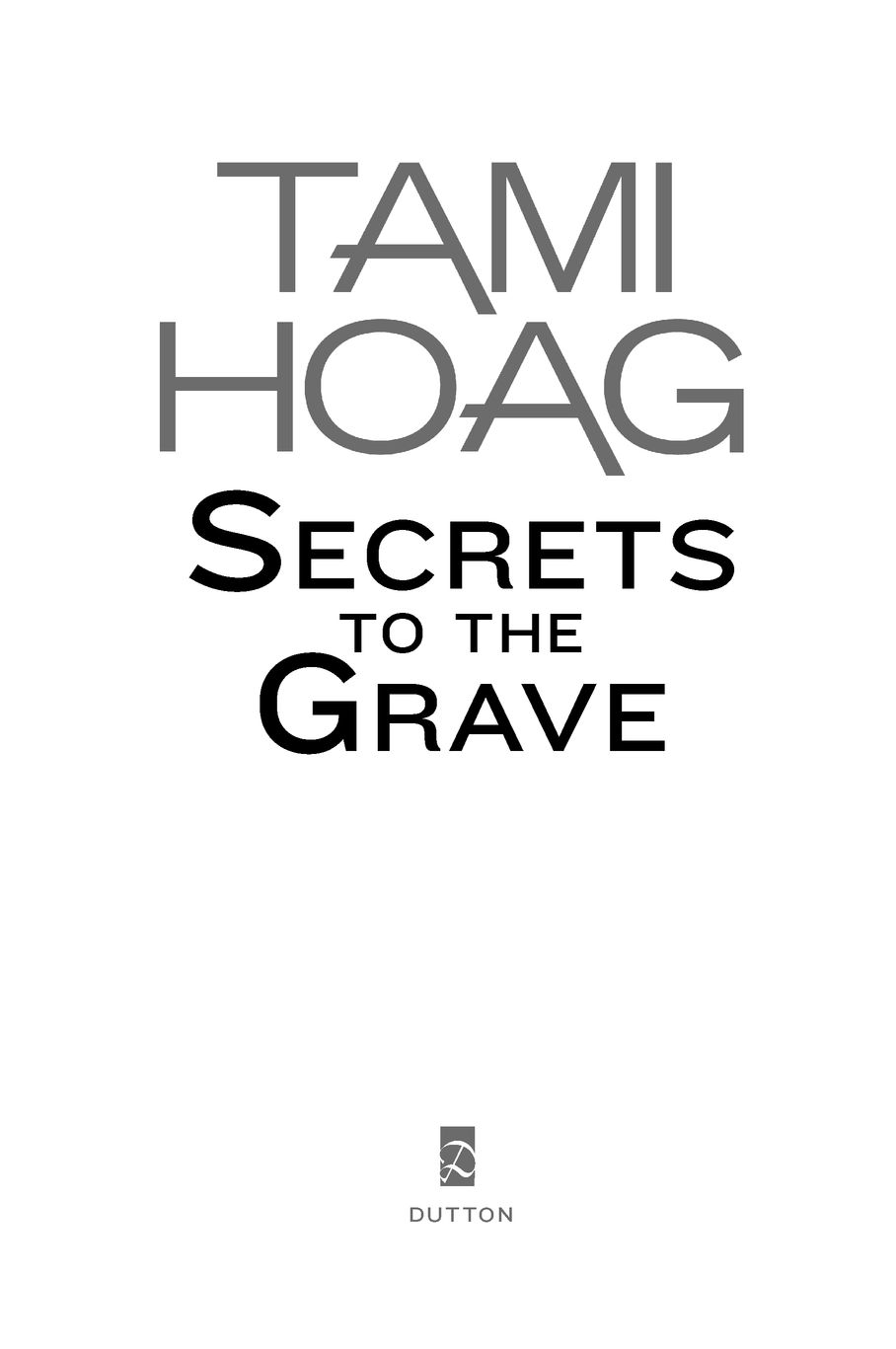 REGISTERED TRADEMARK—MARCA REGISTRADA
LIBRARY OF CONGRESS CATALOGING-IN-PUBLICATION DATA
Hoag, Tami.
Secrets to the grave / by Tami Hoag.
p. cm.
eISBN : 978-1-101-44599-0
1. Single mothers—Crimes against—Fiction. 2. Child witnesses—Fiction. I. Title.
PS3558.O333S43 2010
813’.54—dc22
2010039724
PUBLISHER’S NOTE
This book is a work of fiction. Names, characters, places, and incidents either are the product of the author’s imagination or are used fictitiously, and any resemblance to actual persons, living or dead, business establishments, events, or locales is entirely coincidental.
Without limiting the rights under copyright reserved above, no part of this publication may be reproduced, stored in or introduced into a retrieval system, or transmitted, in any form, or by any means (electronic, mechanical, photocopying, recording, or otherwise), without the prior written permission of both the copyright owner and the above publisher of this book.
The scanning, uploading, and distribution of this book via the Internet or via any other means without the permission of the publisher is illegal and punishable by law. Please purchase only authorized electronic editions, and do not participate in or encourage electronic piracy of copyrighted materials. Your support of the author’s rights is appreciated.

With thanks and appreciation to Brian Tart, Ben Sevier, and all the team at Dutton.
Thanks for understanding what I do and how I do it.
AUTHOR’S NOTE
1986. Ronald Reagan was in his second term as president. On January 28, the space shuttle
Challenger
disintegrated seventy-three seconds after its launch, killing all seven astronauts aboard, including teacher Christa McAuliffe.
Out of Africa
won the Oscar for best picture. A mishandled safety test at the Chernobyl Nuclear Power Plant in the Ukranian SSR, Soviet Union, killed more than 4,000 people and caused 350,000 to be forcibly resettled away from the area. The New York Mets won the World Series, defeating the Boston Red Sox in seven games. The Bangles had a number one worldwide hit with “Walk Like an Egyptian.”
It was a year of big hair, big shoulder pads, and spandex.
In 1986, DNA science was still in its infancy with regards to law enforcement and had yet to be presented as evidence in a court of law. Investigators with foresight were holding on to evidence obtained at crime scenes and from crime victims, waiting for the science to advance enough to help them convict killers and rapists.
In 1986, California’s organization for Court Appointed Special Advocates—CalCASA—was still a year away. Local CASA programs (which provide advocates for children to assist them in dealing with the courts and foster care system) existed but were still relatively few and far between.
In 1986, AIDS was only just becoming widely known as a killer of near epidemic proportions worldwide, and the gay community was under fire. In 1986, it was still considered scandalous for single women to become pregnant and to raise the child on their own. My, how times have changed.
At the end of 1986, I made the decision to put my best effort into becoming a published author the following year. My first book would be published in 1988, and I would purchase my first desktop computer—with black-and-white monitor—with my advance from that book.
When I sat down to the first book of this series,
Deeper Than the Dead,
it never occurred to me that I would be transporting readers to a simpler time. Nineteen eighty-five didn’t seem all that long ago to me. Then, one night at work an infomercial came on my television—for
Greatest Hits of the Eighties
. As I listened to the sampling of songs, smiling at the memories they evoked, I suddenly came to a shocking realization: Oh, my God, I’ve become nostalgic! I’m
old
!!
Once I finally accepted that stunning truth, I embraced my trip back in time while also gaining a renewed appreciation for the technology available to law enforcement—and to the rest of us—today.
1
November 1986
The house stood by itself back off the road in a field of dried golden grass, half hidden by spreading oaks. An amalgam of styles—part Spanish, part ranch—the once-white stucco building was weathered in a way that made it seem a part of the natural surroundings, as if it had grown up out of the earth and belonged there as much as any of the hundred-year-old trees.
The scene was a plein air painting, soft and impressionistic: the golden grass, the dark trees, bruise-purple mountains in the background, and the whisper-blue sky strewn with long, thin, pink-tinted clouds; the small white house with its old tile roof. On the other side of the mountains the sun had begun its descent toward the ocean. Here, the day seemed to have paused to admire its own perfection. Stillness held the landscape enraptured.
Nothing gave away a hint of what lay within the house.
The driveway was a path of dirt and crushed rock with grass and weeds sprouted up the middle like the mane of a wild pony. Falling-down fences the color of driftwood created the lane between two overgrown pastures that had once been home to cattle and horses.
A vintage Woody station wagon well past its glory days was parked at a casual angle near an open shed full of rusted farm equipment. An old Radio Flyer red wagon had been abandoned near the front porch with an orange tabby cat sitting in it, waiting for a ride. On the porch two kittens played peekaboo among overgrown pots of parched geraniums and kitchen herbs. One propped herself up on the screen door and peered into the house, then squeaked and leapt and dashed away, tail straight up in the air.
Inside the house nothing moved but flies.
A horrible still life had been staged on the Saltillo tile kitchen floor.
A woman lay dead, her hair spreading out around her head like a dark cloud. Her skin was the color of milk. Her lips had been painted as red as a rose—as red as her blood must have been as it drained from the wounds carved into her flesh.

The Lamplighter's Love by Delphine Dryden
The Pakistani Bride by Bapsi Sidhwa
One True Thing by Nicole Hayes
Between You & Me by Marisa Calin
Prince of Desire by Donna Grant
THE HUSBAND HUNTERS by LAING, LUCY
Far from Blind by S.J. Maylee
Everything Bad Is Good for You by Steven Johnson
The Grim Steeper: A Teapot Collector Mystery by Amanda Cooper
The Unfinished World by Amber Sparks
Our partner