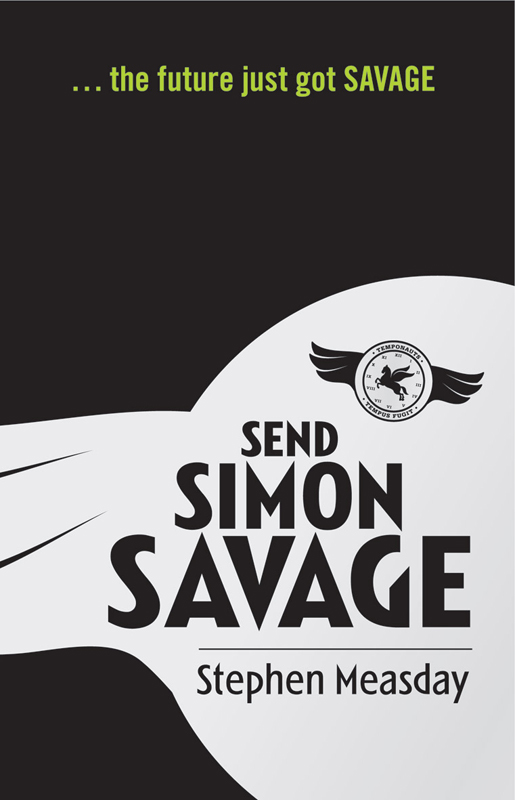 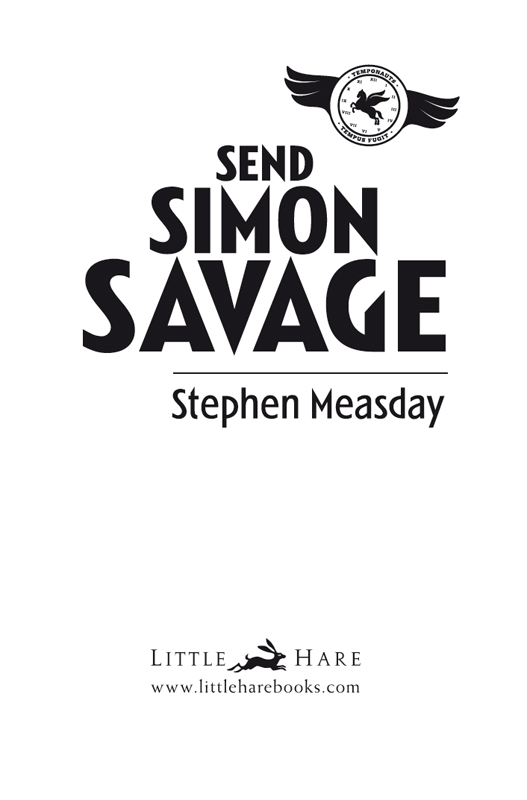 To
my sister and brother,
Pam Walker and Phillip Measday.
And the stories we have lived and told.
SM

The near future, Australia

S
imon spent a great Saturday body boarding with a few mates in rolling surf at the southern end of Bondi Beach. Late in the afternoon, he headed home.

The oily smell of fish and chips hung in the air as Simon walked along the strip past the crowded cafes. He darted across the road, weaving between slow moving cars, his mind fixed on the family’s usual Saturday night pig-out on fizz, pizza and cheesecake. Dodging another car, Simon jumped onto the footpath, turned up a side street, and nearly collided with old Mrs Price.

‘Simon, I’ve never seen so much fuss!’ she shouted after him. ‘What’s happening at your place?’

Two police cars were parked outside his house, their blue lights flashing. A group of people stood on the front porch.

He broke into a run. As he drew level with the house, his eleven-year-old sister, Lily, burst through the gate.

‘I know. He went to work,’ Simon replied.

Dad had been gone that morning when Simon got up. The night before he had promised to go surfing with Simon, but working at the weekends wasn’t unusual for him. Neither was leaving for work before dawn. It happened all the time.

‘She’s inside talking with the police. They won’t let me see her!’

Simon grabbed his sister’s hand, pushed through a huddle of nosy neighbours and leapt up the front steps of the house. A policeman stepped forward. ‘Where are you going?’

Simon kept moving through the front door. ‘Inside. We live here!’

The man stepped back and Simon dragged Lily down the hallway.

He heard voices in the living room and found her talking with a policewoman.

‘But you haven’t found his body,’ Simon’s mother said. ‘There’s always the chance that …’

‘Mrs Savage, we sent out a police launch,’ the policewoman replied, ‘but there was a choppy sea and a strong rip off that beach. Your husband may have been washed out to sea. I’m very sorry.’

‘Mum!’ Simon dropped onto the couch next to his mother. ‘What’s going on?’

It took the policewoman only a minute to tell Simon what he didn’t want to know—that his father’s clothes had been found on a deserted beach, about a hundred and twenty kilometres down the coast. And his car, with the keys in the ignition, was in a parking area nearby.

‘The local police found a trail of footsteps in the sand, from the car right down to the water,’ the policewoman said. ‘We believe he swam out to sea.’

Lily rushed to her mother’s side and hugged her.

‘Excuse me, are you Mrs Savage?’ a deep voice said.

Simon looked up as two men in dark suits entered the room and removed their Ray-Bans. All eyes turned to them. The taller of the two was a fit, tanned and dark-haired man in his forties. He flashed an official-looking badge and photo ID.

‘The name’s Cutler, and this is my colleague, Anderson,’ the man said, with a hint of an English accent. Then he repeated the question. ‘Are you Mrs Savage?’

The policewoman stood up. ‘Excuse me,’ she said. ‘Who are you, exactly?’

Cutler held up his badge again. ‘This is a Federal Government matter. Outside of your jurisdiction. We have a job to do, and quickly.’

The policewoman examined the distinctive metal badge and its embossed coat-of-arms. She nodded at Glenda and Simon. ‘He has the authority.’

‘Thank you,’ Cutler replied. ‘Mrs Savage, does your husband have a home office?’

‘Yes.’ Glenda looked towards the staircase at the far end of the room. ‘His study’s upstairs.’

‘My apologies, but we’ll have to conduct a search. This is a matter of national security.’ He nodded to the other man. ‘Anderson, would you take a look?’

‘On my way.’ Anderson moved briskly across the room and up the stairs.

Glenda took a handkerchief from her pocket and wiped the tears from her eyes. Then she looked back at Cutler with more composure. ‘What are you looking for?’

‘We’re here to find out if your husband … if Dr Savage left any research papers or a personal computer here in the house,’ Cutler said.

‘What’s that got to do with his disappearance?’ Glenda asked in alarm.

Simon jumped to his feet. ‘Look, Mum’s really upset. Dad keeps most of his stuff at his office in the city. Or out at the research laboratory.’

‘We’ll be certain to look there, too,’ Cutler said.

‘For what?’ Simon asked.

Then Simon noticed the man take something from his jacket pocket. It was black, the shape and size of a thick pen, and had a clear glass bubble at one end.

‘You’ll have to excuse me, but I need to scan everyone in the room,’ Cutler explained. ‘It will only take a few seconds.’

He held out the device and a thin blue beam scanned over Simon, Lily and Glenda’s heads and shoulders.

‘What is that thing?’ Simon asked.

‘A forensic testing device,’ Cutler replied calmly, putting it back in his pocket.

Anderson came back down the stairs. He shook his head.

‘That was quick,’ Cutler remarked.

‘Nothing up there of interest to us, sir,’ Anderson replied.

‘Well, thank you for seeing us, Mrs Savage,’ Cutler said. ‘We’re very sorry for your loss.’

Cutler nodded. Then the two men turned and left the room as quickly as they had arrived.

‘Who were those guys?’ Lily asked.

Simon went to the window and watched the men get into a black car. It drove to the end of the street, nosed its way back into the traffic on the main road, and was gone.

That night, Simon couldn’t sleep. Every now and then he heard some movement in his mother’s bedroom, heard her blowing her nose into another tissue. But it was his own restless thoughts that kept him awake. He tried to remember every word, every movement his father had made over the last few days. He tried to find a clue as to why he had disappeared in such a strange way. And he wondered what the sudden visit from Cutler and his offsider had meant. He got out of bed and crept quietly into his dad’s study.

Lily stood in the doorway, looking pale and frail in her pyjamas.

‘I’m checking things out,’ Simon said. ‘Like, why is it so tidy in here? Look, his books are all neat in the bookcases. The desk is all clear. Dad is never this tidy.’

‘It smells like Dad,’ Lily said. She shuffled closer to Simon.

Then, for the first time in ages, she wrapped her arms around him and held on tight. They stood like that for a long time as they stared at their father’s favourite possessions.

Dr Savage’s study was filled with thousands of books on science, botany, history and poetry. Many of the volumes were old and leather-bound. On the walls were framed pictures of weird flowers, like the Giant Rafflesia, which was three metres across and gave out a stink like rotten meat. A year ago, they had all gone to see one at the Botanic Gardens. And, along a dozen floor-to-ceiling shelves on the opposite wall, there were multicoloured jars of seeds and seed pods from hundreds of rare and not-so-rare plants. Collecting seeds was their dad’s obsession. ‘You’ve got to have a hobby,’ he had often said.

Simon looked at the row of family photos on the mantelpiece, which sat above the fireplace that his dad had so carefully stripped and restored to its original, unpainted woodwork. His eyes lingered on the one photo that showed his father in his surfing gear. Hale Savage was a well-built man, with a full black beard, bright blue eyes and a receding hairline above a high, intelligent-looking forehead.

‘He spends a lot of time in here,’ Simon said at last.

‘Always flat out, working on something,’ Lily replied.

‘Yeah, one of his big projects.’

In the last year Dad had often been tired, Simon remembered. And even a bit spaced out. Always going to his study and shutting the door. Wanting peace and quiet. But for what? Simon knew next to nothing about his father’s real work. He knew it involved the atomic structure of elements and chemical compounds, and that it was new, and groundbreaking. So cutting edge, he had once joked that he could only talk about it with himself.

‘So it’s the same when he comes back?’ Lily asked.

The Man Who Left Too Soon: The Life and Works of Stieg Larsson by Barry Forshaw
Learning to Walk, a City Hospital Novel by Zachary, Drew
Rex by Beth Michele
Three Filipino Women by F. Sionil Jose
Thaw (Detective Ellie MacIntosh) by Watterson, Kate
Mistweavers 01 - Enchanted No More by Robin D Owens
Anne Barbour by A Dangerous Charade
Silver Bay by Jojo Moyes
Diagnosis: Danger by Marie Ferrarella
The Spaces in Between by Chase Henderson
Our partner