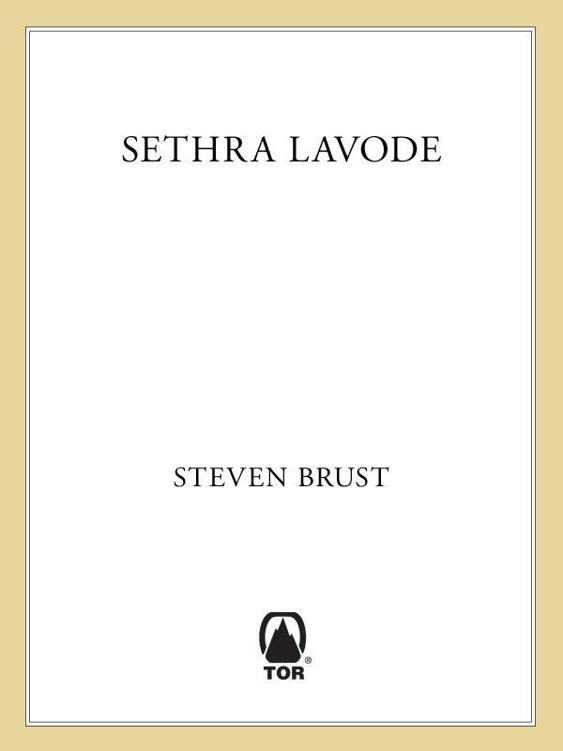 THE KHAAVREN ROMANCES
The Phoenix Guards
Five Hundred Years After
The Viscount of Adrilankha,
which comprises
The Paths of the Dead,
The Lord of Castle Black,
and
Sethra Lavode

To Reign in Hell
The Sun, the Moon, and the Stars
Cowboy Feng’s Space Bar and Grille
The Gypsy
(with Megan Lindholm)
Freedom and Necessity
(with Emma Bull)

BOOK THREE OF THE VISCOUNT OF ADRILANKHA

By Sir Paarfi of Roundwood
House of the Hawk
(His Arms, Seal, Lineage Block)

Presented, as Always,
To Marchioness Poorborn
With Gratitude and Affection

Chapter the One Hundredth

Chapter the One Hundred First

Chapter the One Hundred Second

Afterword ENCOUNTERS WITH PAARFI AND THE GODS

H
aving, on the occasion of introducing the previous volume of this history, said all that needs to be said concerning the wisdom, or, rather, the lack of wisdom, of dividing a story into sections, we do not feel the need to repeat ourselves. That is, all of those who have read the previous volume understand our objections to making such necessarily arbitrary breaks in what was meant to be a single, unified text; and those who have not read the previous volumes will, without our having to say anything, quickly come to understand. However, in the course of preparing this summary, we came to the decision to do something that, so far as we know, has never been done in the history of letters—a daring step that we have chosen to take out of a sense of duty to the reader.

Instead of confining these few pages to an explication of the events which are already known to those of our readers who have done us the courtesy of remaining with us throughout the several volumes of this history, we have chosen to break with an iron-bound tradition for such summaries, and include, toward the end of this section, new information—that is to say, information which will be of value to all readers.

It is possible that we will come under attack for such a departure from tradition from our brothers in letters, as well as those who feed upon literature in the same way as certain insects feed upon deceased animals; but in our desire to be of service to the reader, we are willing and even happy to brave these attacks.

That noted, we will at once pass on to explain, as laconically as possible, the circumstances at the beginning of this volume of our history, and how those circumstances developed.

We have been following, first of all, two Dragonlords: Morrolan
and Kâna. The latter of these has been attempting to expand his own holdings until they become, in effect, the Empire re-created. He achieved significant success, having started his projects around the fiftieth year after Adron’s Disaster, so that, by the time two hundreds of years had passed, nearly half of the area that was once the Empire was either under his control or threatened by his forces.

The other, Morrolan, the Count of Southmoor, had been raised in the East in ignorance, not only of his heritage, but, indeed, even of his race. Early in our history, we saw how he migrated from the East along with several hundreds of practitioners of the Eastern heathen magical arts. He journied to Dzur Mountain under the impression that he was owed tribute, Dzur Mountain being part of his ancestral holdings. He received an immensely powerful artifact from the Enchantress, though we are inclined to believe this was less in the nature of tribute than it was a gift of friendship, or perhaps the product of inspired foresight on the part of the enigmatic Sethra.

Another figure whom we have been following with great attention is, in fact, Sethra Lavode herself, the Enchantress of Dzur Mountain. Seeing that the true Phoenix Heir, Zerika, had reached a sufficient age, Sethra revealed to this worthy Zerika’s true name and destiny, and sent her, with the Viscount of Adrilankha, our old friend Tazendra, and a few others to the Paths of the Dead, where she managed to convince the Lords of Judgment to give her the Orb. She emerged from the Halls of Judgment, and so the Interregnum came to an end. This, the reader should understand, led directly to the Battle of Dzur Mountain, as this battle was, above all else, Kâna’s attempt to take the Orb by force. He concentrated his two armies, together numbering over seventy thousand strong, on Dzur Mountain, which he knew was Zerika’s destination. The attempt was defeated, largely thanks to Morrolan, as well as to assistance sent by Sethra Lavode, and a necromantic demon sent by the Lords of Judgment.

Fight For My Heart by T.S. Dooley
Kingdom: The Complete Series by Hannah, Steven William
Stranger in the Mirror [Shades of Heaven] (Soul Change Novel) by Tina Wainscott
Center Stage by Bernadette Marie
His Best Mistake by Kristi Gold
Evermore by Noël, Alyson
Radiance of Tomorrow by Ishmael Beah
Compendium by Alia Luria
Shifters Forever The Boxed Set Books 1 - 6 by Elle Thorne
The Gift of Christmas Present by Melody Carlson
Our partner