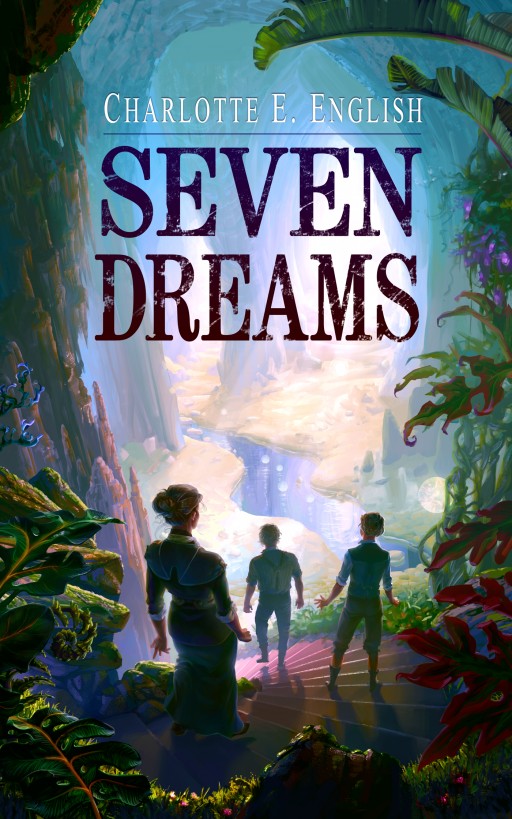 This ebook is
licensed for your personal enjoyment only. This ebook may not be
re-sold. 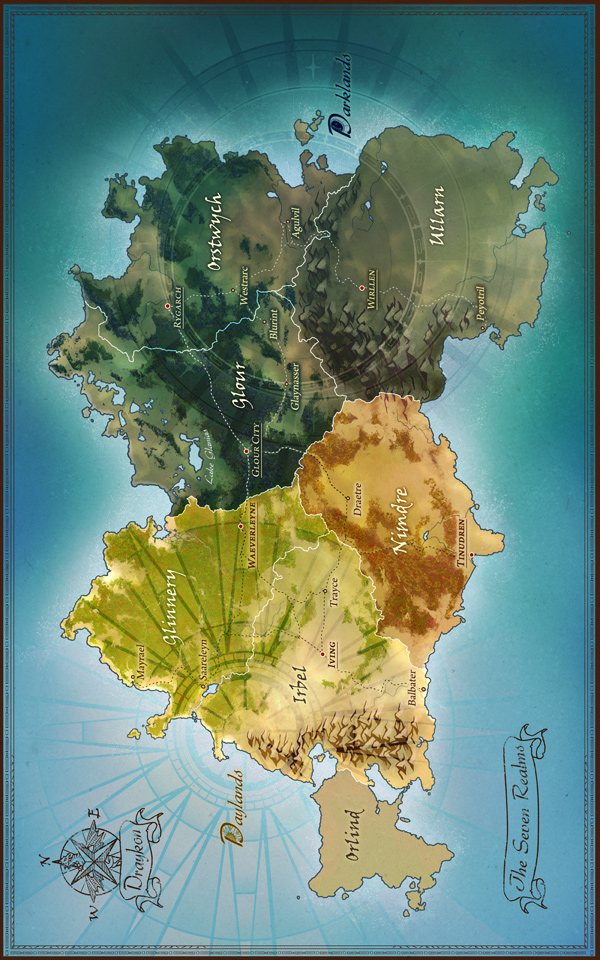 Few aristocrats
across the Seven Realms could match the importance of The Extremely
Honourable Lady Fenella Chartre. She was the highest of the high;
she knew it, and everybody else knew it too. Few would dare to
compete with her for the first place at table, at even the most
prestigious of dinner parties. No one would attempt to precede her
out of a room. She secured the attentions of the most prominent
gentleman present at any event, and without even trying. Her
importance gathered around her like a cloak; it was evident in her
every movement and gesture, every stitch of clothing that she wore,
and every coil of her smooth blonde hair.

Equal in
consequence was her brother, The Remarkably Honourable Edlen, Lord
Bastavere. Fortunately, his height was a perfect match to his
consequence, and permitted him to look down his long nose at the
lesser persons around him without much straining his lordship. They
made a handsome pair, everybody agreed, and had been enjoying the
very best of society for some years.

Today, they had
ventured beyond the borders of Irbel and explored into Nimdre.
Their extremely large, thoroughly imposing and almost impossibly
shiny carriage was making its way, at approximately half past seven
in the evening, along a quiet but reassuringly well-kept road in
northern Nimdre. It was drawn, of course, by a team of four
high-stepping, perfectly-matched nivvens, their pale grey scales
gleaming in the dying light. The destination of the noble pair was
the grand country home of Dame Halavere Morann, a lady of lesser
importance (naturally) but sufficient consequence to attract the
interest of their lady-and-lordships. Lady Fenella reclined at her
ease, gazing idly out at the darkening countryside as she reflected
with satisfaction upon the delights of prestige, importance and
superiority which she would enjoy at the Dame’s autumn ball. Her
brother wore the faintest hint of a scowl upon his noble features;
he had, perhaps, been obliged to forego some more eligible plan in
favour of this evening’s entertainment.

‘
What
a delight it shall be, I am sure!’ said Lady Fenella, in the
peachiest of plummy accents.

‘
A
dead bore, I should think,’ muttered his lordship in
reply.

‘
Pish,’ said Lady Fenella. ‘You will be able to ignore at least
half of the young ladies, and break the hearts of all the rest. You
always enjoy that.’

Lord Bastavere
ventured no response, and silence fell. Her ladyship resumed her
lazy scrutiny of the countryside, and her dark eyes began to drift
shut.

In the ordinary
way of things, nobody would be so foolish nor so bold as to
interfere with their lord-and-ladyship in any way whatsoever. Such
a grand, large carriage may, in the course of ordinary logic,
appear as a superb prize to adventurers, low-lifes and other such
persons as that, but such had never been the experience of this
noble pair. Their vehicles, their beasts, their garments and of
course they themselves radiated such imperturbability, such an
inflexible determination to carry all before them, that no one had
dared cross them in the smallest respect.

Until today. Lady
Fenella’s reverie was rudely interrupted by a sudden lurch of the
carriage as it swerved to one side, two of its wheels leaving the
road altogether. After that it came to an abrupt stop, and the
sounds of some loud altercation split the evening air.

Lady Fenella
thumped her hand upon the roof of the carriage and called, ‘Wendle!
What has occurred?’

Receiving no
response, and finding that the shouting continued unabated, her
ladyship stuck her head out of the window of the carriage. She
observed immediately that a desperate figure stood in the road not
far away. The man was wearing the customary uniform of general
depravity: dark colours, generally black, and a hooded cloak which
admirably shrouded his features. His attire may, perhaps, be a
little shabby, which suggested to her ladyship’s keen eye that he
was not the most successful of footpads. This impression was borne
out by the disreputable condition of the rapier he wielded, though
she could not deny that he wielded it with apparent skill. Her poor
coachman, Wendle, was held at bay by the vicious weavings of this
weapon as its wielder whipped it about in a tolerably threatening
manner. Her footman stood at a little distance, obviously preparing
to rush the swordsman in an attempt to disarm him.

‘
What
is it?’ said Lord Bastavere in a bored tone.

‘
Why,
it is a hold-up!’ replied his sister in accents of pure delight. ‘A
real one! Though I think it sadly disappointing. There is not even
a pistol, only the shabbiest of rapiers.’ She opened the door as
she spoke and jumped lightly down into the road, taking all due
care to hold the hem of her cerulean silk skirt out of the mud.
‘Hallo!’ she called, with a cheery smile. ‘Goodness, I have never
seen a real highwayman before! How very obliging of you to choose
our carriage for your exciting adventure.’

The hood-shrouded
head turned swiftly in her direction, and the highwayman’s
movements faltered in an instant of confusion. ‘Stay back!’ he
shouted hoarsely, and in heavily accented Nimdren. ‘I will kill
your coachmen if anyone approaches me!’

‘
Of
course, of course,’ said Lady Fenella soothingly. ‘It is our
valuables you want, I suppose? Shall you be absolutely obliged to
take my gown? It is undoubtedly fine, and would fetch a great price
I am sure, but I am so very fond of it.’ She stroked the beautiful
silk as she spoke, heaved a long sigh and began to unlace the
bodice.

This gambit
confused her assailant very much, for he stammered one or two
unintelligible things and blurted something wholly
incomprehensible. This proved opportunity enough; Lord Bastavere,
who had crept up upon the hapless highwayman unseen, grabbed him in
a rough bearhug and shook him until he dropped his weapon. Wendle
hastily retrieved it and took it well out of reach.

‘
Thank
you, my dear,’ said Lady Fenella, with the warmest of smiles for
her brother. ‘I would have been very sorry to part with my gown, I
admit. Though to save all of our lives, I would have done it!’ This
last was added in laudably tragic tones, paired with a brave smile
which quivered only the slightest bit.

Lord Bastavere
made no reply, busying himself with securing the hands of the
highwayman behind him. This appeared to cost him more effort than
might be expected, given the tall and powerful frame his lordship
enjoyed, and the shorter and undeniably thinner physique of the
other. A wrestling match occurred, which Lord Bastavere appeared,
incredibly, to be losing.

The reason for
this soon became clear. The highwayman’s body began to warp in the
oddest way, shimmering and flickering in an alarming fashion. His
strength appeared to grow by the second, and soon he threw off Lord
Bastavere altogether and ran some few steps away.

Moments later,
there stood not a man at all but a draykon. The beast was very
large indeed, and appeared all the larger when he reared up upon
his hind legs, flexing his vast, webbed wings and roaring a
challenge at the carriage and all associated with it. His scales
were a dark amber colour, a hue which her ladyship could not help
finding utterly charming. He bore besides a long snout,
vicious-looking teeth and wickedly curved, opalescent
claws.

‘
A
shapeshifter!’ cried Lady Fenella delightedly. ‘My word! Some say
one meets with them everywhere these days, but I did not previously
believe it to be true.’

The draykon
roared again, and showed himself to be tiresomely determined to
charge the carriage. This notion did not appeal very much to her
ladyship. With a short sigh, she removed a compact voice-box from a
pocket of her voluminous gown and spoke into it.

‘
Teyo,
we’re going to need you,’ she said crisply in the Irbellian tongue.
‘Be suitably terrifying.’

She put the
voice-box away once more, and smiled calmly at the draykon. The
creature was certainly enjoying his triumph: he amused himself with
a bit more thrashing and roaring, flapping his sail-like wings in a
manner he no doubt considered to be extremely alarming. In fact, it
was
rather alarming. If he chose to attack the carriage,
considerable damage would no doubt follow. But he did not, which
both relieved and puzzled her ladyship.

Lady Fenella and
her brother stood side-by-side, watching. After perhaps a minute,
Lady Fenella removed an attractive, bejewelled timepiece from
another pocket and glanced at it.

‘
What
could possibly be keeping him?’ she murmured.

‘
There
he is,’ replied his lordship, with a nod at the road behind
them.

Another draykon
came soaring down it, wings spread wide and mouth open in a
shattering roar. This beast was considerably larger than the first,
his scales gorgeously carmine in hue and his teeth and claws so
very impressive, Fenella always felt agreeably faint on beholding
them. The second draykon landed near to the first, the ground
shaking with the impact, and screamed so violently at his smaller
counterpart that the amber-coloured creature shuddered and
transformed at once back into a man.

‘
I
tried,’ the man muttered as he held up his hands.

‘
Thank
you, Teyo darling,’ said Fenella, with a sweet smile.

The carmine
draykon took off once more and soon disappeared into the
encroaching darkness, tipping his wings to Fenella as he
went.

‘
How
very exciting!’ Fenella said, approaching the hapless highwayman
with a conciliating smile. ‘Poor soul, am I right in thinking that
you are sadly short of employment opportunities? I may be able to
help you there!’

‘
Rena!’ hissed his lordship incomprehensibly. ‘We do
not
need another one!’

Lady Fenella
ignored this magnificently, too occupied in shepherding her fine
skirts over the muddy road to pay attention to her brother. ‘I
cannot stay for the present — a
most
pressing appointment to
attend to, I’m sure you understand — but if you can contrive to
remain here for an hour or two, we shall return for you with all
possible haste.’

Her quarry merely
stared blankly at her, his mouth hanging open a little.

‘
Quickly, quickly,’ said her ladyship, just a little testily.
‘I
did
say I have an appointment, did I not? And you have
already sadly delayed us.’

‘
What
kind of opportunity?’ said the highwayman at last.

‘
One
which would make the utmost use of your unusual talents,’ she
replied with a smile. ‘Oh, I can always find a use for another
shapeshifter. There can be no question about that! It would be of
the utmost usefulness. And then there is your talent for disguise.
I have seldom seen a woman masquerade more successfully as a
man.’

The Price of Everything by Eduardo Porter
East of the River by J. R. Roberts
Gotham: After Dark - The King Slayer by Dustin Brubaker
The Telling Error by Hannah, Sophie
We Were Young and Carefree by Laurent Fignon
Grave Robber for Hire by Cassandra L. Shaw
The Killer Book of Cold Cases by Tom Philbin
A Late Divorce by A. B. Yehoshua
Claim the Bear by T. S. Joyce
El asno de oro by Apuleyo
Our partner