Read Sex in the Title Online

Sex in the Title 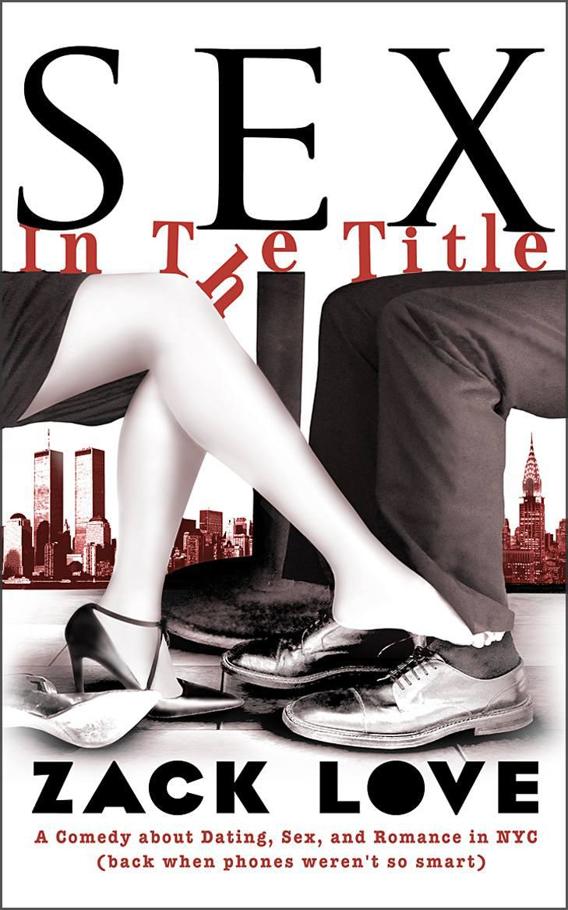 Sex In The Title

Dating, Sex, and Romance in NYC

(back when phones weren’t so smart)

This book is dedicated to the women of the world. Without you, there would be no muse.

Many thanks are owed to my test readers who reviewed the draft of this novel from 2003 and/or the polished and updated 2013 version: Eugenia, Steve, Carolina, Guy, Alex, Leah, Adam, Max, Donna, Sarah, Debbi, Victoria, Sophie, and Mia. Their feedback encouraged me to press forward with this book and often helped me to refine the manuscript.

My mother and her grandmother deserve special credit for instilling in me a respect for women – by their incredible life examples and their progressive thinking about the role of women in society. Providing a somewhat complementary perspective, my uncles were the first to show me the pleasures of pursuing women and, more importantly, the joy of having a woman in one’s life. And I am eternally grateful for my funny, kind, and wise sister, who has been a lifelong friend and advisor – on women and life in general.

I am also indebted to my male friends for the many years that they have served with honorable distinction as wingmen, strategists, therapists, and jesters. Our shared adventures – with the laughs and lessons learned – made it that much easier for this novel to come to life.

Lastly, I am especially grateful to every woman who ever went on a date with me – not only for tolerating me through a coffee (or more), but also for unwittingly providing some form of inspiration and/or insight into the ever elusive female psyche.

In case the title of this book somehow left any doubt, those who are easily offended by sexual content (or profanity) should probably avoid reading this novel. For everyone else, I salute your thicker skin and/or adventurousness, but a brief note about vulgarity and salacity is still warranted. The first and only time that I submitted this work to anyone in the publishing industry was back in 2003, after sharing it with about a dozen (mostly female) test readers who thought it was hilarious. The book was conditionally accepted by two reputable literary agents. One agent offered to represent the book if I made it more outlandishly raunchy, while the other agent asked me to do the exact opposite. Both agreed that – despite centering on male misadventures – the comedy avoided misogyny, which was key because most fiction readers in 2003 were female (and, in 2013, probably still are). But I was puzzled by what to do with the agents’ diametrically opposed comments.

In the end, rather than write three different versions of the same novel (more raunchy, less raunchy, and as is), I concluded that maybe I had struck the right balance, and so never bothered to do anything more with the book other than let it clutter up my hard drive. But over the years, my original test readers have encouraged me to publish this novel, and – for better or worse – I finally listened. Of course, there’s no pleasing everyone – as the reactions from those two agents illustrate. Nevertheless, if you’re one of those intrepid readers who haven’t been scared away yet, I genuinely think (and hope) that you’ll be more amused than offended.

It’s also worth commenting on the era depicted in this novel (1993 through the spring of 2001). Life seemed simpler in many ways – a conclusion produced by nearly all nostalgic reflections on prior decades. The Twin Towers still majestically decorated the Manhattan skyline and terrorism was rarely mentioned as a national concern. Calling the main phone number of a business generally still yielded a human being rather than five minutes of robot-voiced call options. Cell phones weren’t nearly as smart or ubiquitous as they are today, so people were as likely to write a phone number on a piece of paper as they were to enter it into a mobile phone. Au Bar was still a midtown watering hole for the rich and/or beautiful. Home video was still normally watched on VHS video tapes that were inserted into VCRs. Music was listened to on the go with a portable tape or CD player like the Walkman (a comically bulky device compared to today’s options). People carried paper calendars and address books. Computers were still using floppy discs. Smoking was allowed in New York restaurants, bars, and clubs. The city’s iconic yellow cabs still didn’t have interactive digital displays planted in front of the back seat for passengers to view or silence.

When I reread
Sex in the Title
for the first time, about a decade after writing it, such outdated details struck me as quaint relics from a narrative time capsule – and worth keeping because they help to define an era and the way people interacted in it. So, rather than revise the manuscript to replace outmoded technologies with smart phones, social media, and other features of 2013, I thought it best to preserve the original details and release the novel as a kind of period piece.

One final note about this book’s genre, which was surprisingly hard for me to pin down. The novel is arguably some form of “lad lit” because it’s mostly about five men, but it’s decidedly not “fratire” because, as mentioned, it’s not sexist and there is plenty of material about relationships (rather than just the sexual adventures and mishaps that are the focus of fratire). The book is definitely a comedy because it describes some extremely comical situations and often employs humor in descriptions and dialogue. But the work is also “literary” to the extent that it indulges social, psychological, and philosophical musings, and embraces a relatively advanced vocabulary. The story also has elements of romance in it. So maybe it’s a “literary romantic comedy.” Critics should have a field day with that one.

“Your employment is terminated. I’m out of the office this morning for meetings but you should pack up your belongings by 1 p.m. today. Your last pay check will arrive in the mail.”

That was the first email waiting for Evan on Monday morning, May 29, 2000, at the office where he had worked for the last two years. ChocaChump.com, the Internet-based, chocolate home delivery company, was another dot-com whose days were numbered. About six weeks earlier, the NASDAQ had dropped more than twenty-five percent from its peak in a single week.

The tech crash would continue, and Evan’s boss, a mercurial CEO who closely managed his twenty employees, grew increasingly bitter and difficult as his company faltered. After Evan read the email terminating his employment, he recalled their curt discussion from the previous Friday.

“Tell me the real reason why you were gone so long yesterday.”

“It’s the reason I gave you: my grandma had a bad fall and needed to be taken to the hospital. She called me for help because my parents were out of town.”

“You were gone for six hours.”

“Well, I had to go to Queens, where she lives. She needed a bunch of medical tests. And I wasn’t just going to leave her alone in the hospital. She’s a seventy-five-year old widow, so I had to be there to comfort her, and help her deal with insurance forms, doctors, etc.”

“Evan, everyone’s got problems. You don’t think I have a grandma who needs me just as much? Do you think our competitors care about our grandmas? It’s war out there! And we’re losing. Things used to be much better, but our operating budget no longer covers middle-of-the-day-grandma-emergencies.”

“But this is the first time I’ve ever done that. And I told you before I left that I had a family emergency. I can come in this weekend to make up for the lost work time.”

“Yes, please do that…I’ll have to think things over.”

As he promised, Evan spent much of his Saturday making up for his time away from the office. But there was no reversing a CEO desperate to trim his payroll.

Evan decided not to tell his girlfriend, Alexandra, about the fact that he was now unemployed. He would wait until after they returned from the Puerto Rican vacation that he had promised her a month ago, so that she could fully enjoy the experience, rather than feel guilty about the expense. The quality time with her would also help him to refocus on what really mattered to him, he thought.

Hoping for a fresh and positive start the morning after he was fired, Evan turned on his home laptop and purchased the airline tickets online. He then logged into his email account, so that he could forward the trip details to Alexandra. He noticed a new email from her in his inbox.

“Evan, Hun, sorry to tell you like this over email, but my plane’s leaving soon, so I don’t have time to do this in person. I’m leaving because I really need a break. From everything. Please don’t start wondering what this means or what you did wrong or anything, because you’ve been great. And that means that I have to use that trite line about how this isn’t about you. Because it really is about me…I’m twenty-four years old and I feel like I’m losing my youth suddenly. I just want to feel young and free for a few months. And I’m tired of this city. It’s making me old. The routine, the stress, the constant competition. I just need to escape for a while. I know we were supposed to go away one of these weekends, but I need more than a weekend. Much more. I decided – in a totally spur of the moment kind of way – to go to Australia. I know this all seems crazy and surprising, but that’s how these things go when you’re young. Without planning too much. I’ll be gone for six weeks. Maybe more. I’d ask you to wait for me, but that wouldn’t be fair to either of us. And I’m just not sure we’re right for each other, even though you’re really a wonderful guy…I think a clean break would be best for both of us. By the time you read this I’ll probably be on a plane. I’m really sorry, Evan, because I know this will hurt, even though that was never my intention. Call it a crazy and selfish impulse, but I just need this change right now. You’ve always been a sweetheart and I’ll totally miss you. Postcards will follow! Kisses, Alexandra.”

Evan stared at his laptop screen, in speechless disbelief.

For the lonely three months that followed, he struggled with the loss of a job he had mostly enjoyed, and a woman he had begun to love after almost five months of dating her.

On the few occasions when he could motivate himself to go out and act like a single man again, Evan crashed and burned with every woman he approached. Julia, a sexy, thirty-two-year-old therapist, was the only exception, but there were too many issues for that prospect to go anywhere. She couldn’t resist psychoanalyzing Evan whenever they met, which he soon realized was just her way of avoiding her own doldrums. Julia was clinically depressed and desperately seeking marriage and children (which Evan didn’t want for another four or five years), so his conscience forced him to nip things in the bud, even though she seemed open to a fling with him.

Thus, Evan continued stumbling along his losing streak, learning just how much being down is not particularly appealing to anyone – especially the attractive women of New York City, clad in their heels or hipster boots, looking for a good time.